I live for love cheese, so you can imagine my surprise and delight when I found out that there was a highly recommended fromagerie (called Artisanal) only a couple blocks from the hotel were Mike and I were staying in New York City.  The instant I found out, I called to see if they could squeeze us in, and we were able to go for a very late lunch/early dinner that same day! 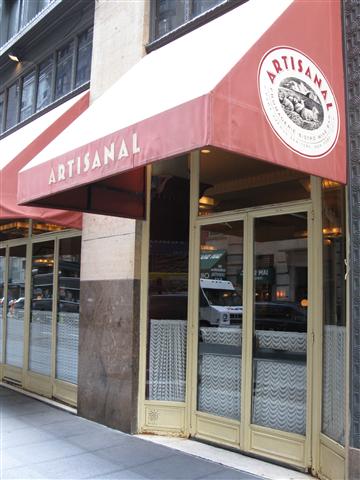 Now before I continue, I have to tell you that Mike is not a lover of cheese.  He will eat some cheeses – four kinds, to be exact:  Syrian twisted cheese called shalal (which tastes similar to mozzarella but is much saltier), goat cheese, Babybel mini cheese rounds, and mozzarella (but only if it is on pizza).  Given the pungent smell that fromageries are known for having, it was a real sacrifice for him to agree to dine there (I have to say though, the smell was not too bad at this one…only mildly pungent which was a pleasant surprise, especially considering it was such a hot and humid day).  Anyway, being able to endure the pungent smell of cheese for someone else is what I call true love…and for that I am eternally grateful (thank you baby!).  Luckily, in addition to being a fromagerie, Artisanal is also a bistro with a pretty extensive menu and even as picky an eater as Mike is, he was happy with the food choices. 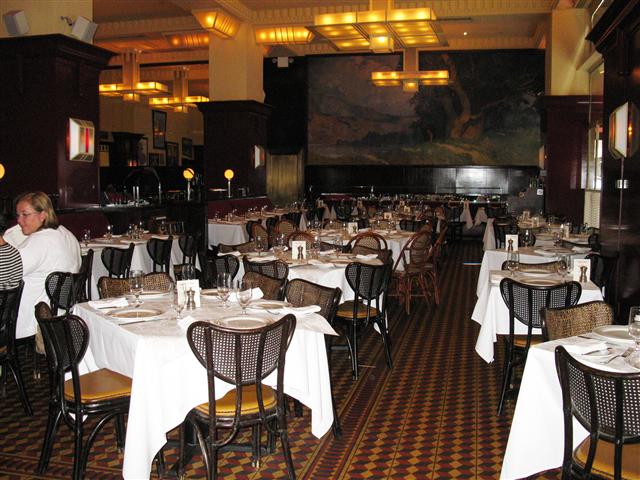 We had reservations for 5:30 PM and we were seated immediately when we got there.  The restaurant, which was almost empty when we arrived, was just about completely filled up with patrons within the hour.  Our waiter’s name was Antonio and he was wonderful!  He was from Portugal but had spent a decade living in Paris and was very knowledgeable about the menu.  He made some excellent food recommendations for us. 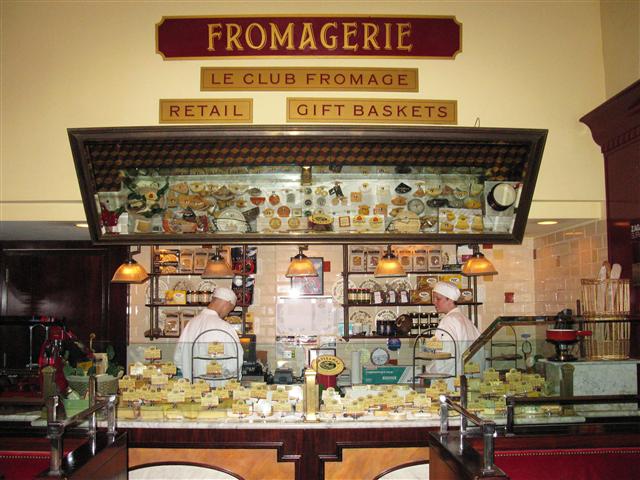 To start, we ordered the highly acclaimed gougères.  They were perfect – hot, light, and airy with a slightly nutty flavor from the gruyère.  Even Mike enjoyed them (so maybe I can add gruyère to the list of cheese he likes)!  :) 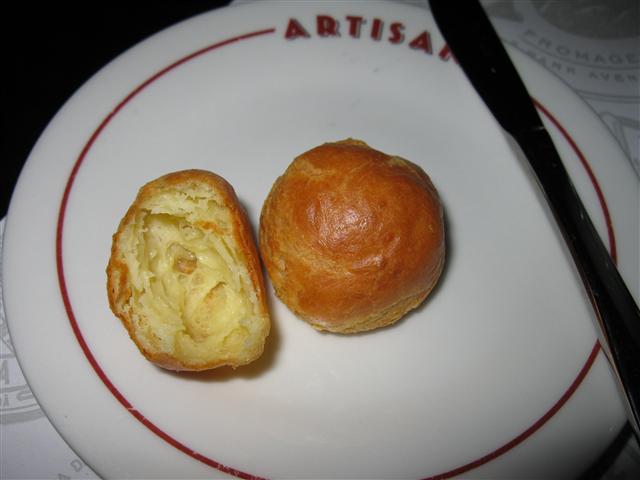 Right after ordering gougères, we were brought a huge basket of bread and butter.  The bread was delicious and the selection was amazing – there was country white boule (which had a sourdough-y flavor), rye boule, sliced baguette, and walnut bread (which was slightly sweet). 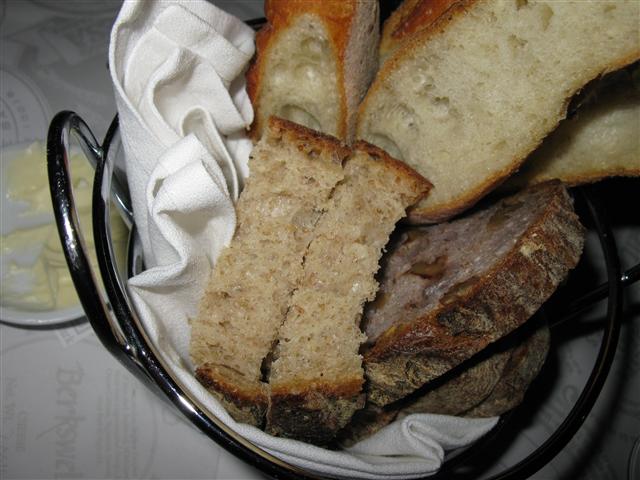 Mike ordered Steak au Poivre, which was perfectly cooked and very tender with a lovely coating of cracked peppercorns.  It came with fries, which were golden and crispy outside and tender inside, and watercress, which was lightly dressing with vinaigrette.  He was in heaven and his only complaint was that he wished the steak was a little bigger (I think it might have been a 4-6 oz portion.) 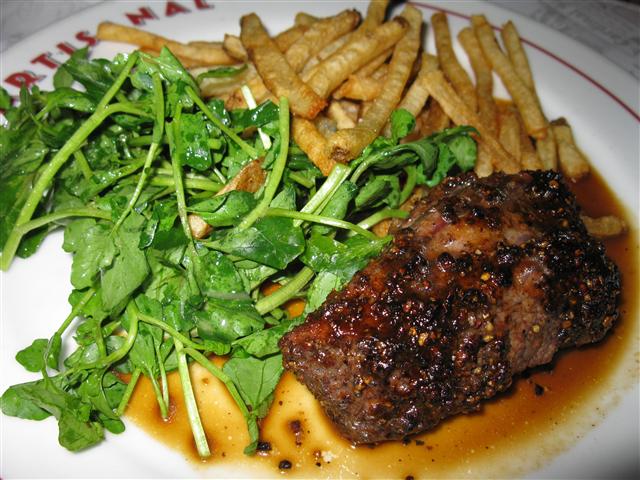 There is a different dinner special each day and the day we were there it was Dover Sole Meunière.  It was a little pricey, but I went with it anyway (it’s one of my favorites and Antonio said it’s one of the best things on their menu).  I was so glad I did because it was fantastic.  The sole was lightly breaded and fried and the texture was tender and flaky.  The flavor was rich from the butter but bright at the same time because of the lemon.  It might be hard to see from the picture, but there were actually little supremes of lemon in addition to the lemon juice, which I thought added a lot to the dish.  The sole came with a spinach/onion sauté and mashed fingerling potatoes.  Both side dishes were delicious but the fish was the absolute star of the meal. 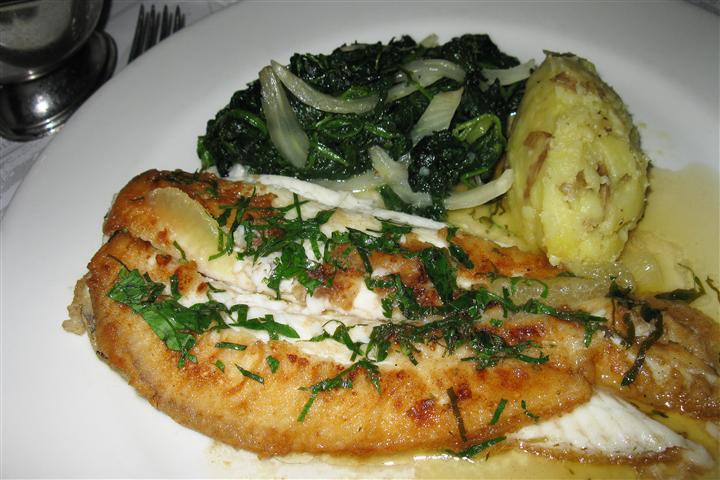 I normally go for chocolate for dessert but being in a fromagerie I absolutely had to order cheese.  I had heard that their cheese portions were somewhat on the small side but this could not have been farther from the truth.  There was a generous amount of each type of cheese – so generous in fact that we couldn’t finish them!  I ordered a flight of three cheeses:  Pierre Robert, Monte Enebro, and Époisses.  I ordered the three condiments that they have available to accompany cheese plates:  quince paste, honeyed walnuts, and fig paste. 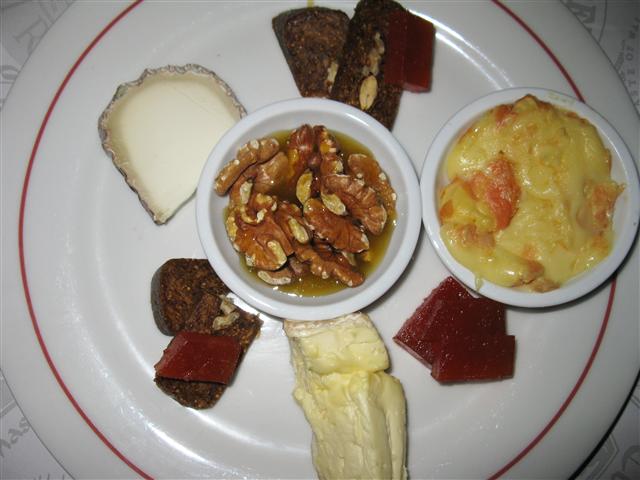 Pierre Robert is a triple cream cheese that’s similar to Brie.  It is rich, buttery, and fairly mild flavored (with a very light tang), and has a smooth, almost light and airy texture.  Actually, the best thing I can compare the texture of Pierre Robert to is mousse (cheese mousse, mmm…).  I thought the Pierre Robert was delicious paired with the honeyed walnuts.  Monte Enebro is a creamy Spanish goat cheese with a salty, lemony flavor, which made it an exceptional pair with the quince paste.  Époisses is known as “the king of all cheeses” and rightly so (it was actually my favorite of the three cheeses).  It’s super soft and creamy with a gooey, almost pudding-like consistency.  (If Pierre Robert is cheese mousse, then Époisses is definitely cheese pudding.)  Époisses has a salty flavor and pungent odor and I loved it paired with the fig cake. 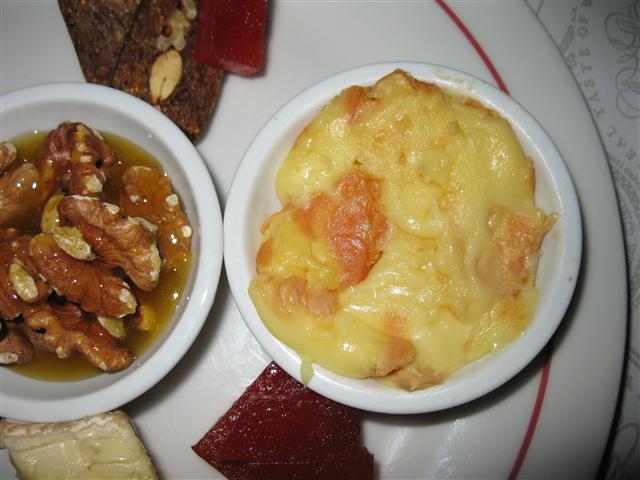 Époisses up Close:  “The King of All Cheeses”

For dessert Mike initially ordered the Warm Chocolate Tart, which came with Salted Caramel Ice Cream.  I couldn’t resist a little taste and I thought it was amazing.  The tart was dark chocolate and had a fudgy texture.  The ice cream was the perfect blend of salty and sweet and complimented the tart very well.  Unfortunately, the menu didn’t specify that the tart was dark chocolate and Mike (with his strange aversion to dark chocolate) didn’t like it at all.  He told the waiter, who took the dessert back (too bad I was too full from my cheese to eat it!) and made a suggestion for a different dessert for Mike. 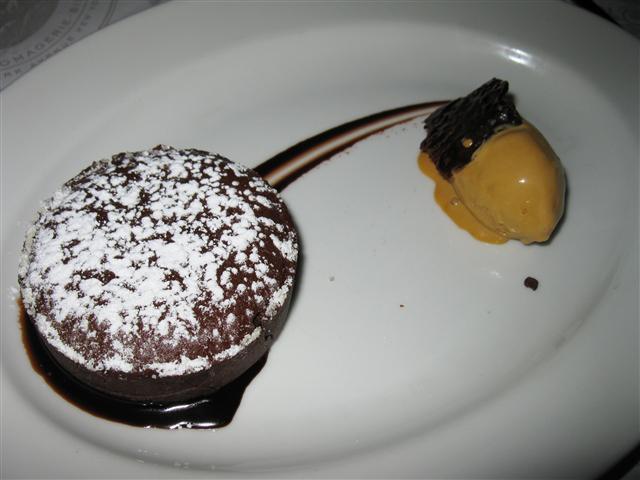 Antonio suggested the Artisanal Cheesecake with Pecan Praline and Caramel Sauce for Mike.  It ended up being the perfect suggestion because Mike loved it.  The cheesecake was lusciously creamy and the crust was crunchy and nutty with a nice salty/sweet flavor.  Of course the pecan praline and caramel sauce completely gilded the lily. 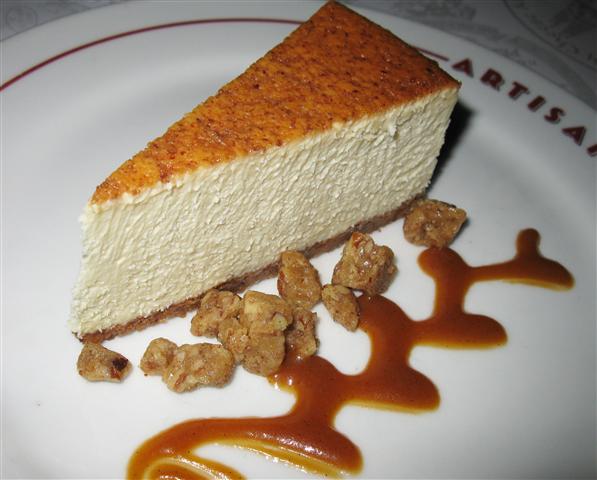 I ordered a latte to end the meal and then Antonio kindly informed us that the manager was sending over a complimentary assortment of petit fours. 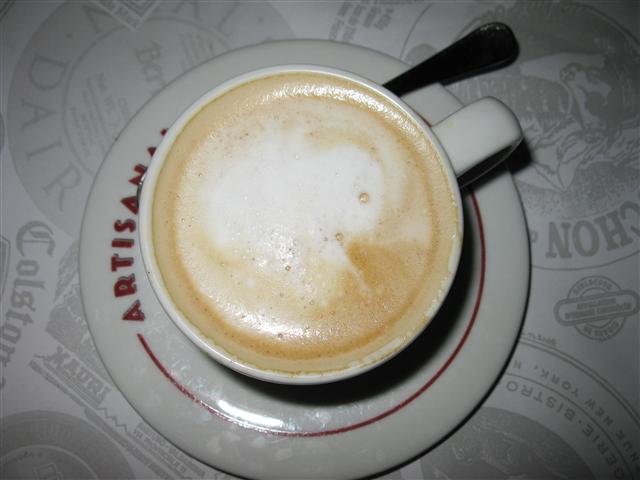 There were five different kinds of petit fours:  almond cookie covered in powdered sugar, lemon meringue, citrus jelly, cream filled choux pastry, and chocolate brownie.  At that point we were both so full that the only thing we could manage to eat were little nibbles of each, but we agreed that we both liked the cream filled choux and the chocolate brownie the best. 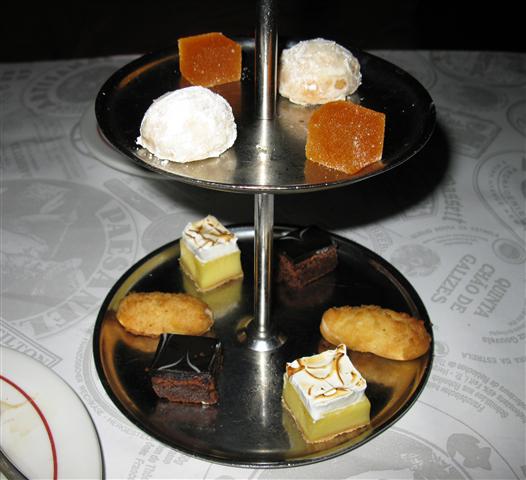 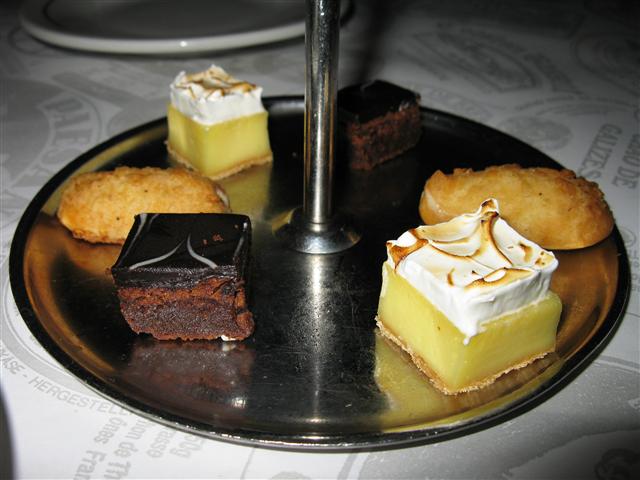 Look at that fudgy chocolate!

Mike and I left Artisanal stuffed and happy.  The food was excellent, the menu had a wide selection, and the cheese was outstanding.  Not to mention that I’ve heard they have one of the best macaroni and cheese gratins in New York City, which I’m hoping to come back for!