According to beefstroganoff.net, the origin of Beef Stroganoff dates backs to the 19th century, although it was not a new recipe at that time, rather a refined version of an even older Russian recipe.  It is thought to have been in Count Pavel Stroganoff’s family for years and have been made famous through his love of entertaining.  Count Pavel Stroganoff was a celebrity, a dignitary at the court of Alexander III, a member of the Imperial Academy of Arts, and a known gourmet.  Despite this, it is doubtful that Beef Stroganoff was Count Pavel Stroganoff’s or his chef’s invention since the recipe was included in the 1871 edition of the Molokhovets cookbook, which pre-dates his fame as a gourmet.  In 1891, Beef Stroganoff won first prize in a cooking competition where it was presented by Charles Briére, an employee of the Stroganoff family.  Like today’s version, this original recipe had beef, mushrooms, and sour cream.  Legend has it that Count Pavel Alexandrovich Stroganoff had lost all his teeth and his chef had especially prepared this recipe to overcome the Count’s handicap. 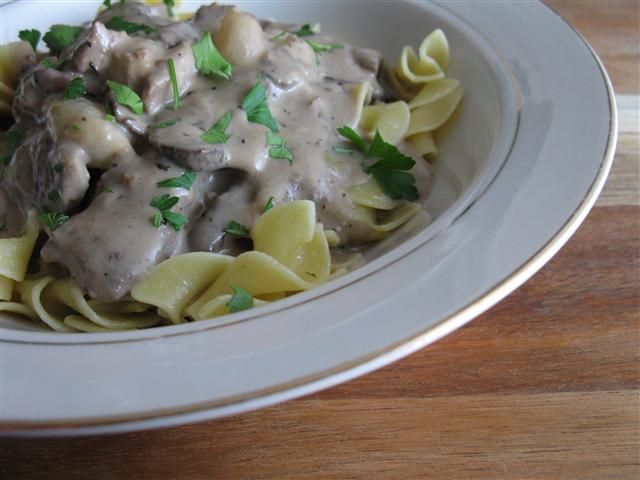 In a 5-quart pot, heat the olive oil on high until it starts to ripple; add the beef and sauté until browned on all sides (about 5 minutes).  Add the chopped onion, garlic, and mushroom, and sauté until the onion starts to soften (about 5-7 minutes).  Add the flour and stir to coat everything; sauté about 2 minutes, stirring continuously.  Add the water, Worcestershire sauce, bouillon cubes, bay leaves, thyme, 3/4 tsp salt, and 1/2 tsp black pepper.  Bring it up to a boil and then turn it down to a simmer.  Cook (uncovered) about 45 minutes, or until the beef is tender and the liquid is thickened and reduced.  In the last 5 minutes of cooking, add the pearl onions.  Turn off the heat and stir in the cheese.  Taste and add more salt and pepper as necessary.

If desired, serve over egg noodles, garnished with parsley.