On vacation we ate at several restaurants that were new to us, so I thought this would be the perfect time to post my first restaurant review.  I’ve always loved reading reviews that other bloggers post – especially the reviews posted by the lovely bloggers, Lorraine, Heavenly Housewife, and Natasha – so for a while I’ve been excited to post my first review! 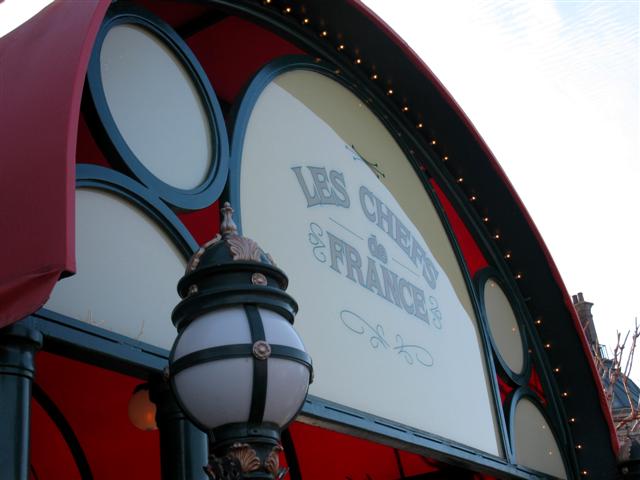 There is no shortage of fabulous restaurants in Orlando.  A few of my old standbys are Emeril’s (where I actually didn’t eat this year) and Wolfgang Puck’s (where I did eat, but wish I hadn’t; unfortunately the food and service were seriously not what they used to be).  To name a few of the issues at Wolfgang Puck’s, I ordered macadamia crusted chicken but the waitress brought me a steak, insisting that I had ordered it, only to realize afterwards that it was for another table.  Also, I ordered a molten chocolate lava cake for dessert that came out slightly frozen in the center…needless to say, there was no lava.  :) 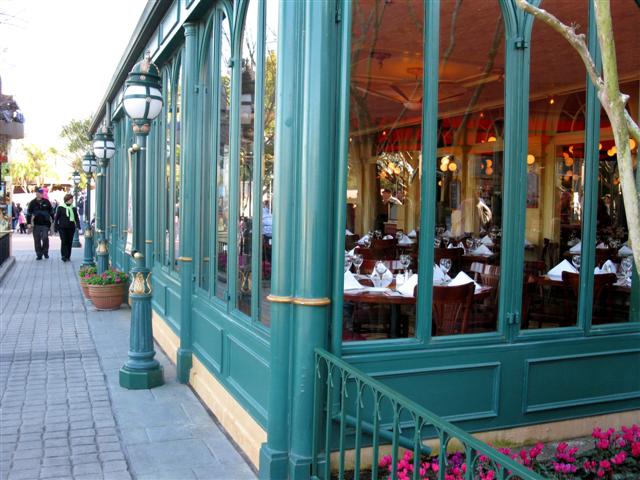 One of my favorite restaurants that we ate at happened to be right at Disney.  Disney’s Epcot is full of restaurants featuring cuisines from around the world; we ate at several of them so I decided to feature one of my favorites…Chefs de France!  The food was divine and the service impeccable. 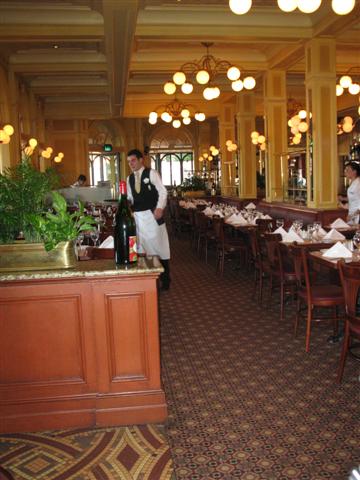 We had a reservation for 5 o’clock, which was good since we only had to wait about 5 minutes to be seated.  When we got there the restaurant was basically empty, but within a half hour it was completely full (literally not a table open).  The look and feel of the restaurant was comfortable; it was decorated in gold and yellow hues and we all admired the lovely crown molding.  The only qualm I had about it was that there were 5 people (4 adults and 1 child) in our party and our table was a little crowded…really a very minor thing, which the wonderful food and service more than made up for. 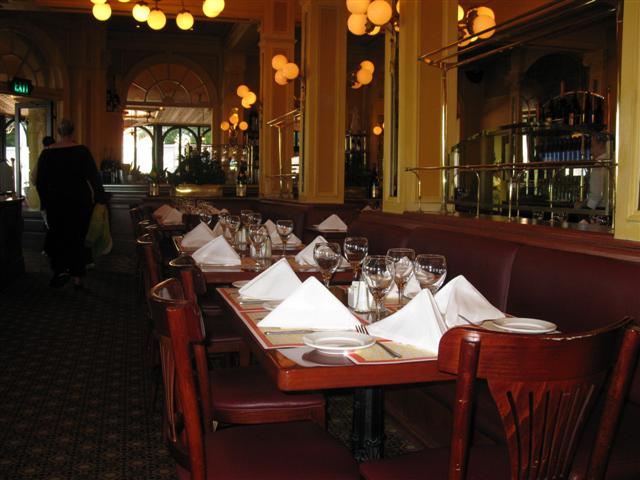 We were pleased with the menu and we all decided to order the Prix Fixe menu (you can’t beat $37 for 3 courses!).  We decided to also order a cheese platter (which was only $9.95), since cheese platters are my favorite part of every French meal. 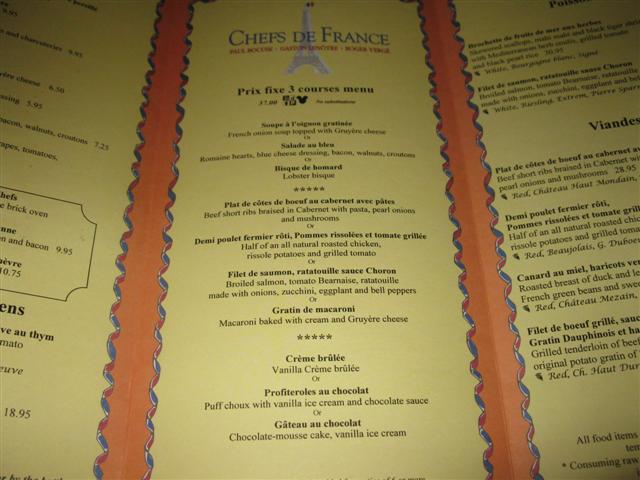 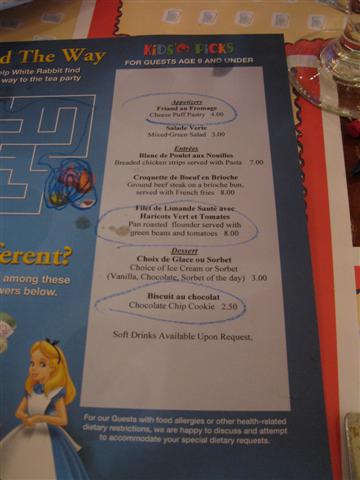 The waitress brought our drinks and complementary baguette right away.  The baguette was divine – warm, crusty on the outside, and yeasty and slightly chewy on the inside.  It didn’t need butter or cheese but of course that didn’t stop us from slathering it on anyway. 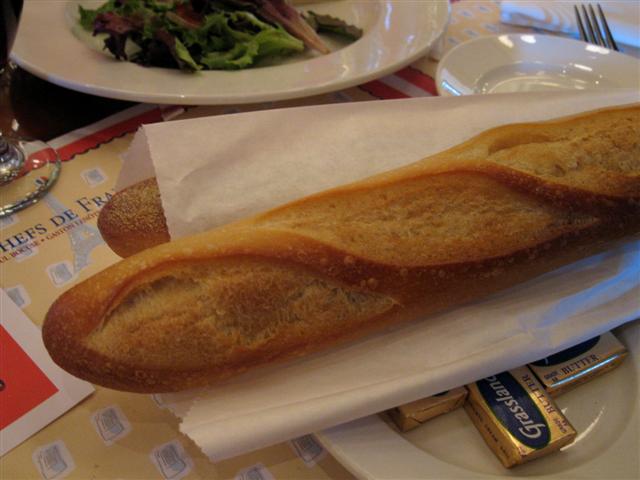 Cheese platter, clockwise from the top:  Brie, Comté (also called Gruyère de Comté), Chaumes, salad greens perfectly dressed with balsamic vinaigrette, and Chèvre (goat cheese) in the center.  The Brie was buttery, rich, and slightly fruity.  The comté was nutty, smooth, and slightly salty…it was my personal favorite.  The Chaumes was creamy and rich with a mild flavor.  The Chèvre (Mike’s favorite) was tart and slightly salty.  The only change I would have made is to leave the cheese out at room temperature a bit longer before eating it, since it was still a little chilled. 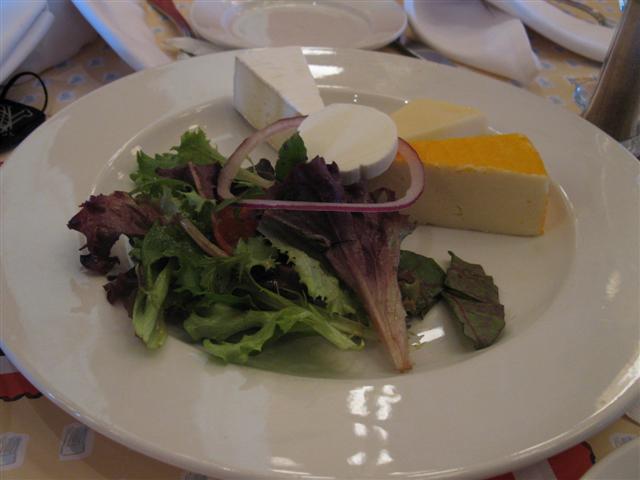 Our sweet and lovely waitress Marilyne brought us complementary wine, a red Saint-Émilion from Bordeaux.  Sadly Mike and I don’t drink, but it didn’t go to waste though…the other adults in our party were happy to enjoy it. 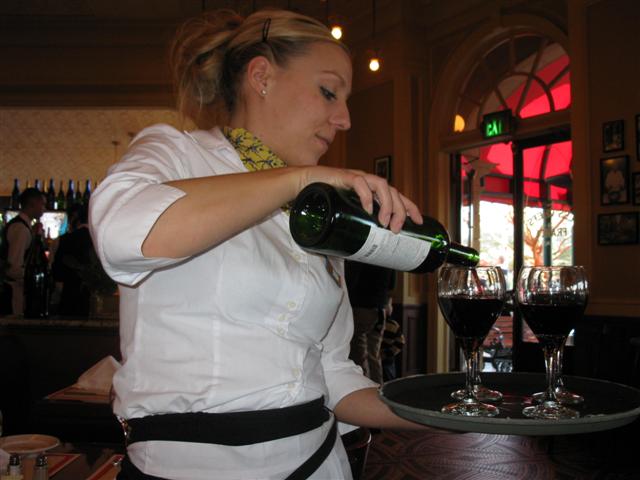 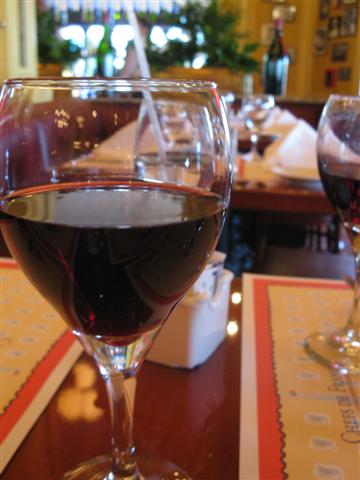 Mike ordered French onion soup for his first course.  At first glance the broth looked lighter than what I was used to, and I thought the flavor might not be as deep and rich as I like it.  Despite the lighter-colored broth it was full of rich flavor.  I was happy that the flavor of thyme was distinctive, since I think this really makes French onion soup.  The soup had several croutons and was topped with melted Gruyère. 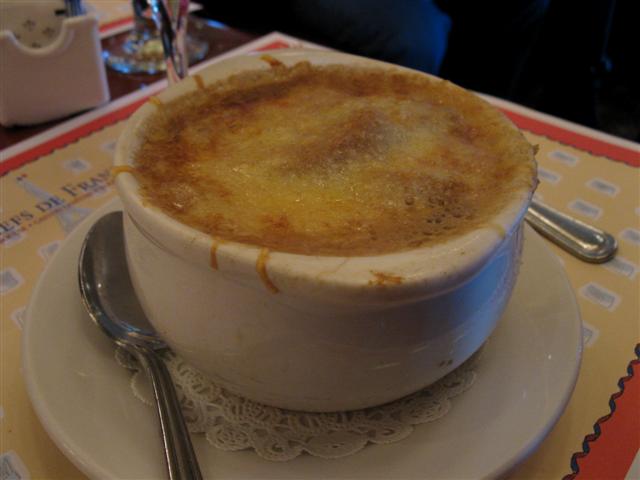 I had lobster bisque for my first course.  There were large chunks of lobster in a creamy tomato broth…absolutely delicious. 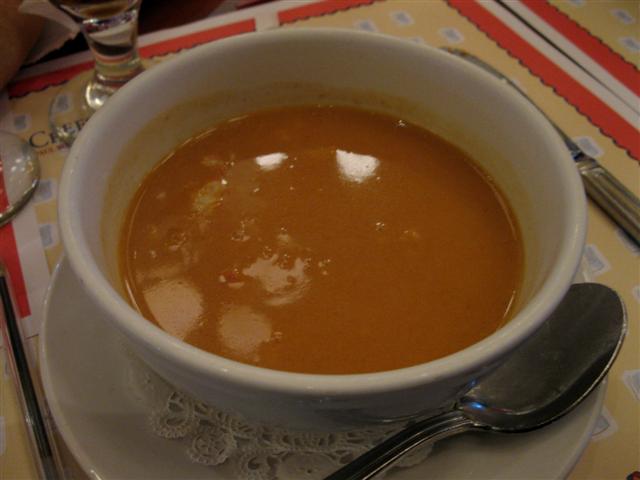 My niece, Rosie, ordered cheese puff pastry for her first course.  The cheese was mild flavored and delicious…it was more of a cheesy custard filling.  It came with a side salad dressed with balsamic vinaigrette. 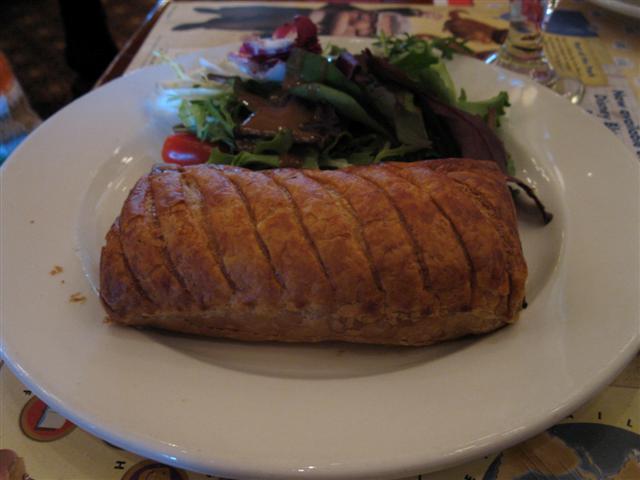 For his main course, Mike ordered the roasted chicken and substituted French fries instead of the rissole potatoes.  The chicken was incredibly tender and juicy and the light sauce that topped it was perfectly seasoned.  The fries were crispy outside and soft inside, just the way I like them.  I didn’t taste the roasted tomatoes. 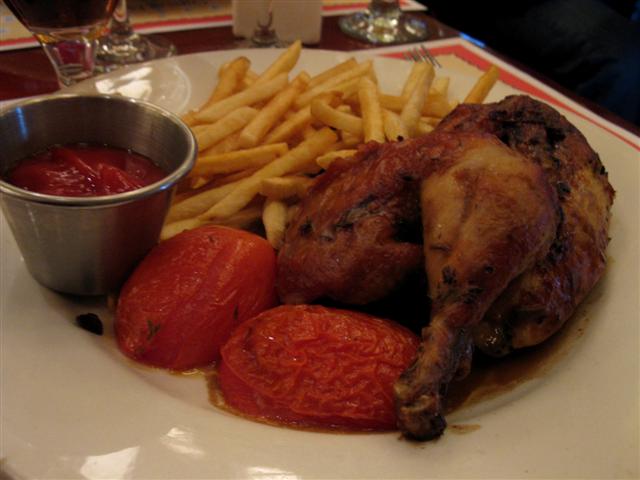 I had the beef short ribs braised in Cabernet with pasta.  The beef was fork tender and full of flavor, and the mushrooms and pearl onions went really well with the dish.  The pasta was buttered (I think), but it was a little dry and plain on its own…that was remedied by tossing it with the flavorful juices from the short ribs. 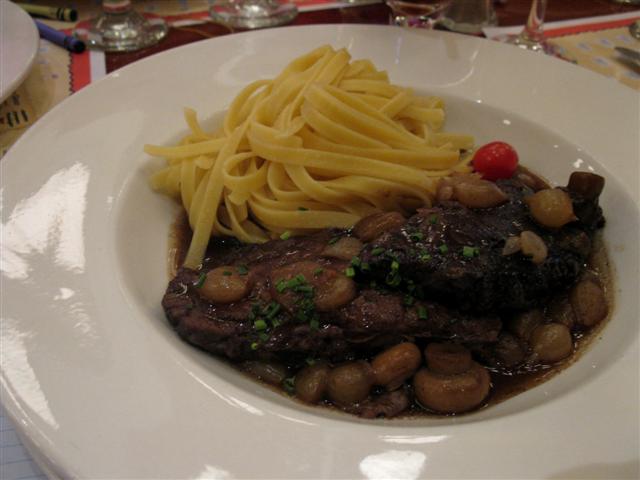 Rosie ordered the pan roasted flounder with green beans.  (For a 6-year-old she orders well, right?!)  The fish had a really lovely golden caramelization but was slightly overcooked and a tad dry.  The green beans were cooked just beyond crisp tender, but still tasted fresh and delicious. 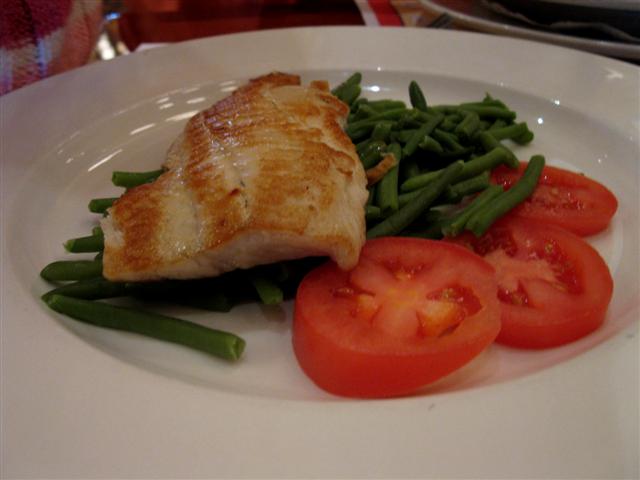 For dessert Mike ordered the chocolate mousse cake, which was intensely chocolaty and rich.  (I’m a serious chocolate lover and I actually had my fill after 2 bites…but that might just be because I had my own chocolate-drenched profiteroles to attend to.  ;) ) 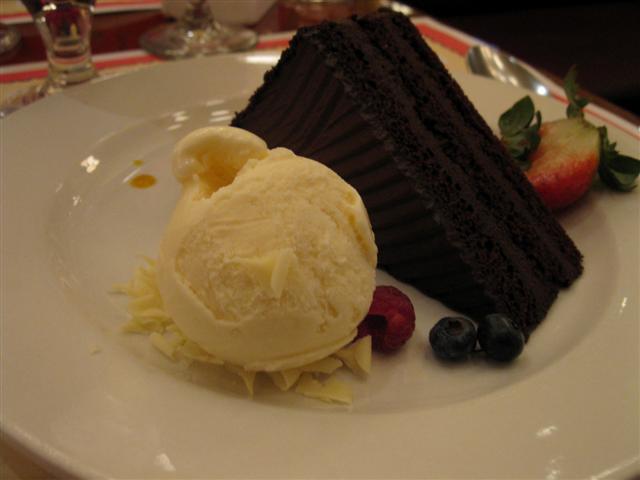 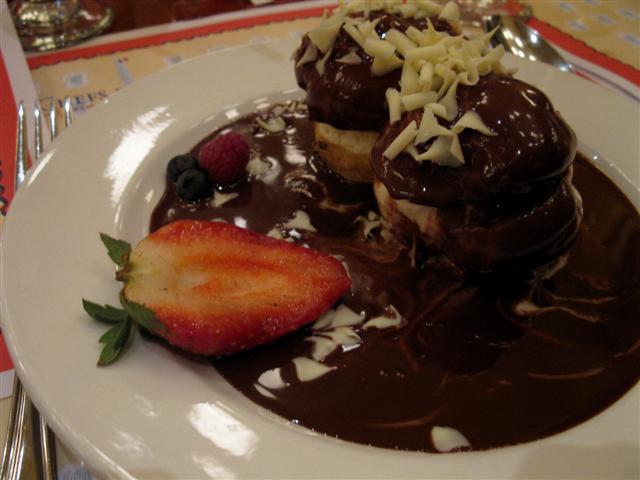 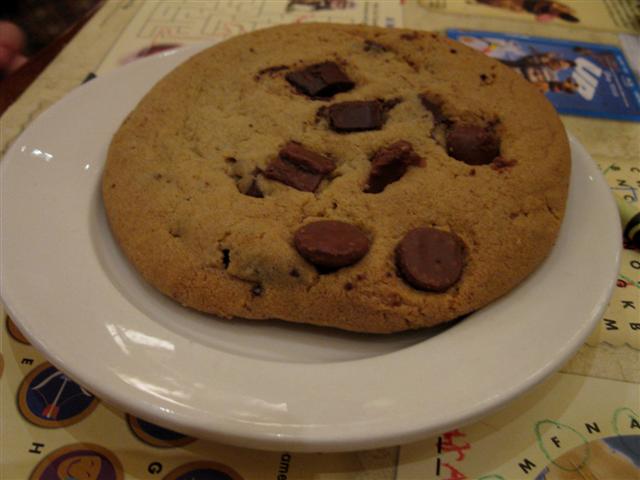 We all enjoyed this fabulous dinner and definitely plan to return when we visit Disney’s Epcot again.

Now onto the giveaway!  I thought it would be fun to giveaway a large sampler pack of coffee that I got at Disney.  The pack includes 10 (1.75 oz) cans of the following flavors of coffee:  Disney Blend, Decaf Disney Blend, Hazelnut, French Vanilla, Irish Crème, Belgian Chocolate, Hawaiian Macadamia, Coconut Crème, Caramel Toffee, and Cinnamon Pecan. 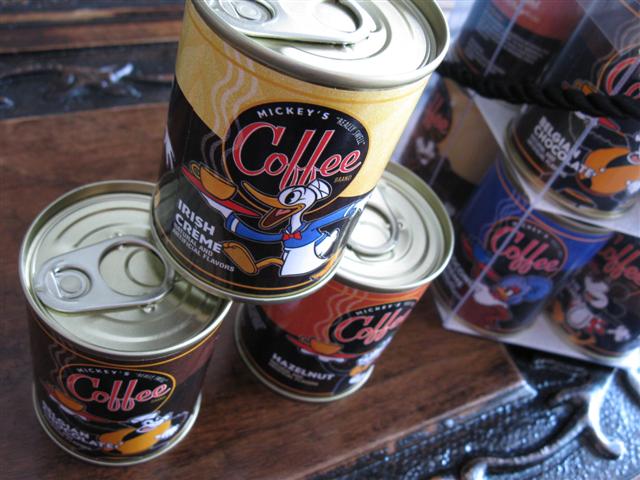 To enter this giveaway, do one of the following or do all four for more entries:

1. Leave a comment on this post telling me one of your favorite types of coffee.  (You can leave one comment each day as long as your answers are different.)

3. Add me to your blogroll and leave a comment on this post letting me know you did so.