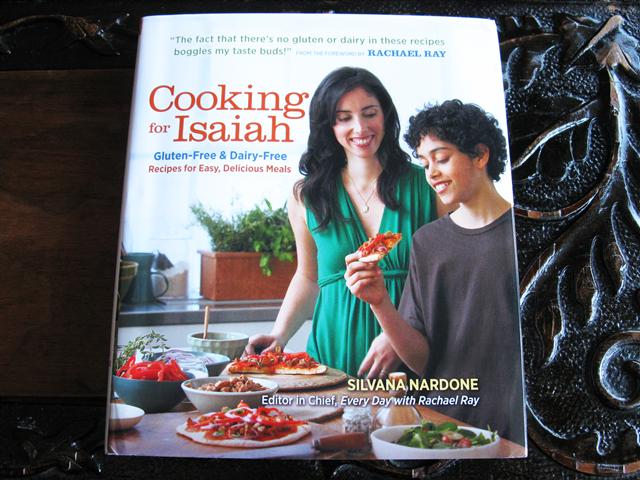 I recently received a copy of Silvana Nardone’s (Editor-in-Chief, Everyday with Rachael Ray) cookbook called Cooking for Isaiah.  Silvana developed the gluten- and dairy-free recipes contained in this book when her son Isaiah was diagnosed with food sensitivities to these items.  (It really is a very moving story…and I love Silvana’s dedication, which reads in part “…together, love and food are nature’s greatest healer.”  I think this is so true of so many ailments!) 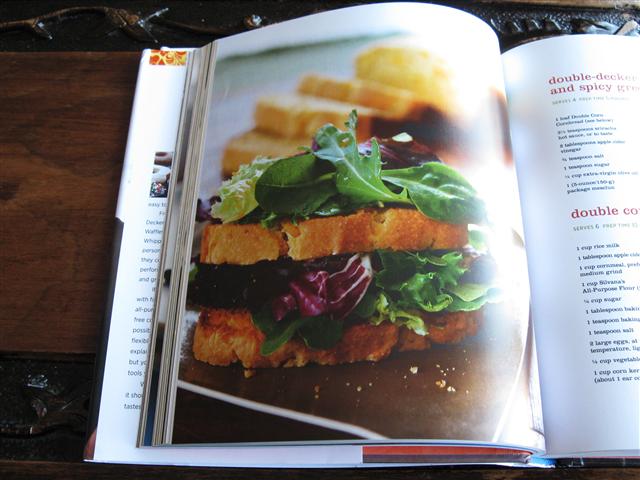 Since so many people are finding that they have sensitivities to gluten and dairy, I was thrilled to receive this book and share my thoughts on it with you.  The book starts off with Silvana’s all-purpose gluten-free flour blend, which is a mix of white rice flour and a few other ingredients.  This gluten-free flour blend is the basis for many of the recipes in the book, but if you don’t have gluten intolerances, Silvana says that you can substitute regular all-purpose flour.  I know for many people, gorgeous pictures in a cookbook (or the lack thereof) are deal-breakers.  I’m happy to report that this book is full of lovely food pictures…there isn’t one of every recipe, but there are quite a few. 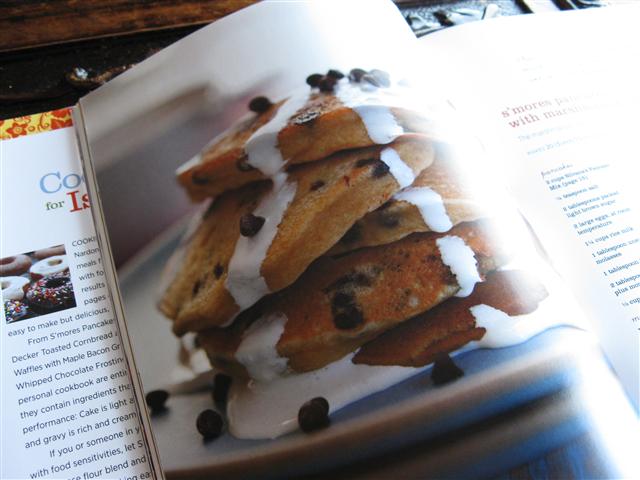 The recipes themselves sound pretty delicious and I was impressed that she was able to remake so many yummy dishes into gluten- and dairy-free versions.  Silvana is a whiz at decadent, dessert-like breakfast treats, with recipes for things like Banana Pancakes with Warm Cinnamon Goo, Chocolate Chip-Banana Split Belgian Waffles with Wet Walnuts and Hot Fudge Sauce, and Honey-Nut-and-Banana Crepes. 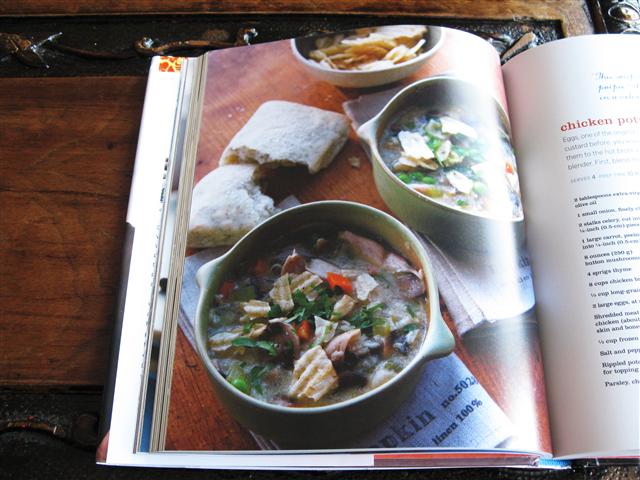 I don’t know if our recent damp, chilly weather has anything to do with it, but I was really impressed by the soup recipes in this book.  The first soup recipe really caught my eye; it’s Chicken Potpie Soup, which looks so hearty, warming, and delicious.  It’s topped with potato chips, which I thought was a brilliant idea (it reminds me of casseroles that my mom used to make when I was young that she topped with crushed potato chips…any other children out there from the late ‘80s/early ’90s that remember their moms making something like this?  So good!). 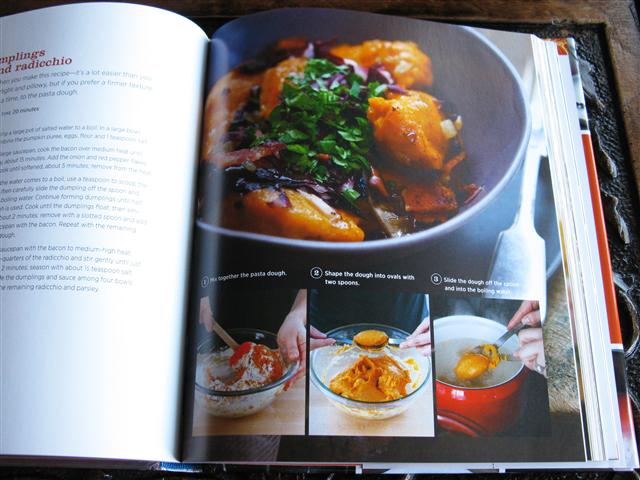 Pumpkin Dumplings with Bacon and Radicchio

I’m dying to try the recipe for Pumpkin Dumplings with Bacon and Radicchio…they look like soft little pumpkin pillows that I can only imagine taste divine!  Something that I think is very unique about this book is Silvana’s recipe for Bread Slabs.  She makes both sweet and savory varieties and uses them to make the most amazing sounding sandwiches, like Chocolate-Hazelnut Butter on Toasted Chocolate Chip Bread Slabs and French Dip with Caramelized Onions and Russian Horseradish Mayo on Bialy Bread Slabs. 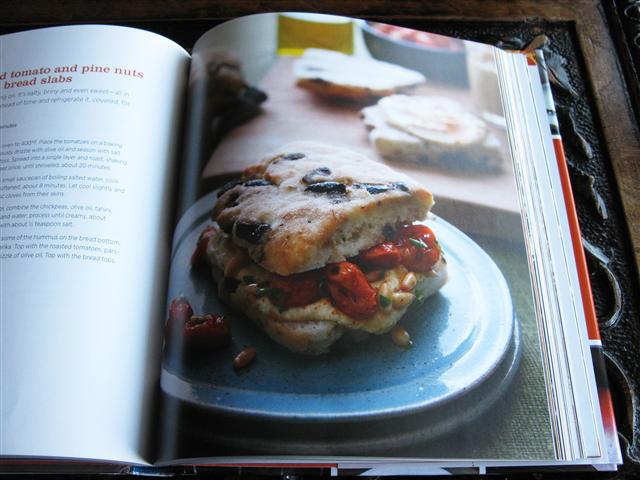 The first recipe from the book I decided to make was Potato-Crusted Bacon Bits and Egg Pie.  I was having a friend over for brunch so I had to scale down the recipe to feed 2 people (the recipe in the book feeds 4-6).  Also right off the bat, since I don’t eat pork I used turkey bacon instead of the regular bacon in the recipe.  I added scallions for color, and mostly because I like to incorporate onion flavor wherever I can in my cooking. 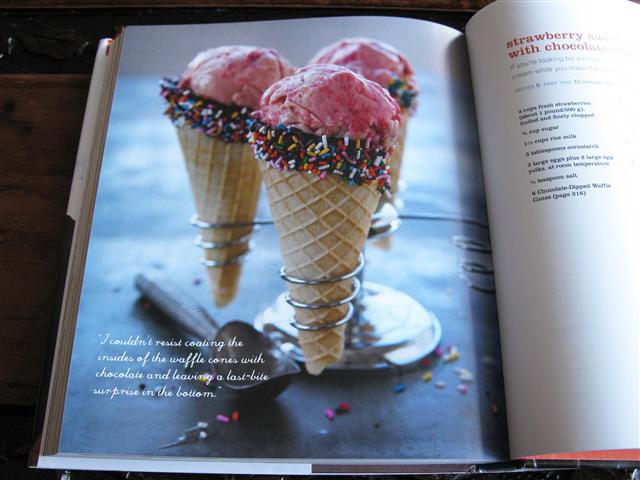 This dish was a hugely delicious success!  In the end it looked more like a baked omelet than an egg pie with the changes I made to the original recipe; the potato sort-of incorporated itself into the egg instead of remaining a separate crust on the bottom but that didn’t matter, it still slid right out of the pan.  If you want a separate potato crust layer, you could probably double the amount of potato and keep everything else the same. 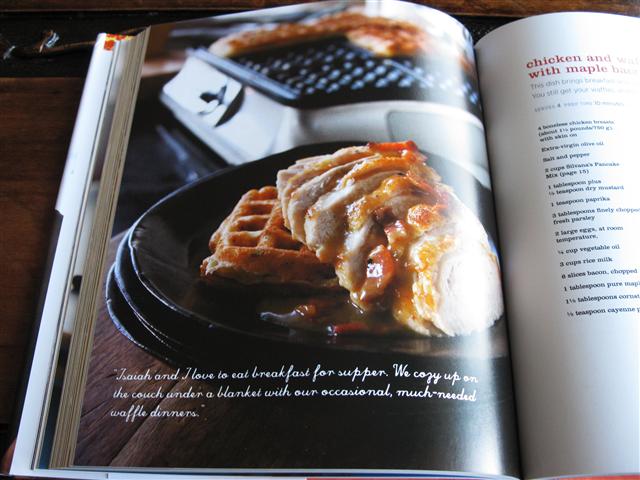 To complete the brunch, I served this omelet with a salad of baby greens and fresh herbs dressed with lemon vinaigrette along with some good crusty bread.  And to make the presentation even more special, I flipped the omelet over onto a plate and decorated it with veggies arranged to look like flowers (I was going for roses but I almost think they look more like tulips?).  For the leaves I used flat-leaf parsley, the stems are made out of scallions, and the flowers themselves are the peels from grape tomatoes.  The flowers were so much fun to make and so pretty!  I think they added a lovely touch to the omelet. 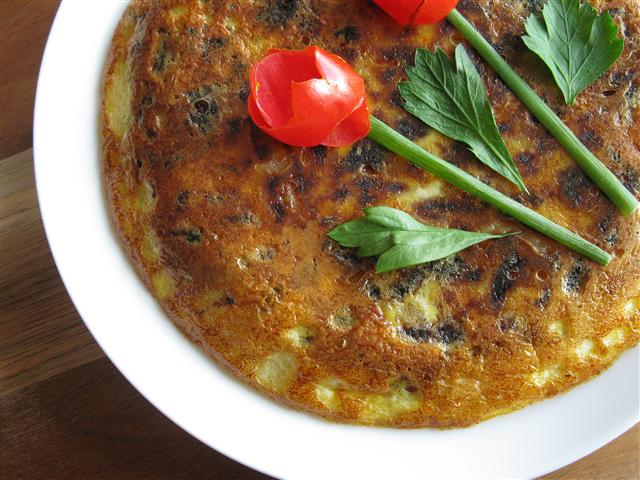 My version of Silvana Nardone’s recipe for Potato-Crusted Bacon Bits and Egg Pie…I call it Baked Omelet with Potato, Scallion, and Turkey Bacon (with veggie flowers on top)  :)

Baked Omelet with Potato, Scallion, and Turkey Bacon {Inspired by and adapted from Silvana Nardone’s recipe for Potato-Crusted Bacon Bits and Egg Pie in Cooking for Isaiah (Sprig, 2010)}

(Yield:  2 servings, if served with a green salad and some crusty – perhaps gluten-free – bread)

Preheat the oven to 350F.  Peel and grate the potato, then transfer it to a colander and add 1/4 tsp salt.  Let the potato sit with the salt for 10 minutes, then place the potato in a clean kitchen towel and wring out the liquid.

Heat the oil in a 6-inch ovenproof frying pan over medium-high heat; when the oil is hot add the turkey bacon and sauté until crispy (about 5 minutes).  Use a slotted spoon to remove the turkey bacon.

Add the potato to the pan you cooked the turkey bacon in, spreading the potatoes in an even layer on the bottom.  Cook over medium to medium-low heat without stirring until the potatoes are browned and crispy on the bottom (about 5 minutes).

In a medium bowl, whisk together the eggs and milk, then whisk in the scallion, bacon, and a pinch of salt and pepper.  Pour the egg mixture over the potatoes and bake until the eggs are set (about 15-20 minutes).  Let the omelet rest for a couple minutes before removing from the pan and serving.

Serve with a green salad and some crusty bread if desired. 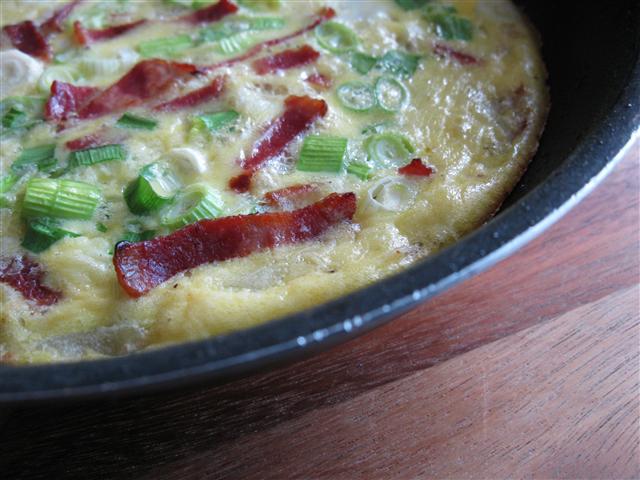 Pretty Enough Before the Flip, But it Gets Even Better… 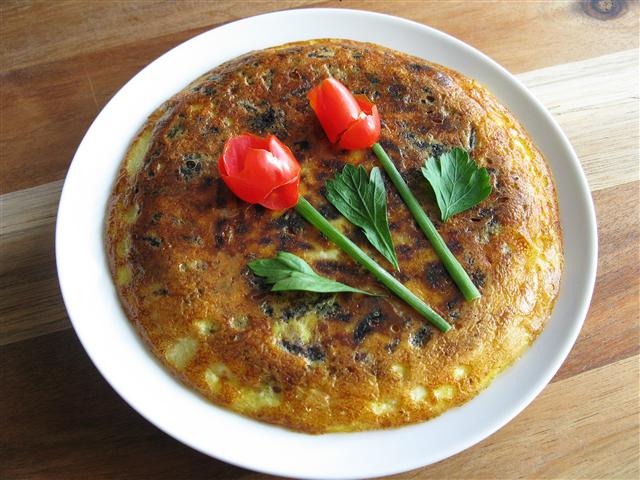 Keeping Venice in my prayers. This would have been