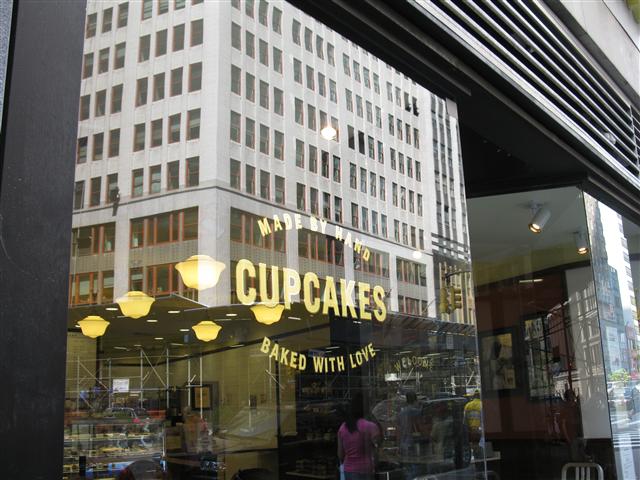 Before Mike and I headed to NYC I did a little research on the infamous cupcake culture of New York.  Magnolia is the obvious choice when you’re in the midst of New York with a cupcake craving, but I’ve heard mixed reviews.  The biggest offenses I’ve heard about Magnolia’s cupcakes are that they overpriced (which is to be expected…what isn’t overpriced in New York City?) and dry.  I can live with an occasional overpriced cupcake…but a dry cupcake?  Definitely not worth the calories.  If I’m going to indulge in a calorie fest it better be worth every bite (am I right, ladies?).  And trust me, if I’m going to be walking as much as we walked in NYC I will be indulging in an occasional cupcake.  ;)  I found quite a few rave reviews for Crumbs so Mike and I decided to give it a try.

Crumbs is a chain bakery with several locations in New York City as well as other places across the country.  The Crumbs motto is “Made by Hand.  Baked with Love.”  Sounds pretty good, right?  Well it gets even better.  Many of the cupcakes are filled with different fillings, including ganache, flavored frostings, and jams. 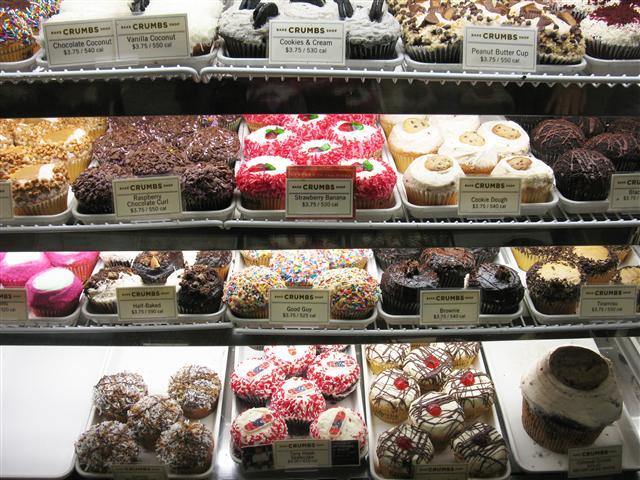 In the picture below, I was trying to take a picture of the cupcake with the pretty flower on top.  Later when I looked at this picture I noticed the clerk in the background…I wonder what he was saying? 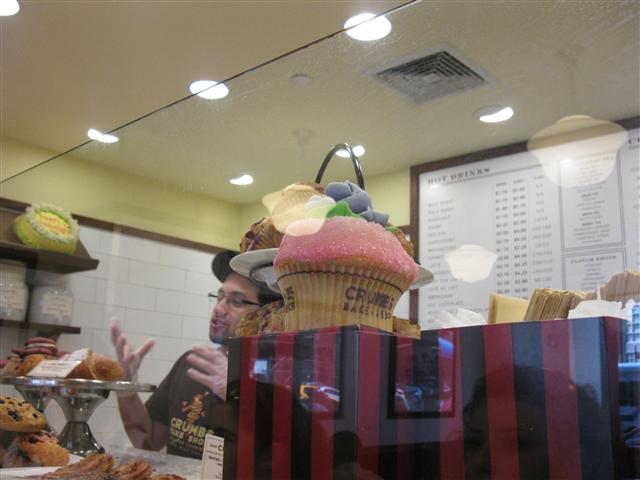 There are several Crumbs locations in NYC with seating areas; the location we went to was actually pretty spacious with quite a few tables (especially by NYC standards). 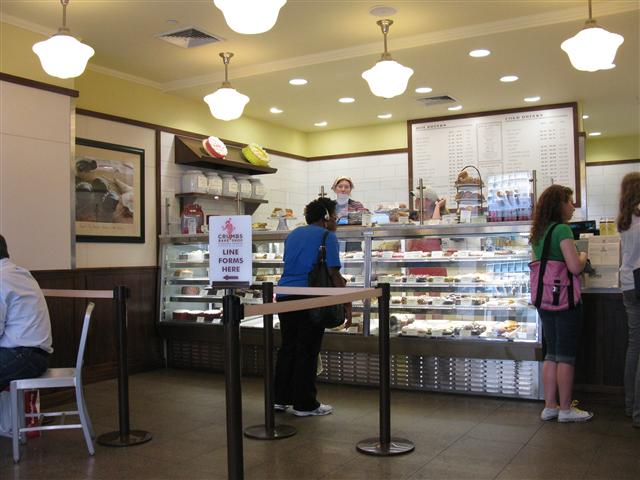 Mike had a chocolate croissant.  He said it was delicious – tender and flaky with the perfect amount of chocolate. 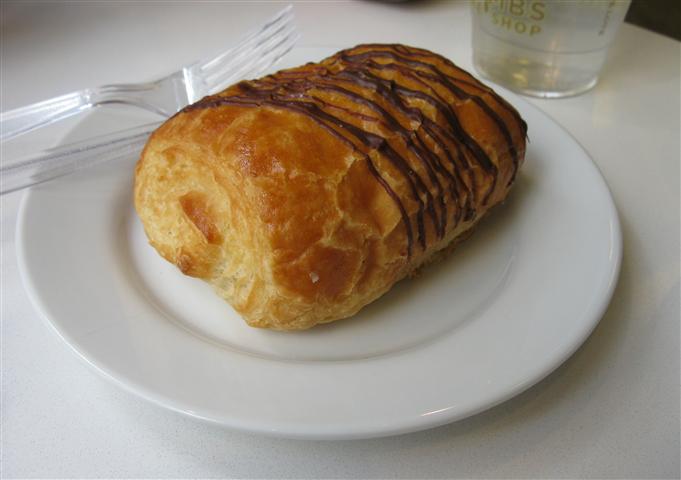 I had a Cookies and Cream Cupcake.  It had chocolate cake and vanilla cream cheese frosting mixed with crushed sandwich cookies, and was topped with a sandwich cookie.  It was amazing.  The cake was dark chocolaty, moist, and not overly sweet (just the way I like it!).  The frosting was really sweet, but there wasn’t a ton of frosting, so that worked out well.  The only thing I didn’t like was that the frosting was somewhat hardened and dry, but depending on the type of frosting that can happen even if it was made the same day. 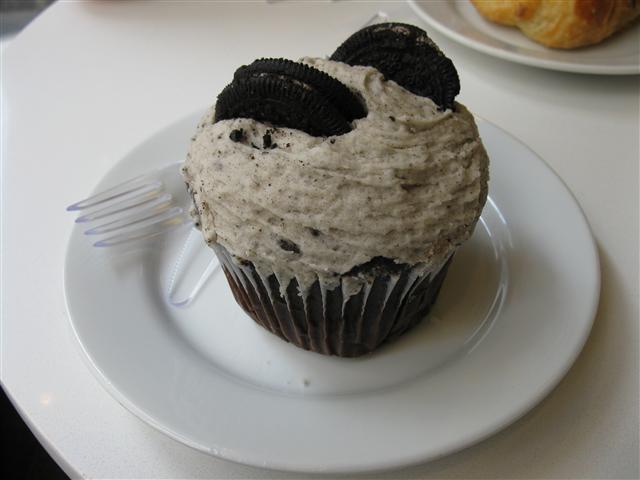 I’m usually a chocolate girl, but my #1 favorite was the Raspberry Swirl Cupcake, which has vanilla cake filled with raspberry preserves and frosted with vanilla cream cheese frosting and a swirl of raspberry preserves.  The cake was super moist even though it wasn’t eaten the same day it was bought.  There was a really generous amount of the raspberry filling, and the taste of the preserves reminded me exactly of the filling in a raspberry jelly donut.  It was incredible. 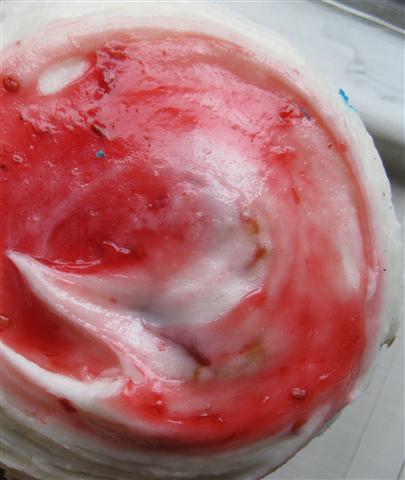 The Red Velvet Cupcake was my #2 favorite.  It was classic red velvet cake topped with cream cheese frosting, then sprinkled with red velvet crumbs and edged with white sprinkles.  The beautiful red cake was rich with a moist, tender crumb and had the perfect hint of chocolate.  I have to say I think it actually might be the best red velvet cake I’ve ever had. 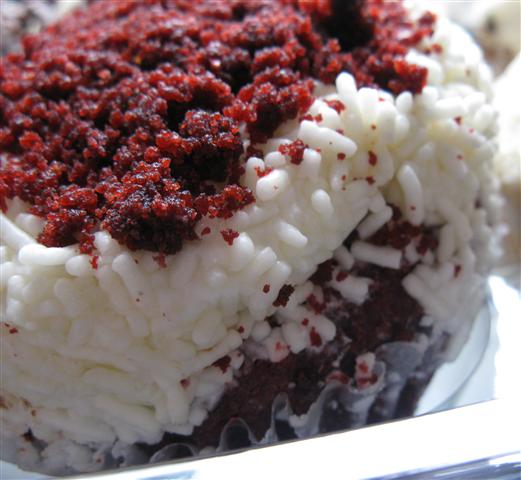 Next time a cupcake craving hits, I will probably be hitting up Crumbs again (and I probably won’t wait until our next trip to NYC…they have online ordering!).