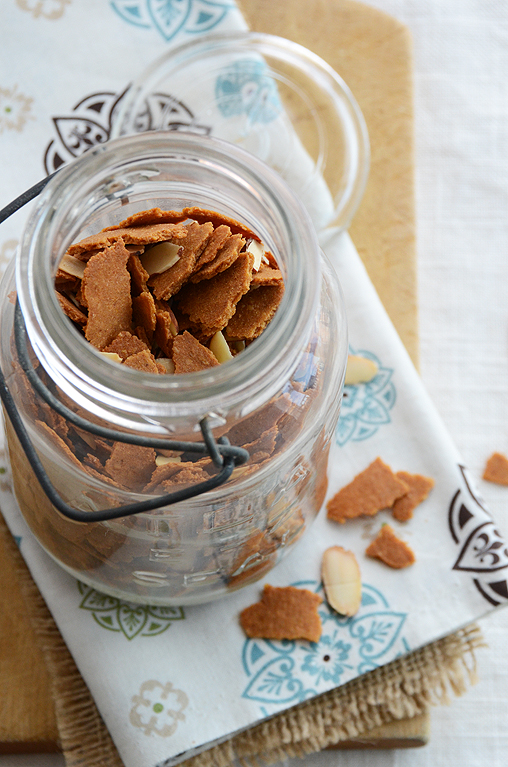 I make granola frequently and I’ve shared a couple recipes for it (this Pumpkin Spice version is one of my favs when autumn is in the air and even when it’s not), but I’ve never tried my hand at homemade cereal before.  (You know, the flake kind.)  Until now.

I found a recipe on Mr Breakfast for Nutty Bran Flakes and I was immediately inspired.  (Obsessed is probably a better word, lol.)  I knew I had to make my own version.

It came at the perfect time (I had just discovered Mr Breakfast’s recipe!) that I was contacted by Bob’s Red Mill and Attune Foods, asking if I wanted to develop a brunch dish for their Whole Grain Brunch.  Without having to think twice I knew that I wanted to participate and what I wanted to make.  :) 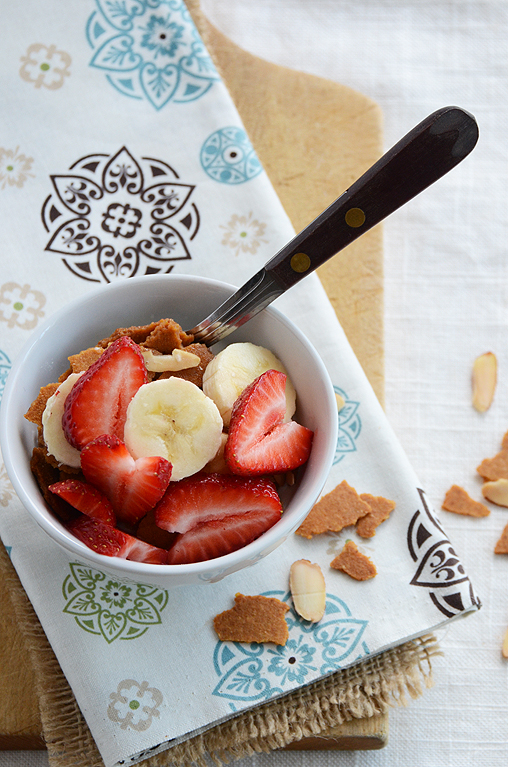 With this cereal, since you’re rolling the cereal dough out by hand instead of using special machinery, the flakes won’t be as thin as they are with store-bought flake cereal, but I like their rustic texture anyway.  (Plus it means that you can pour a bowl of cereal and milk and not worry about it getting soggy quickly…I am not a fan of soggy cereal.)  The great thing about making your own cereal is you know exactly what’s going in it, and you can customize it to suit your own tastes.  My version is absolutely full of healthy things, is naturally sweetened, and is a decent source of both fiber and protein.  And it tastes like almonds and vanilla…mmm.

(Scroll down to the bottom for the giveaway!) 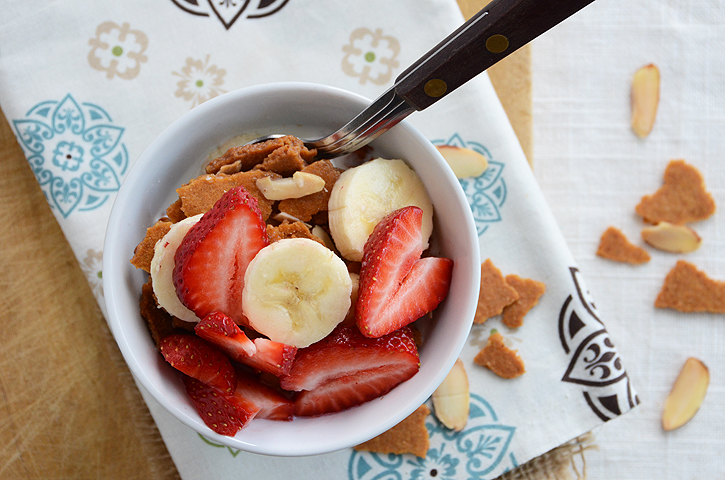 Hearty Almond-Vanilla Cereal (You can check out my recipe featured on Bob’s Red Mill here and on Attune Foods here.)

Canola oil, to oil your hands

Add the brown rice cereal and cornflakes cereal to a food processor and process until it forms a meal; pulse in the almond meal, oat bran, flaxseed meal, salt, and stevia.  With the motor running, pulse in the vanilla extract, almond extract, honey, and finally the almond milk.

Divide the dough in half and place each half on its own sheet pan; lightly oil your hands and spread the dough out as much as you can on each pan.  Cover the dough with a piece of parchment paper and use a small roller (or a small glass) to gently roll the dough out over the parchment, getting it as thin and even as possible.  Bake both pans of dough they feel dry and are starting to turn golden at the edges, about 15 minutes, rotating the pans once, and checking often for doneness after 10 minutes.

Remove from oven, turn oven temperature down to 275, and cool completely; break the cereal up into about 1/2-inch flakes.  Spread the cereal and sliced almonds in an even layer on 1 baking sheet and bake until the flakes are golden and dry, about 45 minutes (actual cooking time will depend on how thick your flakes are), gently stirring the flakes every 10 minutes.  (I wanted mine extra dry, so after 45 minutes I turned off the oven, left the oven door ajar, and let the cereal cool as the oven cooled down.)

Once cooled completely, store the cereal in an airtight container at room temperature for up to 2 weeks.

Bob’s Red Mill and Attune Foods are generously giving away a fantastic prize pack of every product of theirs that I used in this recipe to one lucky winner! 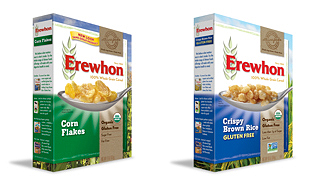 The Attune Foods Prize Pack Includes Everything You See Here:  Corn Flakes and Crispy Brown Rice Cereals (both are gluten-free)

You do not need to have a blog to enter.  To participate in this giveaway, you can do any of the following (if you want to enter more than once to increase your chance of winning, please leave a separate comment for each so I can count them as separate entries):

This giveaway ends Wednesday, June 6th at 9PM EST; after that the winner will be randomly selected and notified by email.  Good luck to all!

Disclaimer:  I received the Bob’s Red Mill and Attune Foods products used in this recipe for free, and they are also providing the prize pack for this giveaway.  As always, opinions stated are my own.