They make the best ever Aloo Tikki at a local Indian restaurant…at least that’s what I thought before making a homemade version.  One lazy Sunday morning I found myself with two leftover baked potatoes, thinking I would make Mike and I potato hash to eat alongside eggs (sunny side-up for him and poached for me), broiled tomatoes, and black tea, when a sudden urge for Indian food hit me.  I knew I wanted to incorporate Indian flavors into brunch (luckily Mike is always amenable to Indian food so he was only too happy to indulge me); specifically, I knew I wanted to make Aloo Tikki.

Surprisingly, these ended up being even better than the Aloo Tikki at our favorite restaurant…they were much less greasy since they aren’t deep fried, and I left a few larger chunks of potato which gave them great texture.  Leftover baked potatoes have never tasted so good.

A Quick Tip on Frying the Croquettes:  Aloo Tikki is usually deep-fried, but I use much less oil when making mine at home.  That being said, I did have one croquette fall apart while cooking.  It actually ended up being the most delicious one though.  After it fell apart, I spread it out in the pan and there was increased surface area for browning…and we all know that the crispy brown parts are the best.  If you have a croquette that falls apart don’t sweat it, but if you want to be sure they stay intact, just use a bit more oil in your pan. 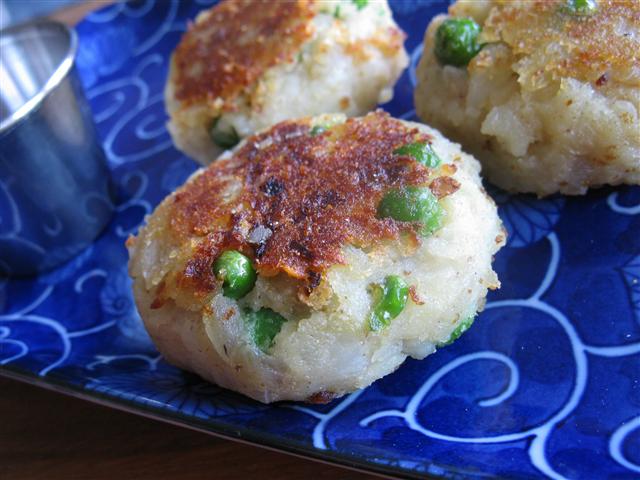 If the peas are frozen, thaw them in a colander so they can drain.  In a small-medium pot, heat 1 TB oil over medium to medium-low heat; add the onion and sauté until softened (about 5 minutes), stirring occasionally.  Add the salt, red pepper flakes, cumin, coriander, garam masala, and black pepper and sauté until fragrant (about 30 seconds).  Remove from heat.

Add the remaining 2 TB oil to a medium (preferably non-stick) skillet over medium heat; when the oil is hot add the potato croquettes and fry until golden brown on each side (about 4 minutes per side), flipping once.  (Don’t flip until the croquettes are a nice golden brown color on the first side; that will help prevent them from sticking.)  If they start to cook too quickly or the pan gets too dry, you can turn down the heat or add a little more oil.  Once cooked, put the croquettes on a paper towel-lined plate to drain any excess oil.

If desired, serve with tamarind chutney, pomegranate molasses, or plain yogurt for dipping. 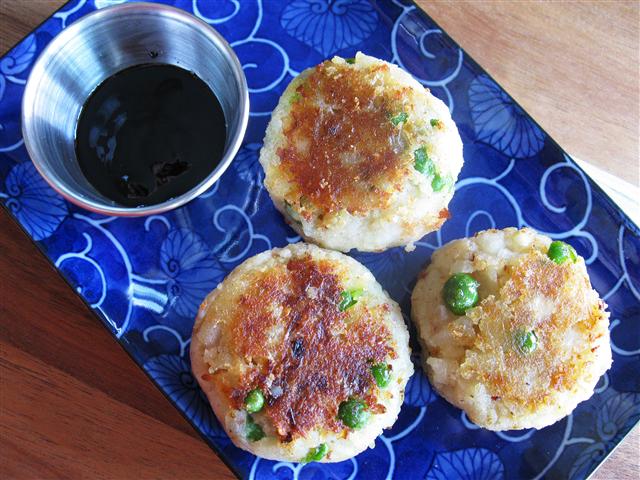 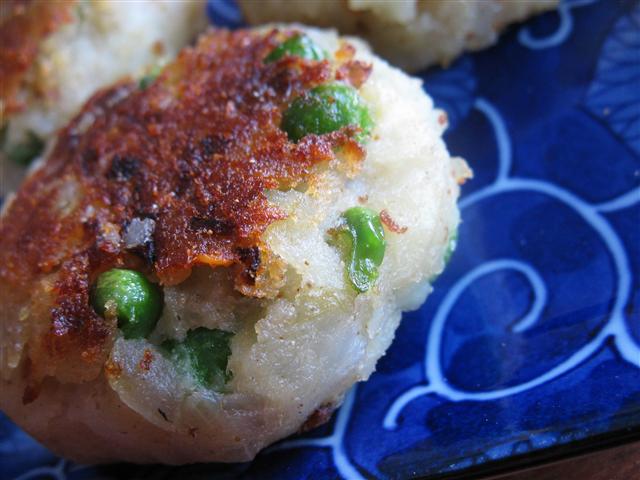