During our stay in Ithaca, Mike and I ate dinner at Kilpatrick’s Publick House, which is a cozy, pub-style restaurant and bar in downtown Ithaca with a huge menu. 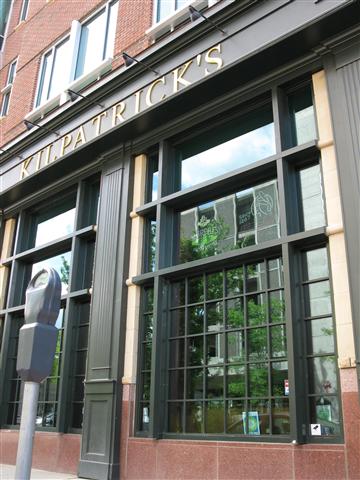 We were initially seated in the front of the restaurant, which is very homey and inviting with a fireplace and a large mural on the wall (and I have to add that there’s good lighting for taking pictures because of nearby windows!).  Unfortunately, there was a table of about 12 rowdy patrons (our waitress told us they had been there for happy hour) right next to us who were so loud that Mike and I had to scream to be able to hear each other.  We ended up moving to a secluded booth in the back of the restaurant, which was very quiet and private but had very dim lighting.

I would have sacrificed the conversation and my hearing (ah, the commitment of a dedicated food blogger, right?) and stayed near the windows for the good lighting, but I was vetoed…which is why I had to use a flash on the pictures.

The service was wonderful – our waitress (Jocelyn) was attentive and the food arrived quickly. 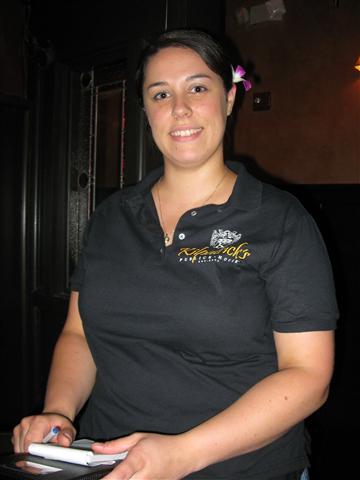 Once we were seated in our private booth, we were served fresh rolls.  The rolls were small (two bites per roll) but delicious.  They had a nice crusty exterior with a yeasty smell, an open crumb, and a slightly sourdough-y flavor. 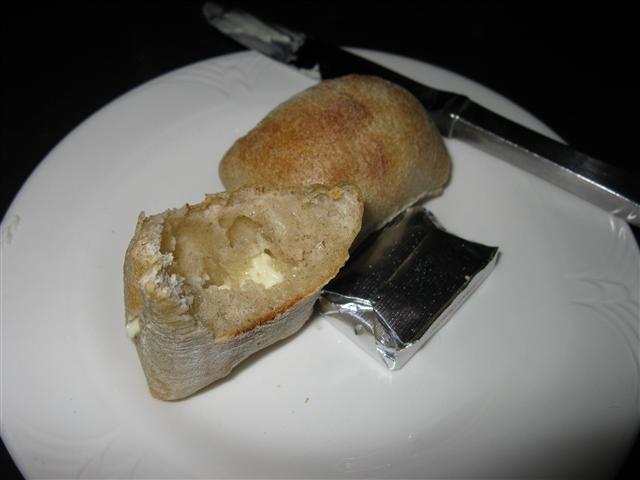 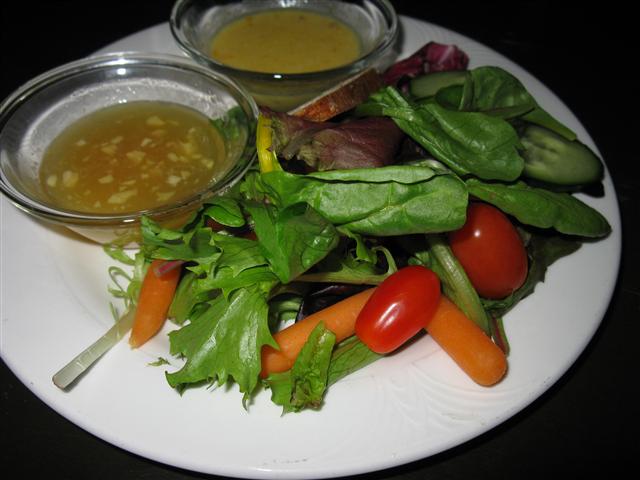 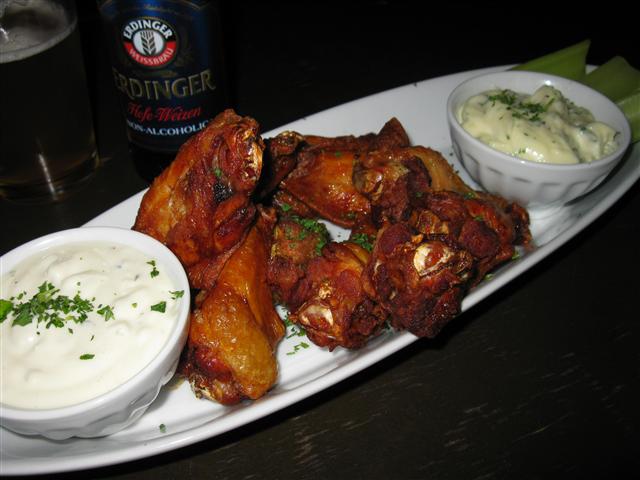 As an appetizer, I ordered the Prata Cake, which was described as:  “A hearty blend of chunky baked potato, blended with fresh herbs, gorgonzola and cheddar cheese then deep fried and served with cranberry and raspberry dipping sauce.” 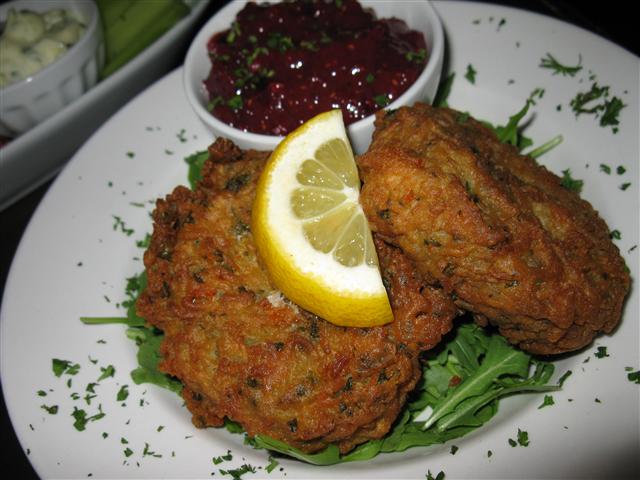 I was pretty disappointed with this dish.  Instead of having a chunky, baked potato interior, it was shredded potato and quite dry.  Also, as you can see, the fresh herbs, gorgonzola, and cheddar cheese that were promised to be inside were very sparse (I actually couldn’t taste them at all).  I was excited for the cranberry and raspberry dipping sauce, as I thought it would have a nice sweet/tart flavor that would complement the cheeses in the cakes well.  Unfortunately, the flavor of horseradish completely dominated this sauce (and horseradish wasn’t even in the description!).  I ended up slathering on some of the herbed garlic aioli instead. 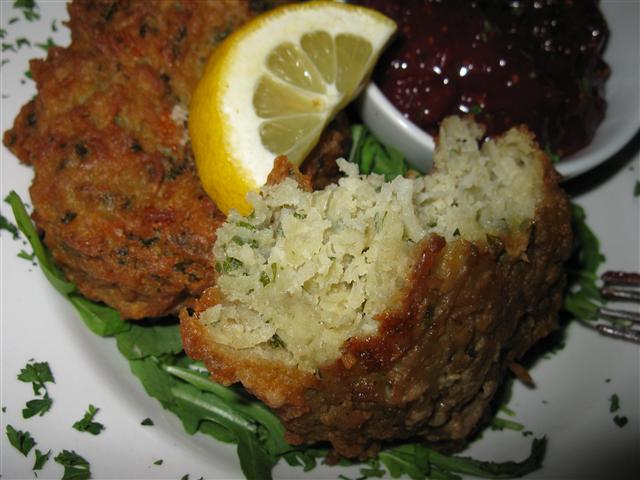 For his main course, Mike ordered the Gaelic Filet, which came with a delicious Brotherhood Cabernet Suavignon Reduction; he substituted French fries for the mashed potato that it was supposed to come with.  The steak was cooked perfectly (tender, juicy, and flavorful) and the wine reduction was the perfect accompaniment to it.  The fries were delicious (especially with the aioli ;) ) – golden and crispy outside and soft and tender inside. 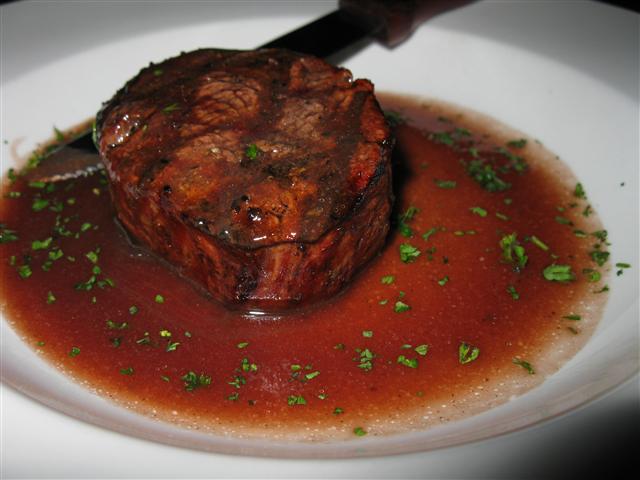 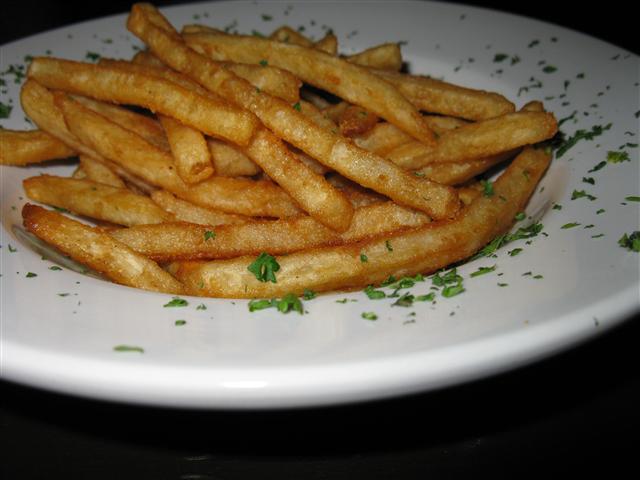 For my main, I wanted to order the Sheppard’s Pie, which sounded amazing:  “Tender Beef Marinated in Jameson Whiskey and Guinness combined with potatoes, carrots, celery and onions topped with creamy potato and our toasted hazelnut crisp.”  Sadly, they were out of it.  Our waitress recommended Corned Beef and Cabbage and I’m glad she did because it ended up being absolutely fabulous. 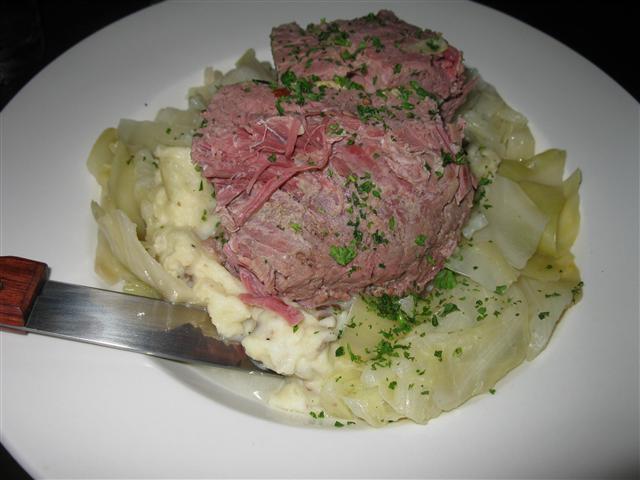 The beef was fork-tender and very flavorful with the corned beef spices.  The cabbage was tender and mild-flavored, and the mashed potatoes were garlic-y in flavor and rustic in texture with chunks of potato and pieces of potato skin included.  It was an amazingly delicious meal, especially topped with malt vinegar.  The portions were very generous also – Mike even helped eat my meal and we still had about two-thirds of it leftover.  And the leftovers were just as fantastic. 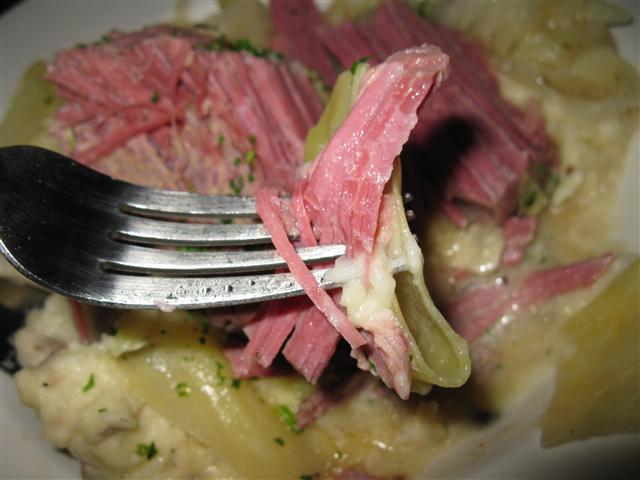 Mike and I both enjoyed this delicious meal and we would definitely go back next time we visit Ithaca.  (I’m still dying to try the Sheppard’s Pie!  ;) )