Recently I’ve been dying for good Pad Thai…it’s literally been years since I last had it.  (My favorite place to get it burned down a few years ago; it was rebuilt and reopened about a year after the fire, but then the restaurant was under different management and ironically the food quality went way down.)   Mike is not a huge fan of Thai food but he was sweet enough to agree to lunch at a Thai place I thought looked cute.  (Plus I assured him that next time he’ll get to pick the place.  ;) ) 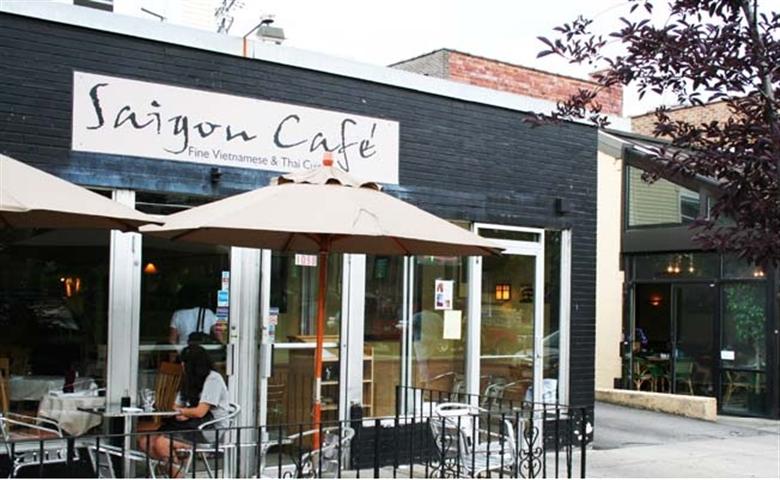 (It was too rainy and dreary outside for me to take a picture; this photo is from Saigon Café)

Saigon Café is a smallish restaurant on Elmwood Avenue in Buffalo, New York, not far from one of the local colleges.  On the day we planned to go, it was a dreary, ominous day so we didn’t have the good fortune of being able to eat on the patio.  Still, it was cute and modern-looking inside.  The menu (including prices) can be viewed here. 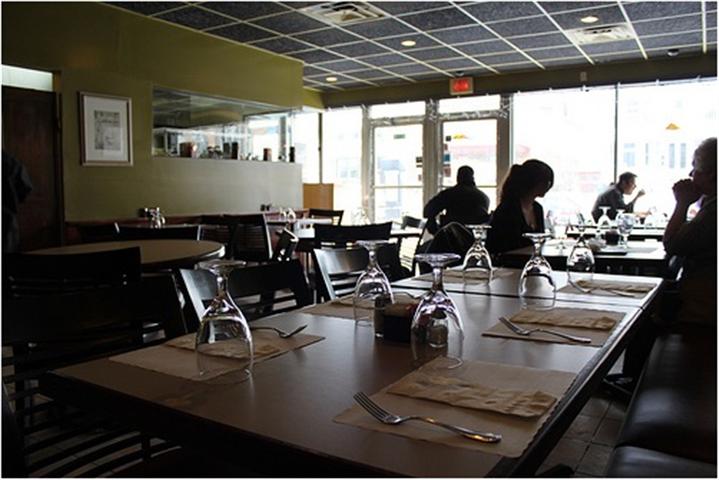 (I actually forgot to take a picture of the inside; this photo was taken by flickr user Shel & Ryan)

The service was excellent – our waiter was fast and attentive.  He poured us very refreshing glasses of lemon-infused water, which Mike and I were both content to drink instead of opting for other beverages.  We ordered two appetizers to start the meal, Chicken Satay and one of the daily specials, the Tempera Vegetables.

The Chicken Satay was marinated in Thai herbs and then char-broiled.  It was wonderfully tender and juicy, and the rich and spicy peanut sauce that came with it was the perfect complement.  It also came with sweet and sour pickled onions, which were surprisingly addictive.

The Tempera Vegetables included a variety of summer squash, zucchini, asparagus, broccoli, carrot, red pepper, baby corn, green beans, and my personal favorites, mushroom and eggplant.  The batter was light and crispy, and the veggies were perfectly cooked.  It was served with a sweet and spicy chili sauce that paired well with the crispy tempera coating. 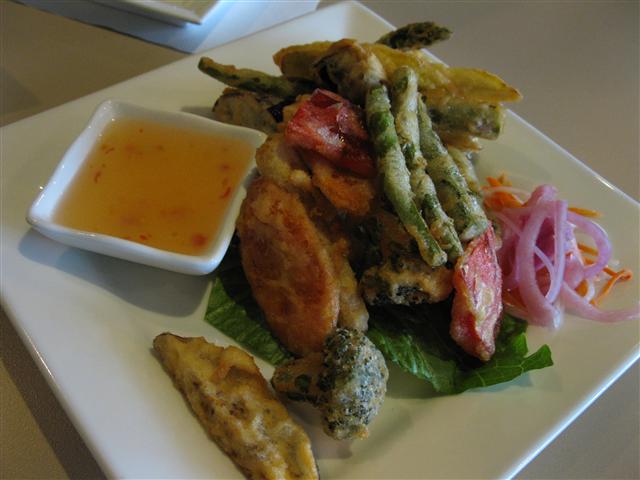 Before ordering our main courses we asked the waiter if lunch-sized portions were available; he told us smaller portions are only available for Monday through Friday lunches.  We were there on a Saturday so we had to order full-portioned meals; this ended up working out ok since we took home enough leftovers for another meal.

Mike ordered the Panang Curry with Chicken, which had red peppers, onions, peas, and scallions in a spicy coconut-curry sauce and was served with steamed jasmine rice.  The spiciness of the sauce was nicely balanced with the sweetness of the coconut.  Mike actually thought the curry was a little too sweet (I did not agree ;) ) so he ended up adding salt to try and mellow the sweetness.  The only complaint I had with this dish was that the veggies were cut very large…much larger than bite-sized actually, which made it a little awkward to eat.  But still, the flavor was worth the extra effort.  I didn’t taste the rice but Mike said it was pretty good. 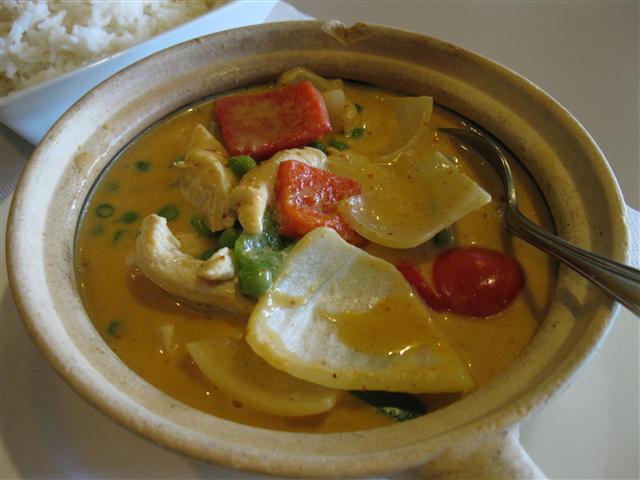 I ordered Pad Thai with Chicken, which is a well known Thai dish made of stir-fried rice noodles with chicken, egg, crushed peanuts, scallion, and bean sprouts.  According to Pim of Chez Pim, Pad Thai sauce is typically made of fish sauce (for salty flavor), tamarind (for sour flavor), palm sugar (for sweetness), and chilies (for spice).  In this Pad Thai, the noodles were light and not at all oily, and the sauce was well-balanced; they were a little skimpy with the peanuts though.  The one thing I really didn’t like about the dish was the chicken, which was overcooked and somewhat rubbery.  At that point I was wishing that I had ordered it with shrimp or tofu instead. 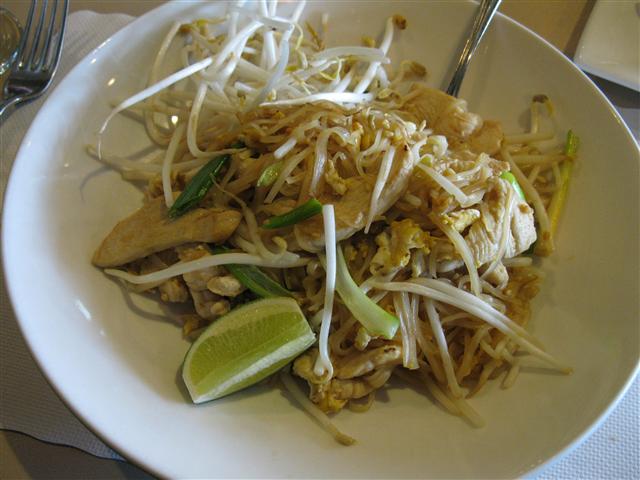 Overall I really enjoyed our meal and would definitely eat here again.  Mike, on the other hand, still isn’t a big fan of Thai food, so next time I’m dying for Pad Thai he’ll probably be at the Indian restaurant next door.  :)

Are you baking this weekend? If you're looking for

Just in case you're looking for a little last-minu

#ad Whether you’re hosting brunch or whipping up

My favorite fall dessert! 🍎 It has apples and o