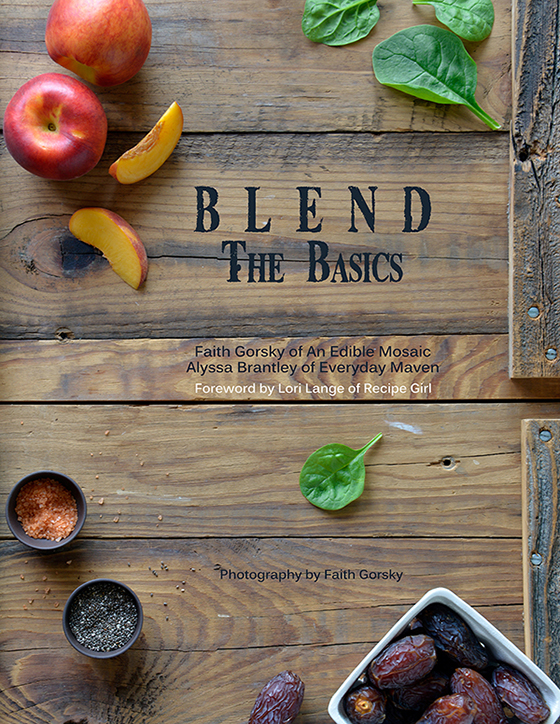 I’m trying not to bounce off the walls ceiling as I write this because I’m so excited.

I’ve been working on a project with the fabulous Alyssa of Everyday Maven for the past year and a half. (Literally.) And I’ve been dying to share what we’ve been up to with all of you for at least the past year, lol.

If you’re feeling snacky, this is a good time to grab a cup of joe and/or something to munch on because this post is a little on the long side…and you don’t want to miss it!

Alright, let’s go back to late winter/early spring 2012. For some reason unbeknownst to me, that was The Winter of the Smoothie for me. I’m not even kidding when I say I was having one or two smoothies a day at least four (and sometimes five) days out of the week…that’s all I was craving! (Check out a What I Ate Wednesday post from March 2012 that shows one of my smoothies. Oh, and check out another What I Ate Wednesday post from December 2012 that shows one of mine and Alyssa’s smoothies…I got a lot of emails about this beauty!)

At the very beginning of my smoothie obsession I was making smoothies the standard way: I’d take any frozen fruit (blueberries, strawberries, banana), fresh fruit (oranges, apples, pears), and/or any vegetables I thought would be good (beets, carrots, and cucumber), and throw them into a blender with whatever milk I had on hand (usually 1% cow’s milk or plain, unsweetened almond milk). But it didn’t take long before my method evolved into a much more crafted approach. As I began eating them more often, I started taking the time to think about what I was putting into the blender and how the flavors would play off of and balance each other, and this type of smoothie became what I craved.

I began adding  pinch of sea salt to every smoothie I made, finding that it really made a difference in balancing a flavor profile and making the smoothie’s flavor pop. I started adding extracts and flavorings, like vanilla bean paste, coconut extract, and almond extract. A little goes a long way and these ingredients helped me in my never-ending thirst for unique smoothies. I also started re-making my favorite desserts (like chocolate chip cookies and blueberry pie) into healthy smoothie treats that are not only chock full of healthy superfoods, but also satisfy a sweet tooth just as well as their unhealthy counterparts.

I started collecting these recipes because I knew I wanted to share them with you. At that point, I just wasn’t sure how yet.

It was around that time that I saw a smoothie posted on Alyssa’s blog. It was a recipe for a PB&J Smoothie. I saw it and immediately thought her recipe looked completely amazing.

More than that, I thought she looked like a kindred smoothie-loving soul.

I emailed her then and there.

I basically explained my smoothie situation, saying I had a bunch of awesome smoothie recipes and I thought she might too (and I was right!), and did she want to partner somehow – maybe via our blogs, in an e-book, or maybe even a printed book? I was pretty thrilled when she did.

We put together an incredible list of our favorite smoothies. And then we started the fun part: we tested them. And tested them again. And then, yup – we did it again. We hand-crafted each smoothie flavor into a gourmet profile that was exactly where we wanted it.

Some flavors are built around a piece of perfectly ripe, fresh fruit (think Vanilla Fig). Other flavors are developed with our favorite desserts in mind (like Chocolate Cake Batter or Cinnamon Oatmeal Cookie). A few are based on popular cocktails turned mocktail (such as Pina Colada), and blended up into creamy smoothie goodness. And we couldn’t forget green smoothies, although we take a different approach to green smoothies…we include all the nutrition of leafy greens like kale and spinach, but re-make them into artisanal flavor profiles like Concord Grape + Greens, which has a hefty dose of both gorgeous Concords and kale, but tastes like the best thick and frosty grape juice you’ve ever had. And there’s no way we’d forget about using coffee and tea as the base for a few smoothies. We came up with healthy versions of a couple of our favorite blended coffee beverages (like Coconut Latte), as well as several fresh, new combos (like Raspberry-Lime Green Tea).

Here’s one of my favorite of our smoothies, Maple Walnut Coffee. It’s flavor was inspired by the popular ice cream flavor and it is every bit as delicious…but unlike ice cream, you can eat this for breakfast and not worry about a sugar crash mid-morning. So, so good! 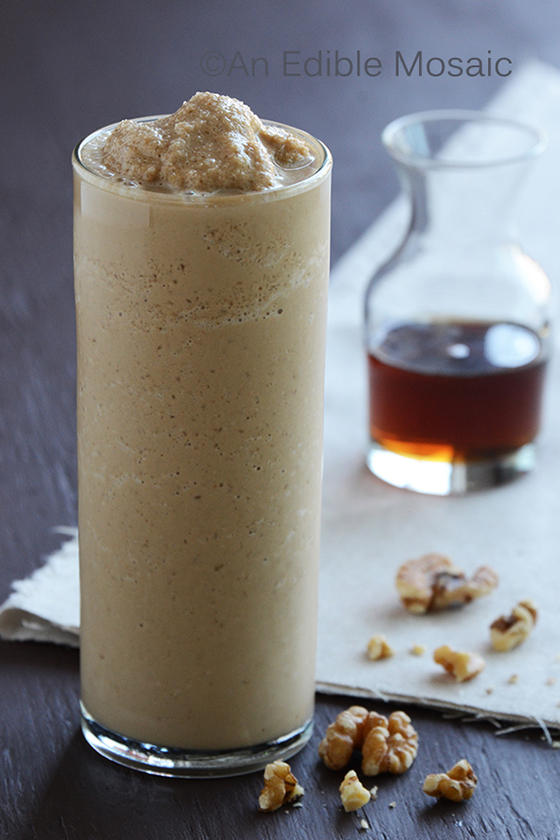 (Just for fun, here are a few of our artisanal smoothies I snapped an iPhone picture of and shared on Instagram: this beauty, for starters; this creamy deliciousness; this fabulous blend that tastes like a tropically-flavored ice cream, but has a full serving of fruit and veggies; ditto for this one, which also tastes like a popular ice cream flavor, but has a full serving of vegetables; and this one, which tastes like candy in milkshake form (really!), but uses a specific spice to get its all-natural flavor.)

As we solidified our recipes, Alyssa and I knew we had to share them with you.

While we were working on recipe development, I am honored to say that I was also busy shooting all the photography for the books…and I had a ton of fun doing it! Part of what is so important to both Alyssa and I is that the book have a full-page color photo for each and every smoothie. I tried to not only set a mood through my photography, but also to depict each smoothie’s unique, hand-crafted flavor profile through the photos I took.

We decided we wanted to contact a couple publishers, so we wrote up a cookbook proposal that we were incredibly proud of. We first submitted the proposal to an international publishing house; we went back and forth talking with them for about six months on the details of the project, and then they made an offer to publish the book. Of course this probably seems like a dream come true for any food blogger, so you’re probably wondering why we decided to self-publish. The publisher wanted to make significant changes to the project that weren’t in line with our vision for it. They wanted to alter our book so that it was more like every other smoothie book already on the market, instead of bringing a fresh, gourmet, artisanal approach to smoothies. In the end, we felt like the integrity of our project was worth more than a contract with the publisher, although we did sincerely appreciate their willingness to publish our book. So we passed on that offer and moved on.

Then we submitted our proposal to a smaller, really interesting publishing house; however, they decided the project wasn’t right for them.

At that point we knew we couldn’t wait any longer to bring this project to you, and we realized that the best way to do it would be to self-publish. Now we are absolutely thrilled to be releasing our book on June 21, 2013…in just one week!!!

We’re actually releasing two e-books; the first is called Blend: The Basics and it contains tons of smoothie-making tips and tricks to make your life easier and your smoothies better. The second e-book is called Blend: Artisanal Smoothies for Food Lovers, Summer Volume 1. It’s a collection of 25 of our absolute favorite summer and fall-themed smoothies in four categories: Indulgence (but like all the smoothie recipes in our book, they are healthy indulgences!), Fruit, Green, and Coffee + Tea. (And nope, we aren’t going to stop there…we have plans for other recipe volumes to be released seasonally!) 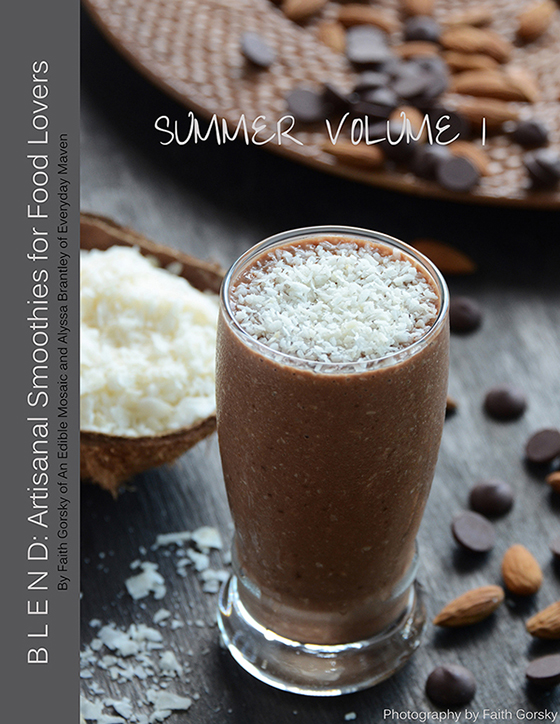 We are so excited about our e-books’ release, we’re planning a pretty fantastic online book launch party (huge thanks to Alyssa for coordinating that – she put an incredible amount of time and effort into it!), and it will take place in just one week on our release day! We’ve asked a few fabulous bloggers to participate, and we’re all sharing more info about the books…and, we’re jointly hosting a huge giveaway with over $1500 of smoothie-related goodies!

I don’t want to give away too much, but as a hint at a pretty exciting item we’re giving away: It starts the letter “B” and the last three letters are “tec”. And it’s something you blend smoothies in. :)

P.S. I just have to say that I’ve had so much fun working with Alyssa. Even though she’s on the west coast and I’m on the east, we found a way to work together seamlessly. Through the rigorous development process, to brainstorming ideas, to super long phone calls and incessant strings of emails…I couldn’t have asked for a better partner!

P.P.S. I have to give a HUGE thank-you to the fabulous Lori of Recipe Girl; we are honored to have her writing our Foreword!!!

#ad Because one of best ways to beat the winter bl

Keeping Venice in my prayers. This would have been