Chaya (of Sweet and Savory Says It All) was kind enough to host our All Through the Year Cheer Hanukkah, so I’ll be sending this dish over to her.  She is now accepting recipe submissions!

According to History.com, “On each night of Hanukkah, the menorah is lit to commemorate a miracle which occurred after the Jews proclaimed victory over the Syrian armies in 165 B.C.E.  When Jews came to rededicate the Temple-which had been defiled by the Syrians-they found only one small flask of oil with which to light the menorah.  This flask contained only enough oil for one day, yet the lamp burned for eight days (by which time a fresh supply of oil was obtained).”  Due to the miracle of the oil, for Hanukkah it is traditional to eat foods that have been cooked in oil…like latkes! 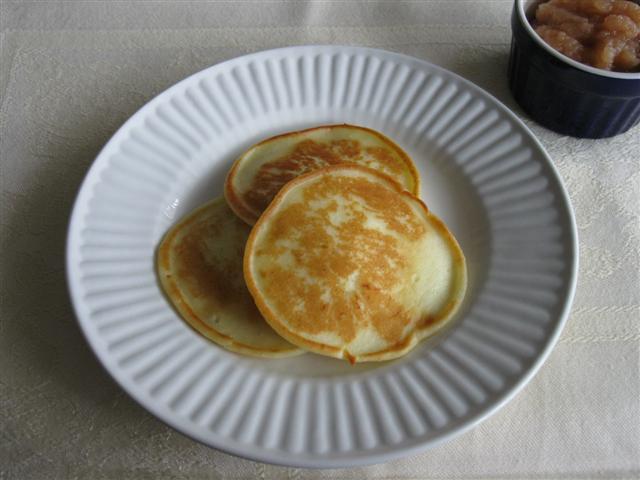 These cheese latkes were so incredible, they took my breath away.  Who knew that something so delicious could be made so quickly with ingredients that I already had on hand?  Although these cheese latkes look like pancakes, they’re sweeter, denser, and chewier.  Their flavor is actually similar to a cheese pastry.  The best way I can describe them is cheese pastries in pancake form.

Susan Portman’s applesauce recipe is brilliant.  She makes an apple liquid by boiling the cores and peels in water and uses that to enhance the applesauce.  Not only does it add incredible flavor, but it also gives the applesauce a rich, rosy color.

I’m so glad that I made this Hanukkah recipe.  It was interesting and a lot of fun to use food as a tool to learn about Jewish customs and traditions.  I had no idea what I was missing before!  If you’ve never had these, I would definitely encourage you to give them a try. 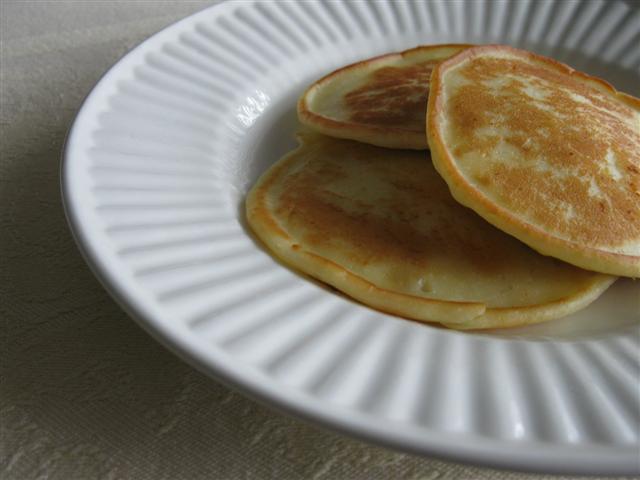 In a blender or food processor, combine the egg, sugar, and cheeses until smooth.  Next add the salt and pulse, then process in the flour.  You might need a little more flour to get your batter to the right consistency…it should have the consistency of a thick pancake batter.

Pour in enough oil to cover the bottom of a large skillet, and preheat the oil on medium heat.  Add the batter (about 2-3 TB of batter per latke) and cook until light golden brown on both sides, flipping once.  (They’re ready to flip when they start to bubble like pancakes and they’re golden on the first side.)  Transfer the cooked latkes to drain on a plate lined with paper towels. 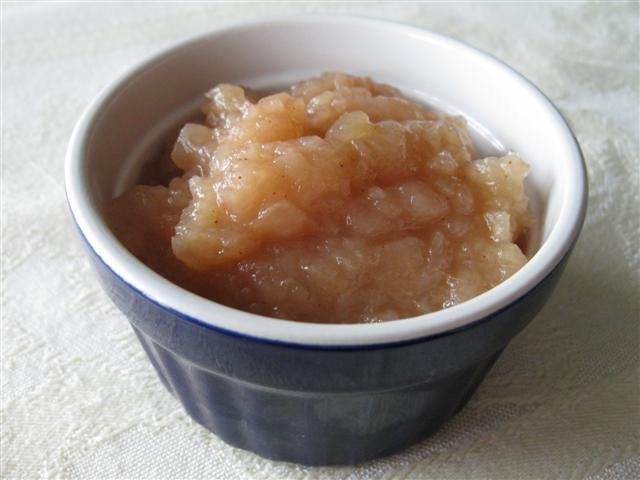 Wash, peel, and core the apples.  Put the peels and cores in a medium pot, cover with water, and cook (covered) over medium heat about 20 minutes until the peels are soft and the water looks like apple juice.  Strain out the peels and cores and reserve the liquid.  (This made about 1 c of apple liquid for me; if you didn’t get 1 c out of this, add enough water to make it 1 c.)

Chop the peeled and cored apples (you should have about 5 to 6 cups of chopped apples) and place them in a medium pot along with the apple liquid.  Add the cloves, and then add cinnamon and sweetener to taste (or you can wait and add cinnamon and sweetener after cooking to see how sweet the applesauce is).  Cook (covered) on medium heat for about 20-25 minutes, until the apples are tender and much of the liquid is gone (stirring occasionally).  Remove the lid and cook uncovered for about 5 minutes to thicken it (stirring constantly).