Is anyone else a huge fan of Cinnabon?  You know, that fantastically delicious, yet diabolically tempting baked goods store in the mall that smells like a cinnamon paradise?  Their cinnamon buns are like heaven, in baked-good form.  Fresh, warm dough, swirled with cinnamon and cascading with sweet cream cheese frosting.  As much as I truly adore Cinnabon, it’s just not feasible to eat it as much as I’d like to (sadly, a Classic Cinnabon roll has a whopping 730 calories…not exactly a girl’s best friend).  So I did what I do best and remade it into a healthy (or at least much healthier!) oatmeal breakfast (or lunch/dinner/dessert, if you so choose).  If you’re a fan of cinnamon buns, give these oats a try…now when I pass the Cinnabon store I can walk by happily (still inhaling deeply, of course), knowing that my Cinnamon Bun Oats can be whipped up in a flash at home. 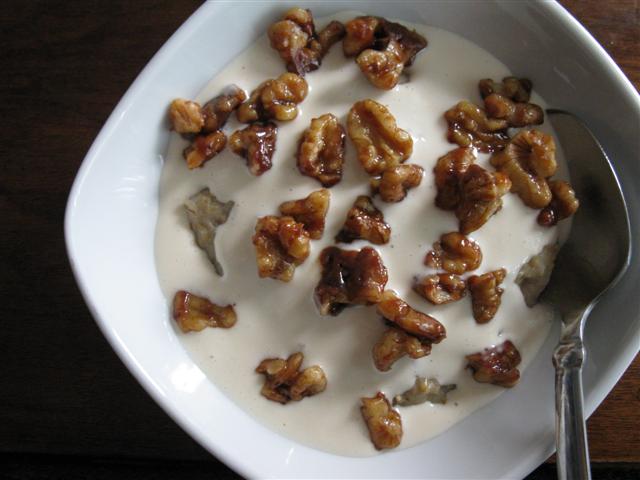 For the nuts:  In a small pan, heat the brown sugar, water, butter, cinnamon, and salt over medium-high heat until it bubbles.  Add the nuts and stir to coat the nuts with the sugar mixture.  Cook for 3-5 minutes until the liquid is mostly gone and the nuts are completely coated.  Spread in a single layer on wax paper and allow to cool to room temperature.

For the frosting:  Whisk together all ingredients.

For the oats:  In a small pan, combine all ingredients and heat on medium-low heat for about 12 minutes (stirring frequently with a whisk) or until it reaches your desired consistency.

Top the oats with the frosting and nuts. 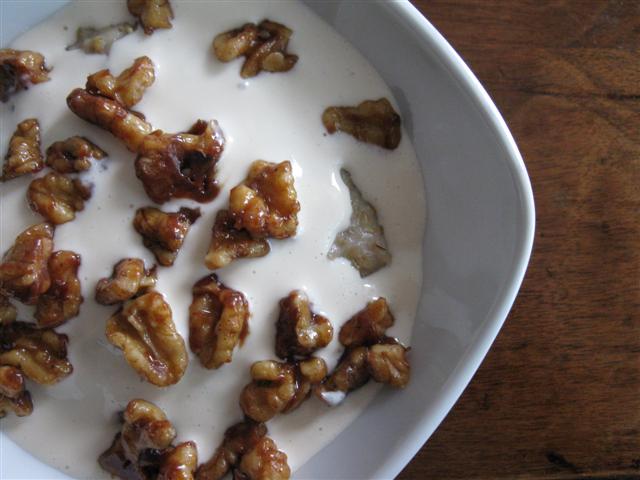