The first time I heard of Welsh Rarebit (aka Welsh Rabbit) was in 2010. I was at the library with my then 6-year-old niece for our regular Saturday “girls’ day out” after grabbing a hot cocoa at Tim Hortons. She was happily playing her favorite game on the computer – Miss Spider – and I was contentedly thumbing through a stack of old cookbooks.

It was then that I happened on a recipe for a dish called “Welsh Rabbit”. I had heard of it before, but I never knew exactly what it was. I always assumed it was rabbit stew or something similar. And because I wasn’t too keen on the idea of eating bunny I never explored the recipe any further.

After reading the recipe in that old cookbook, I was surprised to find that it didn’t include rabbit or meat of any kind. Actually, it looked quite delicious. Welsh Rarebit is basically fondue on toast!

I’ve been making different versions of this dish since then. Sometimes I’ll top it with a poached egg. Other times I’ll wilt some greens like spinach or kale and use them as a bed for the cheese sauce. I’ve played with the type of beer and used lager (light-colored beer) instead of a dark ale. It’s always delicious.

Is Welsh Rarebit the Same as Cheese on Toast?

Well, yes and no.

And the sauce makes all the difference! It’s smooth, rich, creamy, and packed with flavor.

What is Welsh Rarebit?

The sauce is magic.

It starts out with a roux (butter + flour) and then has a liquid added. Typically, a dark ale is used, but you can also use a lager (a lighter colored beer) or even milk. Spices and seasonings commonly include some form of mustard (like mustard powder or Dijon mustard), Worcestershire sauce, and paprika and/or cayenne pepper. And then lots and lots of cheese!

My favorite cheese to use for Welsh Rabbit is sharp white cheddar. But use what feels right to you.

Also, I like to add a splash of heavy whipping cream at the end to make the cheese sauce extra smooth, but this is optional.

Why You’ll Love This Recipe

What to Serve with Welsh Rarebit 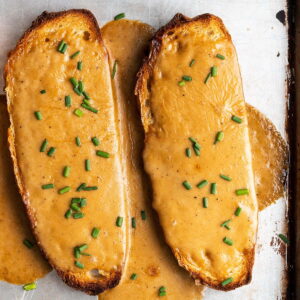 To Make the Cheese Toast:

This post was first published on An Edible Mosaic on February 9, 2010. I updated it with more information on October 6, 2022.