Steak, Ale, and Mushroom Pot Pies make a hearty paleo dinner; you can serve the stew as-is or whip up the quick paleo crust to turn them into adorable little pot pies. 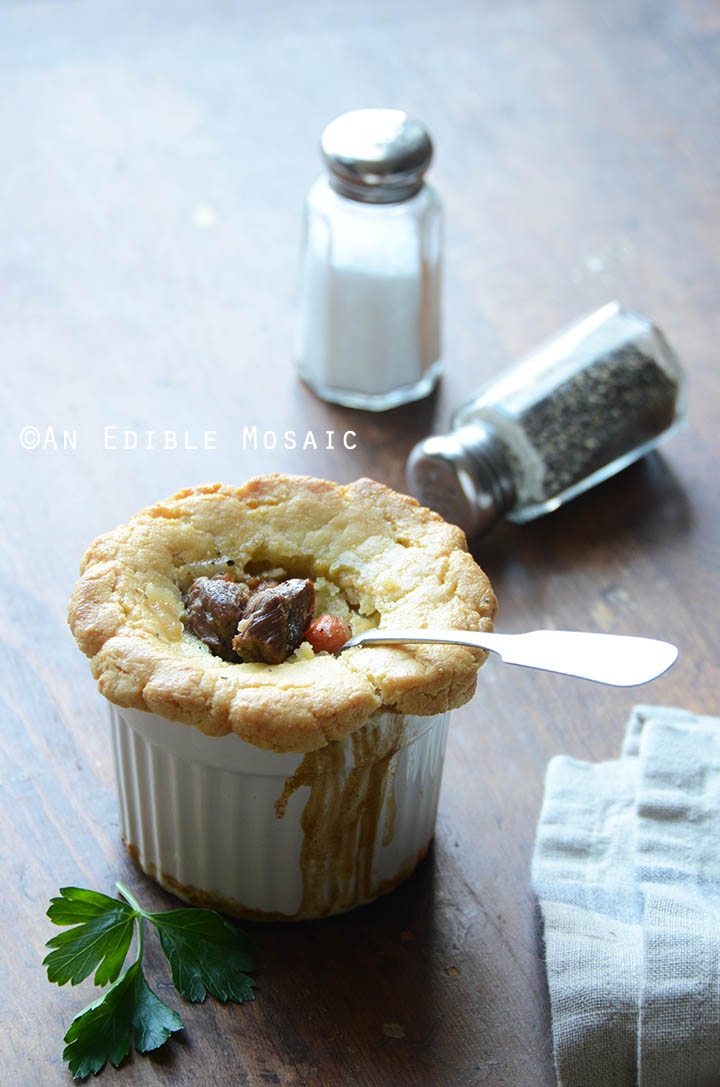 When Liz from Sprouted Routes reached out to me with the idea of working on a collaborative post, I was pretty excited; from early on in our conversation I discovered that we have a lot in common. Liz is into healthy treats, Indian food, and yoga, and she can whip up a pretty fabulous salad. Liz is also a traveler and when she mentioned her love for Damascus, I knew we were kindred souls.

Liz and I spent a couple emails brainstorming what to collaborate over, and in the end we decided it should be travel. Both she and I have a case of wanderlust that we’re happy to indulge when we can. Liz spent quite a bit of time in London, and after mine and Mike’s quick whirlwind trip to London last Valentine’s Day weekend, I knew I wanted that lovely city to be the focus of my post.

Our time there was pretty romantic, actually, or at least as romantic as anything can be when you’ve been married for almost 11 years, lol. It was Mike’s first time there, and my second, and we wanted to take in as much as possible. Here’s a brief recap of what we did in case you’re planning your own trip to London…

Mike and I arrived hungry in the early afternoon and munched on local fare while walking around Borough Market (shout out to Lisa from Healthy Nibbles & Bits for the wonderful recommendation!). At the market, the fresh produce and flowers were gorgeous; there were also lots of vendors selling things like vinegars, spices, meats, cheeses, and bread. There was a huge selection of street food vendors too, and we spent the better part of an afternoon meandering around and sharing little bites of different things that we simply couldn’t pass up. We shared a pulled duck ciabatta sandwich and their famous grilled cheese. We also couldn’t resist picking up a few goodies for the room: doughnuts for the next morning, and my very favorite cheese that I had for the first time in Paris last May – a little round of Saint Félicien – along with some fresh bread and strawberries to enjoy later. 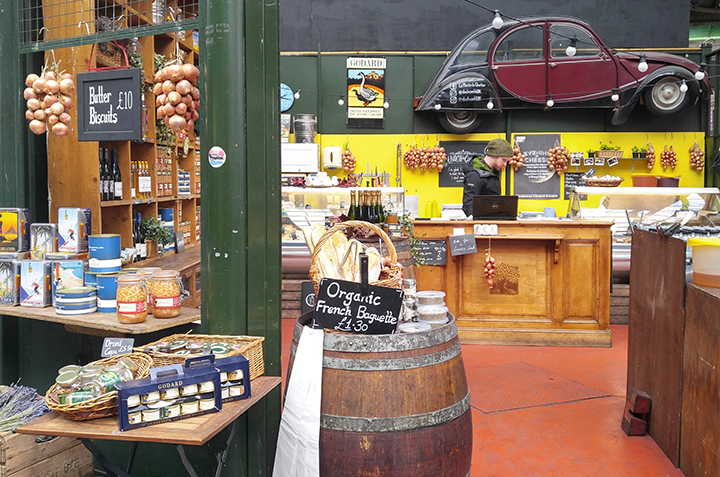 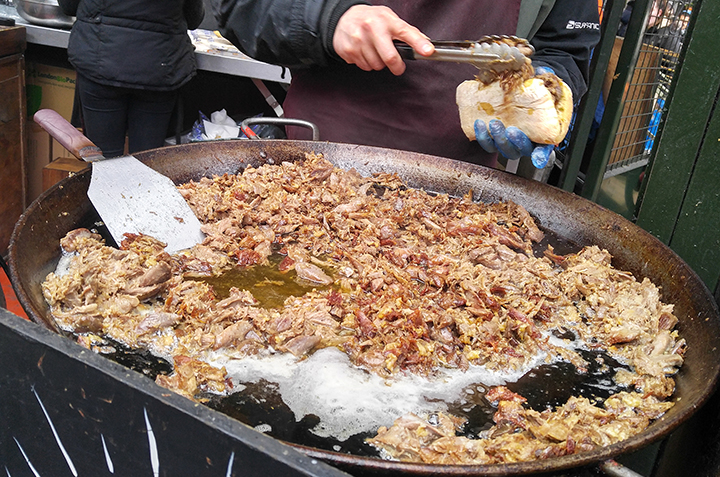 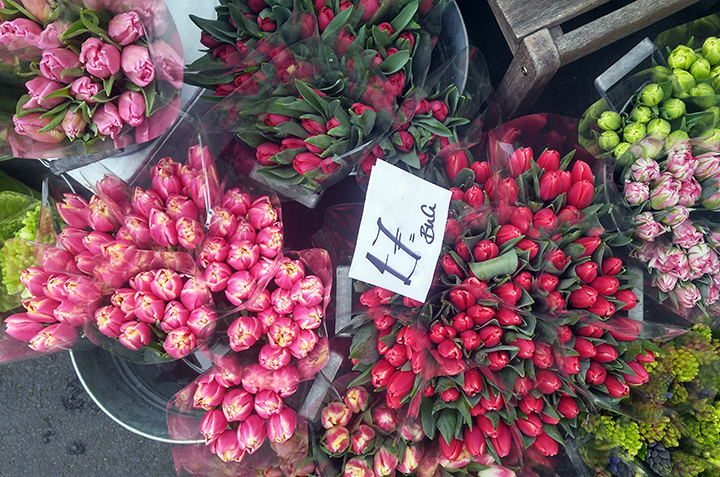 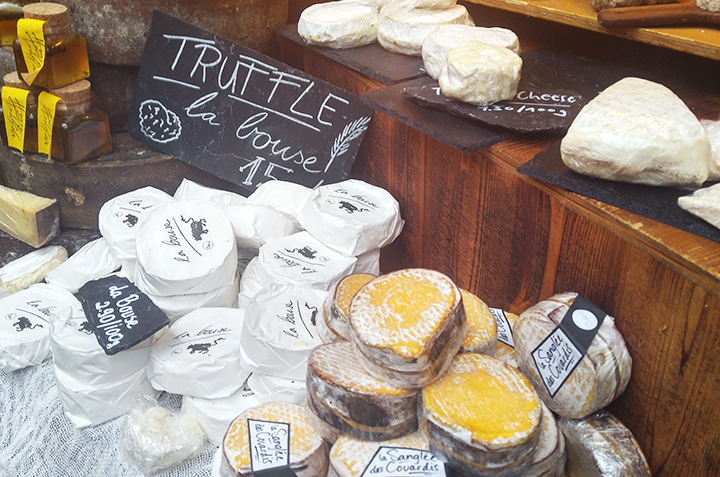 Our hotel was literally right outside the Tower Bridge so we had the opportunity to snap lots of pictures of the Tower Bridge and of the Tower of London, which was a quick two-minute walk away. Mike couldn’t resist getting a cone of fish and chips to eat while we walked along the Thames. 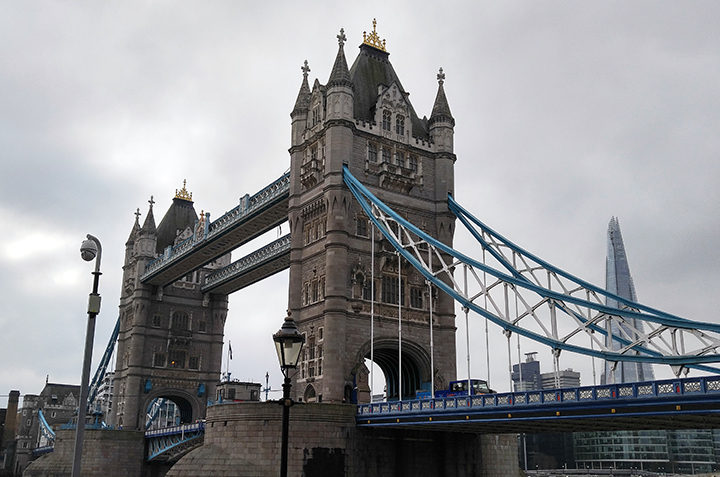 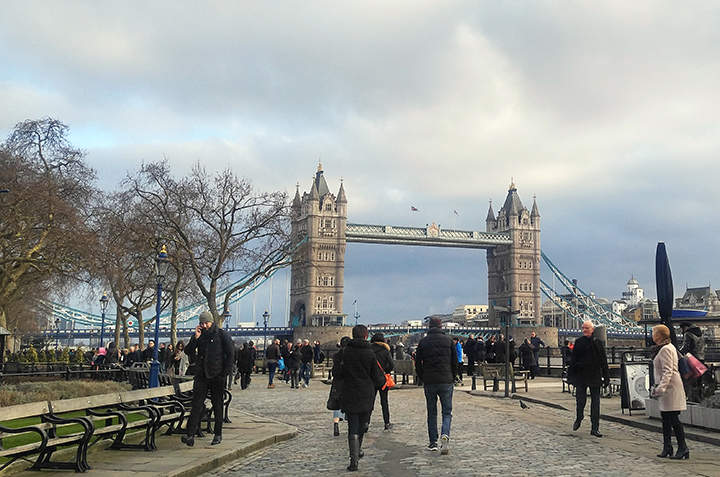 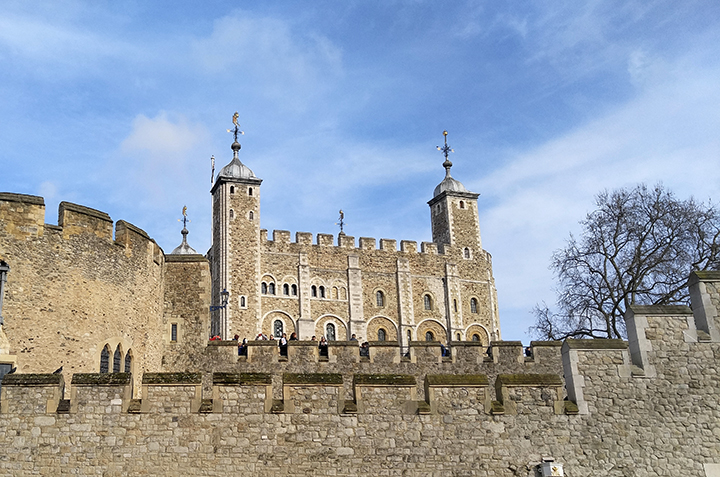 Mike and I took a nighttime tour on a double-decker bus and got to see how beautiful the city was lit up, and we also learned a few interesting tidbits about many of the famous places from the commentary on the tour. Trafalgar Square and Piccadilly Circus were highlights of the tour, and The Shard was an impressive sight. Seeing the Thames at night was breathtaking.

We briefly visited Westminster Abbey, which is one of my absolute favorite places in London, and Big Ben and the Houses of Parliament were of course not to be missed. 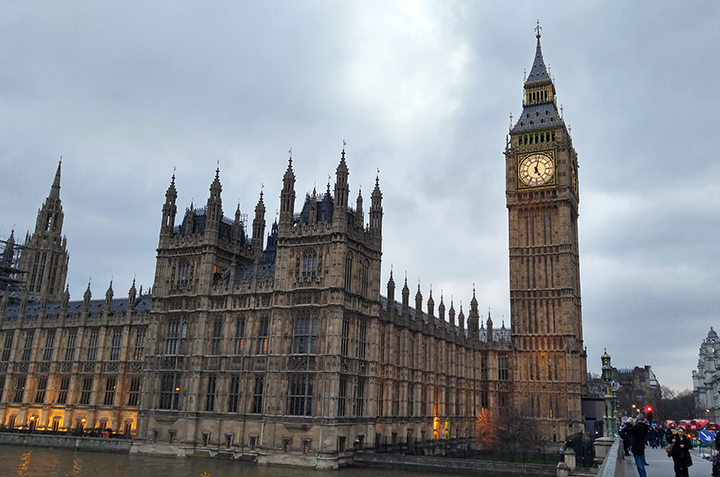 We spent an entire Saturday morning looking around beautiful old Portobello Road, shopping for antiques and all manner of random things that caught our attention. Mike bought me a vintage pair of silver earrings, an elk wool shawl (it was the kind of cold that goes right through you that day, especially since it was misting), and a couple of Turkish bowls, and I picked up a couple of pretty English teacups and saucers. We also paused for coffee and crepes (Nutella and strawberry for him and Cheddar for me) while looking around. 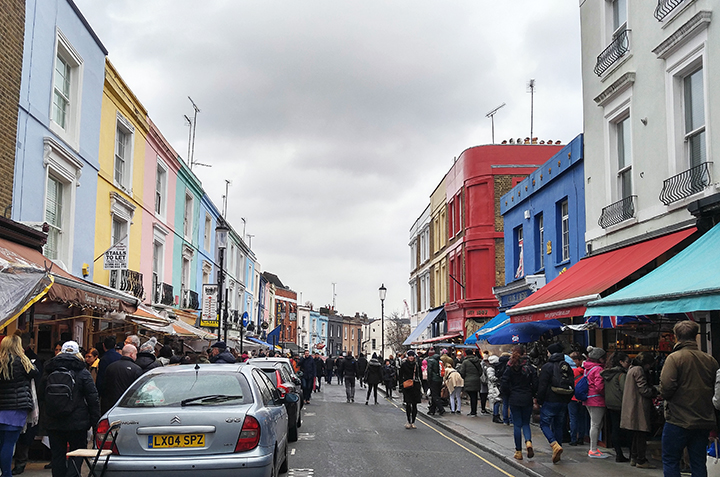 A funny story about shopping at Portobello Road…a large Victorian-era platter drew me in for a closer look (mind you, I know enough not to touch merchandise before I buy it!). I wanted to purchase it, but before I did so, I wanted to ask Mike if (1) he thought we’d have space/weight available in our luggage because it really was quite large, and (2) if he thought it would survive the trip home intact. I turned away from the stall to locate Mike (he was off looking at old books) and as I did so, I heard the vendor tell me Off you go! in a sing-song English accent. I realized that he must have thought I wasn’t going to purchase the platter, lol! Two minutes later I returned, hubby in tow, and purchased the platter, the vendor acting as though nothing had happened. The incident gave Mike and I a good laugh though! 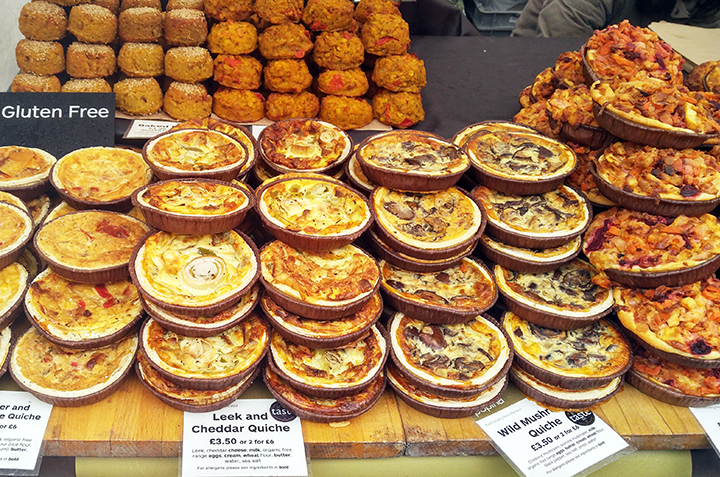 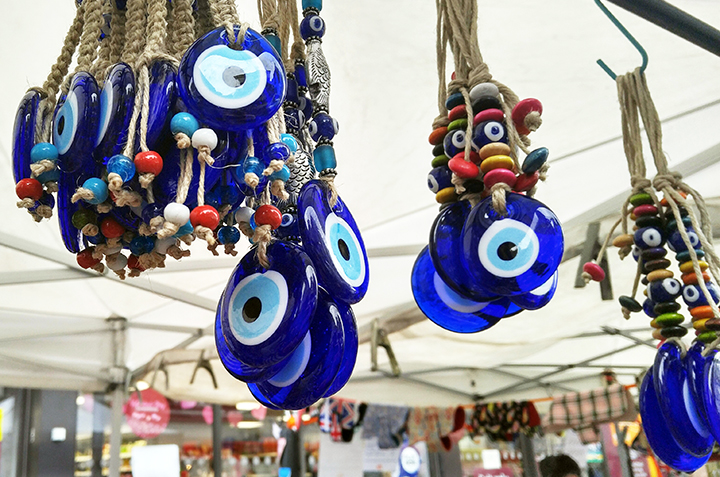 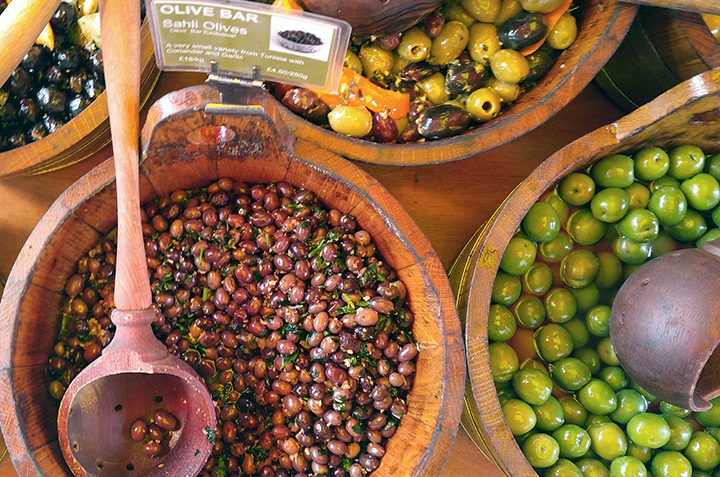 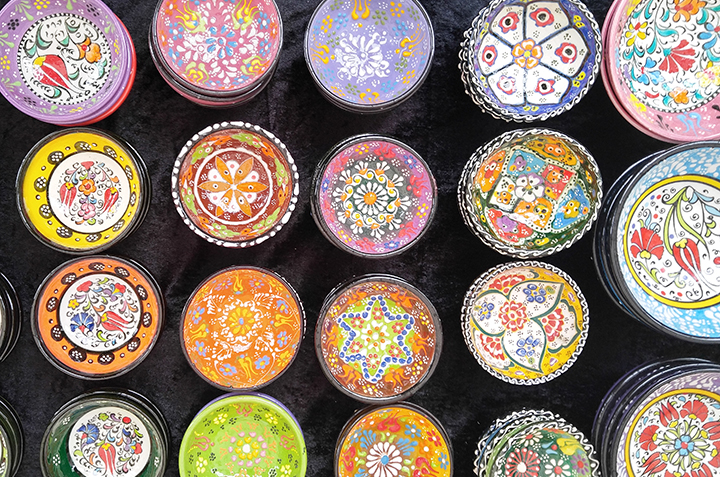 Mike and I popped into Harrod’s for cream tea and to check out the gorgeous food halls, and pick up a few things for friends. 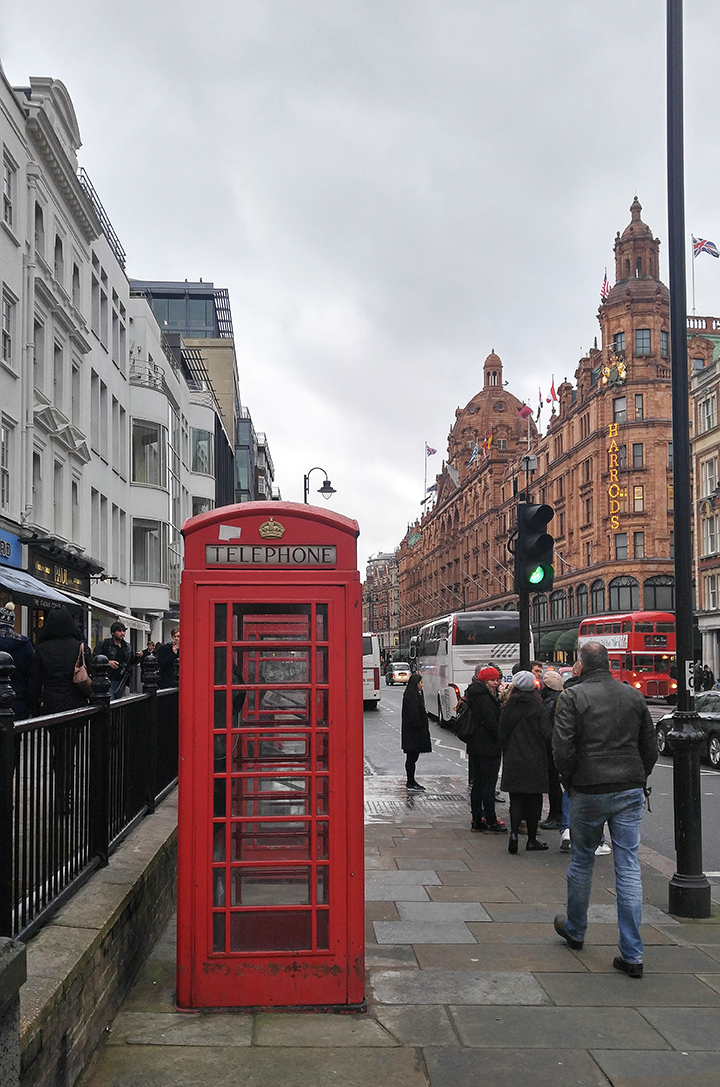 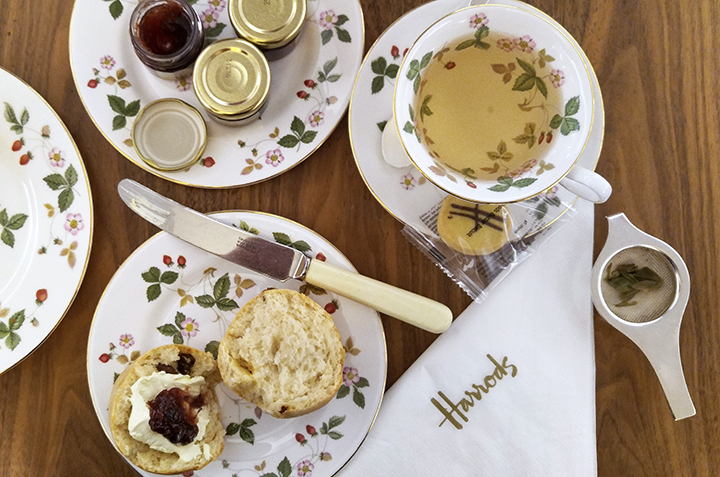 We explored Brick Lane, browsing around the flea markets, produce markets, and international food stalls. The street performances there were fabulous too. Later we enjoyed an Indian feast at Dishoom because we couldn’t come to England and not partake in their national dish (curry!).

Mike and I saw Buckingham Palace in passing, but didn’t have time to stop for a closer look. (Since we had limited time it wouldn’t have made sense anyway, as the Palace is only open while the Queen is away, mid-summer through very early fall.) Here’s an interesting little piece of information if you’d like to know whether the Queen is in residence: if the British Flag (Union Flag) is flying above the residence, then her majesty is not in residence and if the Royal Standard is flying, then she is (more info on that can be found here).

The highlight of our Valentine’s evening was a ride on the London Eye with panoramic aerial views of London. 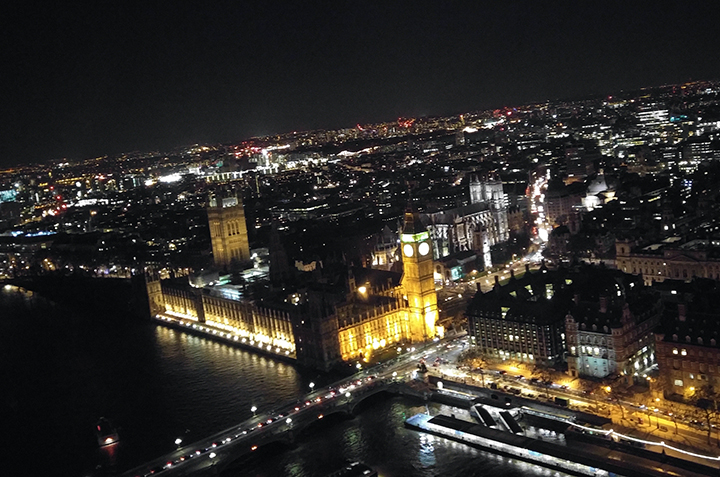 And the last meal we had in London was at restored 16th century English pub in Rotherhithe Village called The Mayflower, which has a rich history and ties to the ship The Mayflower. We went on a Sunday so of course roast lamb dinner was on the menu, which Mike quickly settled on for his meal. I was torn between a few things, so I asked the waitress’ opinion. She said you couldn’t go wrong with fish and chips or the roast dinner, but there were a couple pies that day that looked good as well. She mentioned that the sweet potato and goat cheese pie was a delicious combo, but somewhat “stodgy” (which I learned meant carb-heavy!), but the steak and ale pie was delicious. So for me, steak and ale pie it was! 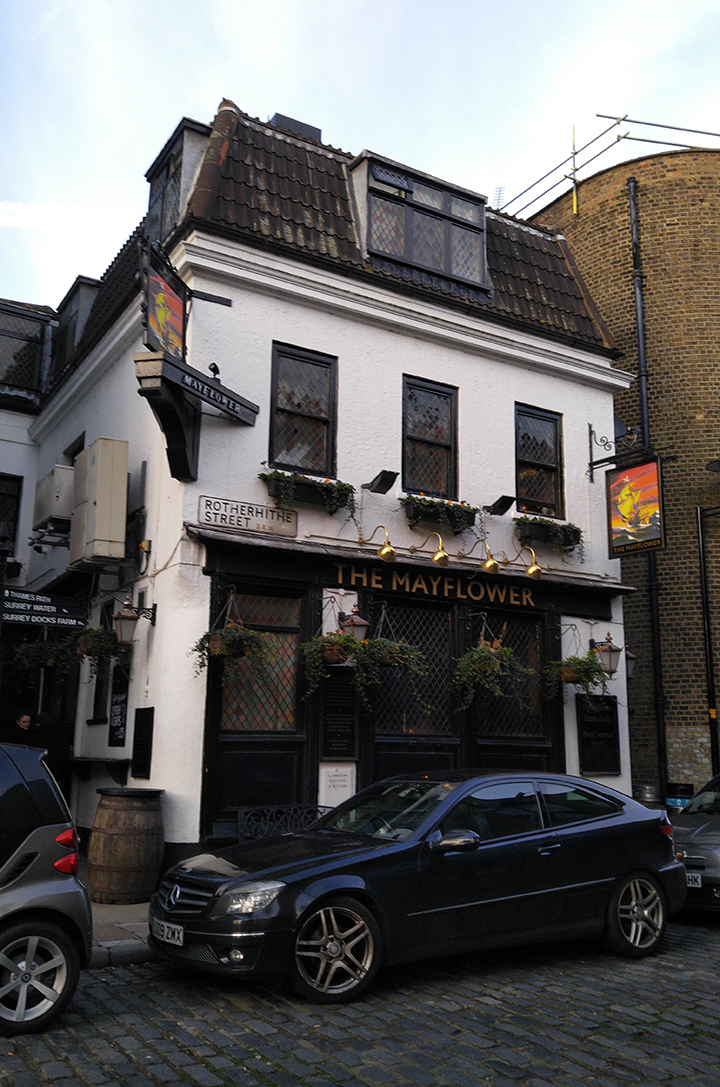 Now, if you’ve been reading my blog for a while you know I’m not going to lie to you. Sadly, the pie was mediocre at best; the meat, being a bit tough, could definitely have benefited from a longer cooking bout. Also, I wish the pie had more vegetables, as onion was the lone veggie and even it was sparse. Surprisingly (because I’m a junkie for good shortcrust pastry), after just a bite or two of the crust I decided it wasn’t worth the calories; it lacked flavor and wasn’t flaky-textured the way a good crust should be. I was happy that I had tried it, but I knew I wanted to make a homemade version…and I wanted to paleo-fy it! 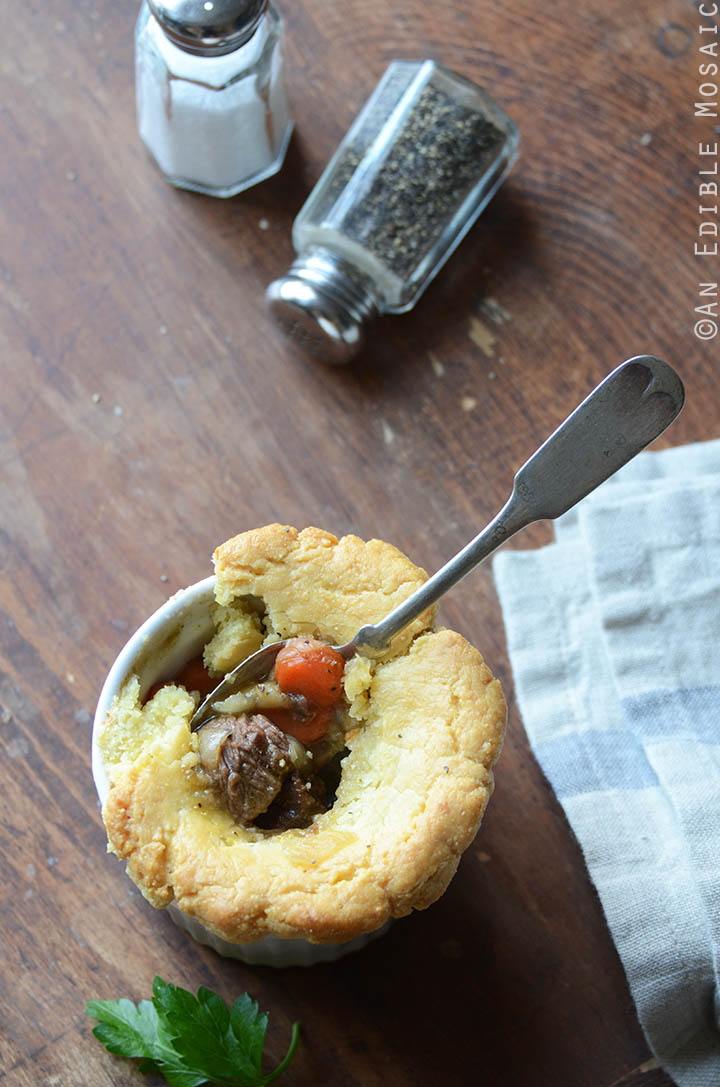 These pot pies are my rendition of that British classic. I started with a pretty basic beef stew and remade it paleo-style. The stew itself is deep-flavored because of the addition of ale and a fair amount of vegetables. It’s comfort food at its finest, even before you top the stew with crust! But the addition of paleo crust is lovely if you want to make it a heartier meal. I can see this becoming a cold-weather staple in my house, and a fun way to remember our time spent in London. 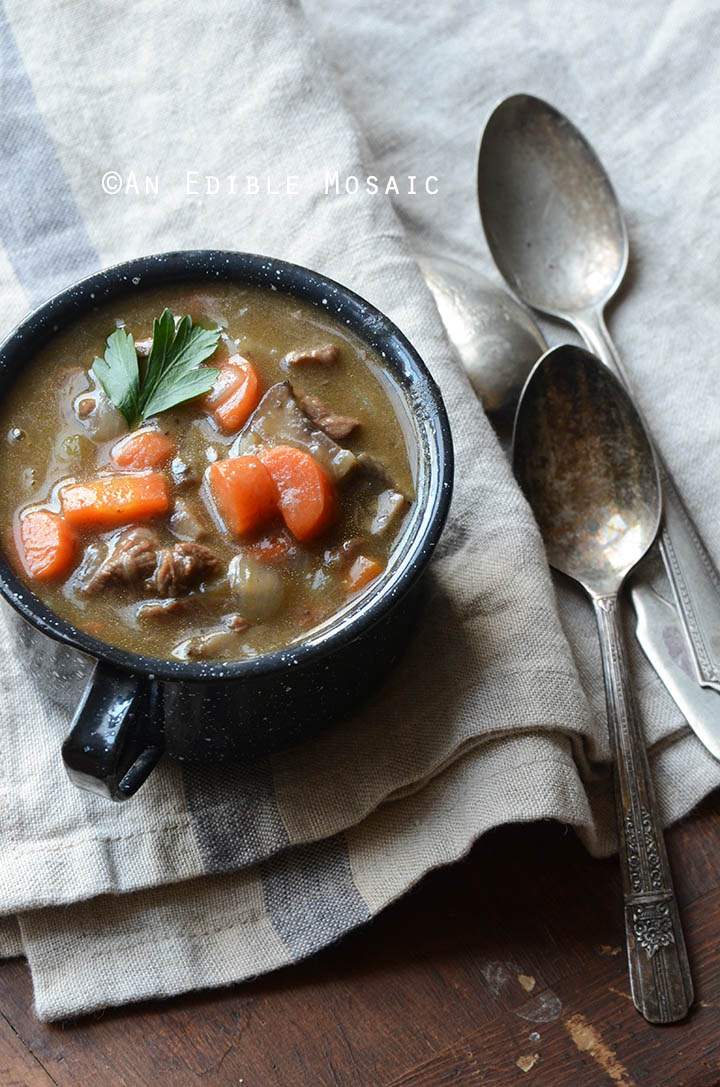 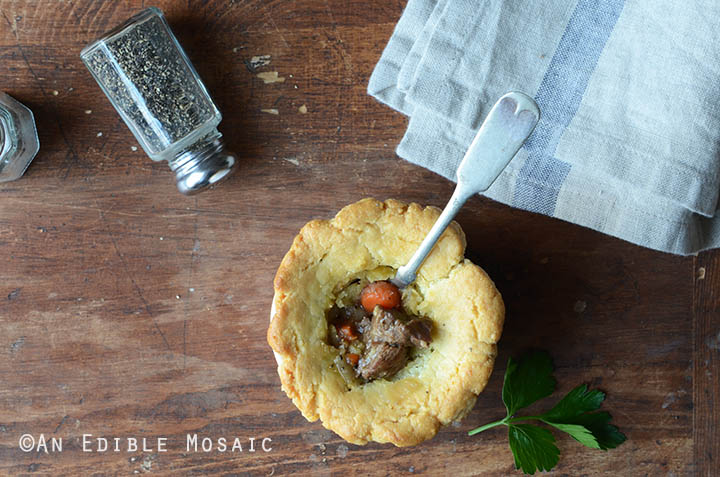 Print
Steak, Ale, and Mushroom Pot Pies {Paleo}
Prep time:  40 mins
Cook time:  2 hours 30 mins
Total time:  3 hours 10 mins
Yield: 4 servings
Steak, Ale, and Mushroom Pot Pies make a hearty paleo dinner; you can serve the stew as-is or whip up the quick paleo crust to turn them into adorable little pot pies.
Ingredients
Stew Filling (makes about 4 cups):
Pie Crust (makes enough for 1 9-inch round pie or 4 individual pies):
Other:
Instructions
Notes
Make Ahead: Make the stew and keep it in the fridge for up to 3 days before making the pot pies.
3.3.3070 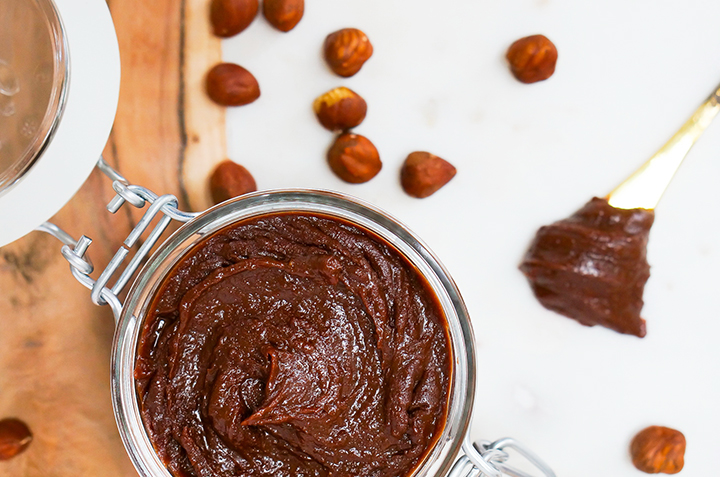 Liz made this beautiful Healthy Nutella for our collaborative travel post! Head over to her blog to check out her post and recipe.

Photography Note: I shot all travel photos in this post with a mobile phone; I would have loved to tote around my DSLR to get better quality shots, but it’s heavy and it just wasn’t feasible. You are welcome to use any photos from this post for educational purposes if you credit me (Faith Gorsky/An Edible Mosaic), with a link back to this page as the source.