Chiavetta’s chicken marinade is a Buffalo, New York tradition that yields tender, moist, and juicy meat. It’s made from pantry staples that you probably have in your kitchen right now!

Growing up in Western New York, Chiavetta’s chicken was the highlight of summer barbeques and camping trips, local carnivals, and the Erie County Fair!

Grilled over a charcoal fire, the chicken has a smoky, savory aroma. One whiff takes me back to cookouts growing up.

My dad manning the grill on the deck in the backyard, and my mom whipping up her tuna noodle salad, potato salad, or famous taco salad in the kitchen.

Dad joking that he can grill anything to perfection – cake included – but today it’s just chicken. Mom asking my sister, my niece, and I for help. Not because she needed it, but because she wanted us with her.

Everyone lighthearted, laughing, and enjoying each other’s company.

One whiff brings me back home.

If you’re looking for the absolute best ever chicken marinade, look no further than Chiavetta’s. It’s tangy, savory, and yields chicken that’s perfectly moist and tender inside with crispy skin outside.

And the marinade is easy to make with ingredients that you probably have in your kitchen!

In the Western New York region, you’ll find charcoal-grilled Chiavetta’s marinated chicken at just about any and every summertime event!

You can read more about the history of Chiavetta’s here.

Step-by-Step Instructions for How to Marinate Chicken

Step-by-Step Instructions for How to Grill Marinated Chicken

How to Store Chiavetta’s Marinade

You can store the marinade covered in a glass jar in the fridge for up to 1 month before using it to marinade meat or vegetables.

How Long Should I Marinade Chicken in Chiavetta’s?

I’m sharing marinade times for boneless and bone-in chicken. Note that timeframes are given as a range; the longer you let the chicken marinade, the more tender and juicy it will be. However, the vinegary flavor also increases with marinade time.

Marinate boneless skinless chicken breasts for at least 15 minutes or up to 2 hours.

Marinate bone-in skin-on chicken for at least 1 hour or up to 24 hours.

Can You Marinade Steak in Chiavetta’s?

Yes! Chiavetta’s marinade is delicious on beef, lamb, and pork as well as chicken. Additionally, Chiavetta’s is great on vegetables!

Why Was My Chiavetta’s Chicken Vinegary?

If your Chiavetta’s chicken tastes overly vinegary, it’s most likely because it marinated too long.

However, note that this is a vinegar-based marinade. Similar to Carolina-style barbeque sauce, vinegar is the base of Chiavetta’s chicken marinade. This results in tender, juicy, and moist chicken!

The longer you let chicken marinade, the more vinegary it will be. Be sure to follow the guidelines for marinade time in the recipe below.

What Goes With Chiavetta’s Chicken?

This chicken goes well with anything that you’d serve along with any grilled or smoked chicken!

Here are a few ideas: 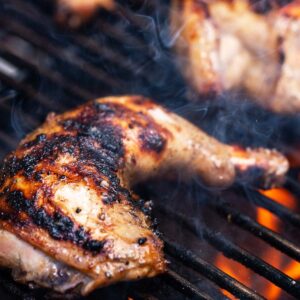 To Make the Marinade:

To Marinate the Chicken:

To Cook the Chicken: