This easy-to-make recipe for the Best Paleo Bread slices well and has great texture and flavor. Use it to make sandwiches or toast it for breakfast!

I know the title of this bread sounds a bit presumptuous, but I promise I don’t mean it that way.

I have to be honest…

I’ve made a whole lot of paleo sandwich “bread” recipes in search of the perfect one. (Side Note: I’m not completely paleo and/or grain-free, but I’ve noticed I feel my best when I limit my wheat intake. Mike doesn’t share my sentiments though.)

There were some recipes I tried that were decent enough and definitely passable as bread-like concoctions, but nothing was stellar. Or even good enough to warrant making a second time (IMHO).

And there were also a few loaves that were actually pretty bad in different ways – either the flavor and/or the texture was just off – that ended up only being fit for the garbage (definitely a sad thing). But that’s how we learn, right?

After searching for the perfect paleo sandwich loaf and not coming up with something that I felt completely fit the bill, I got in the kitchen and started experimenting. Again, some loaves were ok, some were obnoxiously inedible.

It took a month or so, but I finally decided to start playing around with adding a few other paleo-friendly starches, like arrowroot and tapioca. That’s what it took for me to come up with what I consider to be the perfect loaf.

I had been holding out on adding other starches because I wanted to keep my ingredient list minimal, but these additions make all the difference in the end result of this bread.

What makes this paleo bread recipe the best? There are a few factors that do it for me.

For starters, this loaf is perfect for slicing. Its texture strikes a great balance between light and dense. It’s not to heavy, but it’s sturdy enough to stand up to basically whatever you want to use it for. And thanks to the use of arrowroot and tapioca, it’s quite pliable too.

It also has great flavor. Almonds are subtle and the flavors of the other flours blend in well. This bread has a certain richness coming from the eggs and ghee (or coconut oil), which makes it a little bit similar to brioche. In fact, although coconut oil will also work here, I much prefer the use of ghee for its buttery flavor.

It’s versatile. I love this bread toasted with a smear of butter and a spoonful of Sugar Free Strawberry Jam. And it’s equally delicious made into a sandwich.

If you’re like me and have been hunting around for a great paleo sandwich bread, I can’t recommend this loaf highly enough. (And if a sweet paleo breakfast-type of bread is more your thing, I think you’ll love my Paleo Cranberry Bread Recipe!)

Can You Eat Bread on Paleo?

In general, the paleo diet involves eating nutrient-rich real foods, such as meat, fish, nuts, eggs, vegetables, and fruits. It’s best to choose grass-fed and pasture-raised meats, and organic produce whenever possible. The paleo lifestyle removes refined sugars, grains, legumes, dairy, and unhealthy fats and oils from your diet, as well as highly processed foods. (Read more about the paleo diet on HealthLine and EatingWell.)

However, it’s possible to make paleo bread out of nourishing ingredients that are compliant with this way of eating. If whipping up a loaf of paleo bread helps you stay on track, stick to your goals, and avoid eating something that isn’t on your plan, then it’s well worth it!

This recipe for the best paleo bread has lovely texture and flavor. It’s not overly eggy or overly almond-y, and it doesn’t need to be toasted to taste great! Although, a slice toasted and topped with a pat of butter is perfection.

I think there are two things that make a really great sandwich bread:

This bread is wonderful in both aspects; it slices neatly and tastes wonderful as it is.

Paleo baked goods are free of gluten, refined sugars, and dairy. If you’ve perfected regular baking and now you’ve gone paleo, you might be surprised at just how different this way of baking is.

I find that in order to get the closest simulation of regular bread (i.e., bread that has gluten), it’s often useful to use a combination of a few different paleo-friendly flours.

What Flours Are Paleo and Gluten Free?

Here are the most common paleo flours I use, along with a little bit of information about each one:

Arrowroot Starch: You may also see arrowroot starch labeled as arrowroot flour or arrowroot powder. It’s made from tubers traditionally from a plant called Maranta arundinacea, but commercially it’s often found as a mixture of various starches, including starch from the cassava root. Similar to tapioca starch, arrowroot starch is used in paleo baking to improve the texture of baked goods, lightening them up a bit, and help with browning.

Flaxseed Meal: Flaxseed meal is available either in seed form or ground in meal form, and either in brown or golden color. For paleo baking, my preference is ground golden flaxseed meal, which I find yields the prettiest results and the best texture.

Tapioca Flour: Also called tapioca starch, tapioca flour is made from the root of the cassava plant. Tapioca flour is nearly flavorless, so it’s good for using in both sweet and savory recipes. In paleo baking, this flour helps lighten up and improve the texture of paleo baked goods and make them a bit springier, and also helps with browning. This is why I like using it along with other denser paleo flours, such as almond flour.

Almond flour is often considered the “all purpose” flour of the paleo baking world. It’s used to make things like bread, cakes, and cookies with good results.

The only caveat I have is that using almond flour alone can result in a dense baked good, so I typically use almond flour (or almond meal) in conjunction with arrowroot starch, tapioca flour, and/or flaxseed meal to lighten up the texture.

Coconut flour is a great alternative when you need to avoid almond flour because of a nut allergy, or for any other reason. With a couple easy tips, coconut flour can also yield delicious gluten free baked goods.

Coconut flour is very high in fiber and subsequently absorbs a lot of liquid. Therefore, as a general rule, it’s recommended to use coconut flour and liquid at the same ratio.

Coconut flour can also result in very dense and/or dry and crumbly baked goods, so it’s important not to use too much coconut flour, and to use other ingredients to lighten the texture. This is why a lot of recipes that call for coconut flour also call for a lot of eggs. However, then the issue is that the baked goods have an overly eggy taste. Because of this, I prefer to use coconut flour in conjunction with other paleo-friendly flours instead of using it on its own.

What Sweeteners Are Paleo?

Here are some of the most common paleo sweeteners I use:

What Oils and Fats are Paleo?

Here are a few healthy fats and oils that I frequently use in paleo baking:

This recipe for paleo bread is easy to make and if you have a well-stocked paleo pantry, you probably have all or at least most of the ingredients already on hand.

This paleo bread is very easy to make! It’s similar to making a cake or quick bread, and there are really just three steps to make the bread dough (which is really more like batter):

After that, just pour the batter into a loaf pan and bake it!

Is Paleo Bread Keto? What is Keto Bread?

This paleo bread is gluten free, grain free, and free of refined sugars. With just 6g net carbs per serving, this paleo bread may be easy to fit into a keto meal plan.

If you want more keto bread, you might enjoy the Keto Bread cookbook. It has 100 keto bread recipes! 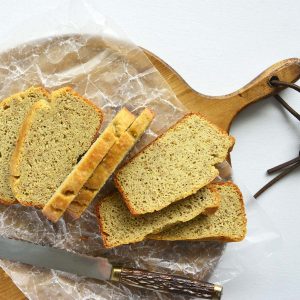 This post was first published on An Edible Mosaic on March 6, 2015. I updated it with more information on March 5, 2021.