The flavor of this Borscht recipe (Russian-Style Beet Soup) is bright and complex, beautifully sweet and sour. The natural sweetness from beets and carrots balance a splash of vinegar added at the end. Beef makes it hearty and filling, and potato and hint of tomato paste add depth and thicken the broth slightly.

Until I made this soup, I have never had Borscht in my life, which is strange because my dad has Russian roots. But what’s even stranger is that I had been craving this soup for a good month before I caved in and made it!

Me and beets go way back, so Borscht is a natural fit for me. I love how beets stain everything in this soup with their lovely deep red color. No matter what’s in your spoonful, it looks like beets.

Of course the beets also stain your cutting board and your hands, but no matter, it doesn’t last long. Wear it like a badge of honor for making this glorious soup.

Beetroots, commonly just called beets, are a nutritious vegetable that are low in calories but packed with nutrients. Beets are full of vitamins and minerals, including B vitamins, iron, manganese, copper, magnesium, and potassium.

According to the USDA Nutrition Database, a 100g serving of beets has the following nutrition information:

Beets may help with chronic inflammation associated with a number of diseases, such as cancer, heart disease, and liver disease. This is because beets contain pigments called betalains that may contain antioxidant and anti-inflammatory properties.

Additionally, nitric oxide increases blood flow to the brain, which may result in better brain function. Even further, nitrates may help enhance athletic performance by making the body’s mitochondria – which are responsible for energy production on a cellular level – more efficient.

Read more about the health benefits of beets on HealthLine and Health.

Can You Put Beets in Soup?

A common question is whether you can put beets in soup. The answer to that is, yes, beets are a wonderful addition to soup!

They add gorgeous color (they’ll even stain the broth red), tons of nutrition, and delicious subtly sweet, earthy flavor. They are a key component of this Borscht recipe.

What is Beet Soup Called?

According to Encyclopedia Britannica,

Borsch, also spelled Borscht, Borsht, or Bortsch, [is the] beet soup of the Slavic countries. Although borsch is important in Russian and Polish cuisines, Ukraine is frequently cited as its place of origin.

I’ve heard that the common spelling Borscht is the Yiddish spelling.

Beet Soup as a Delicious and Nutritious Meal

This soup is so hearty it really doesn’t need meat to be filling. You can omit the meat if you like, but be sure to use a super flavorful stock. The potato will disintegrate into the broth, acting as a slight thickener along with a touch of tomato paste.

The flavor of this soup is bright and complex, beautifully sweet and sour. The natural sweetness in beets and carrots provide the perfect offset for a generous splash of red wine vinegar at the end of cooking.

I think celeriac is a more traditional addition than celery in this soup. However, I went with celery because it’s what I had on hand. (And I’m not claiming that this version is authentic – it’s my own rendition – but it is delicious, and it definitely will be what I make for years to come when a Borscht craving hits.)

Fresh dill and a dollop of sour cream are the perfect finishing touches.

Pro Tip: For the paleo version of this soup, omit the sour cream when serving. Some people consider potato paleo, and some don’t; do what’s best for you.

Borscht derives from an ancient soup originally cooked from pickled stems, leaves and umbels of common hogweed (Heracleum sphondylium), a herbaceous plant growing in damp meadows, which lent the dish its Slavic name. With time, it evolved into a diverse array of tart soups, among which the beet-based red borscht has become the most popular. It is typically made by combining meat or bone stock with sautéed vegetables, which – as well as beetroots – usually include cabbage, carrots, onions, potatoes and tomatoes. Depending on the recipe, borscht may include meat or fish, or be purely vegetarian; it may be served either hot or cold; and it may range from a hearty one-pot meal to a clear broth or a smooth drink. It is often served with smetana or sour cream, hard-boiled eggs or potatoes, but there exists an ample choice of more involved garnishes and side dishes, such as uszka or pampushky, that can be served with the soup.

The version of Borscht that we know today most commonly came from the Ukraine. Traditionally, the soup includes:

How to Make Borscht

Chop the vegetables. Boil the meat and/or bones (usually beef or pork) to make stock. Because of the different cooking times required, the vegetables are usually cooked separately from the meat, and then added into the stock once they’re tender.

In my Borscht recipe, I first sear the meat and then boil it until nearly tender.

Then I add the vegetables to the soup during the last 30 minutes that the beef boils, so everything will finish cooking at the same time.

There are also several versions of Borscht that don’t contain beets. The common trait they share is a tart flavor.

Another example is white Borscht, which contains a fermented mixture of rye flour or oatmeal and water.

Cold Borscht uses different vegetables, and usually has some kind of dairy added, such as sour cream, kefir, and/or buttermilk. Here’s my recipe for Cold Beet Soup.

Many different regions of Eastern Europe showcase their own Borscht recipe, and I’m sharing a few of them here.

The soup that we commonly refer to as Borscht is probably closest to Ukrainian Borscht. It typically contains boiled meat or bone broth, cabbage, beet, carrot, onion, sometimes potato, and tomato or tomato paste. However, there are many regional variations of this dish.

Alternatively, there is a Polish clear Borscht recipe typically served during the Polish Christmas Eve supper. This Borscht recipe variety is made from fish stock instead of meat stock, and the mushrooms are reserved as filling for ear-shaped dumplings, which are served with the soup. 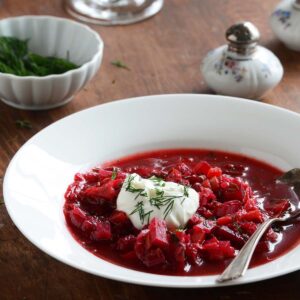