This Cast Iron Skillet Cornbread recipe has a rich, sweet buttery corn flavor, and is crisp and golden along the outside with a soft, tender, and moist crumb inside. It’s cornbread perfection served up in a skillet!

Cornbread is one of those things that a lot of people are pretty picky about. And there’s nothing wrong with that!

There’s a lot of variation in cornbread depending where you’re from. On one hand, there’s Northern cornbread with sweet flavor with a moist, tender crumb. And on the other hand we have Southern cornbread, which isn’t sweet and has a dry, crumbly texture.

This Cast Iron Skillet Cornbread recipe is for moist, sweet cornbread. It has a rich buttery flavor with a good amount of sweetness that really pulls out the naturally sweet flavor of corn. The texture is fluffy and moist, similar to cake.

With inspiration from my Cornbread Muffins Recipe, it still took me a couple tries to come up with the perfect cornbread! But it was absolutely worth it. Give this cornbread a try and if you’re a fan of sweet moist cornbread, it’s sure to become your favorite recipe too.

Not only is this cornbread the best in terms of flavor and texture, but it’s quick and easy to make! It’s also versatile. Serve it up with any number of things, such as BBQ chicken, beef brisket, or chili. Or slather it with salted butter and a drizzle of honey and enjoy it as-is!

This recipe uses a cast iron skillet, but you can use any oven-safe dish that’s about the same size.

Once the cornbread is cooled, cut it in pieces to remove it from the cast iron skillet. Put it in an airtight container and store it at room temperature for up to 2 days.

Pro Tip: I don’t recommend leaving cornbread in a cast iron skillet because it starts to have a noticeable irony flavor after the first day.

After 2 days at room temperature, you can store cornbread for up to 5 days more in the fridge.

Alternatively, you can freeze it! Let it cool to room temperature and then wrap it in freezer paper, and then foil or plastic wrap, and then place it into a zip-top plastic bag. Label the bag with the date and contents and freeze for up to 3 months.

How to Reheat Cornbread

If your cornbread was frozen, first let it thaw to room temperature before reheating. You can reheat cornbread in the oven or in the microwave, but my favorite method is the oven.

To reheat it in the oven, wrap it in aluminum foil and place it in a preheated 350F oven until warm, about 10 to 15 minutes.

To reheat it in the microwave, place a piece of cornbread on a microwave-safe plate, drape a damp paper towel on top and microwave it until warm, about 20 seconds.

How Do I Make Cornbread Moist?

If you’re looking for a moist, tender cornbread recipe, you’re in the right place! There are a couple tricks to making moist cornbread:

Should Cornbread be Sweet?

Like many regional favorite foods, that is a question that depends on who you’re asking and where they’re from.

What is the Difference Between Northern and Southern Cornbread?

Which is better? That is entirely a matter of personal preference! They are two very different things. I much prefer the flavor and texture of Northern cornbread.

This Cast Iron Skillet Cornbread recipe is my take on Northern cornbread. It has a rich, sweet buttery corn flavor, and it’s crisp and golden along the outside with a soft, tender, and moist crumb inside. It’s cornbread perfection served up in a skillet.

You can read more about the difference between Northern and Southern cornbread on Chef’s Corner Store and read about the history of cornbread on Serious Eats.

What Can I Use if I Don’t Have a Cast Iron Skillet for Cornbread?

You can use an oven-safe dish around the same size. A cast-iron Dutch oven about the same size works very well.

Pro Tip: You may need to adjust the cooking time if you use a pan that’s a different size or different material. 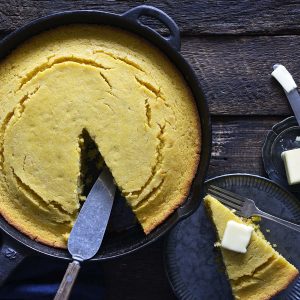