This Vegan Baked Beans Recipe is a perfect balance of sweet, smoky, and salty flavors with a slight tang. It’s basically a meat-free version of Boston Baked Beans, but it comes together in a fraction of the time. It’s the perfect side dish for anything you grill up!

I confess, I’ve never been one to be all that sad when Labor Day rolls around.

Yes, I like summer (as much as any Buffalo-born-and-raised-girl can). But in all honesty, I love autumn way too much to be disappointed about summer’s end.

And don’t even get me started about the first snowfall! I look forward to it every year the way a kid looks forward to summer vacation or a trip to Disney. What can I say? Buffalo is in my blood.

But still, it feels appropriate to memorialize the (unofficial) end of summer with a seasonally-appropriate dish. Now, truthfully, I don’t know why we don’t eat baked beans year-round (they’re a substantial, hearty dish), but in my family they’re a strictly summer-only side.

This Vegan Baked Beans Recipe goes well with anything you could think of grilling up, from hot dogs to tuna steaks. And baked beans travel and re-heat perfectly, making them picnic, potluck, and BBQ-friendly.

My mom is usually the baked beans maker in our family. She got a killer recipe from her dad, and put a few of her own tweaks on it. When I recently asked my mom for her recipe, she recalled it from memory, having made it so much.

Those are the recipes I love; the foods that shape your childhood and take you back every time you smell them filling the kitchen with their rich aroma.

Let’s talk about Boston Baked Beans for a quick minute.

They’re typically made with either Great Northern or Navy beans flavored with some kind of pork and molasses. And Boston Baked Beans usually cook a very, very long (like eight hours long) time.

For this vegan version, I made a couple changes to a classic Baked Beans recipe.

First and foremost, if you’ve been following my blog for any length of time you’ve probably noticed that hubby and I don’t eat pork, so I went vegan here. (Just be sure to use vegan Worcestershire sauce and you’ll be good to go for the vegan version.) I mimicked the same lovely smoky flavor that bacon provides by using hickory smoked sea salt.

Pro Tip: If you can’t find hickory smoked sea salt, you could also use smoked sweet paprika or even smoked tea (like lapsang souchong).

Additionally, I scaled back a bit on the amount of molasses and sugar that my mom uses in her recipe. However, the beans didn’t suffer for it! They boast a very balanced flavor profile.

I also tweaked the cooking time so that you don’t need to spend eight hours or more cooking these beans. (Because who has time for that in this day and age? Two and a half hours is quite long enough!)

And lastly, I scaled way back on the size of this recipe because sometimes you just need a smaller batch instead of enough baked beans to feed an army…twice.

Is There Ketchup in Baked Beans?

In this recipe, yes!

I want to bring attention to the ketchup here because I doubt it’s an ingredient in the original Boston Baked Beans recipe. My mom adds it to her recipe and I don’t think the idea is completely out in left field.

I’ve seen a lot of Boston Baked Beans recipes that call for tomato paste, vinegar, and sugar. And really, what is ketchup if not these same ingredients cooked down?

My point is, trust me and add the ketchup; it adds incredible depth of flavor here!

Beans themselves are a vegan food and this recipe for Baked Beans is also vegan.

If you’re looking for pre-made baked beans, be sure to read the ingredients on the label to make sure they’re vegan.

More Side Dishes to Bring to a Potluck 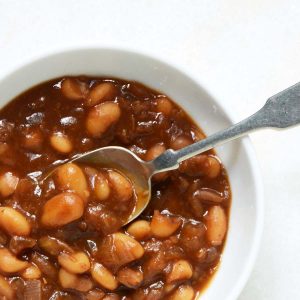 By: Faith Gorsky
This Vegan Baked Beans Recipe is a perfect balance of sweet, smoky, and salty flavors with a slight tang. It's basically a meat-free version of Boston Baked Beans, but it comes together in a fraction of the time. It’s the perfect side dish for anything you grill up!
Print Recipe Pin Recipe
Prep Time 15 mins
Cook Time 2 hrs 30 mins
Course Side Dish
Cuisine American
Servings 6 servings
Calories 207 kcal

This post was first published on An Edible Mosaic on September 7, 2015. I updated it with more information on June 25, 2021.