This flavorful and juicy Jamaican Jerk Chicken Recipe is a great way to celebrate grilling season, but it’s equally delicious cooked in the oven year-round. This version is paleo, and with just 4g net carbs per serving it’s also low carb and keto!

In the seemingly endless variety of ways to cook chicken, it’s fun to take a little global inspiration.

With a complex blend of savory spices, a touch of heat, depth from soy sauce, and the freshness of lime, Jamaican Jerk Chicken is a hard dish to pass up.

Serve this up with Black Beans and rice, or Coconut Sesame Rice and Mango Black Bean Salsa. And if you want to go all out, you could grill up some pineapple or fry up some plantains to go along with the meal!

The main thing that makes Jamaican Jerk Chicken special is its unique spice blend. Once you get that right, you can use any dry heat cooking method you like to cook the chicken.

Additionally, I noticed that soy sauce and scallion are common additions along with the Jamaican jerk seasoning blend.

Finally, it’s traditional to include spicy peppers, such as Scotch Bonnet, which by all means add if you’re into really hot foods. I keep this dish a little more kiddo-friendly and just use a touch of heat from cayenne pepper and crushed red pepper flakes.

I’ve noticed slight variations in different Jamaican jerk seasoning recipes. Some will have more of a heat level, or others will have more warm spices (such as cinnamon).

However, in general I’ve found that the following ingredients are usually included in varying amounts:

In terms of the heat level, I kept this more on the mild side, but feel free to adjust the heat level up or down based on your personal preferences.

How to Make Jamaican Jerk Chicken From Scratch

How to Cook Jerk Chicken

Roasting in the Oven:

Jerk refers to a Jamaican cooking method, in which jerk spice mix is used as a dry rub or wet paste to season meat, like chicken or pork.

According to The Kitchen Project, food historians think that jerk is a Spanish word that originated from the Peruvian word charqui, which refers to dried meat strips (basically, jerky). The word started as a noun and became a verb, as in “jerking”, which means to poke holes in meat so spices can permeate.

What is Dry Rub?

A dry rub is a mixture of dried herbs and spices that is rubbed directly onto meat, such as chicken or steak.

Usually, dry rub is used with a dry heat cooking method, such as grilling, smoking, or roasting.

Many dry rubs contain sugar and salt for a balanced flavor profile, as well as several other spices, such as paprika, cumin, etc.

How Can I Tell When Chicken is Fully Cooked?

Insert an instant-read thermometer into the thickest part without touching the bone; it should read 165F.

Additionally, the meat should be white and not pink, and the juices should run clear.

What Part of the Chicken is Dark Meat?

On a chicken, the drumsticks and thighs are dark meat and the breasts and wings are white meat.

The more myoglobin (the oxygen-binding and transporting protein found in muscle tissue), the darker the meat. Dark meat is higher in calories and fat, as well as vitamins and minerals. Additionally, dark meat is usually prized for being juicier and richer in flavor than white meat.

Read more about dark and white meat chicken on Women’s Health and Chicken.ca.

Jamaican Jerk Chicken is an easy recipe to keep low carb. In order to keep the carbs as low as possible, the main alteration I make from a traditional jerk chicken recipe is to omit the sugar and use a little bit of keto sweetener instead! It truly couldn’t be any easier.

Here are a few low carb side dish recipe ideas to make this a full meal: 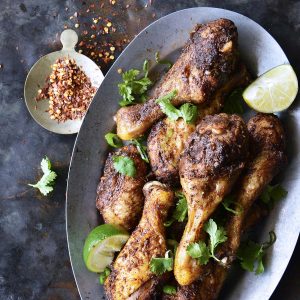 This post was first published on An Edible Mosaic on September 5, 2018. I updated it with more information on June 28, 2021.