This recipe is really versatile, since you can add any kind of dried fruit, nuts, and cereal you like.  This granola is great by itself, with milk, with yogurt, on ice cream, or even on top of your morning oats (it doesn’t get much better than oats on top of oats!).  :) 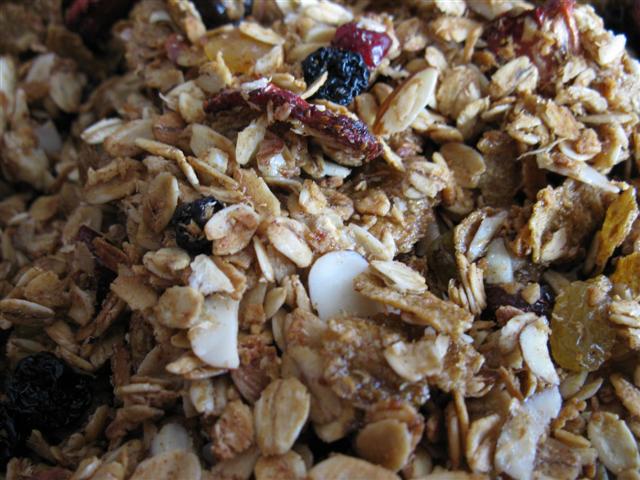 ~1 tsp cinnamon (more or less depending on your taste; you could also use pumpkin pie spice with is a mix of ground cinnamon, cloves, ginger, allspice, and nutmeg)

Preheat oven to 350F.  Melt together the honey, butter, coconut oil, and cinnamon; turn off the heat and add the vanilla.  Mix half the liquid with the rolled oats and coconut, and reserve the other half of the liquid for the cereal, dried fruit, and nuts (mix the reserved liquid with the cereal/fruit/nuts right before baking).  Bake the rolled oats spread out on a baking sheet (or large roasting pan) for 35 minutes or until lightly golden and toasted (remove from the oven and stir the oats every 10 minutes).  Add the cereal mixture during the last 10 minutes of baking.  Allow to cool to room temperature before putting away, and store in an airtight container in a cool dry place (but not the fridge) for up to 3 months.

Welch’s Dried Fruit Berry Medley:  This mix contained golden raisins, which I thought was a little strange…I really like golden raisins but I just don’t think of them as berries!