Baked Schloss Cheese with Melted White Wine Onions is an addictive combination; Schloss is aromatic and rich with a nutty, sweet flavor, the perfect complement to the subtle tang of onions cooked down in butter and white wine. 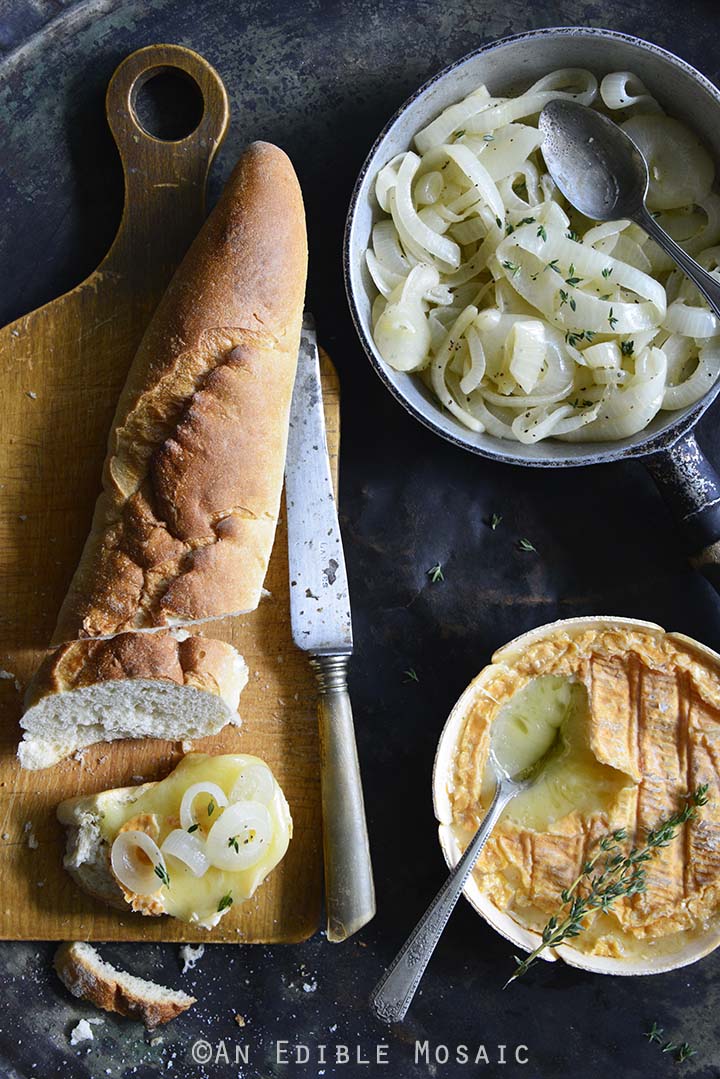 I never actually thought I’d be one of those people. You know the ones I mean; the people who actually believe that when it comes to cheese, the stinkier the better. But somehow, without me even realizing what was happening, I was converted.

I remember my first foray into the world of pungent cheeses. It was with an Époisses de Bourgogne I had in New York City. The cheesemonger really talked it up, calling it the “King of Cheese” and describing it as lusciously creamy with a sweet and salty flavor…of course if you could get past its strong odor. (I’ve heard it’s been banned on public transportation in France!) One bite and I was hooked. 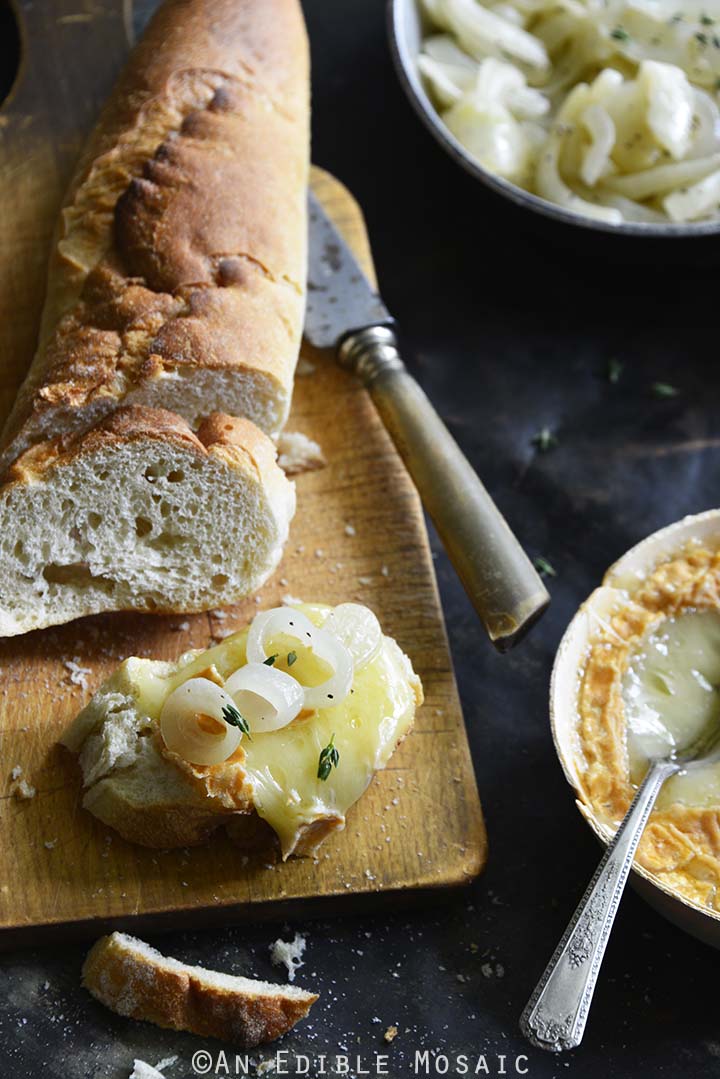 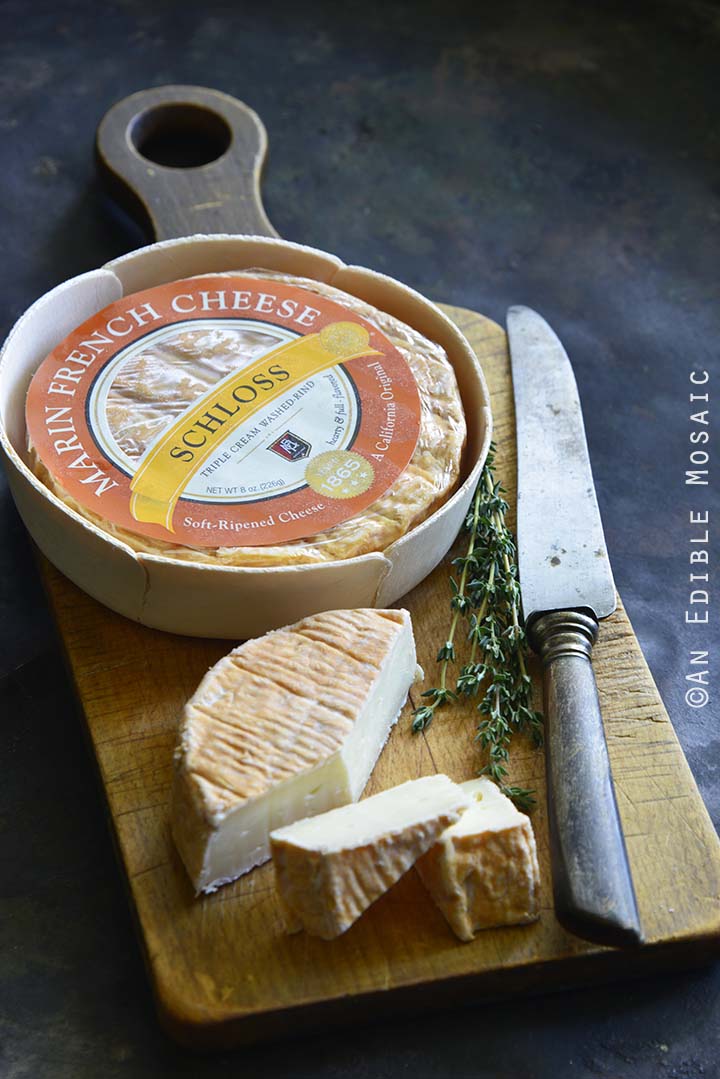 My first Raclette experience in the cellar of a wine and cheese restaurant in Paris was equally unforgettable. Let’s just say that Raclette melted over steamed new potatoes is bliss and the odor (which I’ve heard compared to “stinky feet” and worse) didn’t bother me one bit.

I can always go for a good sharp-smelling blue cheese of any variety, which I mostly attribute to being from Buffalo (the land of chicken wings, which are always served with blue cheese dressing, and if you’re lucky, it’ll even have chunks of blue cheese). I laugh in the face of so-called mushroomy Camembert (which I love paired with sweet apples), and I find that the pungency of Alsatian Munster makes a mighty fine grilled cheese. 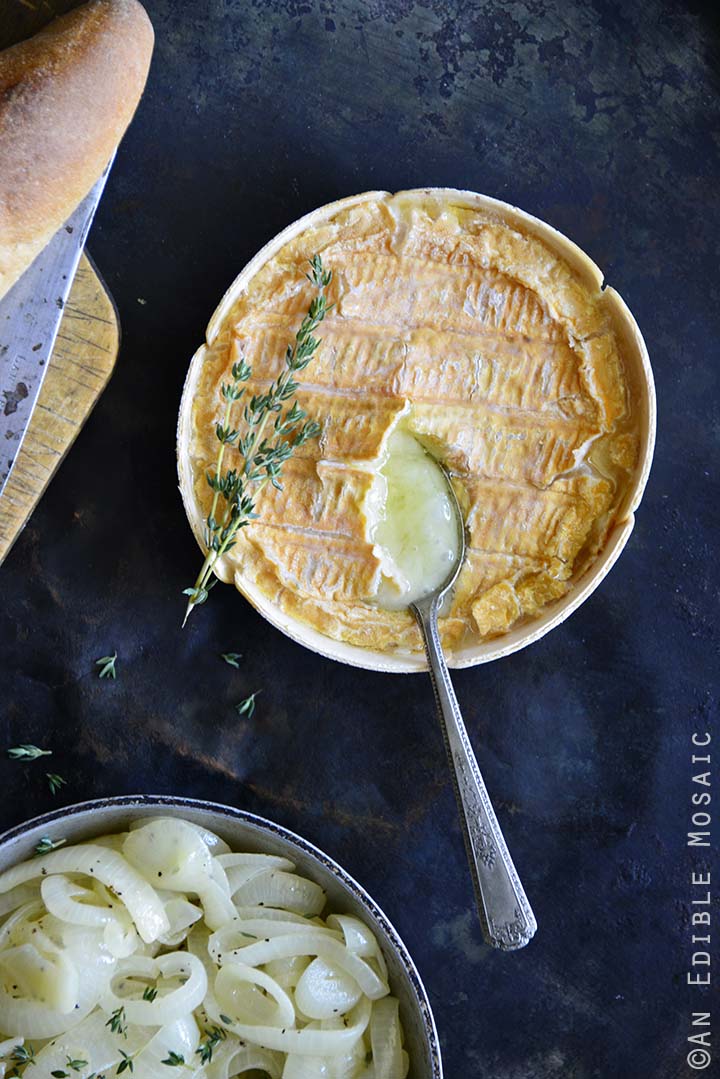 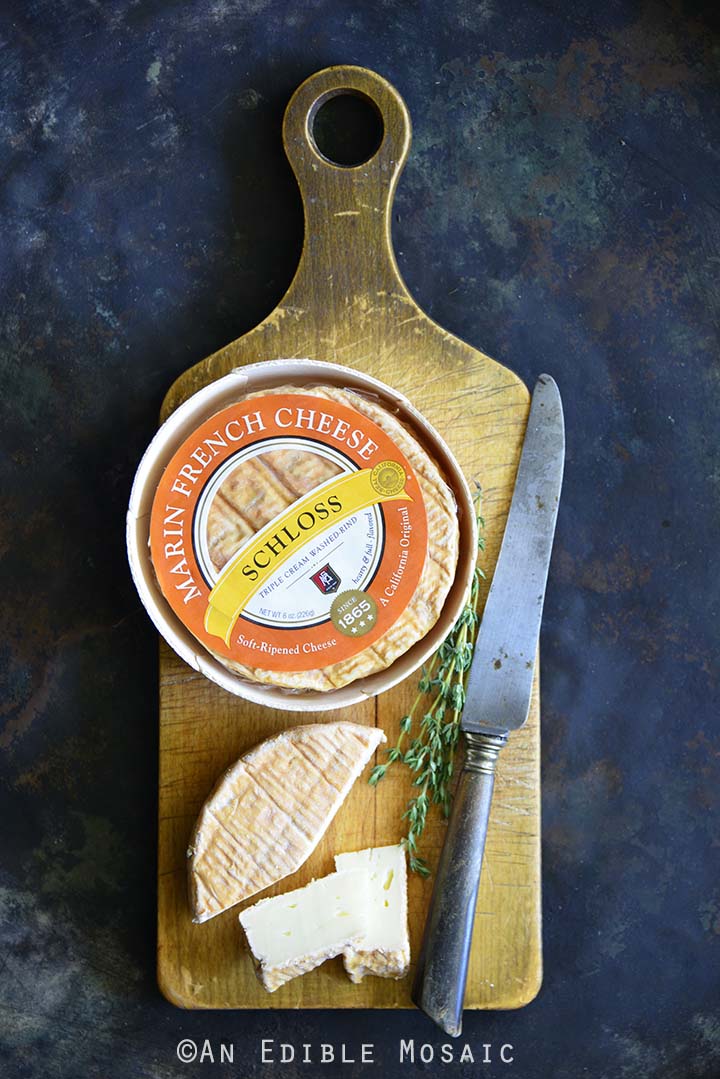 I can’t say I’ve had the pleasure of trying Limburger, but given the opportunity, I certainly would, which is why I was all for trying another cheese with a formidable reputation: Schloss! The rumors were true; this cheese has quite a strong aroma. Past the outer rind, the flavor is delectable; creamy and smooth-textured, with robust flavor notes of toasted nuts and caramel.

Inspired by an Austrian-style washed-rind cheese, Marin French Cheese has been making Schloss since the early 1900’s. There’s a loyal fan base of this cheese, and I now consider myself part of that group; the more complex the cheese, the more I find myself craving it. Marin French recommends pairing it with hearty California red wines, aromatic whites, or dark beer.

I kept the flavors in this recipe simple. The lovely orange-hued round of Schloss is baked until it is gooey and fondue-like inside. Onions are melted down in butter and seasoned simply with salt, black pepper, a little white wine for acidity, and fresh thyme for brightness. Combine the two with crusty baguette and you have a treat that you won’t soon forget. It makes a delicious appetizer for fall entertaining, and it would be a great way to start a holiday meal.

Have you tried a stinky cheese, and if so, which one(s)? 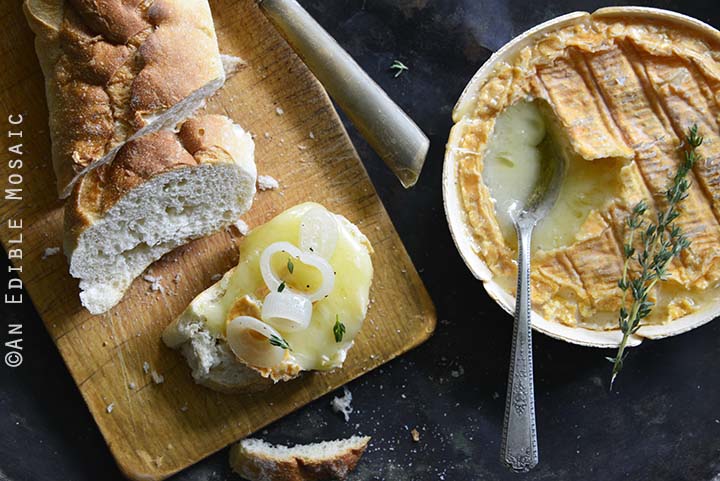 Print
Baked Schloss Cheese with Melted White Wine Onions
Prep time:  5 mins
Cook time:  25 mins
Total time:  30 mins
Yield: 8 servings
Baked Schloss Cheese with Melted White Wine Onions is an addictive combination; Schloss is aromatic and rich with a nutty, sweet flavor, the perfect complement to the subtle tang of onions cooked down in butter and white wine.
Ingredients
Instructions
3.3.3070
Disclosure: I received the Marin French Cheese that I used in this recipe for free, and I also received compensation for this post. I am happy for the opportunity to share brands that I believe in with my readers, and I hope you enjoy my recipe. As always, opinions stated are my own.

#ad If you’re looking for a romantic meal to mak

“My dream concept is that I have a camera and I

This small batch recipe of Red Velvet Cupcakes is