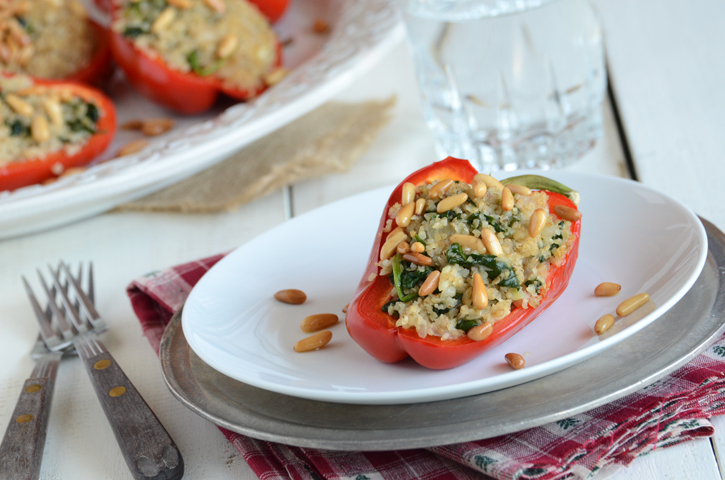 To everyone who took the time to read my last post, comment on it, send me an email, or message me on Facebook – thank you!  I was so nervous about publishing that post, but I can see that it was worth it.  Your kind thoughts, comments, and gestures mean the world to me.  XO, Faith

About a month ago Mike asked me if I secretly became a vegetarian.  I had to laugh because I know what he’s talking about…but no, really I haven’t (I almost wish I could, but sometimes I just crave a good burger, you know?  Or roast chicken…mmm…).  But on a daily (or even weekly) basis, I do seem to be eating less and less meat.  (And that says a lot because I was never a huge meat eater to begin with; I could never just sit down and polish off a steak in one sitting…a couple bites and now we’re talking though.) 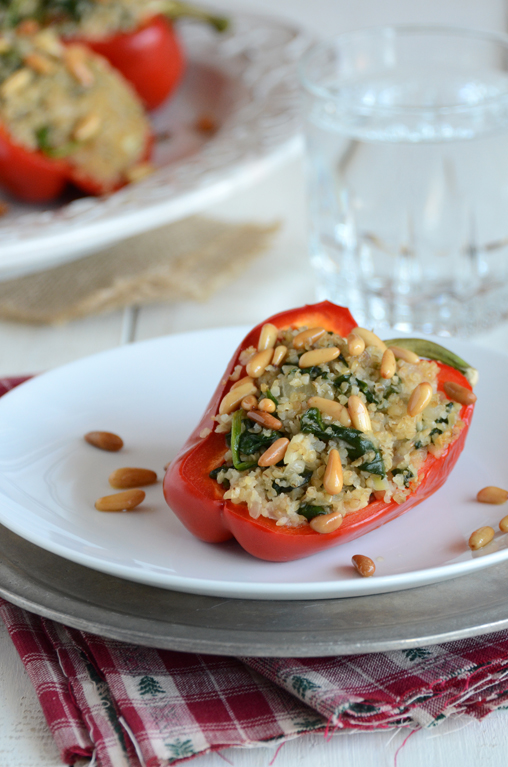 This meal was born one day when I had a pack of red peppers in my fridge to use up, and I wanted to stuff them with something light but hearty at the same time.  Bulgur wheat was the perfect choice, and a few toasted pine nuts on top really make the dish feel special.

And it looks so festive too, doesn’t it?  Just look at the pretty green from the spinach and the gorgeous red peppers.  If I wanted to plan a vegetarian or vegan holiday menu, I think this would be a lovely addition. 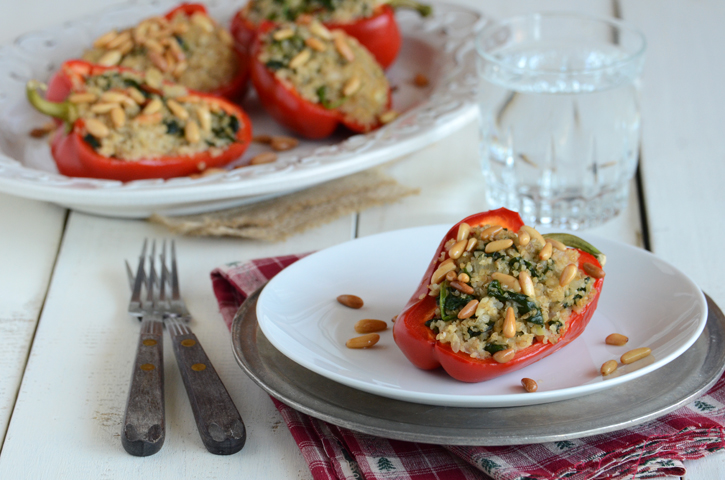 Combine the bulgur, 1/2 teaspoon salt, and boiling water in a medium bowl; cover and let sit until tender, about 20 minutes.  Drain the bulgur in a fine mesh sieve, gently pushing with the back of a wooden spoon to extract as much water as possible; set aside.

Preheat oven to 400F.  Line a large baking sheet with foil or a silpat liner; arrange the peppers (cut side up) on the baking sheet.  Set aside for now.

Heat 2 tablespoons of oil in a large skillet over medium-high heat; add the onion and cook until softened and starting to brown, about 5 to 7 minutes.  Add the garlic and cook 1 minute, then stir in the spinach and 1 tablespoon of water and cook (covered) until wilted, about 3 to 5 minutes.  Turn off the heat and stir in the black pepper and the remaining 1/2 teaspoon salt.

Stir together the bulgur and spinach mixture and stuff it into the peppers.  Pour 4 tablespoons of water into the bottom of the pan; cover with foil and bake until the peppers are tender, about 45 minutes.

Add the remaining 1 tablespoon of oil to a small skillet over medium heat. Add the pine nuts and cook until golden brown, about 1 to 2 minutes, stirring constantly. Sprinkle the toasted nuts on top of the stuffed peppers and serve.