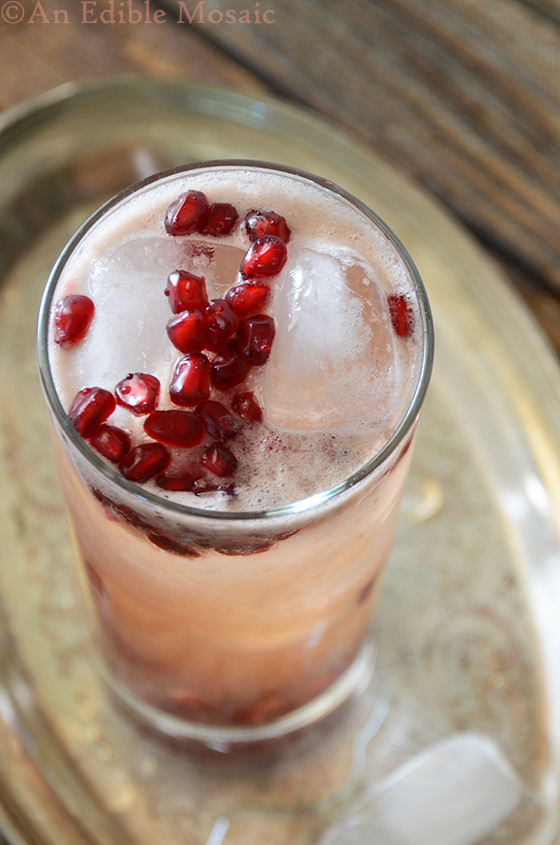 And if you’re a Game of Thrones fan, I’m sure you’re just as through-the-roof thrilled as I am for Sunday night.

(If you’re not a fan, you might not find this post all that interesting, so I won’t take it personally if you just want to scroll down to the bottom and check out the fabulously delicious recipe that you definitely don’t have to be a Game of Thrones fan to enjoy. Or stay a while and read a little bit about the story; but I warn you, you will be intrigued if you do!)

And now for a few disclaimers:

1) This post is NOT sponsored; I just love Game of Thrones.

2) This post contains spoilers if you haven’t been watching the show or reading the books.

3) I haven’t read the books yet (I’m planning to do so after the series ends, and yup, I know that’s backwards), so I honestly don’t know what happens this season.

4) I wrote this post; however, as I am not a writer for the show, please do not send me hatemail if some of the details are amiss.

I was so excited, I wanted to make something food-related to commemorate the beginning of the fourth season. You know, hopefully when Daenerys comes back to kick everyone’s butt and take back her throne. But before I get to the food… 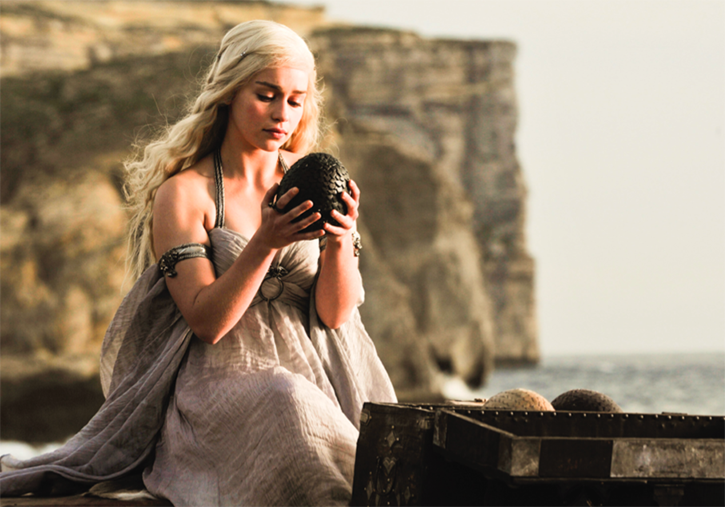 For those of you wondering what Game of Thrones is all about, here’s a brief synopsis:

Based on the fantasy novel series called A Song of Ice and Fire by George R. R. Martin, the story unfolds through the points of view of several characters who belong to different noble families vying for the iron throne.

When the series starts, Robert Barathean is king. Facing some problems in King’s Landing (the capitol), Barathean heads north to Winterfell to enlist the help of his trusted friend Eddard Stark, Lord of Winterfell, as the hand of the king. Stark begrudgingly agrees to go to King’s Landing and takes his two daughters, Sansa and Arya, with him. Long story short, King Robert is murdered and his treacherous teenage son Joffrey (who really isn’t really Robert’s son at all) takes the throne. Stark, who was basically the only man in King’s Landing with any honor, was condemned as a traitor and sentenced to death.

Stark dies and all hell breaks loose; his older daughter (Sansa), who was betrothed to Joffrey, is now a prisoner to Joffrey and his villainous mother, Cersei Lannister. Stark’s younger daughter (Arya) heads on the run. Stark’s oldest son Robb starts what amounts to a civil war by claiming the title “The King of the North” and amassing an army. Robb dies a pretty tragic death along with his mother, his wife, his unborn child, and his men…and not at all in a way you’d expect.

While King Joffrey is having his reign of terror, there are other twists in the plot going on. Both of Joffrey’s uncles, his dwarf-uncle Tyrion Lannister and his “uncle” Jaime Lannister, have their own adventures and are both held captive by members of the Stark family at some point.

The ex-king Robert’s brothers both vie for the throne at some point too. The younger brother is sadly killed, and the older brother gets mixed up in some seriously creepy dark magic with the Red Woman. Oh, and there’s an illegitimate son of Robert’s who is murdered pretty gruesomely along the way.

And I can’t forget about the breathtakingly gorgeous silver/blonde-haired Daenerys Targaryen, the Mother of Dragons. Her father (King Aerys II Targaryen, also known as the Mad King) sat on the iron throne before King Robert Barathean took it from him. At the start of the show, Daenerys and her older brother Viserys are exiled and living across the Narrow Sea. Viserys, in his relentless quest to retake the throne, marries Daenerys to Khal Drogo, the warlord and leader of the nomadic horse-riding Dothraki tribe. They partake in some pretty grotesque rituals, like the pregnancy ritual that Daenerys has to take part in: eating the raw heart of a stallion in front of the tribe.

Daenerys changes before our eyes though, from a timid, abused young girl into a confident leader. She learns the Khal’s native tongue and truly becomes a Khaleesi (queen). Then in a sad twist of fate, Daenerys’ baby Rhaego is stillborn and her husband the Khal dies; then to torture Daenerys even more, the Khal is brought back using bloodmagic. He’s reduced to a hollow shell though, just a dark shadow of a person; basically, a live body with no soul. Daenerys does what she has to do and moves on. (And I should mention, her brother Viserys isn’t part of the story for long; his end is not a happy one, which is actually happy for everyone but him.)

So, Daenerys is left widowed and childless, and seemingly with nothing (except of course, the loyalty of the exiled knight who’s remained at her side, Ser Jorah Mormont). She still has one of her wedding gifts though: three fossilized dragon eggs. She takes it on herself to exact revenge from the magic woman, Mirri Maz Duur, who betrayed her trust and took both her son and her husband from her. To that end, Daenerys builds a pyre to burn Mirri alive on, and then climbs into the fire herself with her three dragon eggs.

The scene that takes place the next morning is one of my favorites in the whole show: Daenerys climbs out of the ash, her skin blackened with soot and her clothes burned off her, unharmed, with her three baby dragons. She shows then that she truly is the Mother of Dragons and the rightful heir to the iron throne. After that she gets herself an army and is now gearing up to reclaim the throne.

And I have to mention Jon Snow. He’s Eddard Stark’s illegitimate son who went into service as a Night’s Watchman on the Wall. North of the Wall is where some seriously strange things happen with the zombie-like White Walkers.

So, that’s the story thus far in a nutshell. I’ve omitted so many details and twists and turns in the plot, but believe me when I tell you, the show is captivating. I mean, over 13 million viewers per episode and famous fans like President Barack Obama can’t all be wrong, right? (Stats are from The Guardian.) Just a heads-up though, the show – in true HBO-style – isn’t for children.

When I was thinking about what to make to commemorate the show, I knew I wanted the dish to revolve around Daenerys. She proves herself over and over again as the true queen. Plus, she’s kind-hearted (which is true of so few people on the show), smart, drop-dead gorgeous, and the Mother of Dragons…she sounds pretty fabulous all around, right? 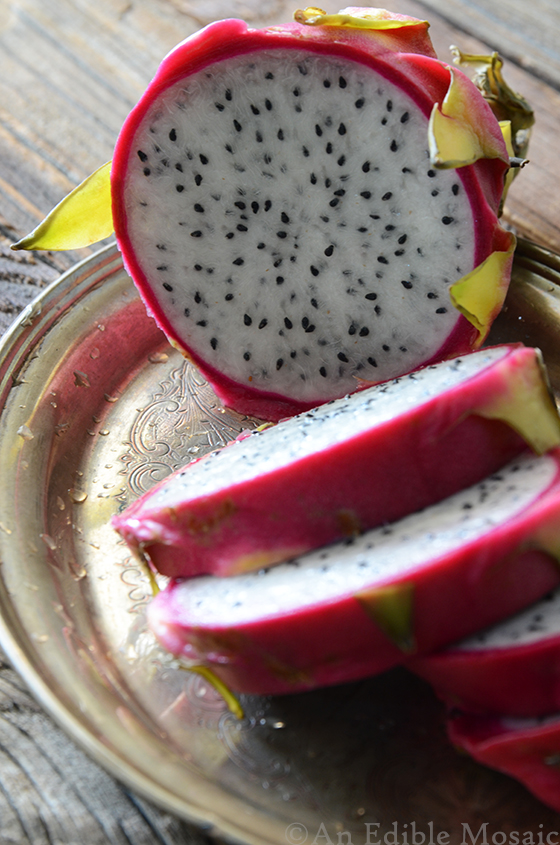 So what kind of food to make for Daenerys? I tried dragon fruit for the first time not too long ago and I loved it. Dragon fruit is the perfect choice, of course firstly because Daenerys is the Mother of Dragons, but also because dragon fruit looks like one of her beloved dragon eggs. Also, the white-fleshed dragon fruit is sort-of silvery, and reminiscent of Daenerys’ hair color (at least to me). And lastly – for a bit of symbolism, so bear with me while I go all 10th grade English class for a minute – dragon fruit is an adaptable and understated, yet elegant fruit. It’s sweet with subtle flavor nuances of melon and pear, with texture of a kiwi because of the seeds. But one look at this fruit and you can see that it is beautiful inside and out, just beckoning to be eaten. The same with Daenerys; she’s adaptable, beautiful inside and out, and just waiting to fulfill her destiny as queen. 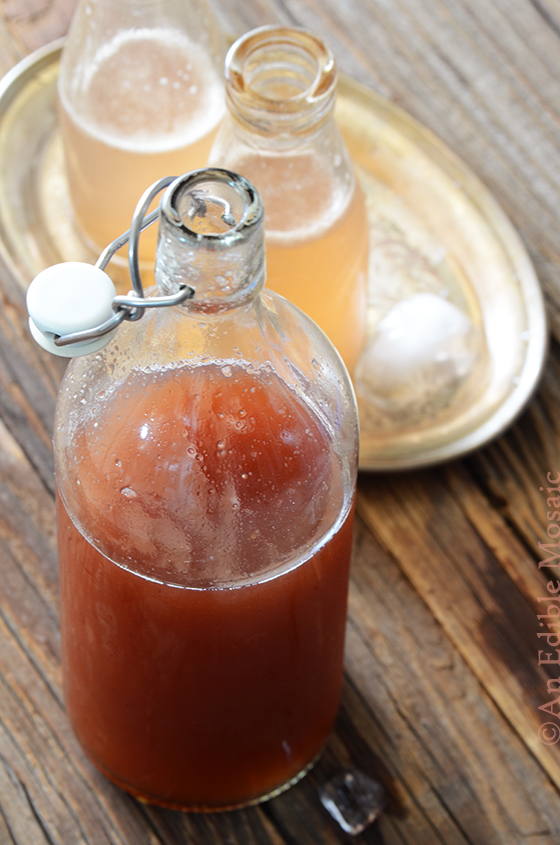 Then I somehow decided I wanted to make a dragon fruit shrub. What’s a shrub, you ask? Well, from back in the day (American colonial era), a shrub (also known as “drinking vinegar”) is a sweet fruity syrup that’s preserved with vinegar and mixed with water for a refreshingly sweet/tart drink.

After reading about the cold-brew method for making shrubs on Serious Eats, I immediately knew that was the way I wanted to go. (I’m a big fan of the cold-brew method for iced coffee and iced tea, so why should a fruity vinegar syrup be any different, really?) In this method, basically, the fruit is left to macerate in the fridge to develop its flavor instead of being heated. The process is a bit more time-consuming, but it completely takes care of itself. And the end result – a sweet/tangy syrup that’s infused with complex notes of fruit – is so worth it. 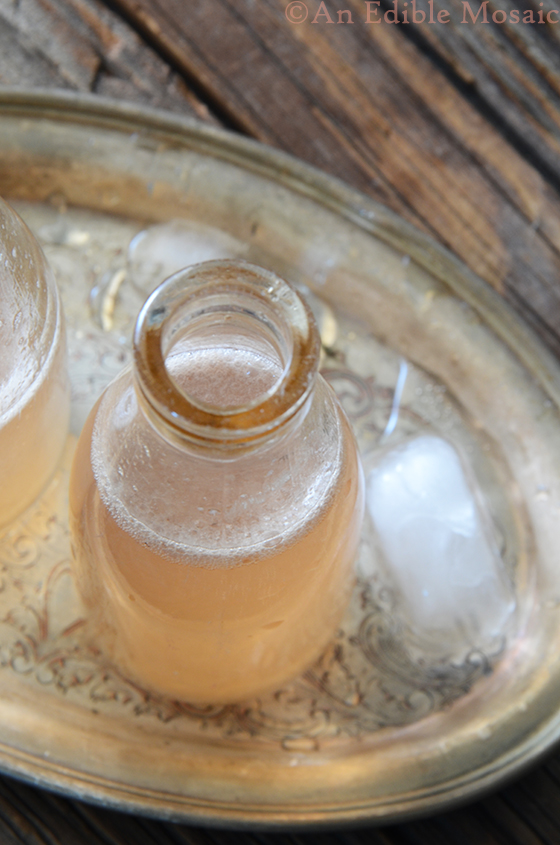 I went with dragon fruit as my main fruit in this recipe, but the beauty of shrubs is that you can really use any fruit (or combination of fruit) that you like. I also used strawberry and pear; pear for the flavor (to echo the slight pear notes in dragon fruit) and strawberry for both the flavor and pretty pink color. It’s a great combo and I highly recommend it.

My favorite way to enjoy it is over ice, with carbonated water, with a sprinkling of fresh pomegranate arils. Sweet fruity flavor hits you first, and then the drink finishes with a vinegary tang, which makes it so refreshing. I love it, but I admit it’s not a drink for everyone; I think you have to be a little hardcore to enjoy it, lol (yeah, it’s fruity, but in the end you’re still drinking vinegar!). If you enjoy the sweet/tart flavor combo, I recommend giving this a try. I definitely think Daenerys would approve. ;)

One last thing…if you are wondering how to pronounce Daenerys Targaryen, here it is (from this site): Duh-NAIR-iss Tar-GAIR-ee-in. 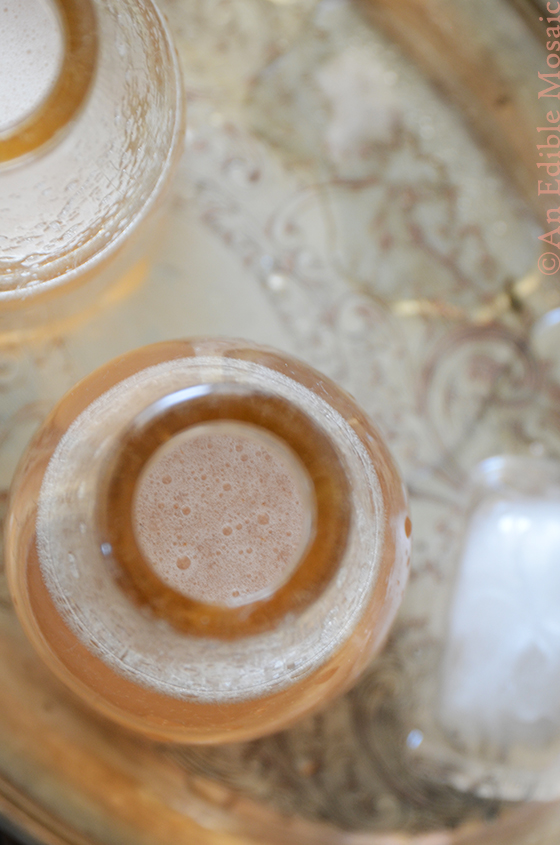