This classic Hot Toddy recipe combines whiskey, fresh lemon juice, honey, and a subtle hint of cinnamon for a cozy hot cocktail that’s perfect for warming up with.

Like a little black dress or a great pair of jeans, a classic cocktail never goes out of style.

The Hot Toddy is a classic cocktail.

It has a colorfully disputed, but very interesting origin. And it’s been touted as a cure-all for the common cold or flu.

But the really great thing about the Hot Toddy is that it’s easy to make, delicious, and cozy!

Even though your guess is as good as mine when it comes to determining whether a Hot Toddy is effective in combating a cold or flu, one thing is for certain: it’s a delicious and cozy drink! And it has minimal ingredients.

What’s in a Hot Toddy?

Throughout history, the components of this beverage have changed to suit the location and the era.

These days, a Hot Toddy is typically made with:

Is a Hot Toddy Made with Tea?

Traditionally, this drink is made with hot water, not tea.

However, adding an herbal tea, such as chamomile, adds more flavor and also makes it an even more relaxing hot beverage to cozy up with.

Making this drink really is as easy as boiling water! I like to use an electric kettle to boil water. You can also use a regular tea kettle on the stovetop, or a saucepan on the stovetop.

To make this cozy beverage, simply heat water and pour it into a glass pitcher.

Pour in the whiskey.

And then add the honey and give it a stir.

I like to serve it with a cinnamon stick, star anise, or clove in each glass. I think it really bumps up the cozy factor of this already cozy drink!

Where Did the Hot Toddy Originally Come From?

There are several stories describing the origin of this warming beverage.

One explanation is that Scotch whiskey and a splash of hot water was mixed up in a pub in Edinburgh, Scotland to help take the chill off. This was quite a common drink there in the mid-1800s! Supposedly the water came from nearby “Tod’s Well”, and thus earned the drink its name.

Others say that the Hot Toddy came from British-occupied India where in the early 1600s a “taddy” in Hindi referred to a drink made with fermented palm sap. By the middle of the 1700s century, a “taddy” in India referred to a beverage made with liquor, water, sugar, and spices.

It’s also claimed that an Irish doctor, Robert Bentley Todd, prescribed his patients a mixture of hot brandy, sugar, water, and cinnamon for the common cold.

And then when this drink reached the American colonies, Caribbean rum and local brandy were prevalent and soon became used to make their own version of the Hot Toddy.

You can read more about the history of the Hot Toddy on Arcadia Publishing, Vinepair, and Make Me a Cocktail.

We’ve all heard that chicken soup and hot tea are good for a cold and flu, right? The Hot Toddy falls under a similar category.

Honey soothes the throat and fresh lemon provides a boost of vitamin C.

Additionally, it’s a hot cocktail, so it will likely help you warm up.

And let’s not forget that alcohol is a depressant, so it’s claimed that this drink may help you sleep better.

But in terms of actual healing powers, who knows?! Try it for yourself and see.

Read more about Hot Toddies and their effectiveness in helping treat the common cold and flu on Medical News Today and USA Today.

What Whiskey is Best for a Hot Toddy?

There’s a saying that says “the best whiskey is the one you have on hand” and that really is the case with this drink! Scotch works well here, and so does Rye whiskey, Canadian whiskey, and bourbon.

Can I Use Liquor Other Than Whiskey for a Hot Toddy?

Yes! Whiskey, brandy, bourbon, or rum all work well in a Hot Toddy. 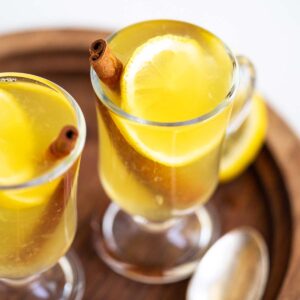