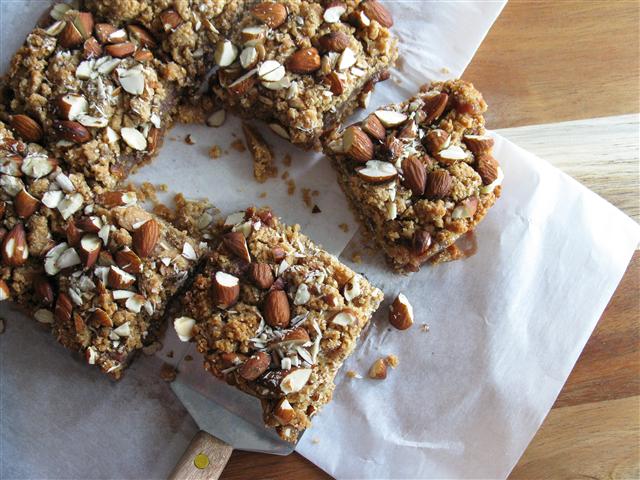 There’s a cute little co-op in my area that makes the best jam thumbprint cookies around.  The only problem is that the co-op is over half an hour away from where I live and I’m not willing to drive that far every time I want a good jam thumbprint.  You can probably see where this is going, lol.  I decided to try and replicate them at home (try being the operative word here). 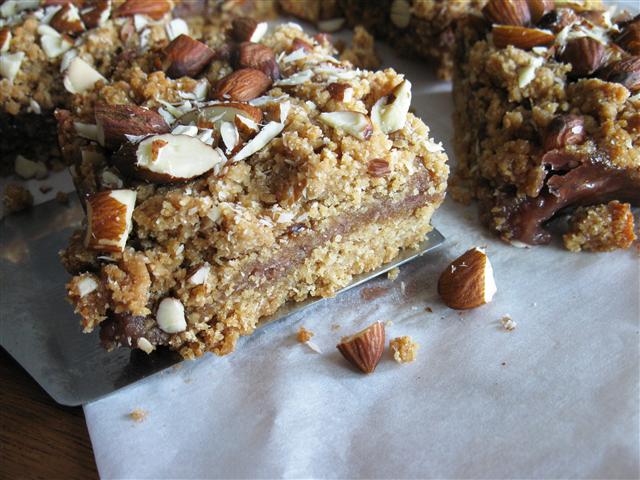 The cookies that the co-op makes are called “Vegan Mixed Berry Almond Thumbprints” and their ingredient list reads as follows:  almonds, spelt flour,  brown rice syrup, canola oil, mixed berries, salt, cinnamon.  From there I came up with my version of the recipe, making a few adaptations to accommodate what was in my pantry (for example, I didn’t have spelt flour or brown rice syrup so I used other ingredients to replace them).

I made the dough, rolled it into balls, and so far so good.  Then I tried pressing my thumb in the center of the balls to create the indentation for the jelly, and the cookies literally just crumbled to smithereens.  After a few attempts I realized that there was just no way these cookies were going to hold their jam…so knew I had to improvise, and bar cookies were the obvious choice.

It’s like lemons and lemonade:  when life gives you crumbs, make crumble topping.  And that’s how these bar cookies were born.  They were so delicious this is a mistake I will happily make again.  Next time I think I want to try them with cherry jam. 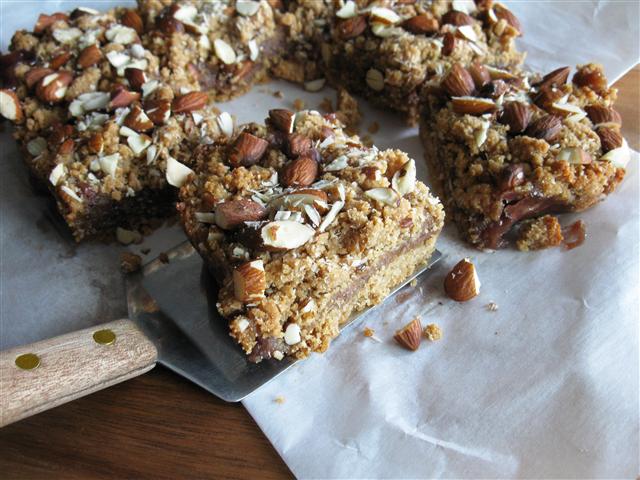 Preheat oven to 350F; line an 8- by 8-inch baking pan with parchment paper, allowing the paper to drape over the edges of the pan.  In a food processor, process the oats until they form a fine powder; pulse in the almond meal, coconut flour, salt, cinnamon, vanilla powder, and baking soda until combined.  In a medium bowl, whisk together the honey and oil; mix the dry ingredients into the wet.

A Note on the Oats:  Oats are gluten-free, but if you have gluten sensitivities, you should be sure to purchase oats that are free from possible contamination while processing (such as Bob’s Red Mill Gluten-Free Oats).

A Note on the Honey:  This recipe is easy to make vegan — just use a vegan liquid sweetener (such as maple syrup, brown rice syrup, or agave) instead of the honey.