These Butterbeer Brown Butter Blondies with Toasted Pecans feature the rich buttery brown sugar sweetness of butterbeer (think butterscotch vanilla!). And like any good blondie, they’re gooey-centered and completely indulgent. What could be a more perfect fall snack for curling up on the couch and reading or watching Harry Potter?

I always wonder what gets a person excited.

And I don’t mean regular excited, I mean the kind of excitement that’s palpable. The kind of excited that makes someone’s eyes light up with passion and their voice resonate with happiness.

For some of us, it’s our work. For others, it might be a hobby. Many of us find that true happiness lies within helping others or just spending time with loved ones no matter what you’re doing. Or maybe it’s a combination of all of these.

I’m easy to please in this regard. One of the things that gets me excited to the point of gleeful is spending a chilly fall evening at home watching fall-ish movies and snacking on crisp, sweet fresh apples and homemade roasted pumpkin seeds. I don’t know about you, but I definitely have certain movies that I’ll only watch at certain times of the year. Like Harry Potter, which just says autumn to me.

And what could be more appropriate than butterbeer when you’re in the mood for a Harry Potter marathon? (And don’t forget to make Polyjuice Potion and Butterbeer Popcorn too!)

With a decadent buttery brown sugar vanilla flavor, Butterbeer Brown Butter Blondies are sure to be a new favorite of muggles and magical folk! If you aren’t familiar with butterbeer, to me it tastes like butterscotch vanilla.

Having lived in the Central Florida area for the past few years, I’ve had the chance to visit Universal Studios several times. Not surprisingly, The Wizarding World of Harry Potter™ (lovingly called Harry Potter World) is my favorite part!

I took this photo of Hogwarts castle at Universal’s Islands of Adventure in Orlando, Florida. It was a dark and stormy day to begin with, and I had a ton of fun enhancing the look by making it even more moody and ominous!

Hogsmeade and the Hogwarts castle are located in Universal’s Islands of Adventure. And of course just a short train ride away on the Hogwarts Express you’ll find Diagon Alley at Universal Studios Florida.

I absolutely love the charm that they captured in Hogsmeade Village. The attention to detail that went into it is incredible.

You can find Hermione’s Yule Ball dress on display in a window, as well as mandrake plants, and an Howler (a magical letter that yells at the recipient).

Hogsmeade Village is the best place to grab a butterbeer!

A few of the restaurants and stores there include The Three Broomsticks (anyone fancy a butterbeer?), Ollivanders (the wand chooses the wizard, right?), and Honeydukes (which has all manner of treats straight out of the Harry Potter books!).

The Three Broomsticks really sets a mood, doesn’t it?

Honeydukes has a wall of Bertie Bott’s Every Flavoured Beans!

And while you’re at Honeydukes, don’t forget to pick up a Chocolate Frog! They come complete with their own Wizard Trading Card.

And of course, this is where you’ll find the Hogwarts castle, which is worth a trip to Harry Potter World in and of itself!

If rides are your thing, you can find Harry Potter and the Forbidden Journey is located in Hogwarts castle. In Hogsmeade you’ll also find Hagrid’s Magical Creatures Motorbike Adventure and Flight of the Hippogriff.

Don’t be scared of a long line for attractions because there’s so much to see as you wait! When you’re in line for the Forbidden Journey attraction, you get to walk through Hogwarts castle.

Statues inside the castle are larger than life!

You’re going to love the talking pictures inside the castle! They’re having an actual conversation.

You will get to see Hagrid’s Hut in line for the Hagrid’s Magical Creatures Motorbike Adventure attraction.

And if you can believe it, Diagon Alley has even more character than Hogsmeade.

You walk into Diagon Alley as though you’re entering through the magical brick wall that Harry and Hagrid entered through. And then you’ll feel like you literally just stepped onto the set of Harry Potter!

Looking straight down the alley you’ll find charming shops on both sides and Gringotts bank at the end, which is where you’ll find the ride Harry Potter and the Escape from Gringotts. On top of the bank is a Ukrainian Ironbelly dragon on top that breathes fire every 10 minutes.

The dragon puts on its fiery show every 10 minutes.

There’s plenty of shopping to do in Diagon Alley! Even if you’re not in the market to buy a souvenir, it’s a fun place to window shop. A few of the shops include Ollivanders (just in case you didn’t pick up your wand in Hogsmeade Village), Weasleys’ Wizard Wheezes, Sugarplum’s Sweetshop, and Wiseacre’s Wizarding Equipment. Don’t forget to look for the infamous Borgin and Burkes, which is located in Knockturn Alley.

And to satisfy your hunger, you can grab a meal at The Leaky Cauldron and a sweet treat at Florean Fortescue’s Ice-Cream Parlour. 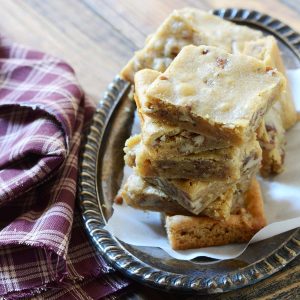