Cinnamon Apple Blondies combine sweet cinnamon apples with toasted nutty brown butter for a decadent cookie bar that has the gooey texture of a classic blondie. It’s easy to make and the perfect fall treat!

For those times you want pie, but have neither the time nor the patience to make pie, I give you these blondies. Because apparently, as of late blondies (the dessert, lol!) have become my thing.

It started back in October when my Salted Peanut Butter and Chocolate Snickers Brown Butter Blondies saved the day (or at least the moment!). They helped use up leftover Halloween candy.

The trend continued with my Flourless Pecan Pie Cashew Butter Blondies (which are soooo gooey and delicious!).

And now these Cinnamon Apple Bondies.

Truthfully, I’ve been sitting on this recipe for going on two months now. However, I couldn’t share this recipe right after I shared the Snickers blondies, right? Lest you all catch on quick to the fact that apparently I am blondie-obsessed. (But I promise I’m not, lol. This batch went to a good friend who polished them off in a single day!)

If you want an easy fall dessert that you can whip up on a whim that everyone will love, this Cinnamon Apple Blondies recipe is it!

The really great thing and perhaps what I love most about blondies (other than their amazingly gooey texture) is the fact that once you come up with the perfect base recipe, you can change up the flavor seasonally or to suit your preference.

I had two lonely little apples in my fridge, and of course that’s not enough to make a pie. But it’s the perfect amount to whip up these apple bars.

This festive fallish apple treat might make you think twice before you take an entire afternoon to make an apple pie!

How to Make Apple Blondies

How to Store Apple Blondies

Store Apple Cinnamon Blondies in an airtight container at room temperature for up to 2 days. After that if there are any left, move them to the fridge for up to 3 days more. 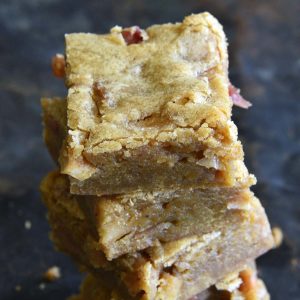 For the Apple Mix:

For the Brown Butter Blondies:

This post was first published on An Edible Mosaic on December 4, 2017. I updated it with more information on September 17, 2021.