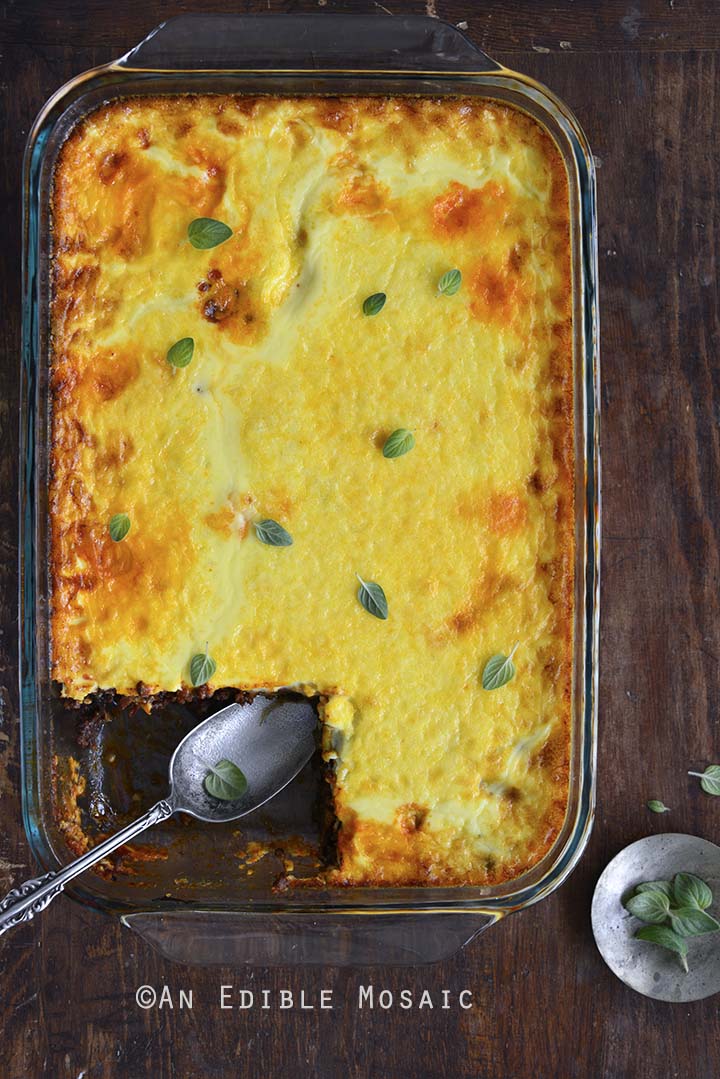 Greece has been on my bucket list of travel destinations for forever now. When I think of Greece, I think of ancient ruins. The brilliant blue of the Aegean Sea, contrasted by the pristine white houses. And the food, of course the food.

My knowledge of Greek food is limited to my experiences at Greek diners and homemade meals at my Greek friend’s house in high school, which were actually quite a bit more authentic than my diner experiences. One of my favorites that my mom’s friend would make was always Moussaka.

I have literally made this dish twice in the past month (which is unheard of for me, especially because it makes a big batch so I’ve been eating it a lot!), so that should tell you how much I love it. It’s one of those dishes that is so much more than the sum of its parts; everything comes together for a perfect marriage of flavors. 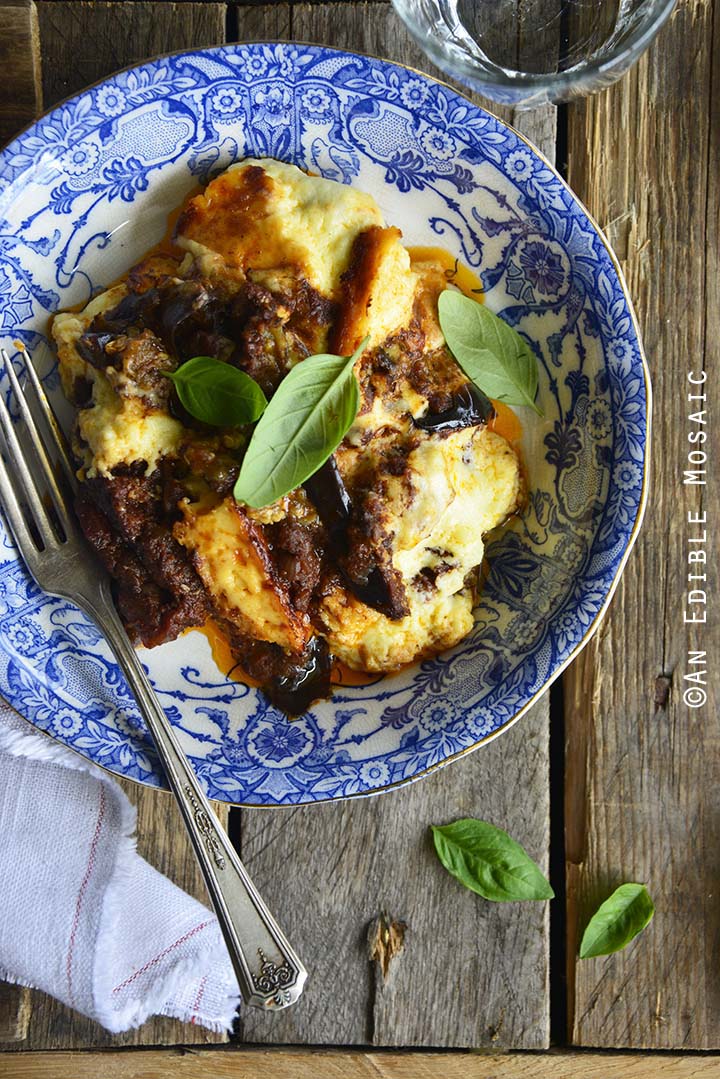 What is the Difference Between Lasagna and Moussaka?

Moussaka is widely accepted as a Greek dish; however, I’ve heard different things from different people regarding the origin of lasagna, some saying it’s from Italy, others saying ancient Greece. Both moussaka and lasagna are layered casseroles, but lasagna is layers of pasta and moussaka is typically layers of eggplant or potato. Also, moussaka usually includes warm spices, such as cinnamon and allspice.

Additionally, the topping is different for moussaka and lasagna. Moussaka is made with some kind of white sauce (such as béchamel or mornay), while lasagna frequently is topped with a mixture of mozzarella, ricotta, and/or Parmesan cheeses. They are both delicious in their own right, but when you want to keep your carbs lower, moussaka is a good route to take. 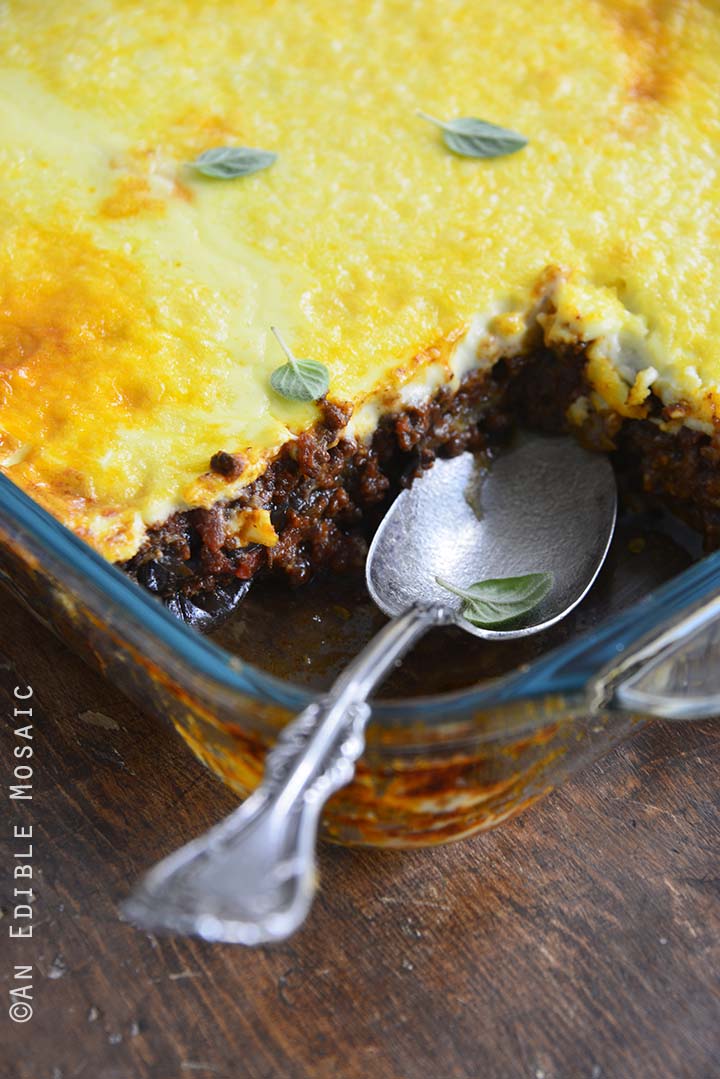 There are quite a few variations of this dish; some include potato, some have eggplant. Most recipes call for a cinnamon, black pepper, allspice-scented tomato-based meat sauce (frequently lamb, but sometimes beef). Quite a few versions feature a thick béchamel or mornay on top. Today I’m sharing my absolute favorite way to make moussaka.

Eggplant, Potato, and Other Vegetables in Moussaka

I like to use all eggplant instead of a mix of eggplant and potato, or other veggies (like zucchini) because it’s such a great compliment to the other flavors.

Pro Tip: Whatever vegetable you use, make sure to cook it first! Otherwise, it will add to much water to the casserole.

For my meat sauce, I use beef because I’ve never been a big fan of lamb (by all means, use lamb if that’s your preference though). I make a super easy sauce from scratch that literally only requires a little patience, but no specialized skill. I use a few classic spices, as well as a somewhat surprising herb mix (see below for more info), and I deglaze the pan with a fruity, full-bodied red wine, which adds another level of complexity to the dish.

The key to the complex flavor of this sauce lies in the fact that it needs to cook for a while (at least 2 hours), so the flavors can develop and the sauce can thicken. Give yourself enough time so you don’t rush this step.

Pro Tip: You can make the meat sauce 2 to 3 days ahead of time and keep it in the fridge until you make the casserole. 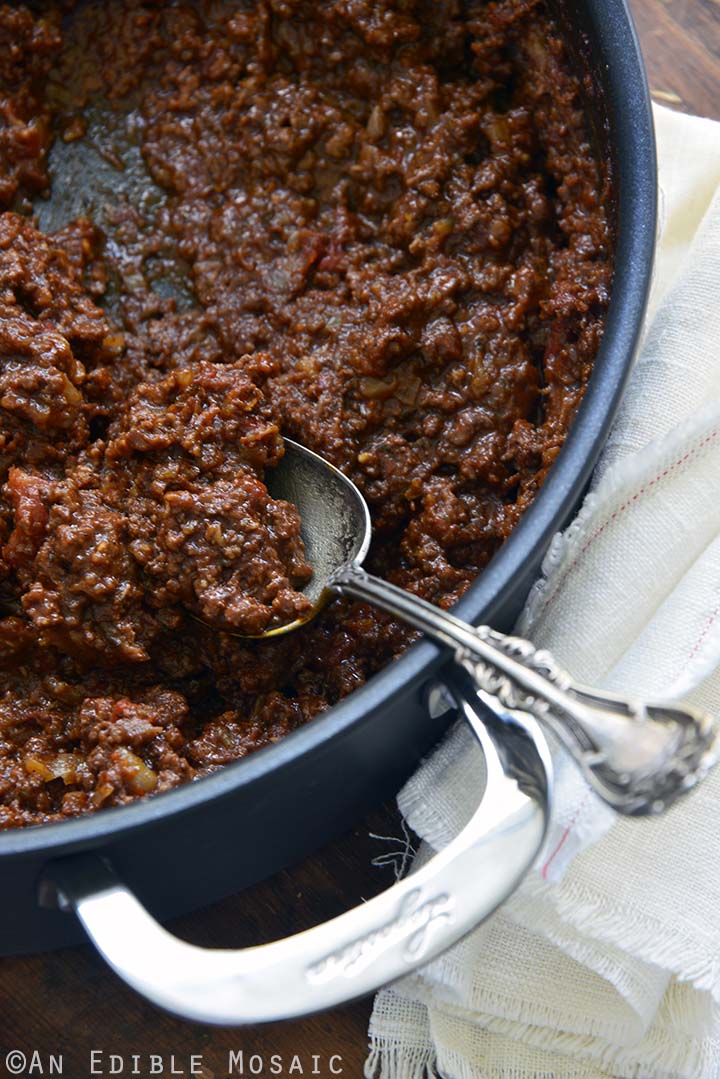 You’ll need to cook the meat sauce until it’s thick like this.

Of course I go with cinnamon, black pepper, and allspice, but what really takes my meat sauce to the next level is Herbes de Provence. This is a blend that (according to Wikipedia) typically contains savory, marjoram, rosemary, thyme, oregano, and sometimes lavender.

In the past I used to use just rosemary, thyme, and oregano to make Moussaka. However, one day when I found myself out of both fresh and dried, I found my little jar of Herbes de Provence. I realized that it has the three herbs I normally would use, and I thought why not give it a try. I haven’t looked back since!

Béchamel sauce is one of the French mother sauces; it is milk thickened with a butter/flour mixture. If you add shredded cheese, it becomes mornay sauce. If you add egg and/or egg yolk, the sauce becomes more like a savory custard. Most commonly, I’ve seen béchamel sauce with egg yolk used as a topping for moussaka. To keep the carbs down, to top my moussaka I like to use more of a cheesy savory custard so there’s no need for all-purpose flour. 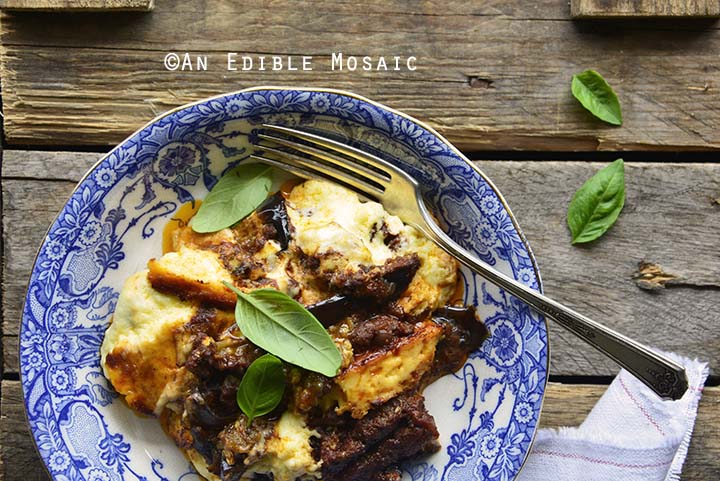 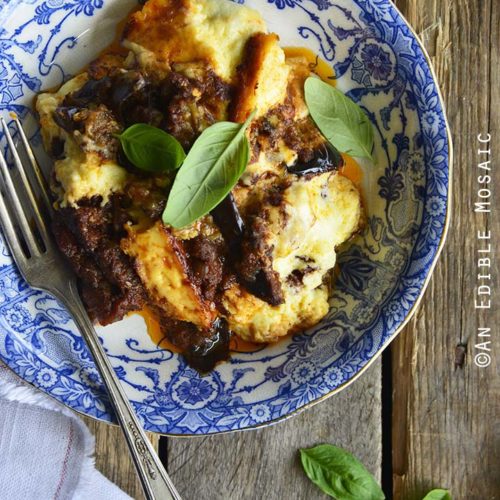 For the Meat Sauce:

For the Eggplant (make this while the meat sauce is cooking):

For the White Cheese Custard Sauce (make this toward the end while the meat sauce is cooking):

To Assemble and Cook the Casserole: 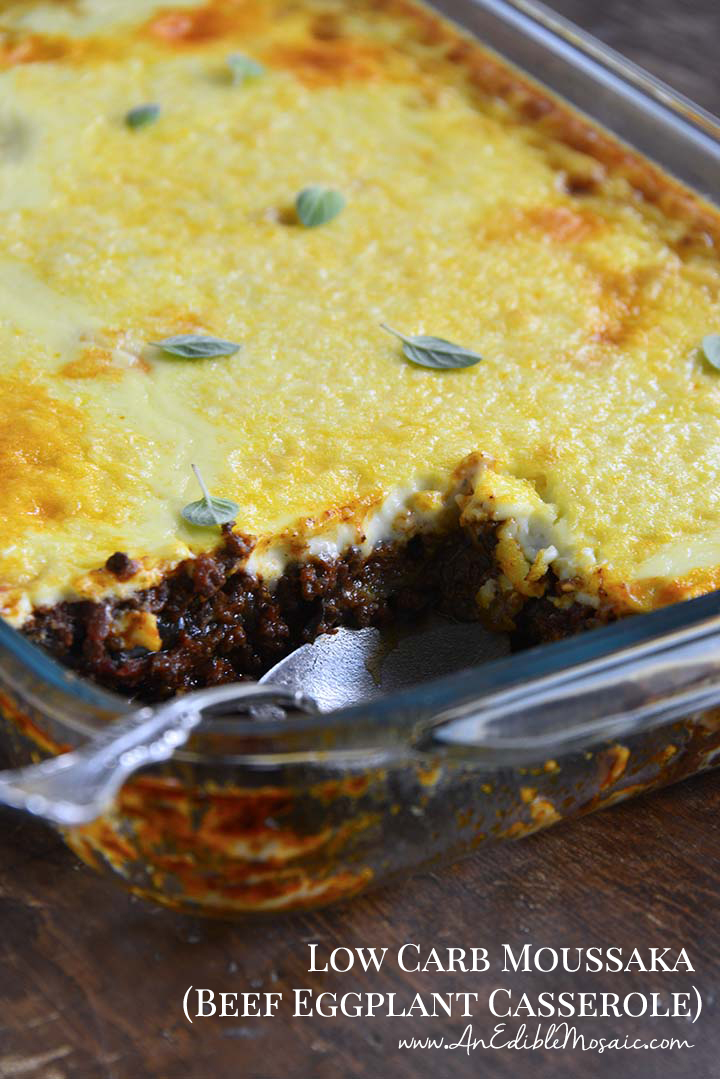