Paleo Sumac-Spiced Baked Eggs with Kale are just different enough to be more interesting than your average egg dish, but not so off-the-wall that they’re not a crowd-pleaser. Sumac adds a pleasantly tangy flavor that nicely compliments the earthy kale. 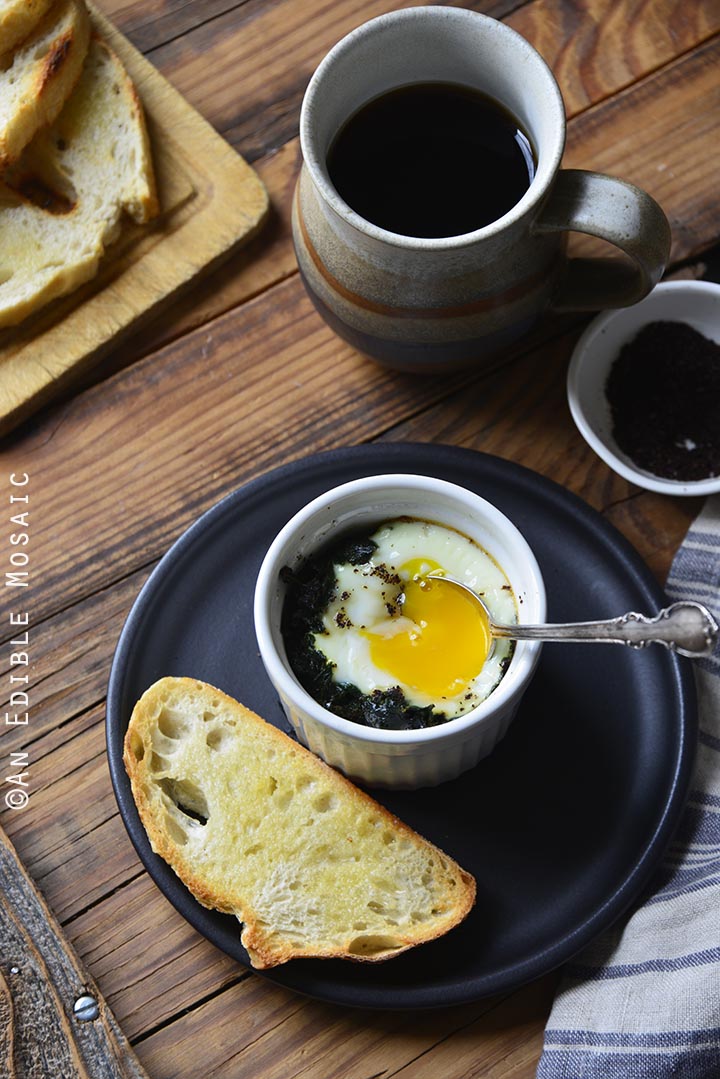 Last Friday evening, Mike and I photographed and catered a private event. It ended up being a pretty random thing for us; a friend of a friend needed a caterer and I was recommended to cook, and as a total bonus Mike was available for photography.

What was the event? A sweetheart of a guy was proposing to his girlfriend (and she said yes!) and he wanted everything to be perfect for her. The evening was a success all around and Mike and I were honored to be part of it. 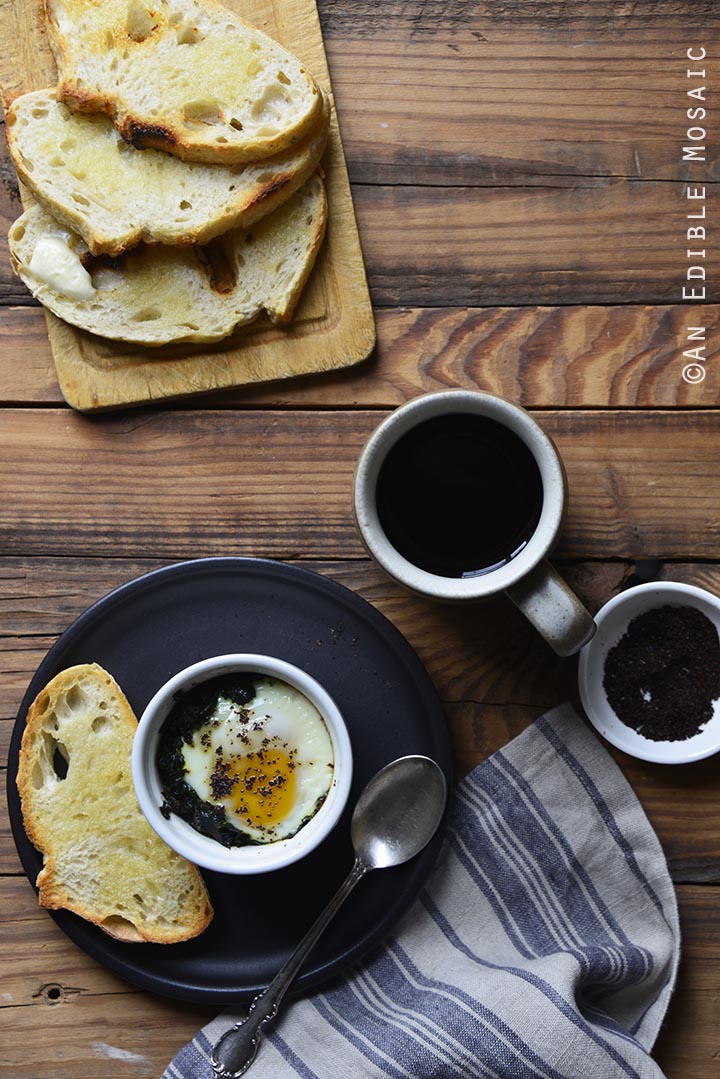 While we were in the planning stages, I sent over four menu ideas for the gentleman to choose from. He chose the one that he thought his girlfriend would enjoy most, and it included this kale filling baked into buttery, flaky turnovers as part of the appetizer selection. My inspiration for those turnovers was Middle Eastern spinach pies, which have a lot of similar flavors going on. But really, for someone like me who is watching their carbs, the filling is the best part anyway. I had a lot of leftover kale and I wanted to make it into something lower-carb than pastries, so the idea of baked eggs came to mind. 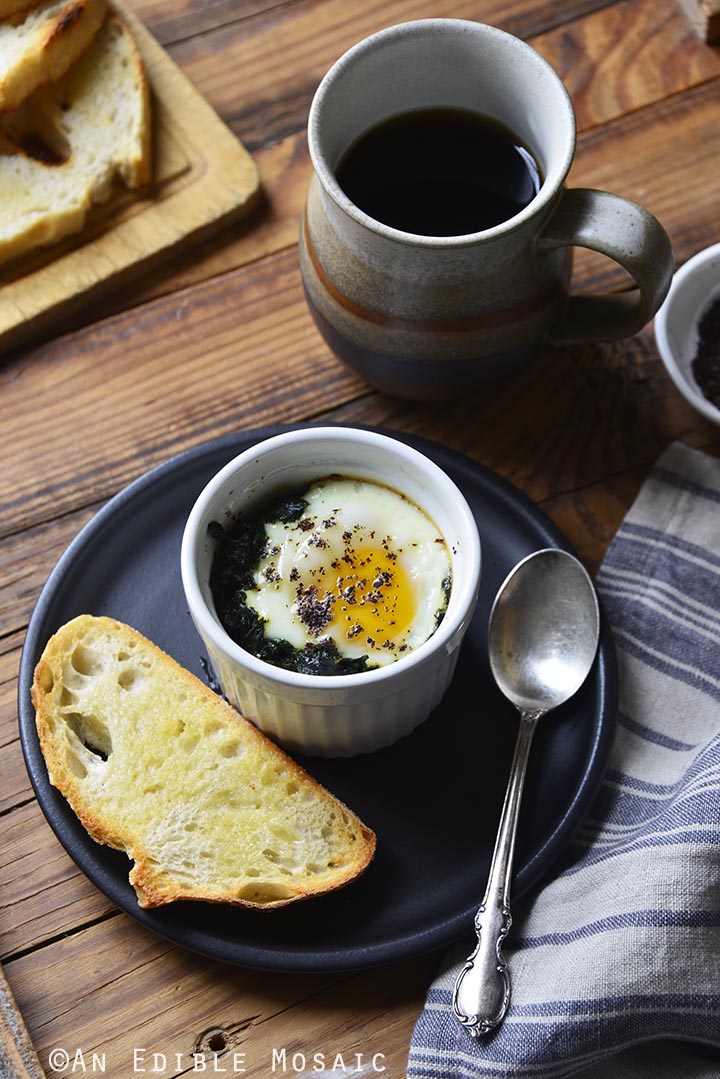 We’re big fans of eggs in my house, but for some reason, baked eggs are actually a pretty rare occurrence. (Omelets and over-easy are our go-to ways to eat eggs!) But baked eggs are something truly special and deserve some time in the limelight. They’re easy to whip up, easy to pack veggies into, and you can do the yolk as soft or as hard as you like (runny for me, please).

Baked eggs make a lovely savory addition to brunch (this recipe is easy to double!), and bonus, you can make these a day ahead of time and then just bake them right before you want to serve them. Eggs really don’t get any easier! 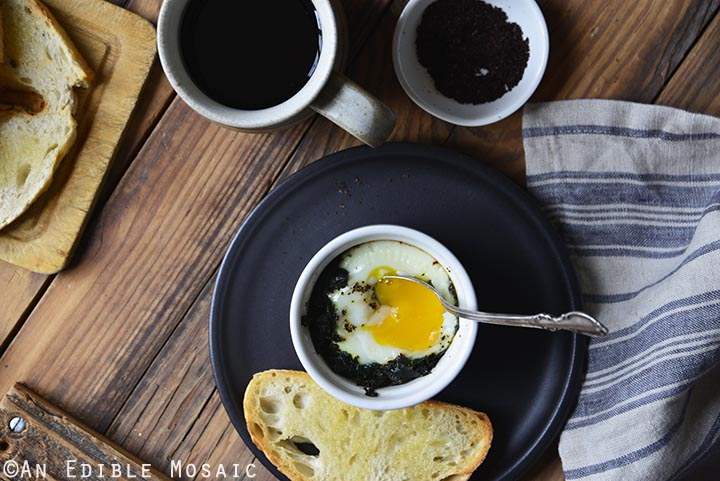 Print
Sumac-Spiced Baked Eggs with Kale {Paleo}
Prep time:  10 mins
Cook time:  30 mins
Total time:  40 mins
Yield: 2 servings
Paleo Sumac-Spiced Baked Eggs with Kale are just different enough to be more interesting than your average egg dish, but not so off-the-wall that they’re not a crowd-pleaser. Sumac adds a pleasantly tangy flavor that nicely compliments the earthy kale.
Ingredients
Instructions
Notes
Coconut Milk: You can use heavy cream instead if keeping this paleo isn’t a concern.

Make-Ahead: Cool the kale mixture completely before putting dividing it between the ramekins. Add the coconut milk (or cream) and eggs, and then cover and refrigerate up to 24 hours before baking. When you want to bake, let the ramekins sit at room temperature for 10 minutes before baking while the oven heats up.

Serving Suggestion to Keep it Paleo: Serve this along with a couple toasted slices of my Best Paleo Sandwich Bread!
3.3.3070