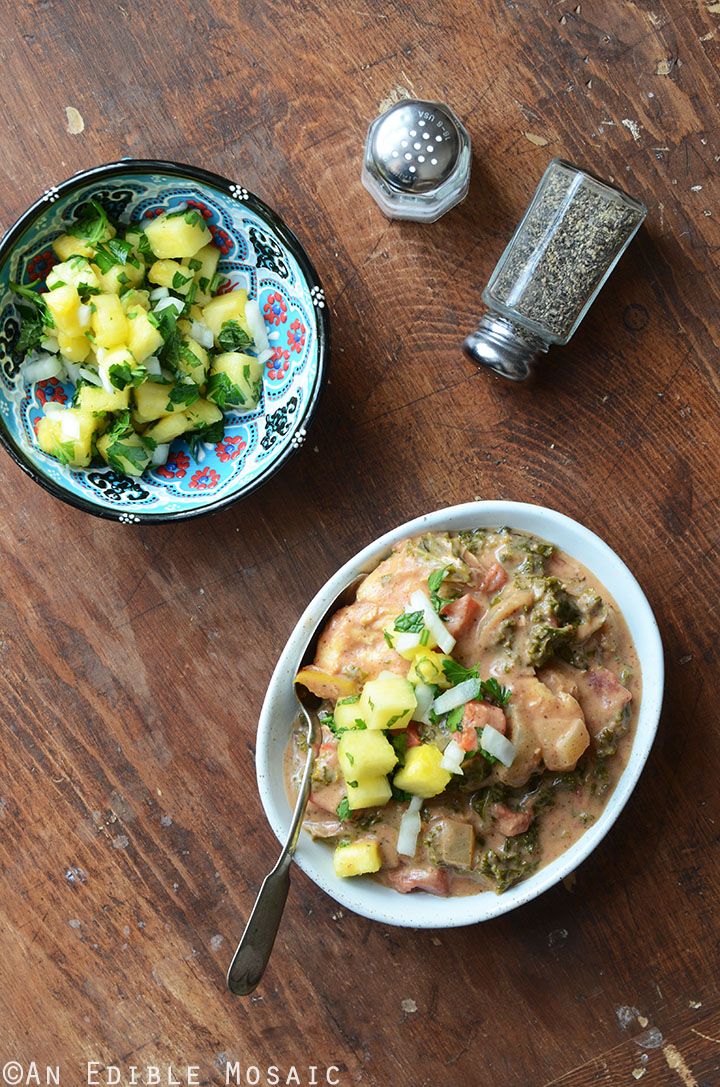 I’ve been making variations of this lovely stew for literally years now. Sometimes I’ll add pineapple right into the stew, and sometimes I’ll sprinkle on a little Vanilla-Scented Toasted Coconut-Cashew Mix on top. Occasionally I’ll skip the greens (but I admit, I much prefer this with greens added!), and if I’m feeling adventurous I’ll use mustard greens, collard greens, or chard instead of kale. No matter what unique twist you put on it, you can’t go wrong with this meal. 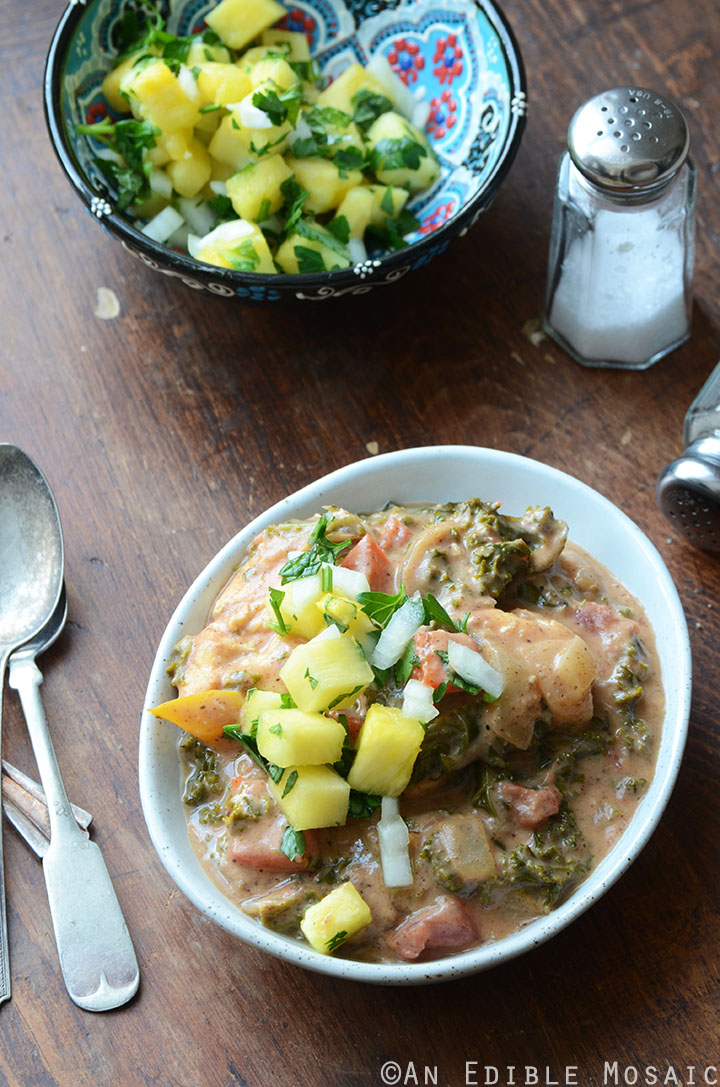 The inspiration for this dish comes from several sources, first and foremost is West African Groundnut Stew, which traditionally uses peanuts. I replace peanut with almond (in the form of butter) to make it a delicious paleo meal. Sweet potatoes or yams are a classic addition, but I generally leave them out for no reason in particular…of course you can add them though! (To keep this stew quick-cooking, you can dice the sweet potato or yam and par-boil it until fork-tender before adding to the stew.)

This stew is actually pretty popular in the paleo world. Melissa Joulwan has a fantastic version of this stew in Well Fed 2 that uses sunflower seed butter and vanilla extract – yum (see the recipe Notes for more on that)! Becky Winkler adds thyme to her delicious recipe in Paleo Planet, which I’d love to try. The Moosewood Restaurant in Ithaca, New York has a fabulous version of this stew, and on their website they say they garnish it with pineapple when they serve it at their restaurant (and I think that’s where I originally got the idea of adding pineapple to the stew or using it as a garnish). 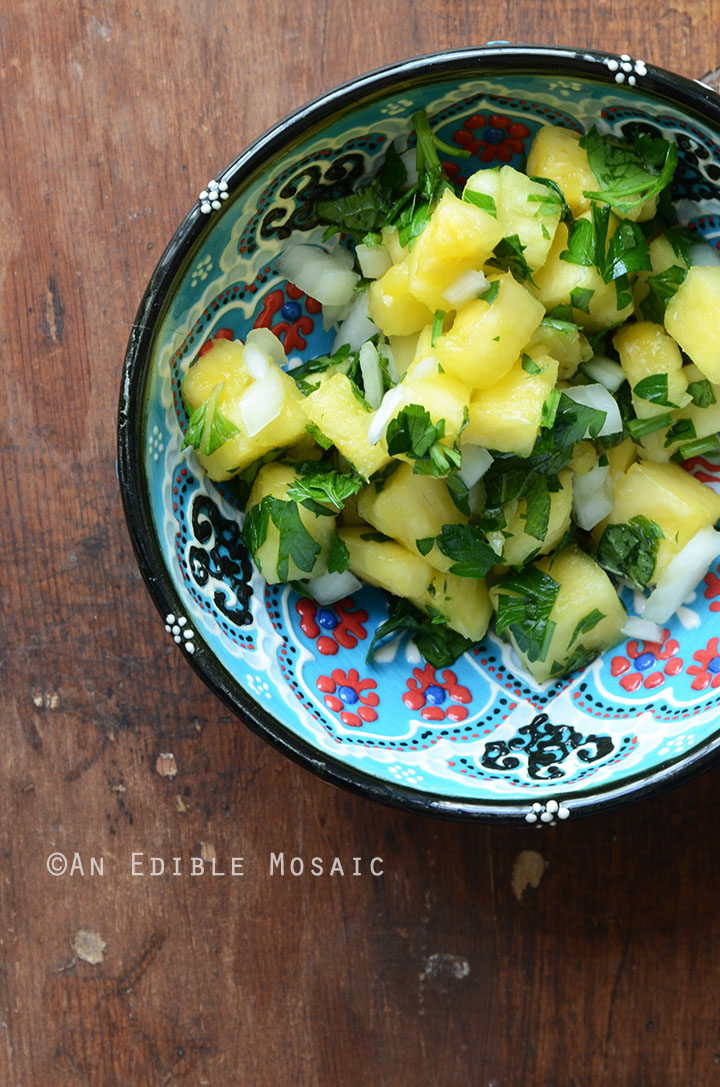 A lot of variations of this recipe don’t add greens, but like I said, I think they’re an integral part of this dish (and why not bump up the nutrition, right?). I honestly can’t remember where I first got the inspiration to add greens to this stew, but recipes for African-inspired peanut butter or almond butter stews with greens are abundant; like on New York Times Cooking, Food52, Cookie + Kate, and Princess Tafadzwa.

You can’t go wrong with a creamy almond butter-based stew that’s chock full of chicken and vegetables! If you’re doing the Whole30, this one is perfect for switching things up a little. 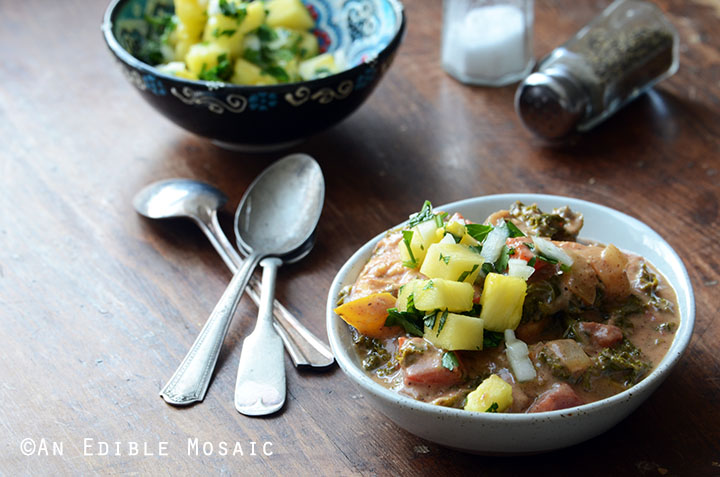 Print
Almond Butter Chicken Stew with Pineapple-Mint Relish {Whole30}
Prep time:  30 mins
Cook time:  20 mins
Total time:  50 mins
Yield: 4 to 6 servings
This nutty, savory, and subtly sweet chicken stew is loaded with flavor and nutrition! Plus it's paleo and Whole30 compliant.
Ingredients
Stew:
Relish:
Instructions
Notes
If You’re Not Doing the Whole30: I highly recommend Melissa Joulwan’s tip of adding ¼ teaspoon vanilla extract (just stir it in once the stew is done cooking).
3.3.3070
Disclosure: This post contains Amazon affiliate links to products I believe in, which means that even though it doesn’t cost you anything extra, I will receive a small amount of money from the sale of these items, which helps me keep this site alive – thank you for helping to support An Edible Mosaic!