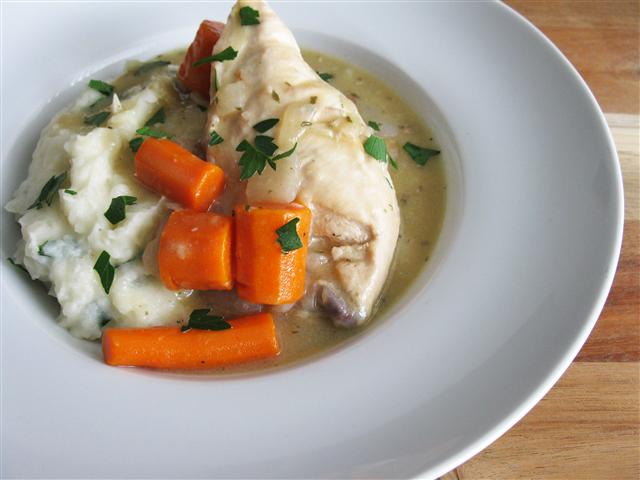 A while back I made a Moroccan-Spiced Chicken Stew that was flavored with ras el hanout (a Moroccan spice blend) and turmeric.  It had carrots and potatoes, and was thickened mainly with onions that were cooked until they melted into the broth and formed gravy.  I thought it would be fun to make another stew using a few of the same main ingredients (chicken, potatoes, carrots, and onions) but with completely different flavorings (such as white wine, thyme, and sage).

In addition to the flavorings, there are a couple of other differences between the two dishes.  Instead of putting the potatoes into this stew like I did with the Moroccan dish, I made a potato/celery root mash to serve the stew on top of.  Also, instead of thickening this stew with onions, I used a beurre manié (which is just a mixture of butter and flour).

The end result was fantastic and completely different from its predecessor.  I loved both, but truth be told I liked this one just a little bit more.  Mike also thoroughly enjoyed both stews, but slightly preferred the Moroccan one.  (I guess we really do complete each other, lol.) 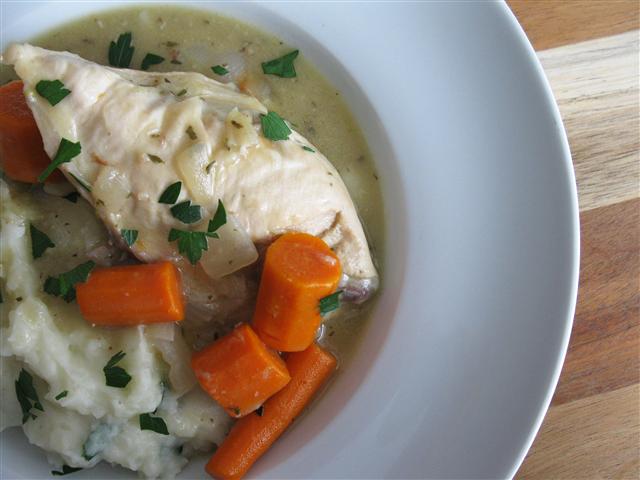 Chicken Stew with a French Flair

2 smallish (about 2 1/2 to 3 lb each) whole chickens, quartered, skim removed, and trimmed of fat

5 large carrots, peeled and cut into 1 to 2-inch pieces

Veggie mash of your choice, such as potato, celery root, turnip, or cauliflower (for serving)

Rinse chicken with cold water and pat dry.  In a large Dutch oven, heat oil over medium-high to high heat.  Season chicken on both sides with salt and pepper; dredge chicken in flour, then gently shake off any excess.  Add half the chicken to the hot oil and sear until browned on both sides (about 4 minutes per side).  Remove seared chicken from Dutch oven, and cook remaining chicken the same way.  Remove second batch of chicken from Dutch oven.

Turn off heat and add white wine (it will bubble up), then turn heat on high and use a wooden spoon to scrape up any brown bits that have formed on the bottom.  Cook a few minutes, until wine is reduced by about 3/4.  Add chicken stock, chicken (with juices), onions, carrot, garlic, bay leaf, thyme, sage, 1/4 tsp salt, and 1/8 tsp pepper; bring up to a boil, then turn heat down to low, cover the pot (leaving lid ajar), and let it simmer 45-60 minutes (stirring occasionally).

Remove chicken and carrots with a large slotted spoon and set aside for now; turn heat up to high, and cook (uncovered) about 20 minutes to let the sauce thicken and reduce (stirring occasionally).  Whisk in beurre manié and boil 3 minutes.  Add chicken and carrots back and cook 2 minutes to reheat.  Taste and season with salt and pepper as desired.

Serve on top of a veggie mash, garnished with fresh minced parsley. 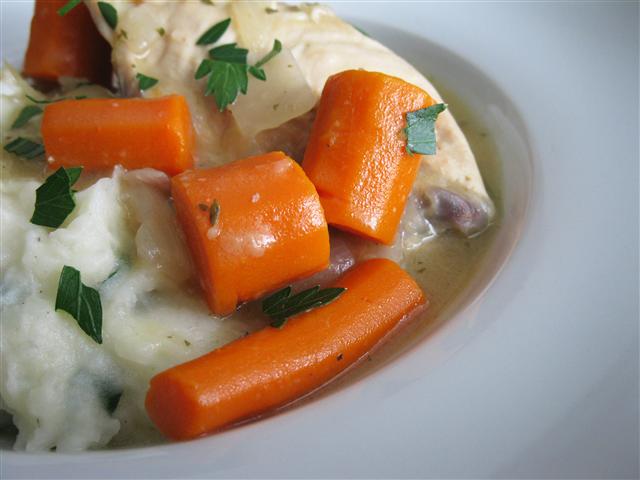