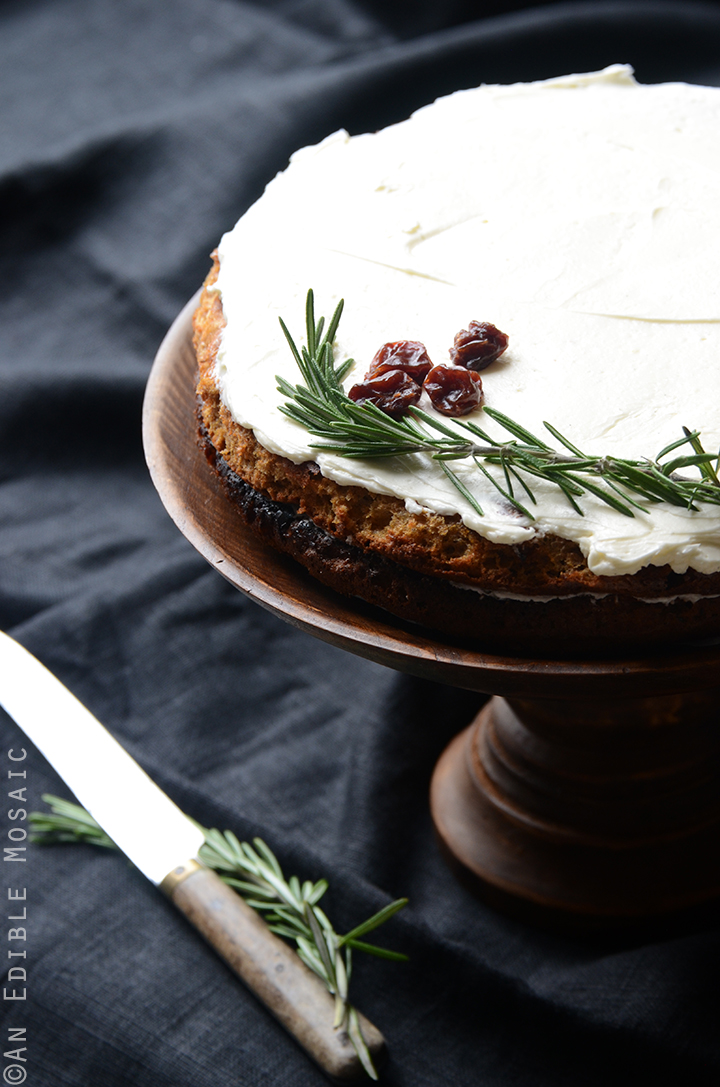 Note that this post is not sponsored in any way, nor is it affiliated with Downton Abbey! It is dedicated to Downton fans, as well as all fans of cake. Does that just about cover everyone? ;)

Love in many forms comes and goes, a fact of life that we’ve seen over and over again in Downton Abbey. There’s been a lot of heartbreak on this show; Sybil and Tom Branson, Edith and Michael Gregson, Mary and Matthew, Robert and his beloved dog Isis, to name just a few. But there has also been found love. 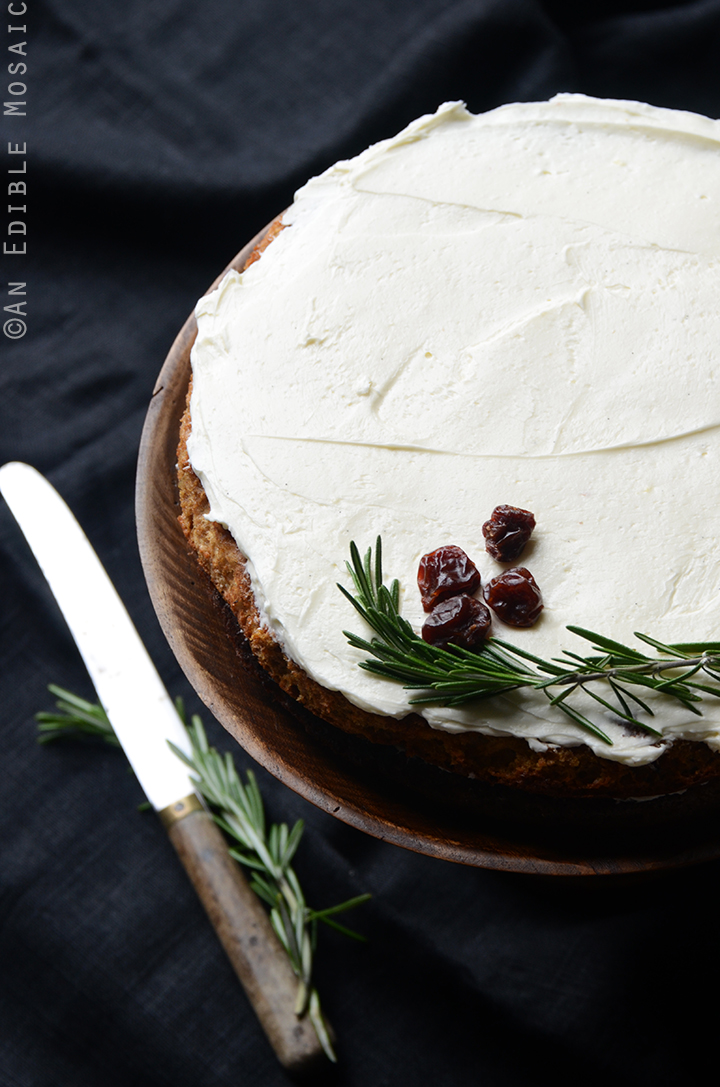 Anna and Mr. Bates, Rose and Atticus, and maybe most surprisingly, Mrs. Hughes and Mr. Carson, who are tying the knot this season. Who says you can’t find love after a certain age?

Every wedding deserves a cake, and for their special day I wanted something humble, but classy. Something wintry, but appropriate or easily adaptable for all seasons. Something nearly classic that would suffice as a wink and a nod to a traditional English fruitcake, but with a slightly whimsical twist. And that’s how this cake was born. 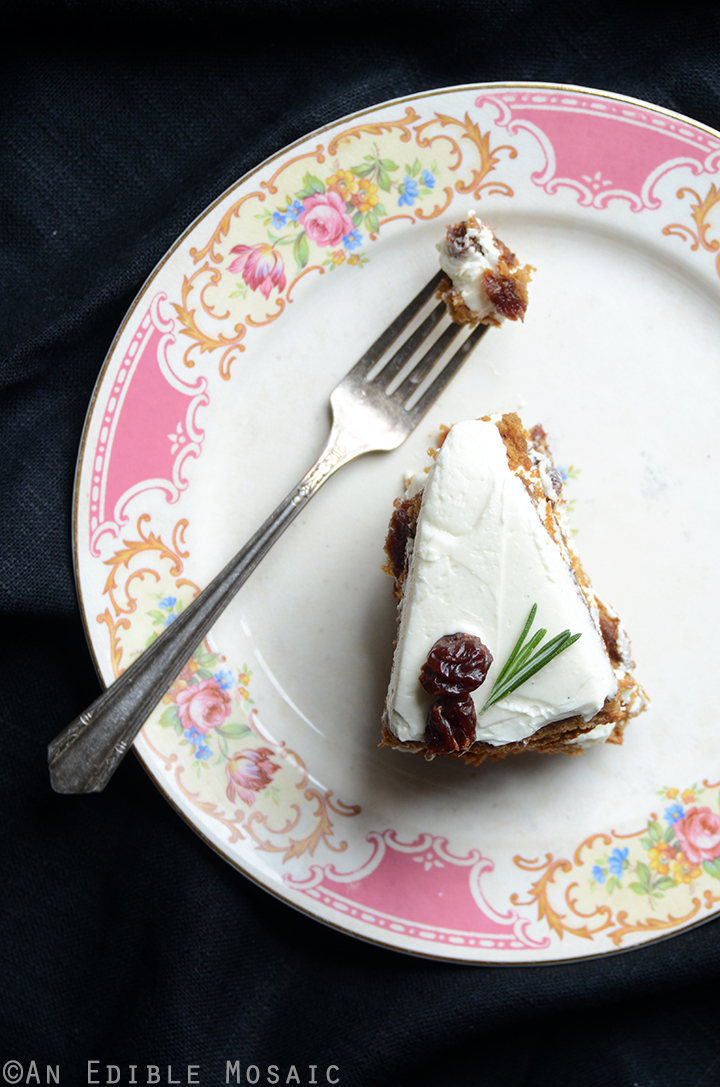 I wanted a very rustic look for this cake. I didn’t frost the sides because I wanted the rough brown texture of the cake to show, and I used a scruffed-up sprig of rosemary instead of a perfect sprig. A simple wooden cake pedestal and a piece of black fabric that plays so prettily with light and shadow completed the look I was going for. To me, it’s the imperfections that make this cake perfect.

I kept the cake itself paleo-friendly (it was inspired by my Paleo Lemon-Vanilla Almond Cake, but with a spongier, less dense texture), but I think even non-paleo folks will go crazy for it. This cake is perfectly sweet without being overly so, is flavorful with almond and cherries, and has great texture. 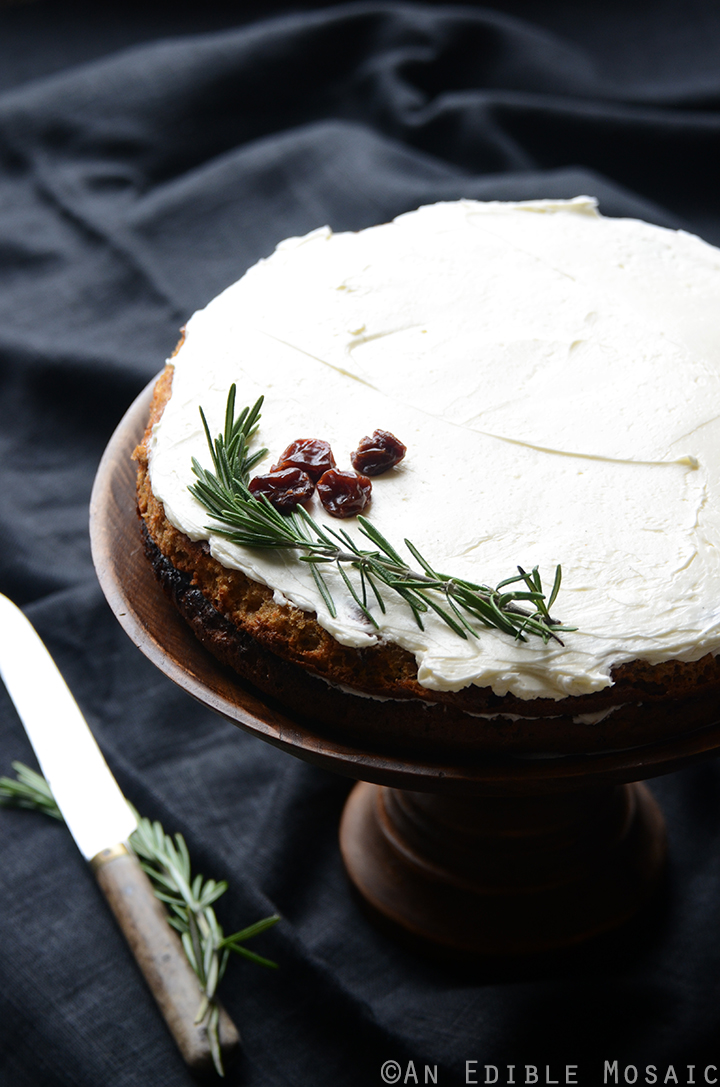 For Italian meringue buttercream, you make a sugar syrup (just boil sugar and water; that’s where I added the subtle rosemary flavor by adding a sprig of rosemary) and beat it into whipped egg whites. After having the living daylights beaten out of them, the egg whites and sugar syrup turn into a lovely meringue, and at that point room-temperature butter is beaten in. (As you might have noticed, there’s a lot of beating involved in making this frosting; accordingly, I would only recommend making this type of buttercream using a stand – not hand-held – mixer!) 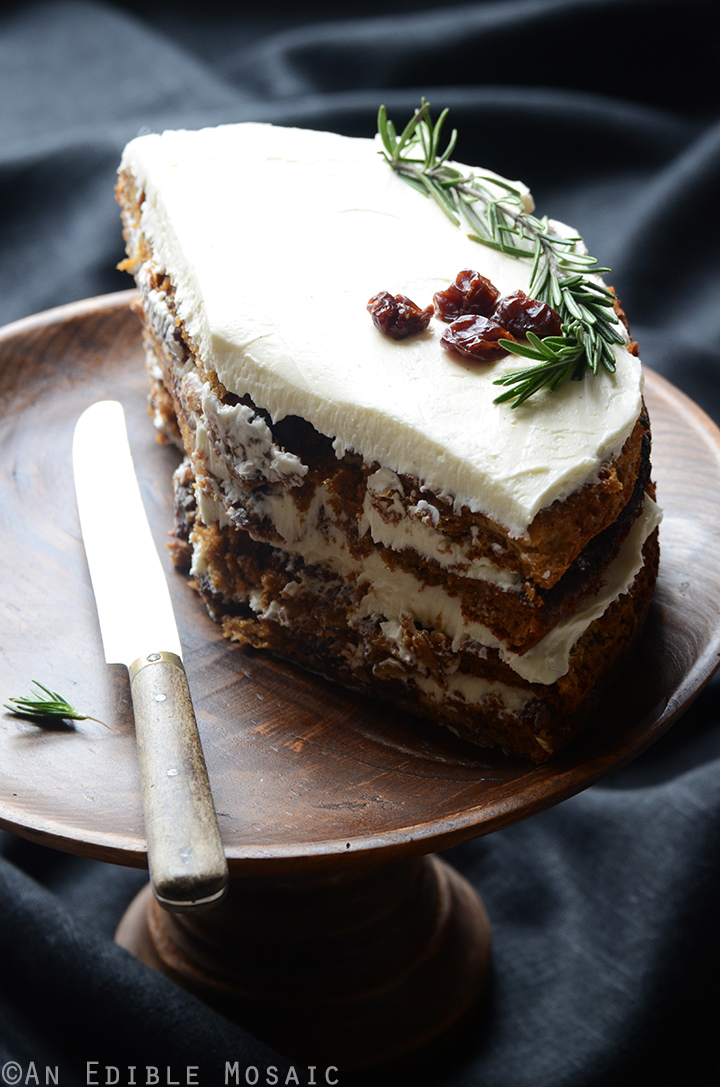 I give directions in the Notes on how to make a four-layer cake like this if you prefer!

Another thing I want to mention is that as-is, this recipe makes one (9-inch), two-layer cake. I give directions below on how to go about it if you want a really impressive four-layer cake though.

If you’re a serious Downton fan, here are a few other goodies you won’t want to miss:

Have you made a Downton Abbey-inspired dish? 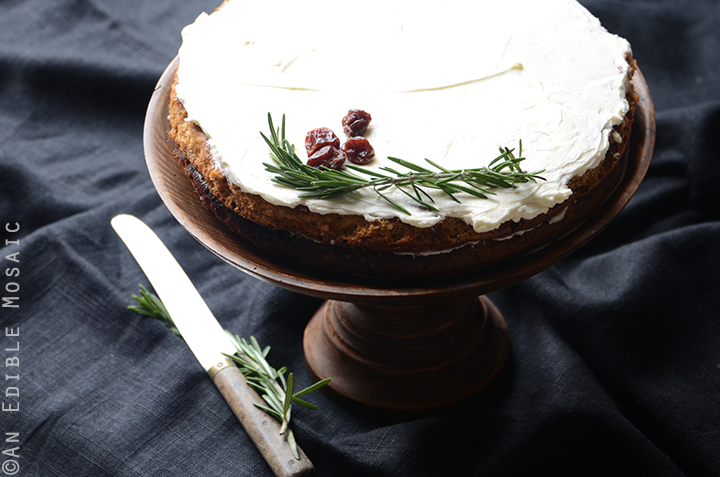 Print
Gluten-Free Cherry Almond Cake with Rosemary Vanilla Bean Buttercream
Prep time:  45 mins
Cook time:  15 mins
Total time:  1 hour
Yield: 1 2-layer (9-inch) round cake, about 12 servings
Gluten-Free Cherry Almond Cake with Rosemary Vanilla Bean Buttercream makes a lovely winter cake that’s fit for a simple wedding, or simply dessert for a family supper.
Ingredients
Gluten-Free Cherry Almond Cake:
Rosemary-Vanilla Bean Italian Meringue Buttercream:
Other:
Instructions
Notes
To Make This a 4-Layer Cake: You will need to make 2 of the cake recipes. I recommend making 1 batch of 2 layers, cooking them, and then making another batch so you end up with 4 layers. If you don’t want such a thick layer of frosting (more like the "naked" cakes that are so popular right now), then this will be enough buttercream for a 4-layer cake; however, if you want the amount of frosting that’s pictured, you will also need to make a double batch of frosting for a 4-layer cake.
3.3.3070