This Cornbread Stuffing (aka Dressing) Recipe with Turkey Sausage and Sage is crispy along the outside, and is flavorful with fresh herbs, spices, and aromatics. No soggy, boring stuffing here!

Cornbread stuffing is hands-down my absolute favorite kind of stuffing. Of course it’s the perfect side dish for Thanksgiving or Christmas, but stuffing pairs well with just about any kind of meat you could possibly want to serve it with!

Or top it with a fried egg and serve it with a big salad and call it a meal, no meat required. (This is one of my favorite things to make with stuffing leftovers!)

For me, any add-ins to cornbread stuffing (like sausage, veggies, apples, chestnuts, and other stuffing classics) are just gravy, so to speak.

What is the Difference Between Stuffing and Dressing?

The difference between stuffing and dressing is the cooking method.

Stuffing is traditionally stuffed into the body cavity of a turkey or chicken and cooked. Alternatively, dressing is typically cooked in a separate dish in the oven.

Technically, because this Cornbread Stuffing isn’t stuffed into a turkey or chicken, it’s dressing, not stuffing! However, up north where I’m from we call it stuffing.

This dressing recipe uses homemade Cornbread Muffins as the base, but you could also use store-bought muffins. Using cornbread muffins lends great flavor and helps keep the stuffing moist.

I wanted to add sausage to this dressing, but I have a hard time finding a good non-pork sausage in my area. Instead, I used ground turkey plus a few classic sausage seasonings, such as maple, sage, thyme, nutmeg, and fennel, to mimic the flavor of sausage.

Pro Tip: Feel free to omit the ground turkey, maple, nutmeg, and fennel and use one pound of your favorite bulk sausage instead. I would still add the fresh sage and thyme though!

Fresh herbs really brighten up the flavor here, and that isn’t something you get out of a box of stuffing mix! If you’re not used to making homemade stuffing, after you realize how its flavor blows boxed stuffing out of the water, I think you’ll be hooked.

What Do You Eat with Cornbread Stuffing?

I know the “holiday only” reputation that stuffing has, but don’t wait for next Thanksgiving or Christmas to make this delicious side dish!

Eat this Cornbread Dressing with any of the following: 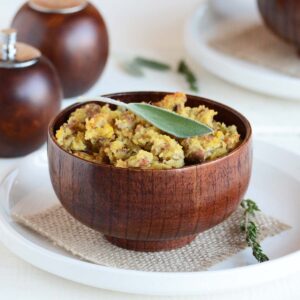 This post was first published on An Edible Mosaic on December 17, 2011. I updated it with more information on November 22, 2022.