This Baked Apple Doughnuts Recipe with Apple Cider Glaze or Cinnamon Sugar makes donuts that are moist, full of warm spice + apple flavor, and sweetly scented of fall. And it takes just 30 minutes from start-to-finish! 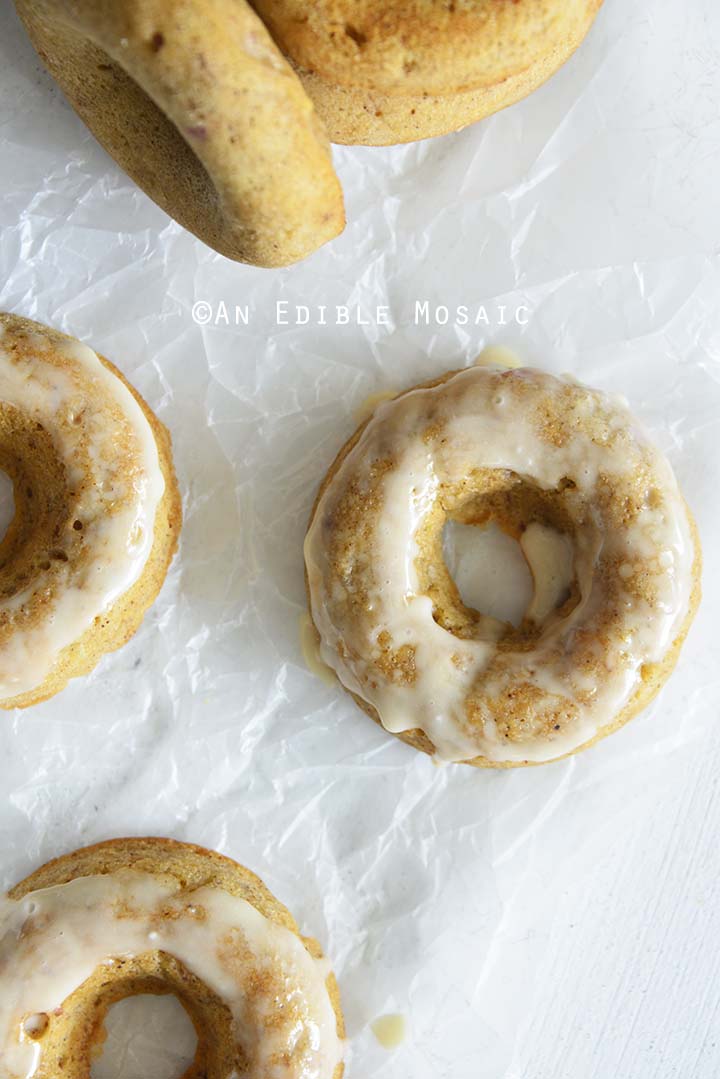 It’s the weirdest thing ever. I don’t eat doughnuts/donuts all year long until autumn rolls around!

January through August, they don’t cross my mind even once. They’re a non-issue as far as temptation goes. Then September hits and all I can think about is how badly I want an apple fritter, bear claw, Boston cream, or my all-time favorite, a French cruller.

I know there’s no rhyme or reason to it; it’s just one of my quirks.

So instead of fighting the urge, I usually just go with it and have some fun in the process. 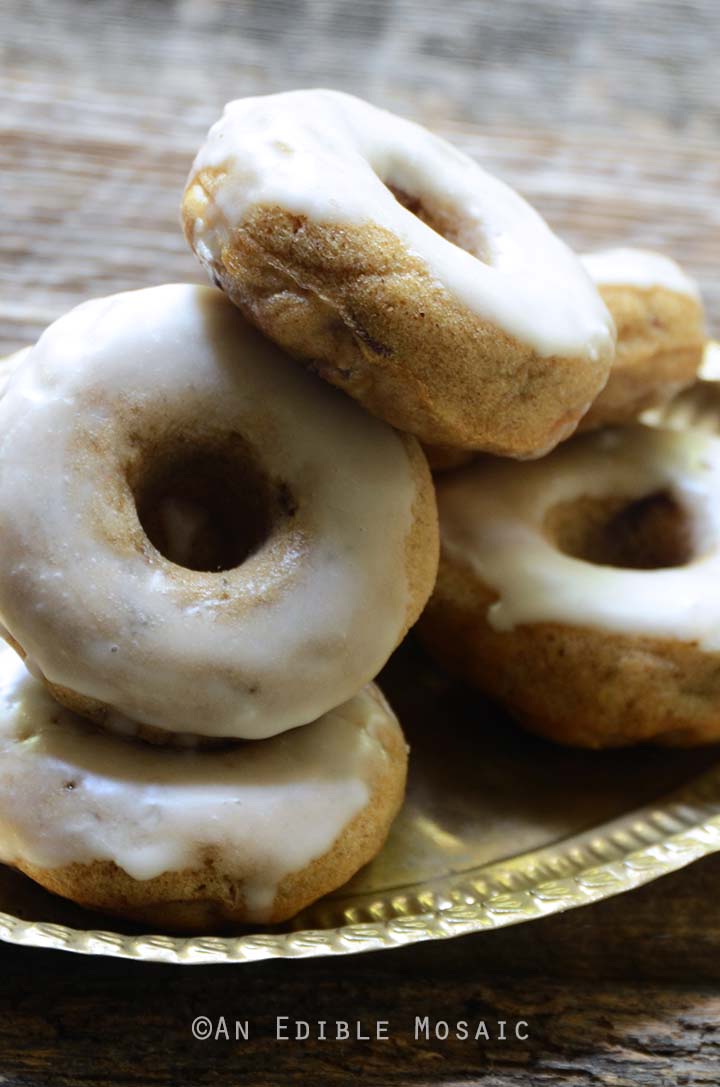 I’m going to make the case for homemade vs. bakery-bought donuts with this Baked Apple Doughnuts Recipe!

Firstly, these apple cider doughnuts whip up fast, and if you go with the cinnamon sugar coating option instead of glaze, you don’t even need to wait for them to cool.

Also, as far as doughnuts go, this homemade version is a bit healthier. These are baked, so that right there is a plus! And if you leave off the apple cider glaze or cinnamon sugar coating, they’re relatively low in sugar.

Additionally, of course making your own doughnuts is cheaper than buying them from a bakery.

And maybe the best thing of all, this Apple Donuts Recipe makes your home smell like fall as they bake. 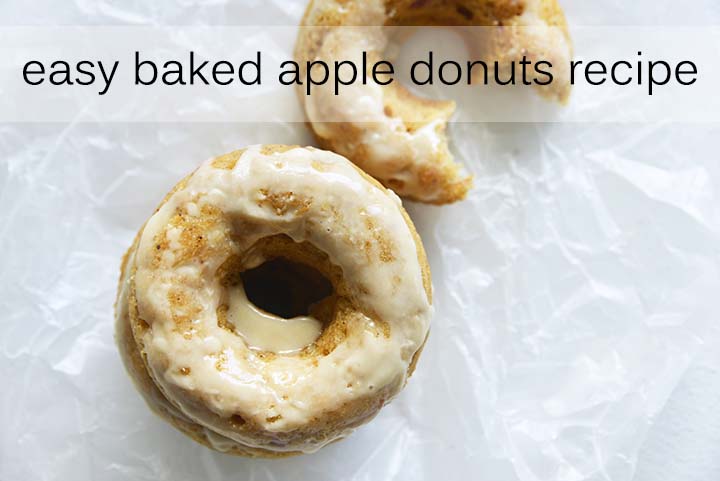 The good thing about this apple donuts recipe is that you might already have everything on hand to make it!

Pro Tip: For this recipe, use either 1 1/2 teaspoons of apple pie spice mix or a mixture of cinnamon, allspice, nutmeg, cloves, and ginger listed in the recipe below.

How to Make Baked Apple Doughnuts: 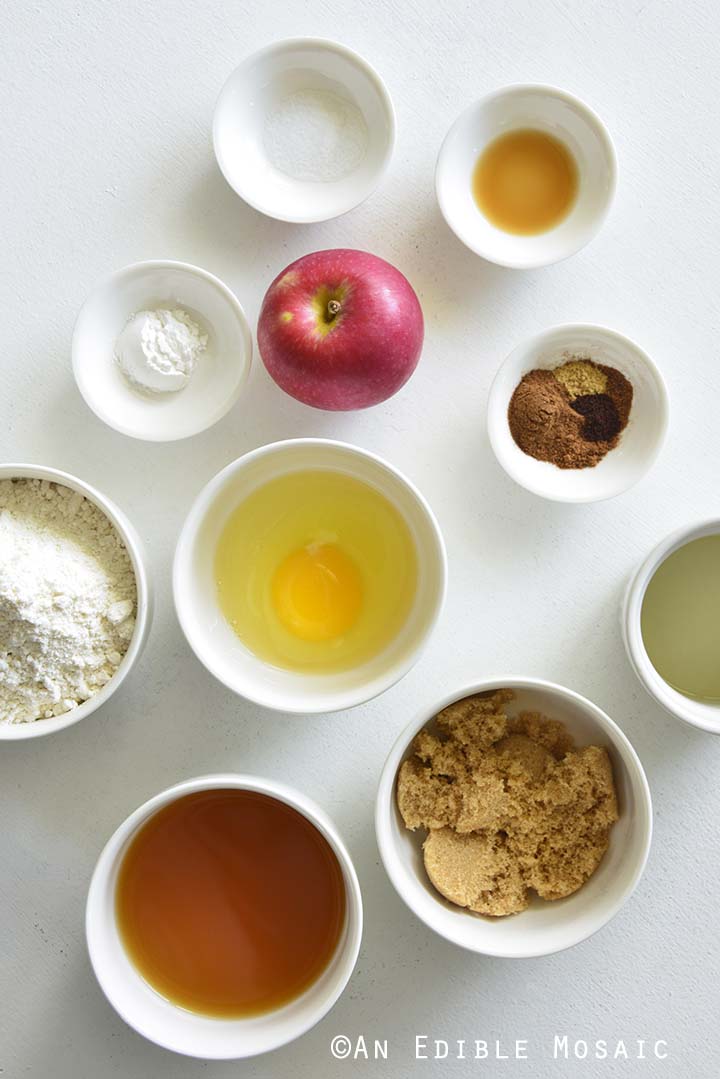 Measure out all your ingredients. 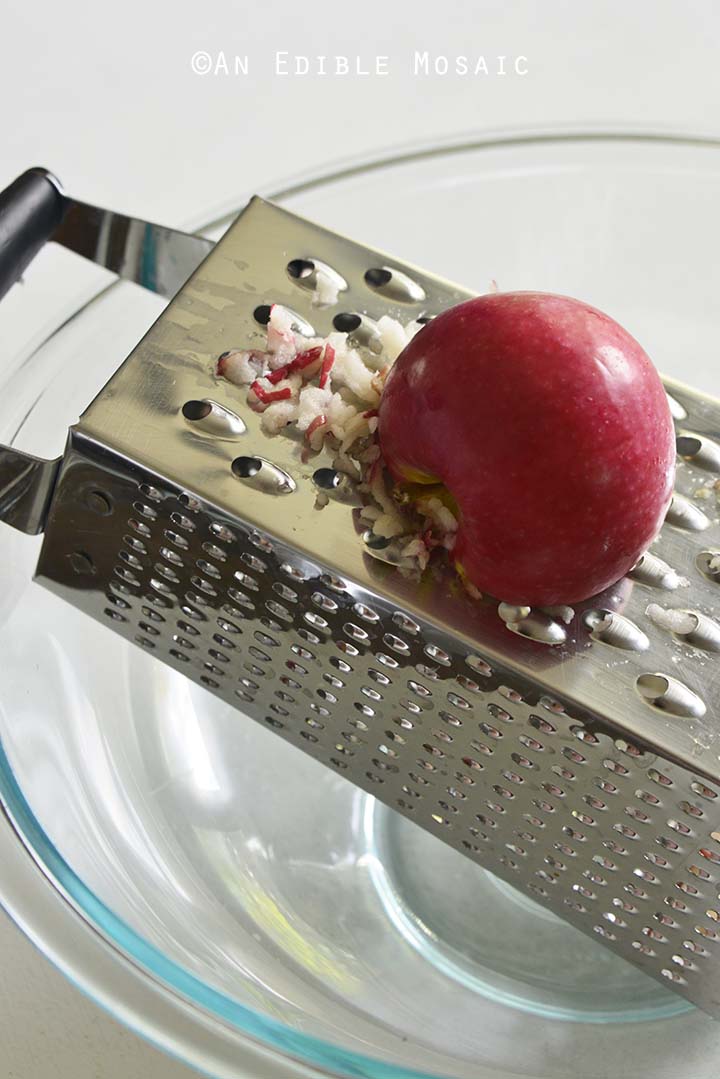 Wash a small apple, and then grate it (peel and all!). 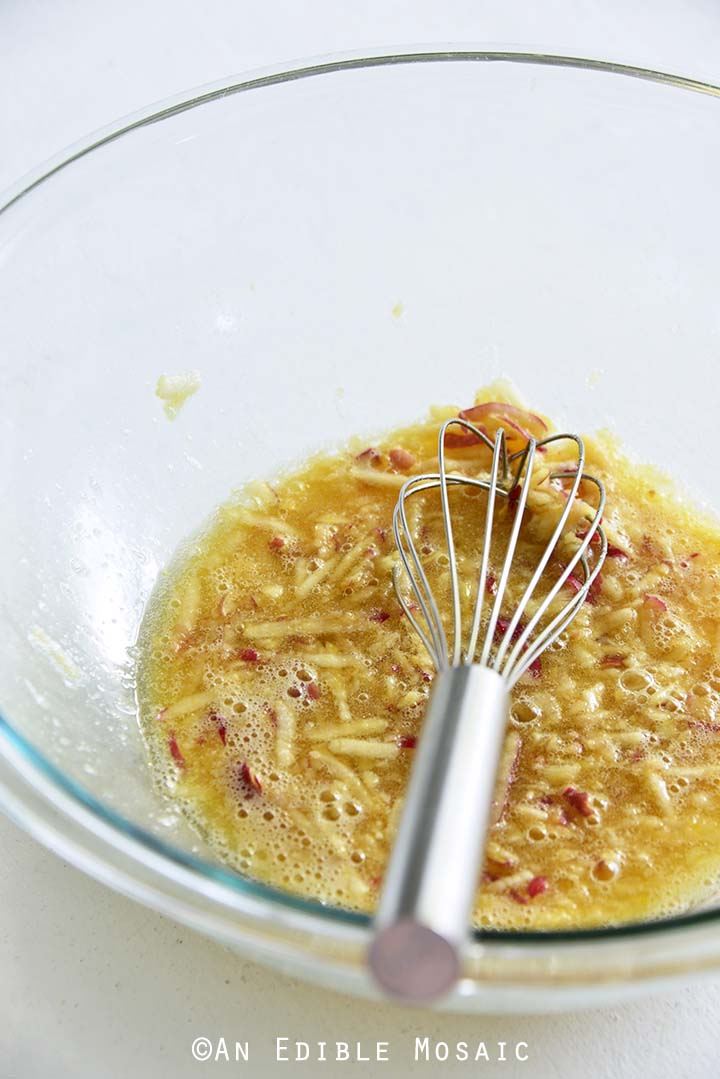 Whisk together the wet ingredients. 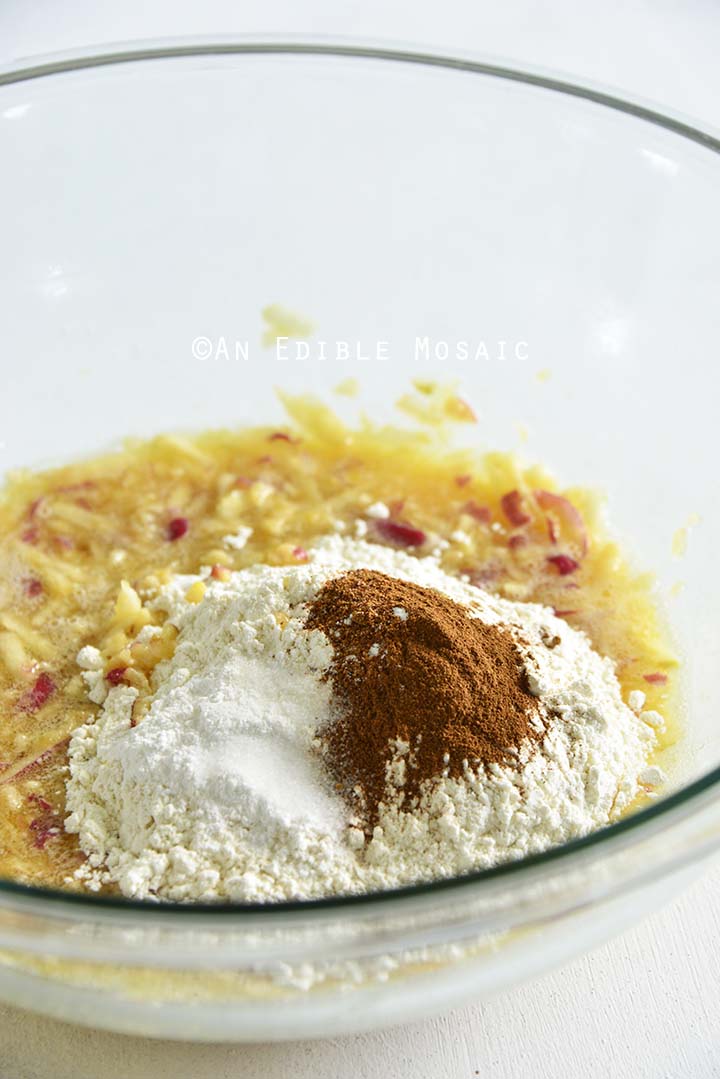 Add the dry ingredients to the wet. 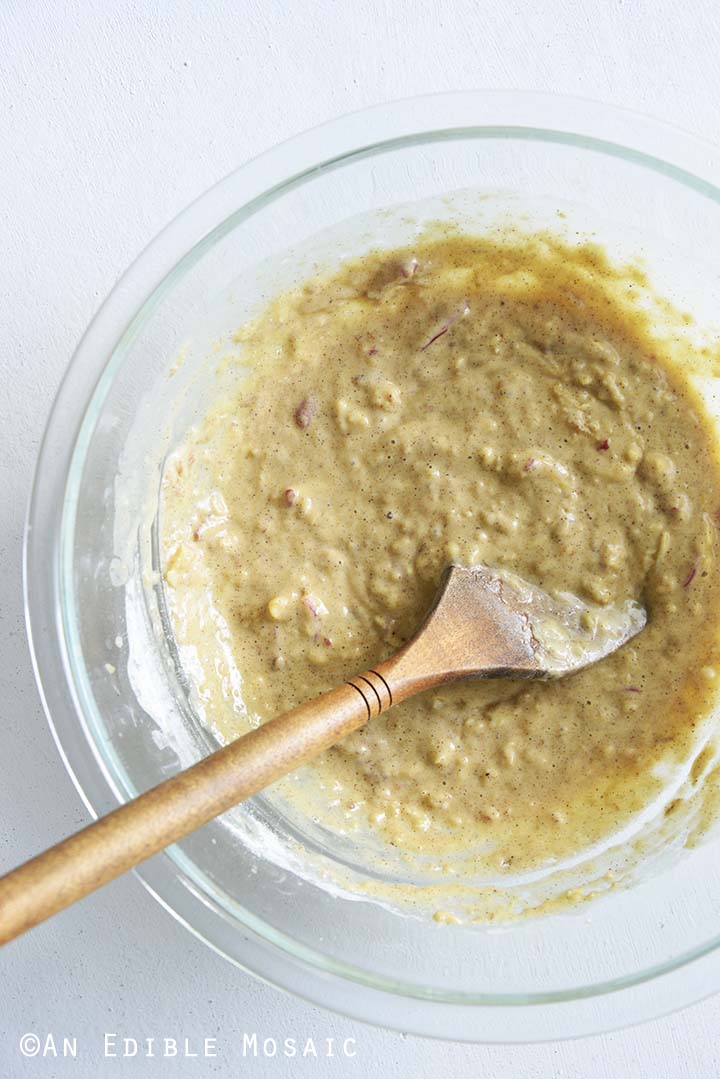 Stir just to combine and be careful not to over-mix! 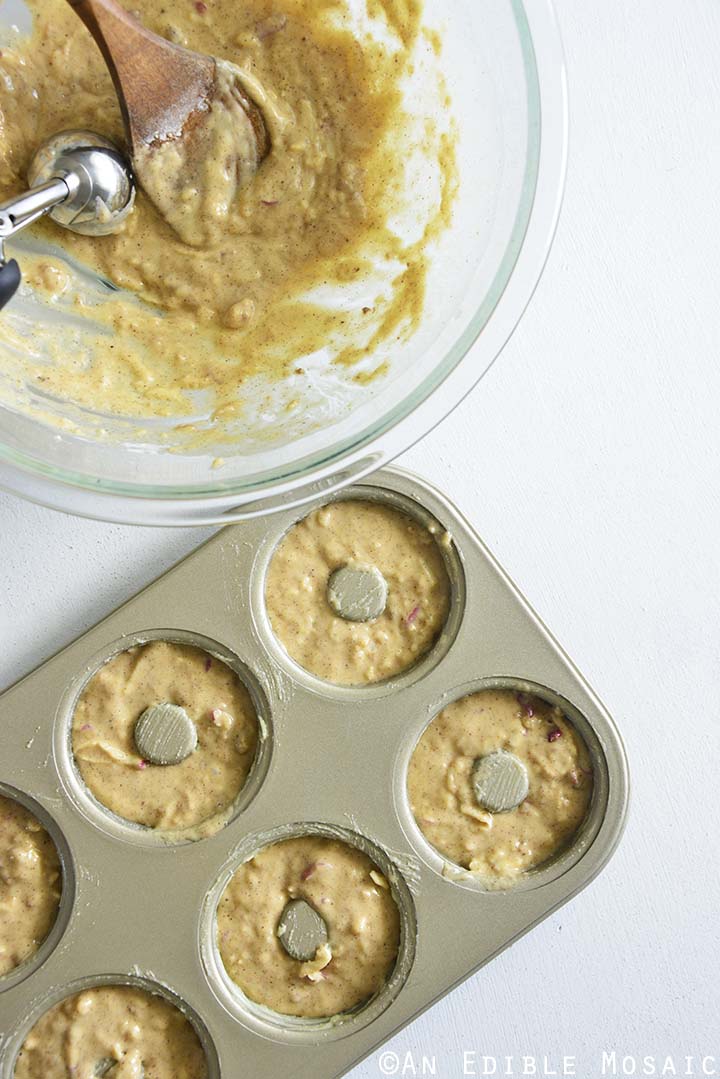 Scoop the batter into a greased donut pan.

Bake these apple doughnuts until a toothpick inserted inside comes out clean or with just a couple crumbs. 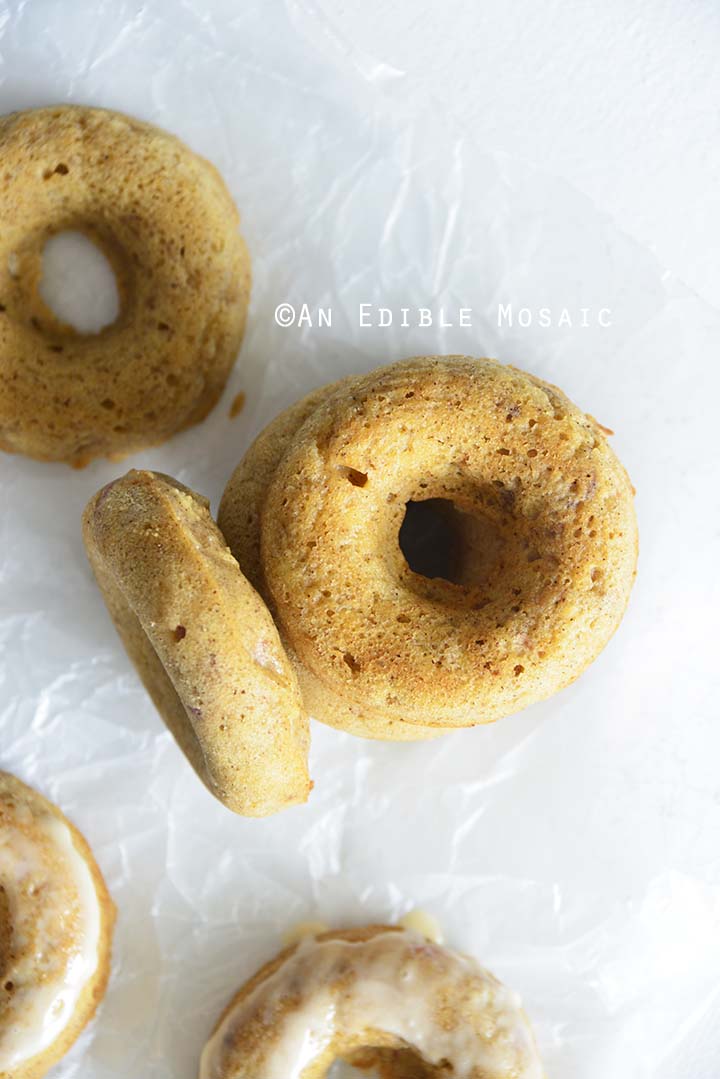 You can eat them as-is! They taste similar to apple muffins like this. 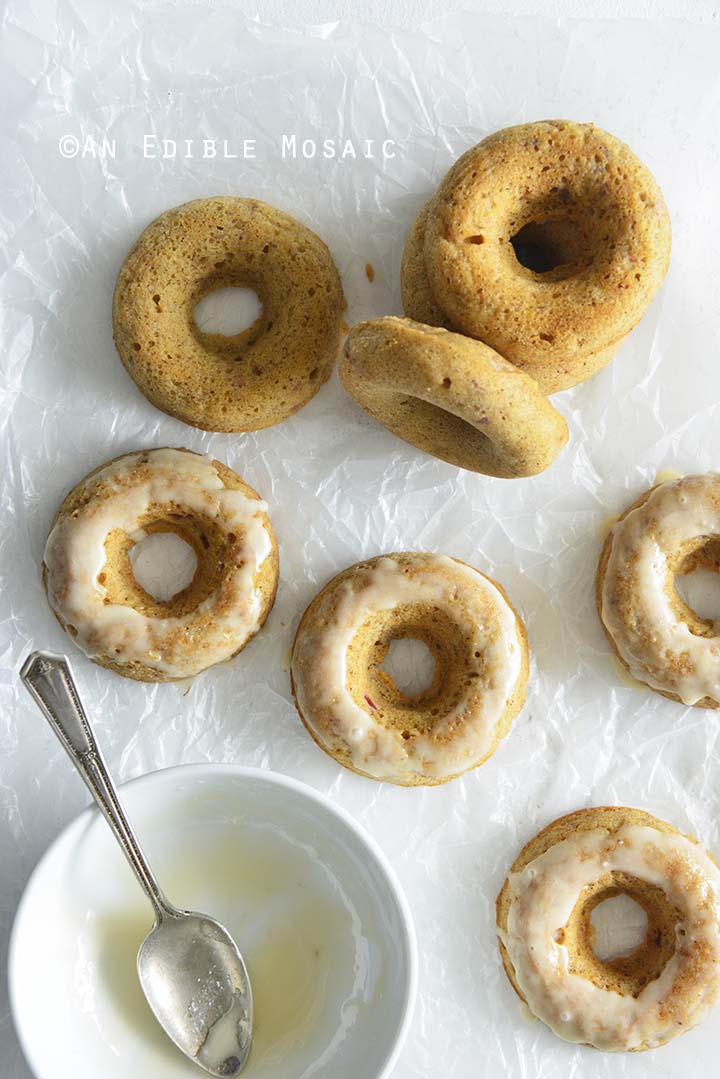 Or you can top with apple cider glaze. 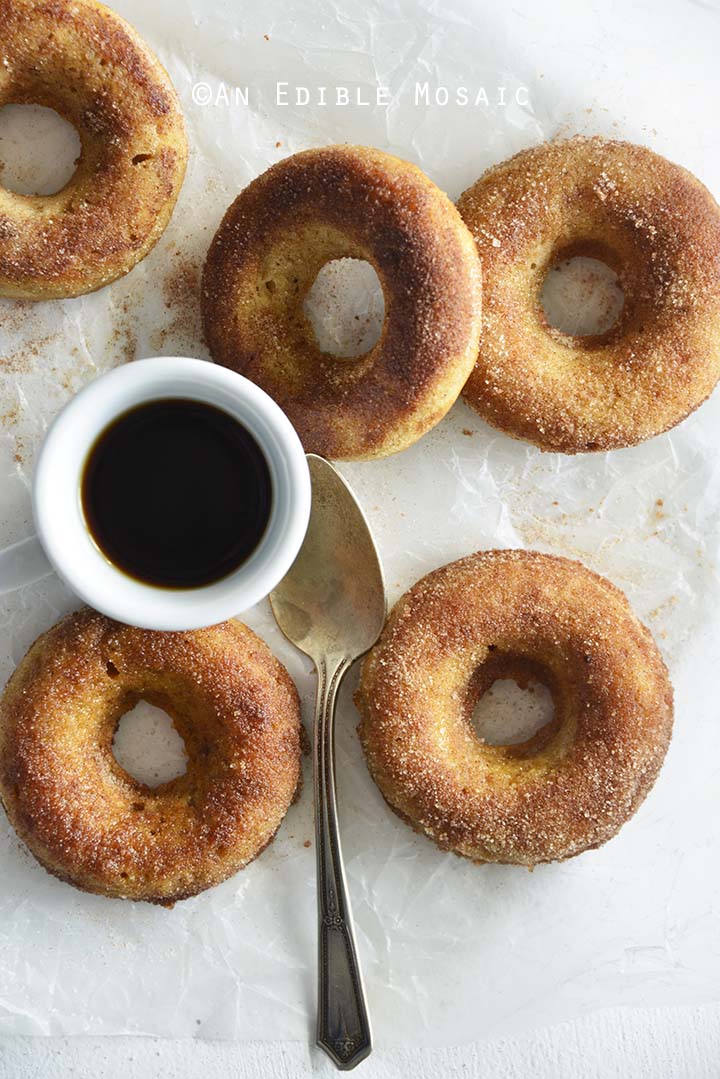 Instead of glaze, you can brush the donuts with butter and roll them in cinnamon sugar to coat.

What are Apple Cider Donuts?

Apple Cider Donuts (also known as Apple Cider Doughnuts) are a form of “cake donut” that contain apple cider and warm spices, such as cinnamon and nutmeg. Cake donuts are leavened with baking powder instead of yeast, and are either fried or baked.

This Apple Doughnuts Recipe is basically a recipe for baked Apple Cider Donuts!

Like most cake donuts, these Apple Doughnuts are best if you eat them the first day they’re made. However, you can store them in an air-tight container at room temperature for up to 3 days.

Pro Tip: After the first day, I like to heat these donuts for about 15 seconds in the microwave before eating. 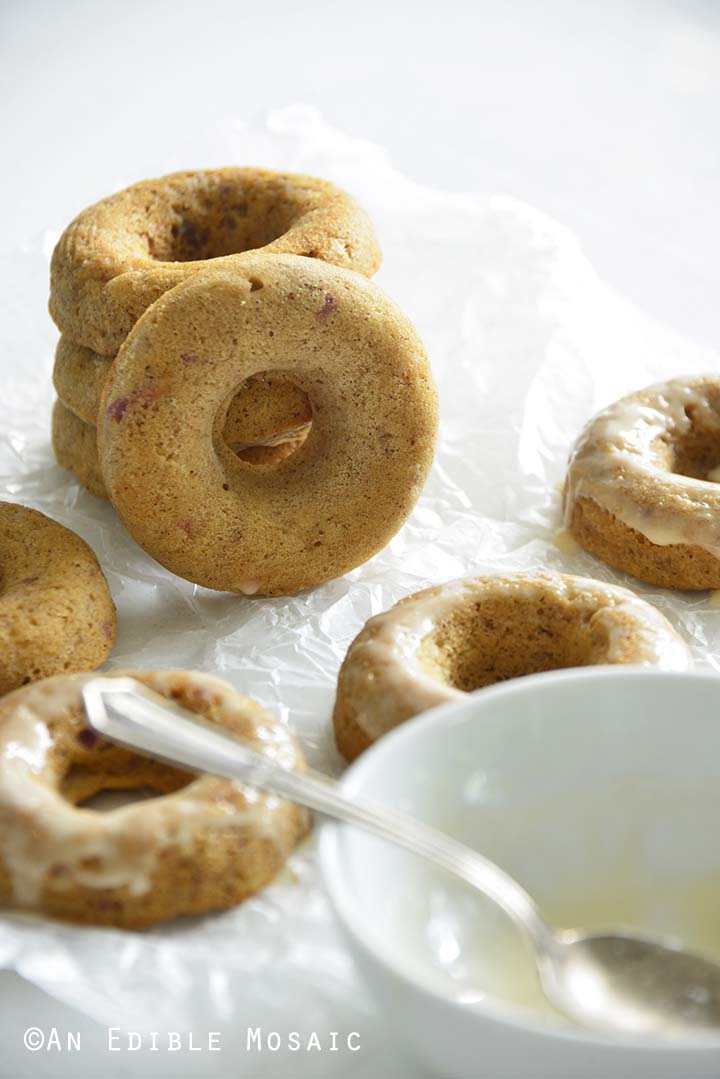 Do Baked Donuts Taste the Same as Fried?

Baked and fried donuts taste different, but they’re both delicious in their own way.

Fried donuts are crispier outside and have a darker color. Additionally, fried donuts sometimes have an oily taste or texture.

On the other hand, baked doughnuts have a softer texture outside with no oily taste. I find that baked donuts taste similar to muffins. 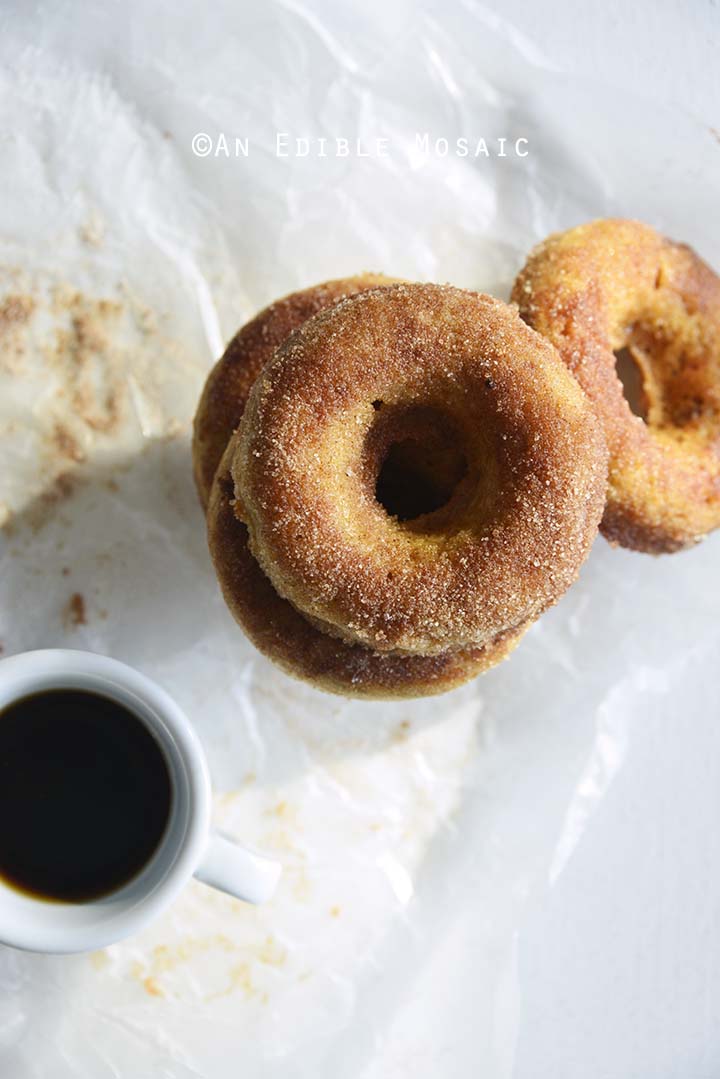 What to Serve with Apple Donuts

You can serve these doughnuts with coffee or tea.

But I think these are best served with crisp apple cider (either ice-cold in a glass or spiced and steaming-hot in a mug) for maximum fall effect. 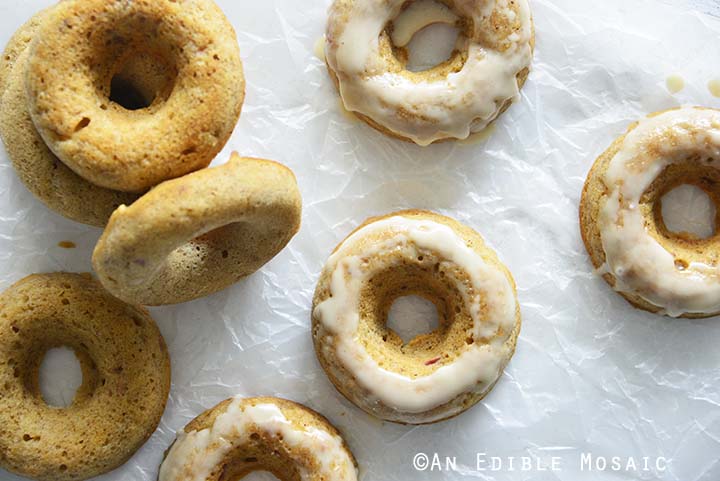 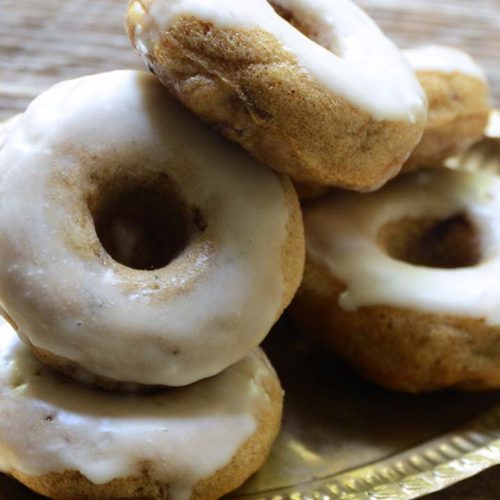 For the Apple Cider Glaze Option:

For the Cinnamon Sugar Option: 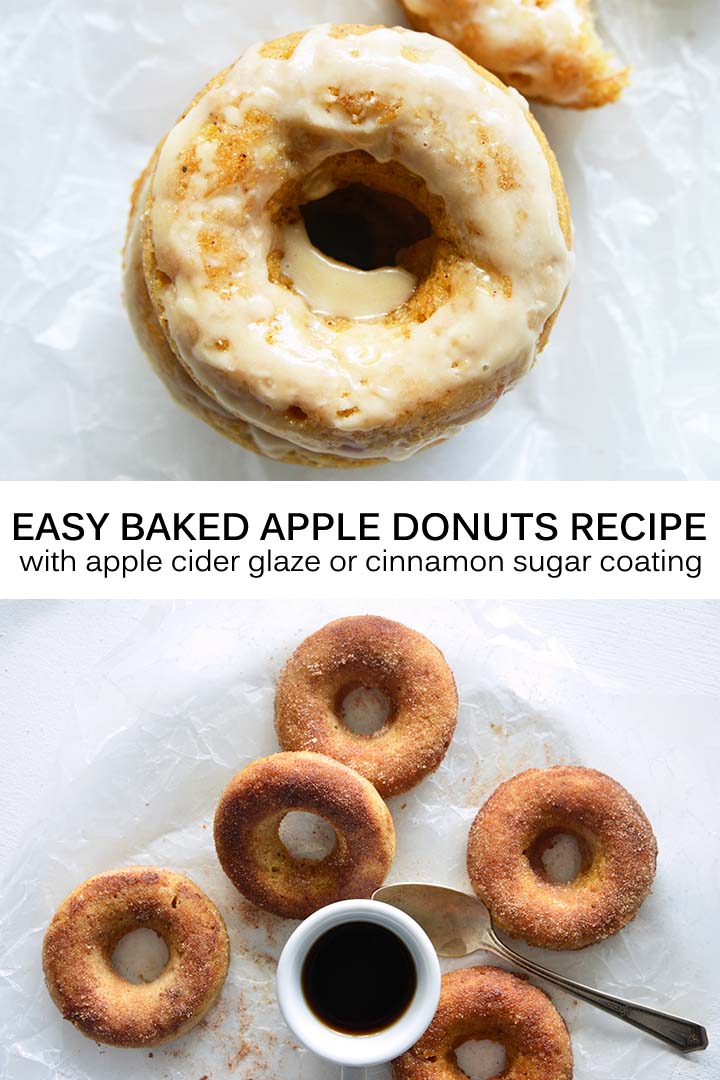 This post was first published on An Edible Mosaic on October 8, 2014. I updated it with more information on November 10, 2020.