When I lived in the DC area, there was an Afghan restaurant about 5 minutes away that had the best eggplant. It was a simple side dish, often overlooked by the more popular sides like bread and rice.

(Let me pause for a minute to say, if you’ve never tried Afghan bread, you’ve been missing out! It’s similar to Indian naan, but a bit thicker and chewier. Like Indian naan, it contains yogurt and is also baked in a tandoor oven. It’s aromatic and soft and soooo good!)

Anyway, because I like to eat low carb as much as possible, I usually opted for the eggplant. It wasn’t even a hard choice, given how delicious Afghan eggplant is!

I asked the owner for the recipe, but he told me that he buys it pre-made every day from an old woman from Afghanistan. With a shrug and a smile, he said “she just calls it eggplant”.

Then he looked pensive and said “I know there’s olive oil in it too!” I laughed and thanked him, because yes, it was quite apparent that there was a good deal of olive oil in it.

That left me with a mission to come with the recipe!

You can find this recipe transliterated as Borani Banjan or Bourani Banjan. My version is based on a rendition I used to order from an Afghan restaurant in the DC area when I lived there. However, there are also Pakistani, Turkish, Persian, and Armenian versions of this dish.

Borani Banjan is a richly spiced stewed eggplant dish with layers of flavor that blend together well. It has just enough spice to be interesting, but it’s not spicy hot. It’s served with a garlicky yogurt on top, which adds creaminess and tangy to perfectly offset the complexity of the eggplant.

This dish makes a wonderful side dish, or you can serve it as a vegetarian light summer meal.

Sometimes I like to top it with a couple poached eggs. Served like this, it’s reminiscent of both Turkish Eggs and Shakshuka!

How to Make Borani Banjan

You can make this recipe in the oven or using an electric pressure cooker to simplify the process.

No matter what cooking method you use, I recommend salting the eggplant before cooking to help reduce the bitterness that it can have.

How to Salt Eggplant

Borani Banjan in the Oven

Making this recipe is usually a multi-step process:

The end result is a flavorful stewed eggplant dish that’s much more delicious than the sum of its parts.

However, I have an easier way to make Afghan Eggplant – in an electric pressure cooker! And best of all, it doesn’t sacrifice the flavor.

I like to use an electric pressure cooker to make Borani Banjan. It speeds up and also simplifies the process.

And bonus, the only dish that you’ll need to clean is the inside of the Instant Pot!

How to Store Borani Banjan

Store this recipe in an airtight food storage container in the fridge for up to 5 days or in the freezer for up to 6 months.

Store the eggplant separate from the garlicky yogurt, and wait to add the yogurt until right before serving. 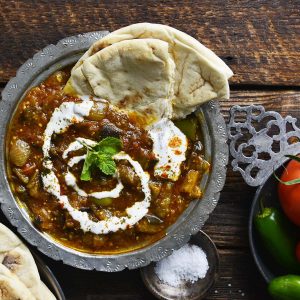 For the Garlicky Yogurt: