Creamy with a complex smoky, garlicky, lemony, slightly nutty flavor, this Baba Ganoush (roasted eggplant dip) recipe will blow your mind. I learned how to make this dip in Syria and it’s been one of my favorite easy appetizers ever since!

I remember my first bite. Carefully, I ripped off a small piece of Arabic flatbread, shaped it into a little scoop, and dipped into the creamy dip decorated with glistening swirls of golden olive oil and flecks of bright green parsley.

Everyone around me looked at me eagerly, smiling, and seeming to collectively hold their breath as they waited to hear my response.

“I love it!” I exclaimed with an ear-to-ear smile.

It had a rich, creamy texture with a complex nutty, slightly tangy, garlicky, smoky flavor. I was hooked, and went in for another bite.

I was sitting cross-legged on the floor in the living room in front of a few newspapers spread out onto the floor to function as a make-shift dinner table.

I was in Damascus, Syria, and I was enjoying one of my first meals there.

An alley at night inside the walled city of Old Damascus, Syria in March 2011.

Once you learn how easy it is to make roasted eggplant dip, you’ll make it all the time. It’ll be your go-to appetizer whether you’re hosting the gathering or heading someone else’s home. Baba Ganoush is perfect because it’s easy to transport and doesn’t need to be re-heated!

How to Make Baba Ganoush From Scratch

How to Store Baba Ganoush

Store this roasted eggplant dip in an airtight container in the fridge for up to 5 days. It’s even better the next day after the flavors have blended!

You can freeze Baba Ganoush for up to 3 months.

The biggest issue people have when making roasted eggplant dip is that it has the tendency to be bitter. Tahini, an integral component of this recipe, adds a slightly bitter nutty flavor and creaminess. But that’s not what typically causes overly bitter Baba Ghanoush.

If your Baba Ganoush is bitter, eggplant is usually the culprit! But not to worry, I have several tips to share.

How to help make sure your Baba Ganoush isn’t bitter:

What is the Difference Between Baba Ganoush and Moutabal?

Get ready to have your mind blown for a quick minute.

What most of us think of as Baba Ganoush is actually Moutabal!!!

More specifically, it’s Moutabal Batinjan, which simply means “eggplant dip” in Arabic. I learned this firsthand during my time spent living in Syria and Jordan. It’s funny, what most of us here in the US call Baba Ganoush is actually Mutabal!

In the Levantine area of the Middle East where this dish is from, Mutabal Batinjan refers to rich, creamy eggplant dip made with tahini and yogurt. It’s flavored with garlic and brightened with lemon and peppery olive oil. It’s typically seasoned with a hint of cumin.

Alternatively, Baba Ganoush in the Middle East is a dip made that’s actually closer to an eggplant salad.

Traditional Baba Ganoush is comprised of:

(Also, note that Moutabal, which just means “dip”, is also transliterated as Mutabal, Mutabbal, and Muttabal.)

Do You Peel Eggplant Before Roasting?

No! Whether you cook the eggplant for this recipe on a grill or in an oven, leave the peel on.

After cooking the eggplant, you can slice it open and easily scoop out the flesh.

How Long Do You Roast Eggplant for Baba Ganoush?

For this recipe, you can cook the eggplant on a grill or in an oven.

To Cook Eggplant on a Grill:

To Roast Eggplant in the Oven:

This recipe was adapted from my recipe for Mutabbal Batinjan from my Middle Eastern cookbook An Edible Mosaic. Check it out for more authentic recipes and cultural tidbits that I picked up during my time spent living in the Middle East. 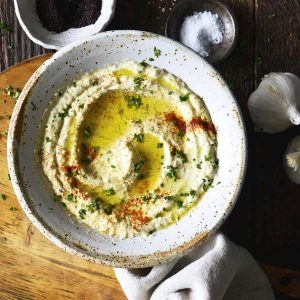 By: Faith Gorsky
Creamy with a complex smoky, garlicky, lemony, slightly nutty flavor, this Baba Ganoush recipe will blow your mind. I learned how to make this dip in Syria and it’s been one of my favorite easy appetizers ever since!
5 from 1 vote
Print Recipe Pin Recipe
Prep Time 10 mins
Cook Time 20 mins
Time for the Eggplant to Cool 20 mins
Course Appetizer
Cuisine Middle Eastern
Servings 6 servings
Calories 189 kcal