This hearty Colcannon recipe for Irish Mashed Potatoes with Cabbage combines rich, buttery mashed potatoes and cabbage sautéed with onion for a side dish that’s satisfying, nutritious, and delicious. 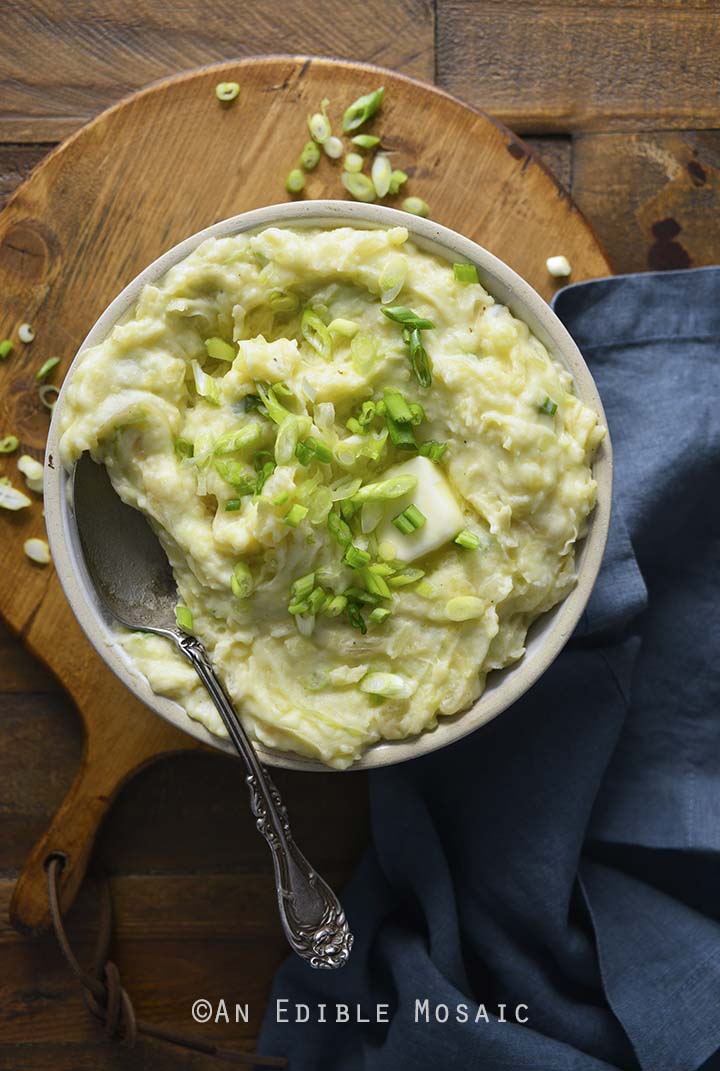 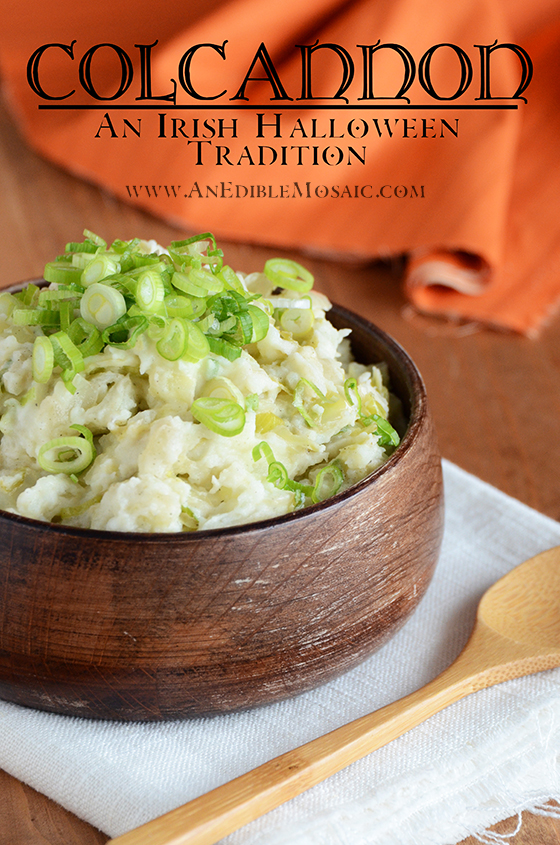 Halloween isn’t my favorite holiday. I kind-of see it as a non-holiday holiday that must be endured before the real holiday season can be ushered in (and for this I apologize to my darling Halloween-loving readers!).

But I will admit there are some fun things about it. Costumes, for example. And jack-o-lanterns. Scary movie marathons. And if you’re still young enough to do so, trick-or-treating is always a blast (who would refuse free candy, right?). These are the traditions that I grew up associating with Halloween.

I think it’s interesting to see how people in other parts of the world celebrate the same holiday, which is why I was intrigued when I recently found a recipe for Colcannon, a traditional Irish Halloween dish, in a cookbook called Irish Pub Cooking. This recipe is loosely based on the recipe from that cookbook.

And even though this side dish is traditional for Halloween, it’s delicious enough to enjoy anytime! Pair it with roast chicken, pot roast, grilled meat, or a rich, hearty stew. 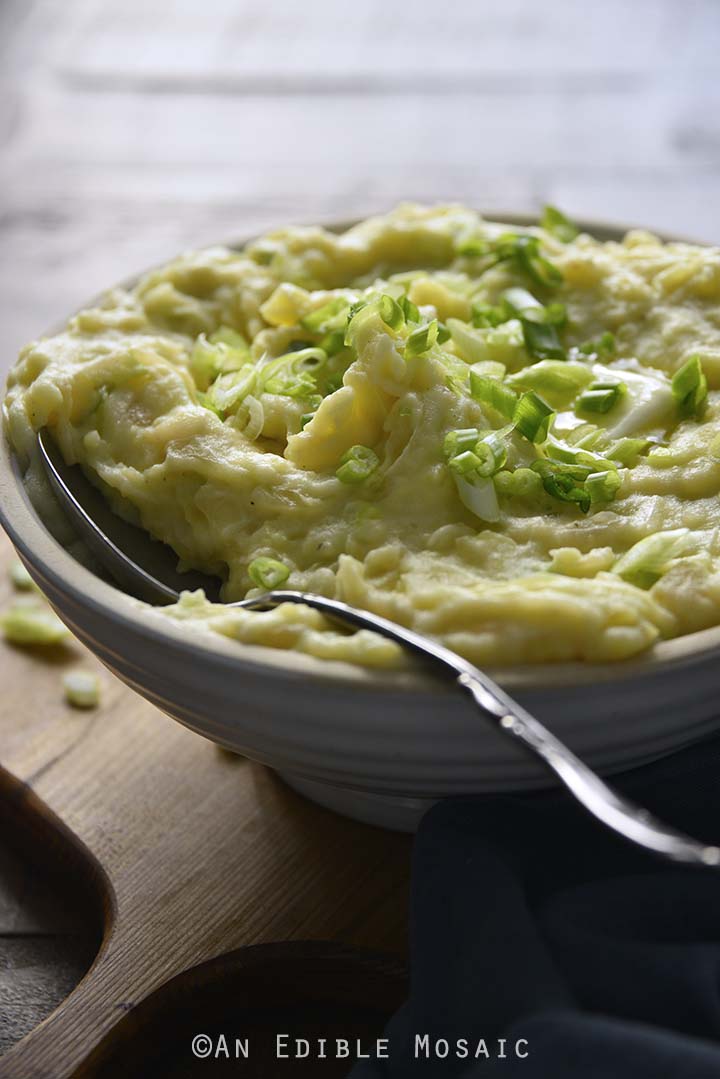 The Tradition Behind Colcannon

Years ago in Ireland (or perhaps it’s still done to this day?), it was traditional to serve Colcannon for Halloween and hide coins or small charms in it.

I’ve also heard tales of Colcannon pertaining to marriage. Legend has it that an unmarried woman would put Colcannon into a stocking and hang the stocking on the door. Apparently the next unwitting chap to come through the door was her future husband!  You can read more about Irish Halloween traditions and recipes on IrishCentral. 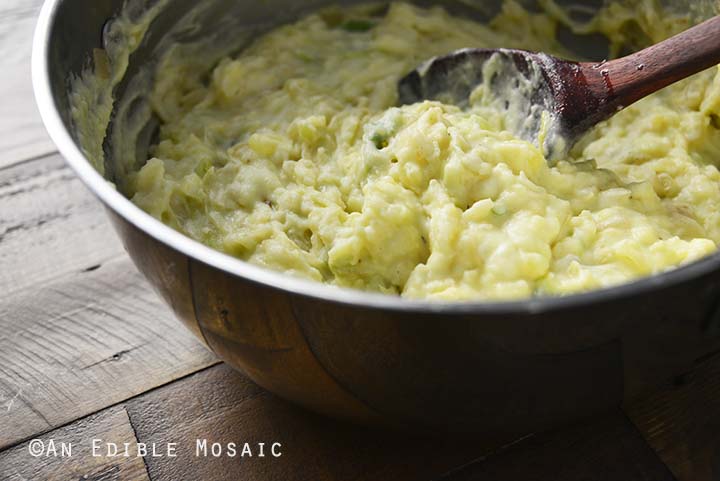 I made this lovely dish for dinner with my parents’ a couple weekends ago, and served it with a fantastic Basic Beef Stew Using Pantry Staples. In keeping with tradition, I was tempted to put (thoroughly scrubbed) pennies in it! However, I feared my mom would see even scrubbed pennies as unclean (and no, I definitely do not blame her for that, lol!).

Coins present or not, this is comfort food at its finest. 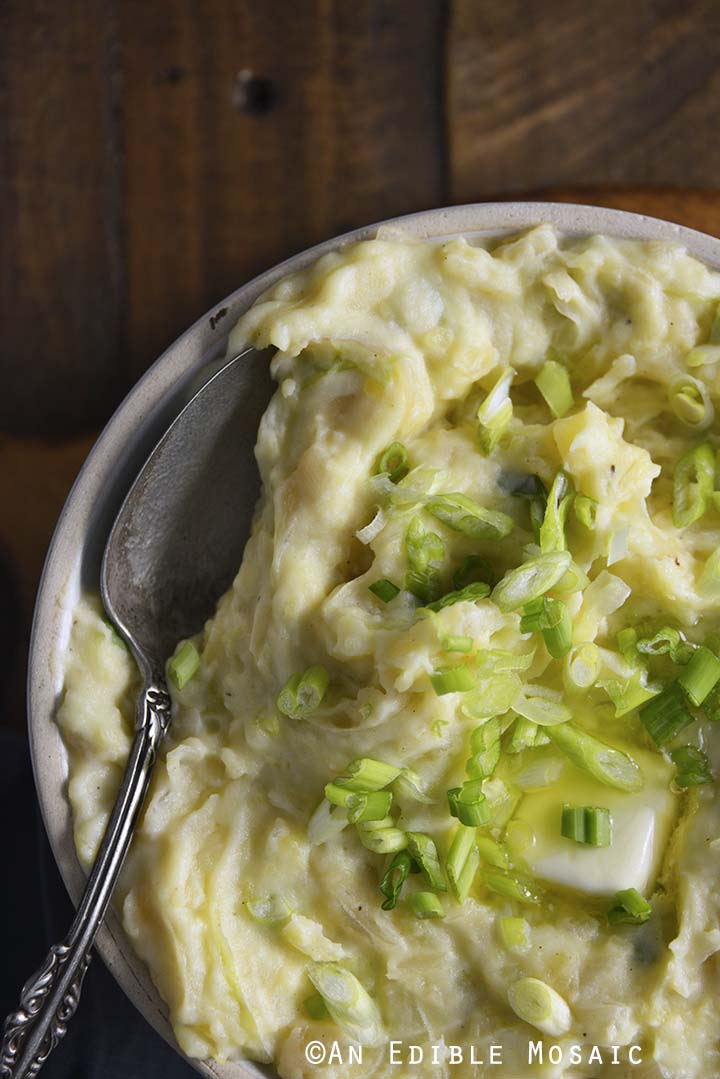 Colcannon is a rustic mashed potatoes dish with cabbage or kale. It frequently has some kind of onion as well.

The original recipe I found called for scallion, but that just wasn’t enough onion for me! I added a regular cooking onion as well. However, the book said you could substitute leeks if you prefer, so I’m guessing just about any kind of onion will do.

Colcannon has a somewhat obscene amount of butter and half and half, as do so many recipes for mashed potatoes. But in my humble opinion, this tastes so much better than most mashed potato dishes out there, and at least it comes with the added nutrition of cabbage and onion. 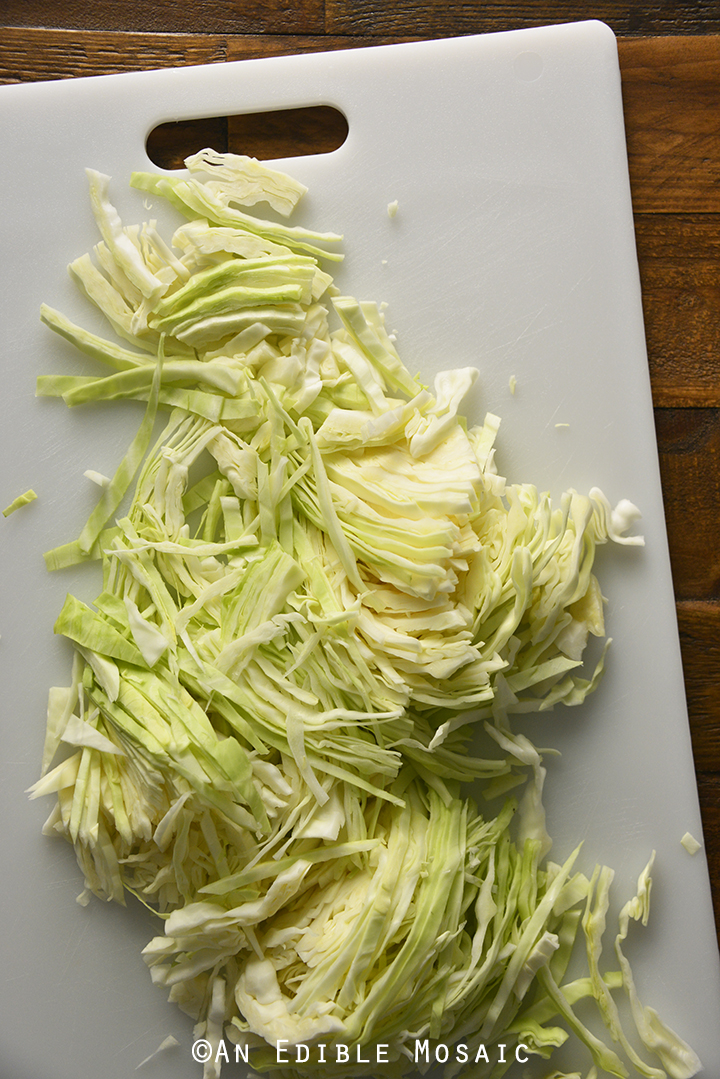 And it’s no small amount of cabbage! If you think cabbage isn’t your thing, I highly recommend this recipe. Paired with butter and potatoes, you might find that you love cabbage! 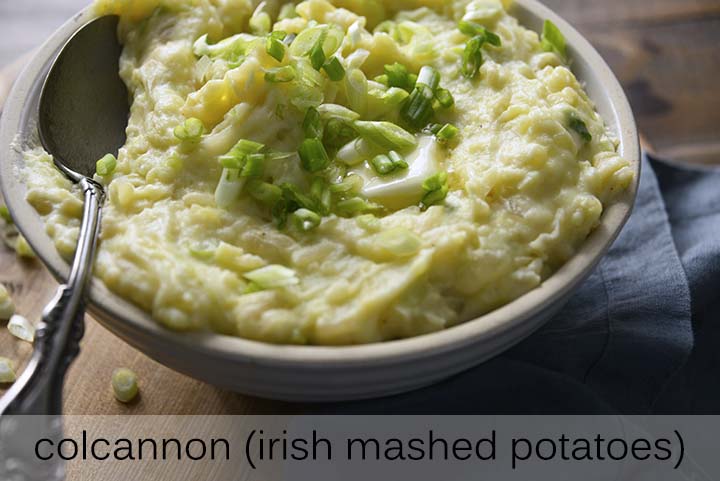 Colcannon is delicious, and also loaded with vegetables! If you’re trying to eat more real foods, this side dish is a good choice.

And this recipe is easy to make for all skill levels! 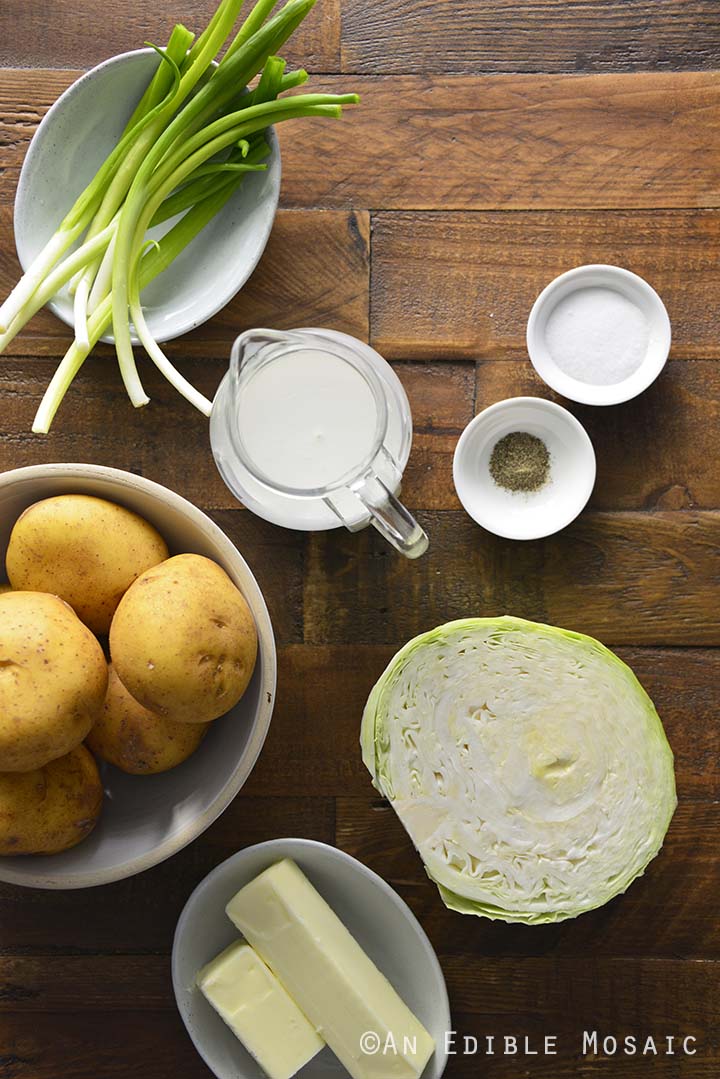 How to Make Colcannon 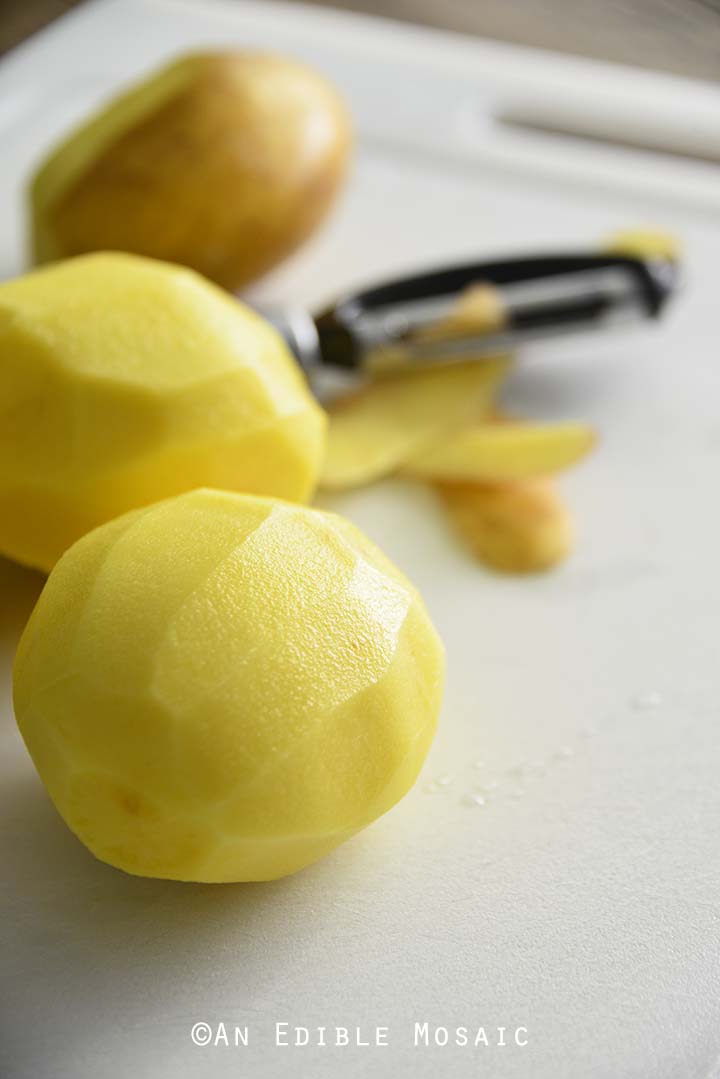 Put the potatoes into a pot and cover them with cold water by about 2 inches. 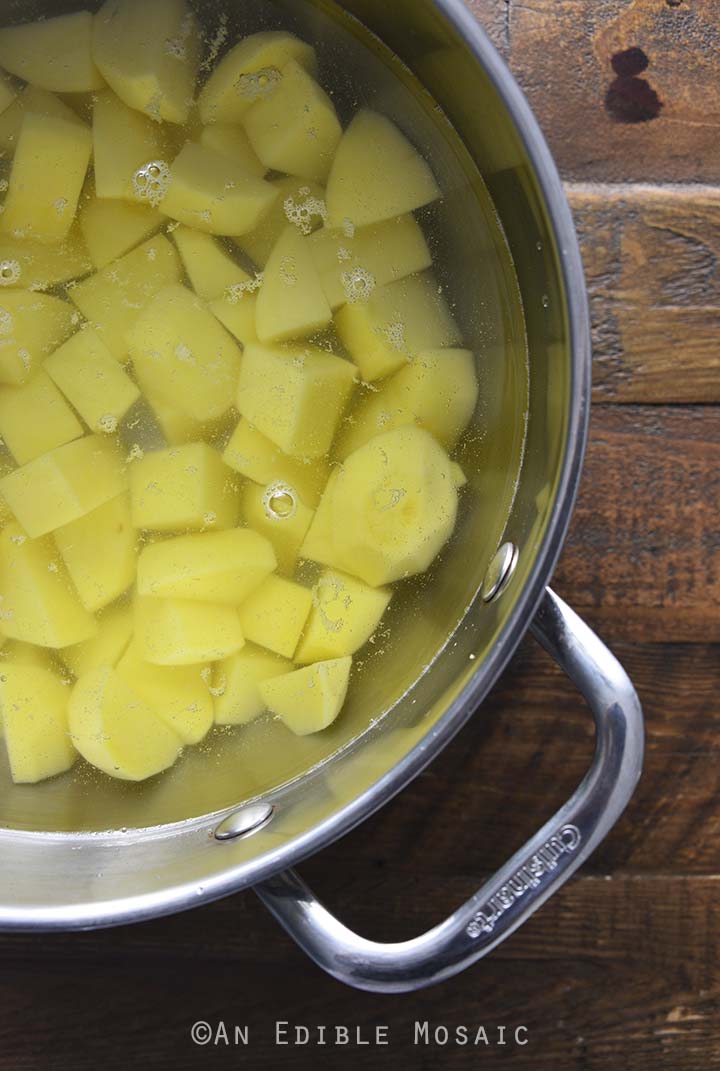 Bring them to a boil, cook until tender, drain well, and put them back into the pot they cooked in. Add the butter and salt, and give the potatoes a good mash. 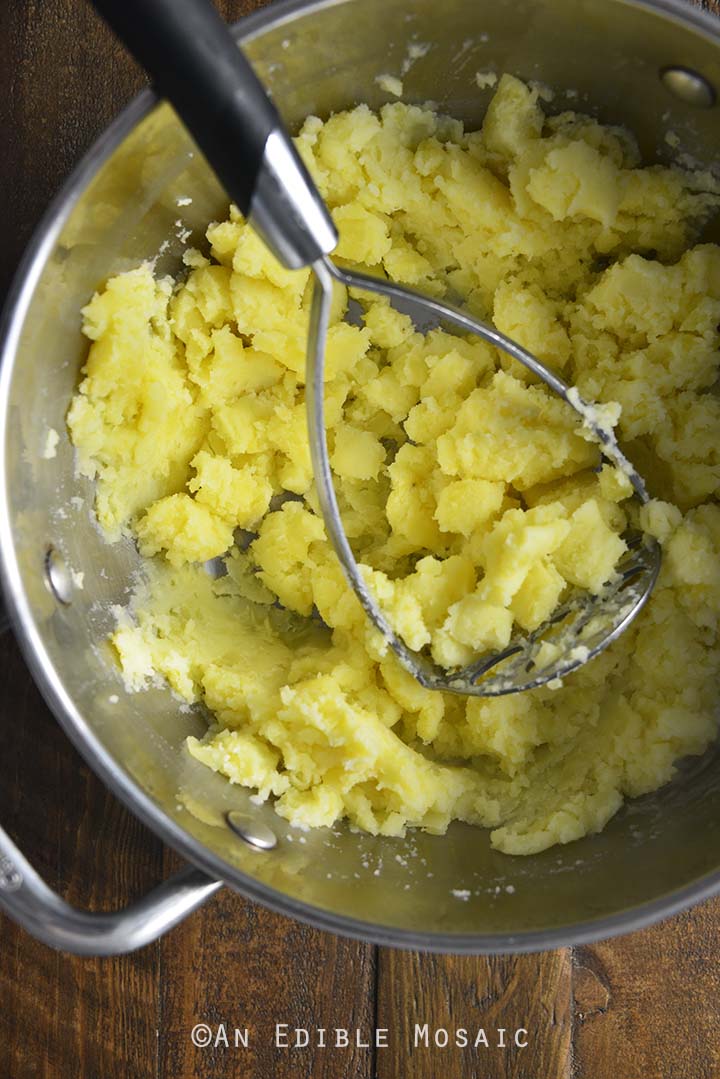 Add the half and half a little at at time, mashing between additions. By adding it a little at a time, it ensures that the potatoes absorb all the liquid. 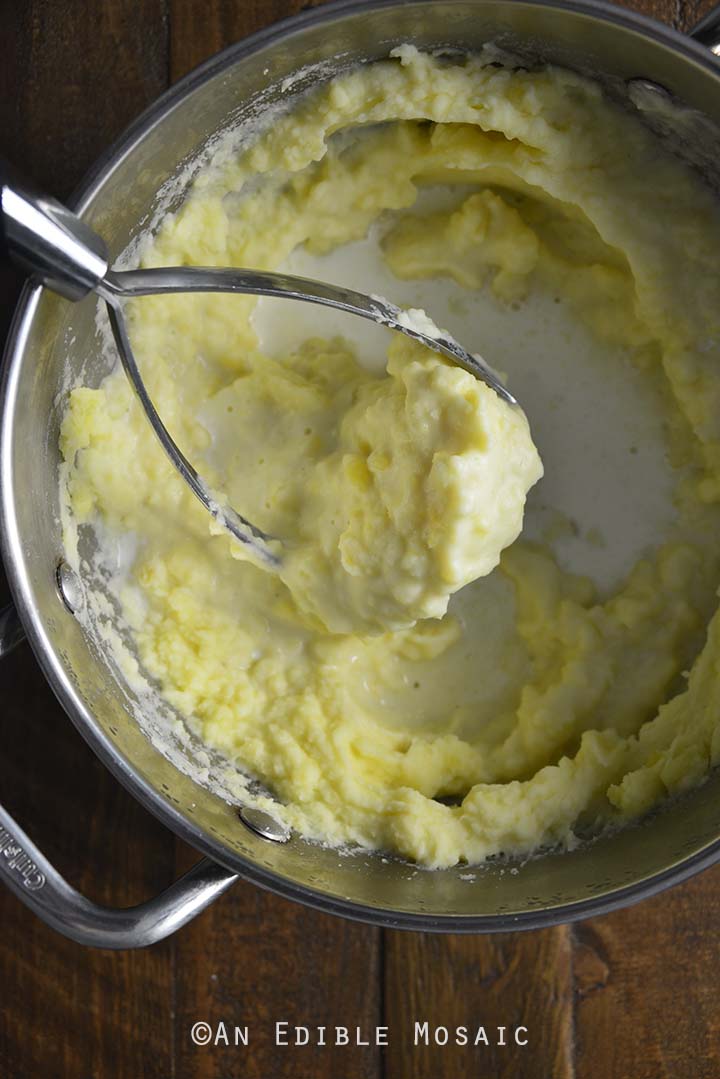 Just look at how rich and creamy these mashed potatoes are! 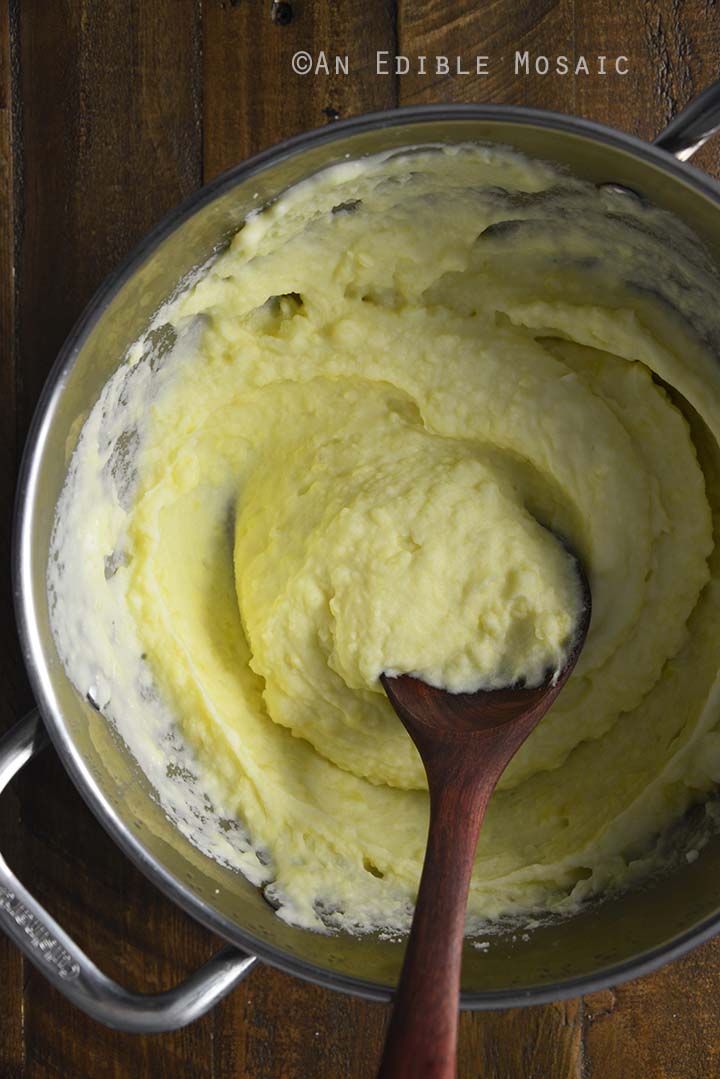 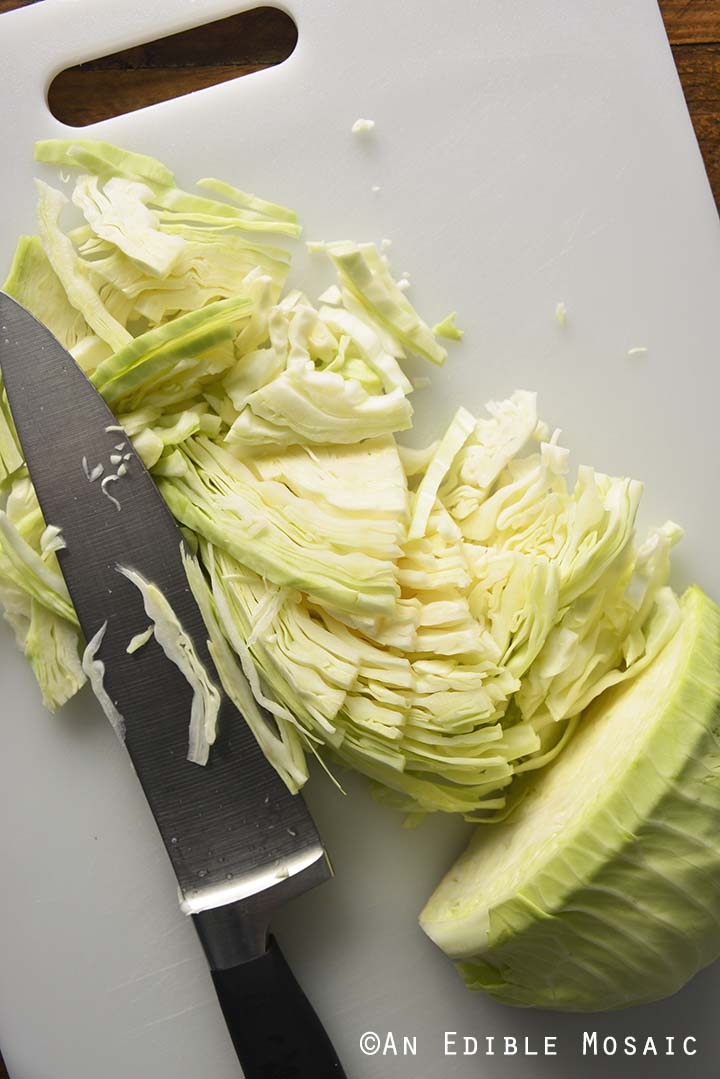 Peel and chop an onion. I love the savory flavor it adds here. 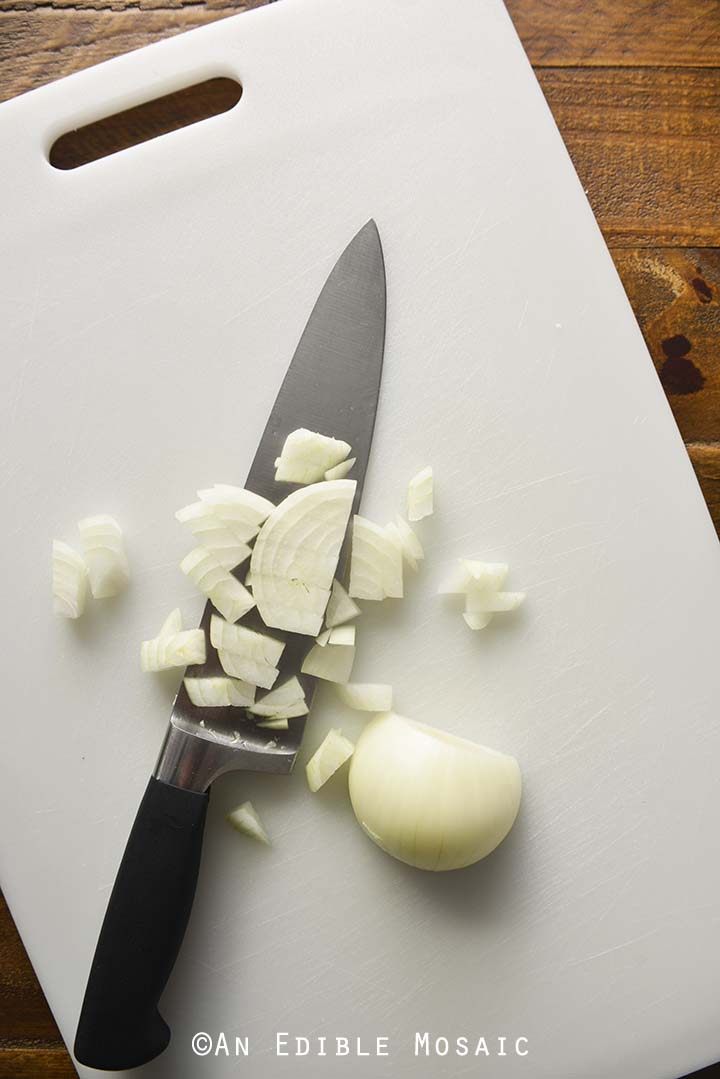 Thinly slice a few scallions. Don’t skimp out on the scallion! They bump up the freshness and add a subtle burst of savory flavor. 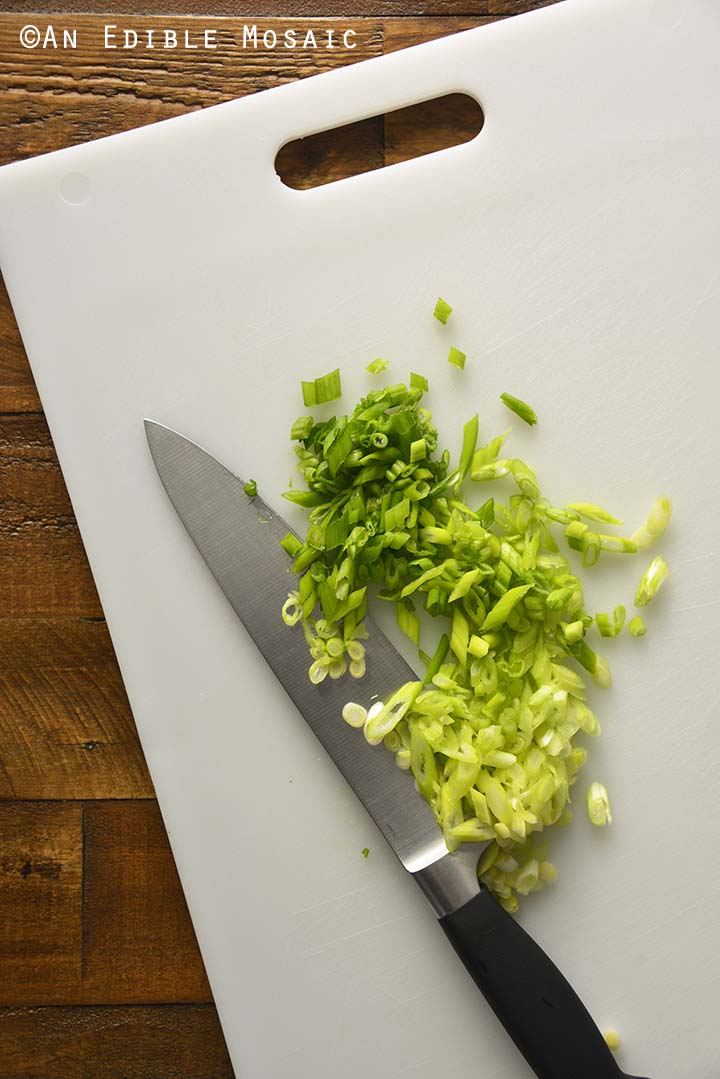 Sauté the cabbage and onion in butter with salt and black pepper until it’s tender, and then stir in half of the sliced scallion.

If you think cabbage isn’t your thing, taste it at this point! It will have a rich, buttery flavor with a hint of savoriness and should be tender enough to almost melt in your mouth, but with just a little touch of al dente texture. Careful, you’re about to become a cabbage lover. 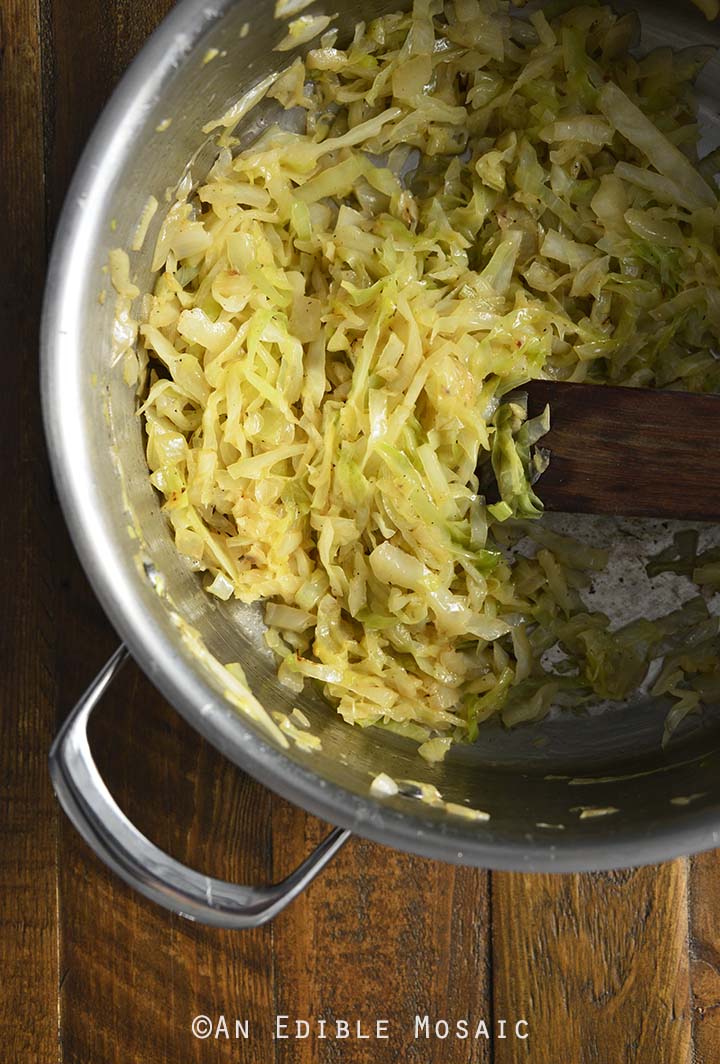 Add the cabbage mixture to the mashed potatoes. 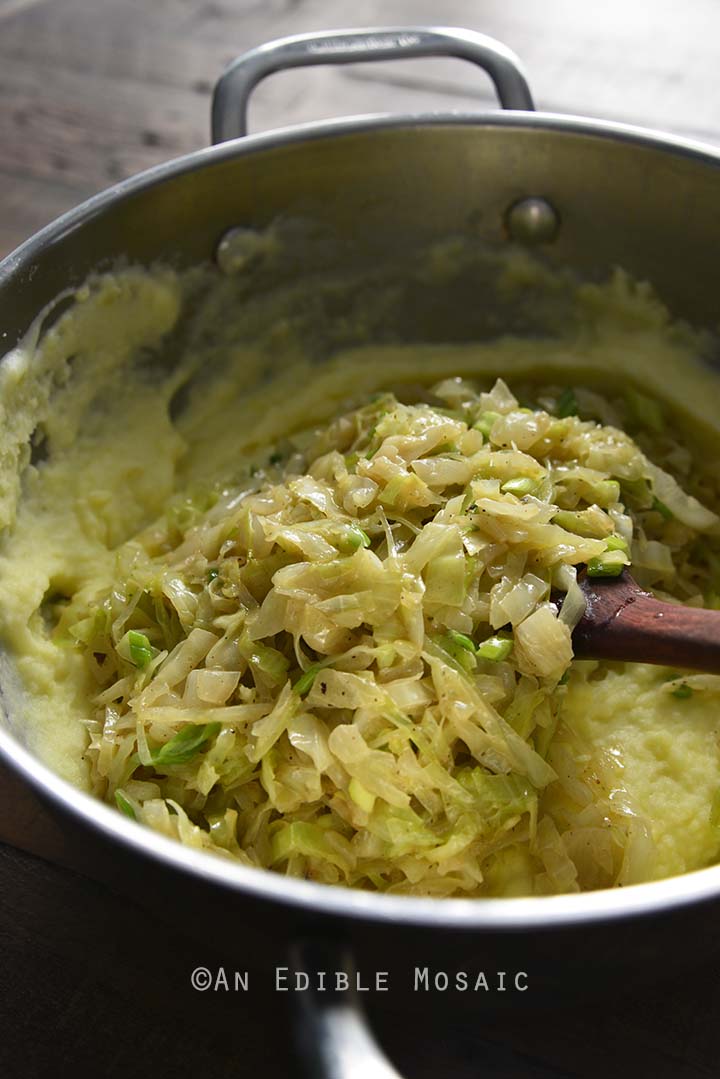 Give it a good stir to combine. 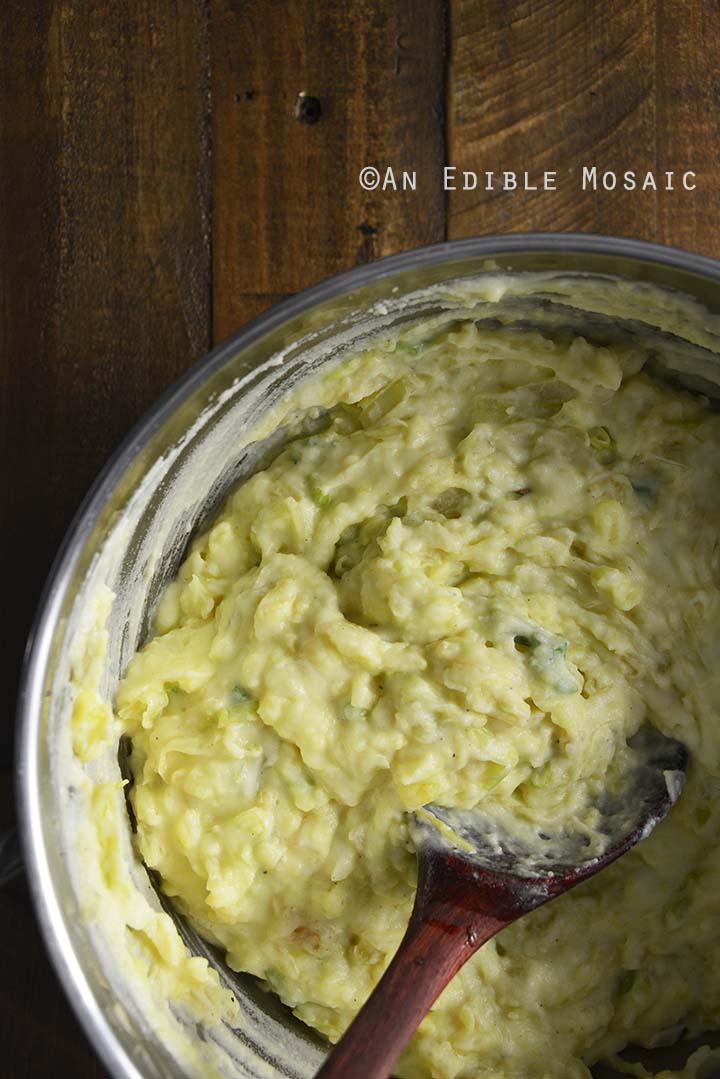 Transfer the Colcannon to a serving bowl. Top with a little more butter and a little more scallion, because why not?! Serve it up, and revel in the fact that you have unlocked the secret to the world’s best mashed potatoes. 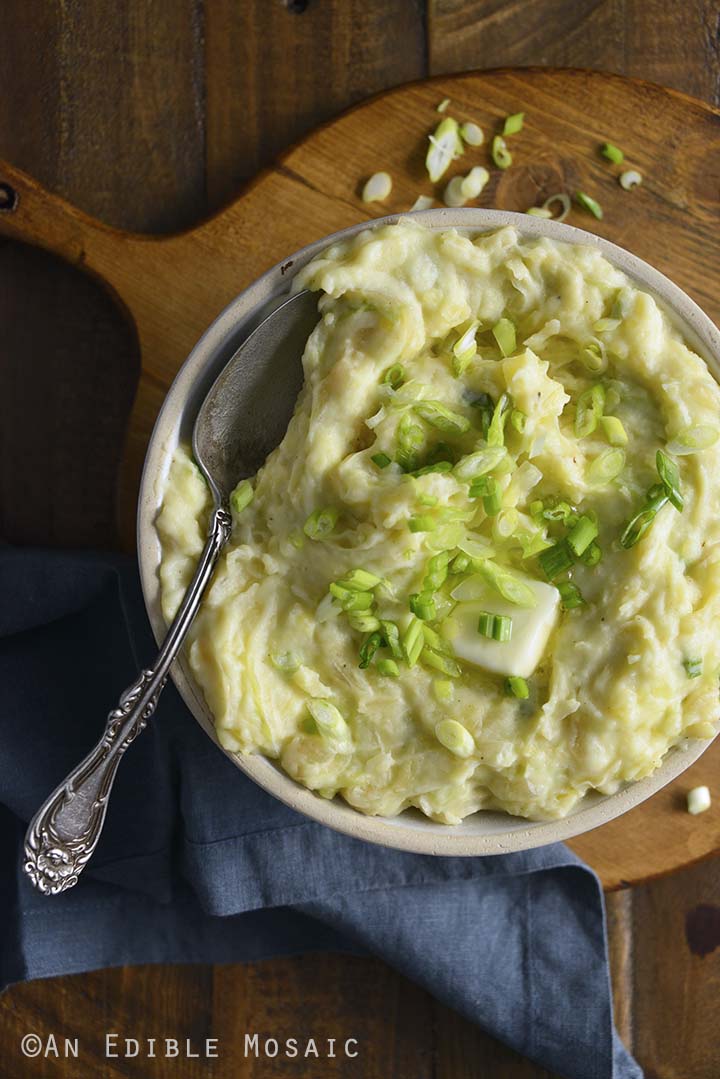 What Type of Potatoes Should I Use For Mashing?

To make mashed potatoes, I like to use either Russet potatoes or Yukon Gold potatoes.

Russets yield a light and fluffy mash with a creamy white color. Yukon Golds result in a rich and dense mash with a buttery yellow color.

I used Yukon Gold potatoes to make this Colcannon recipe, but you can use whatever you prefer.

What is the Difference Between Champ and Colcannon?

Both Champ and Colcannon are mashed potato-based dishes. However, the main difference lies in the additional ingredients.

Champ is mashed potatoes with scallion.

Colcannon is mashed potatoes with cabbage or kale.

I’ve also found that Champ is mashed to a much smoother consistency than Colcannon, which is commonly somewhat of a rough mash. 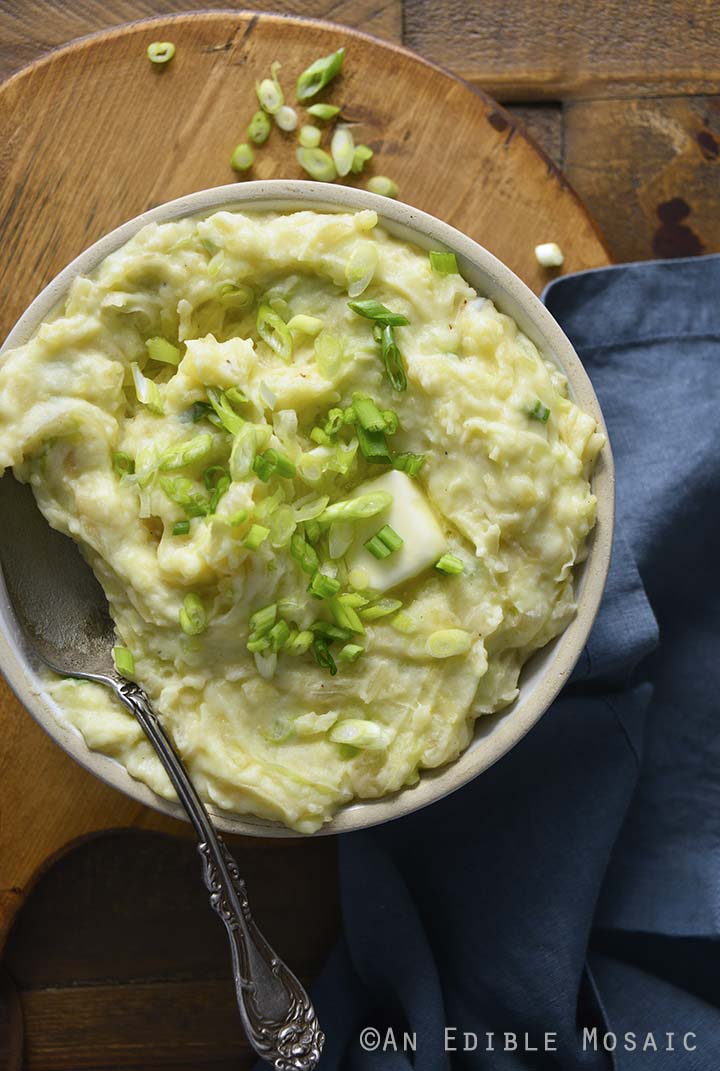 What to Serve with Colcannon

If you’re wondering what to eat this Colcannon recipe with, know that it’s delicious with anything you’d eat mashed potatoes with! Here are a few ideas:

More Delicious Recipes with Some Form of Potatoes: 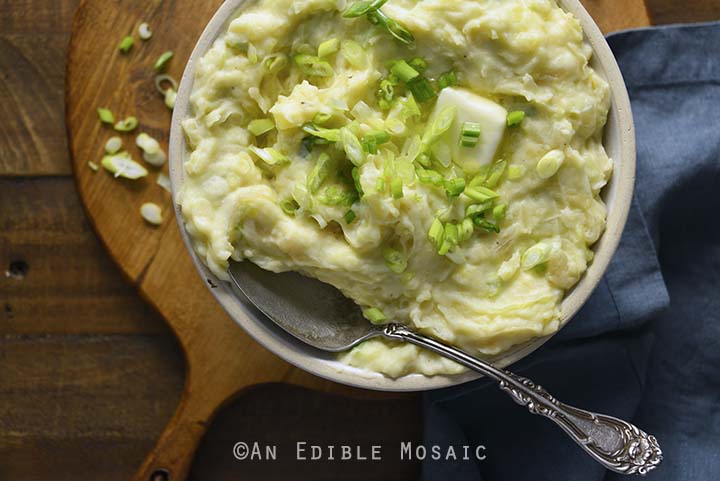 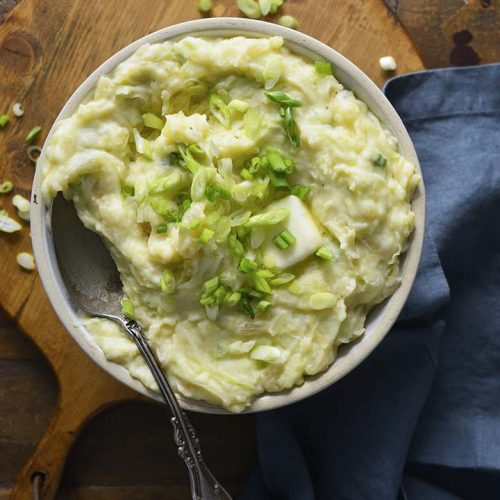 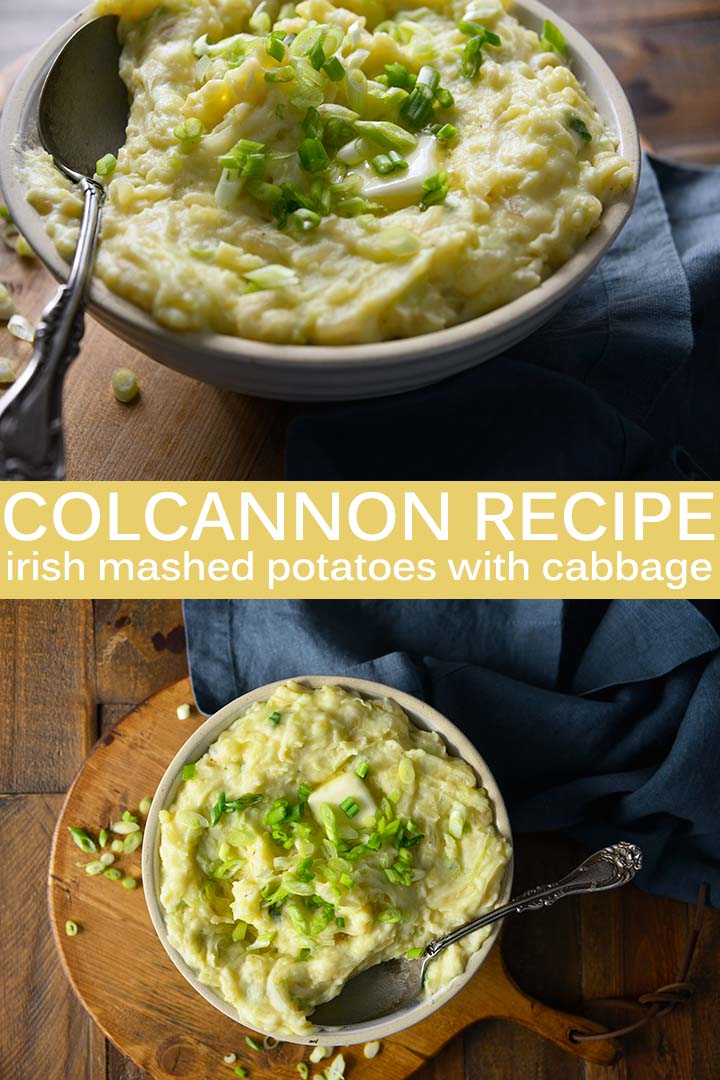