Gluten-Free Cream of Celery Soup celebrates the simple flavor of celery, which is surprisingly sweet, in this rich, velvety soup. 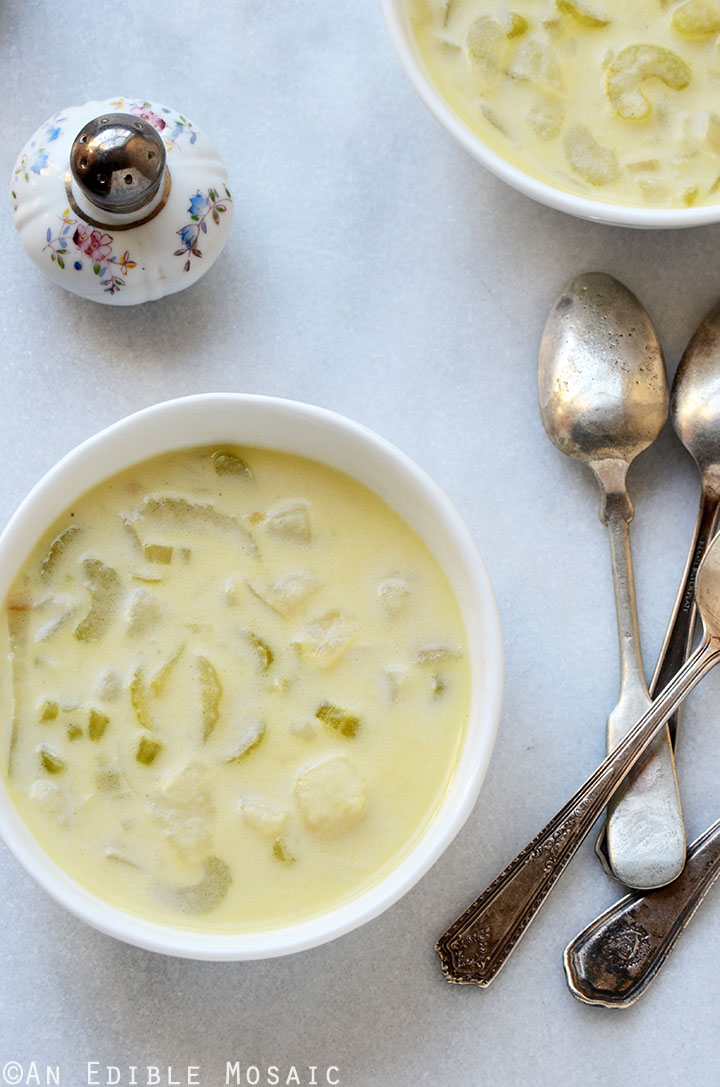 Pouring through old cookbooks with a cup of something hot in hand is one of my favorite ways to spend an afternoon. I’m always surprised that cookbooks go so far beyond just teaching us how to cook and what to eat; they’re full of knowledge about history and especially culture.

Growing up, my mom had a tattered old vintage Betty Crocker cookbook. It was bright orange on the front with a collage of very 1980’s-esque photos, its insides torn and splattered. Many pages were dog-eared and recipes marked up and amended with hand-written notes jotted down in the margin. I adored that cookbook. Every time my mom pulled it out, we knew something delicious would ensue. I found my own copy of that cookbook on eBay a while ago and every so often when I’m feeling nostalgic, I’ll look through it. 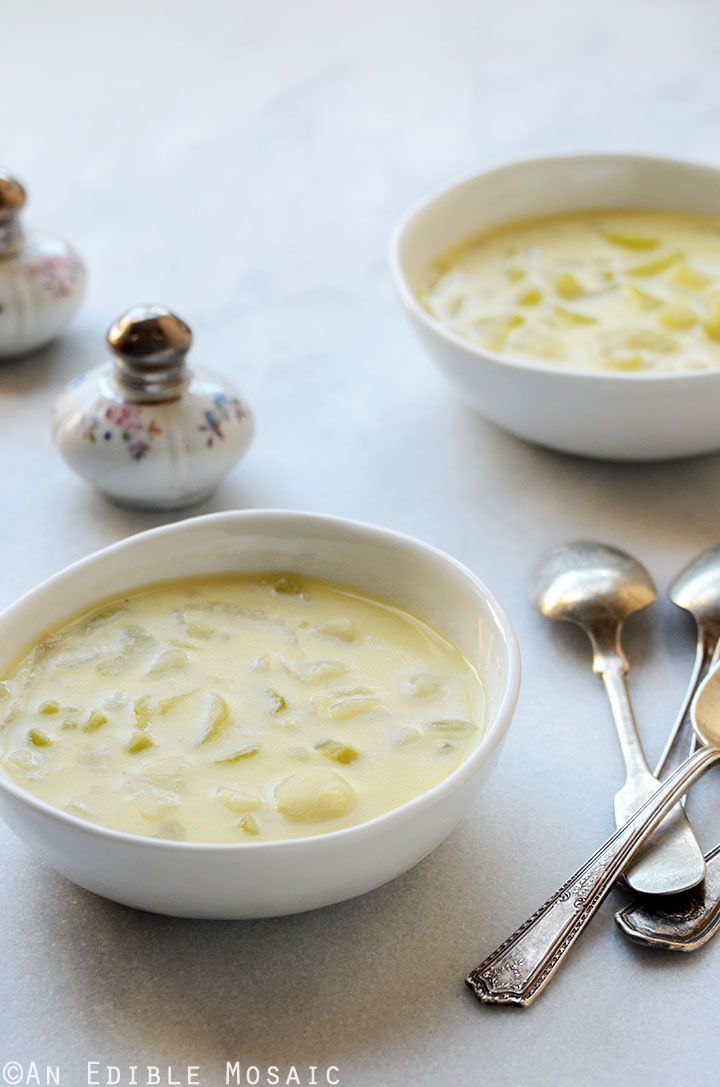 This soup comes from quite a different cookbook though. When my niece lived in D.C., she and I would head to Barnes & Noble every Friday night for a little girls’ time. We’d sip lattes and nibble cookies and gossip, perusing books from various topics that interested us. Mostly fashion and beauty with a bit of mythology mixed in for her, and nearly always cooking-related, but sometimes fantasy or historical fiction for me.

On one particular evening, the place was pretty full and I was in a hurry to grab a book and find a table. The title of Real Irish Food by David Bowers stood out, as I love the simplicity and hearty, home-style comfort food-type dishes that are the heart of Irish cuisine. I ended up being so smitten with the book that I bought it, and the first recipe to inspire me was David’s Celery Soup. 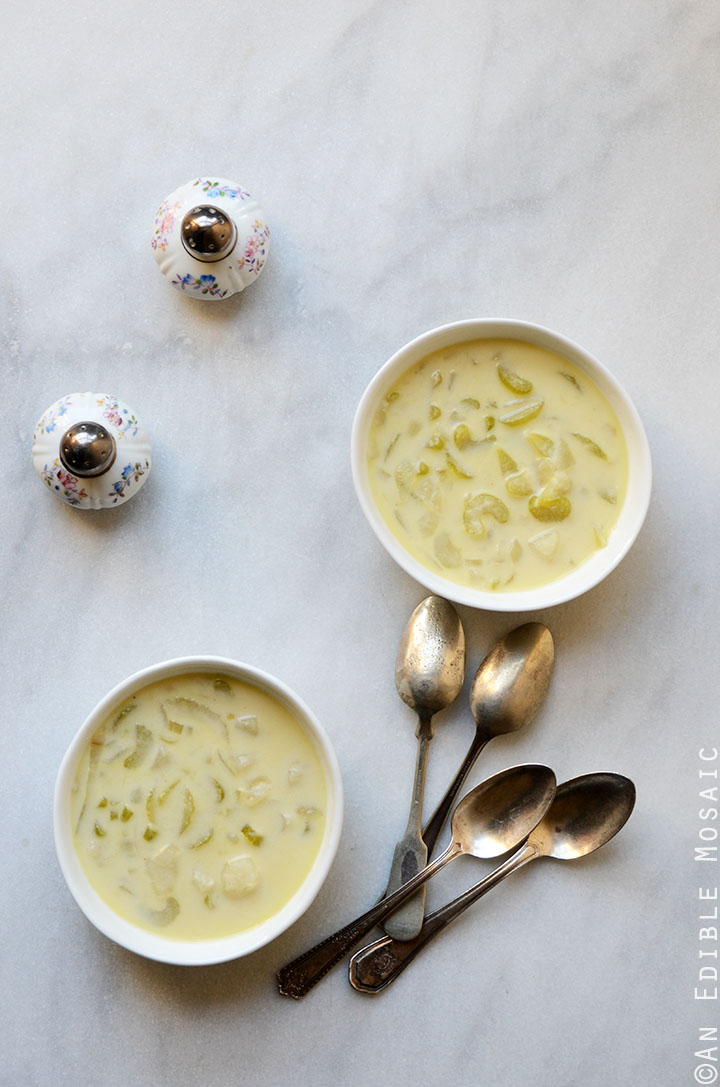 Ironically, I renamed my version to Cream of Celery Soup because of its lusciously creamy texture, but David’s soup (which he just calls Celery Soup) uses light cream and mine doesn’t! I find that butter and whole milk along with potato give this soup a very rich texture and flavor without the need for cream, but by all means, add it in if that’s your preference. Don’t skip the nutmeg here; on the contrary, bump it up to 1/8 teaspoon or so if you like. It adds that little je ne sais quoi. Another thing to mention, David’s version doesn’t call for garlic, but I love just a hint of it here (and yes, I consider two to three cloves to be just a hint, lol) to add to the complexity of the dish (and it pairs so well with potato).

This whips up in just 30 minutes and makes a nice light meal (as in, not heavy meal…not “lite” calorie-wise) or starter course for a winter dinner. 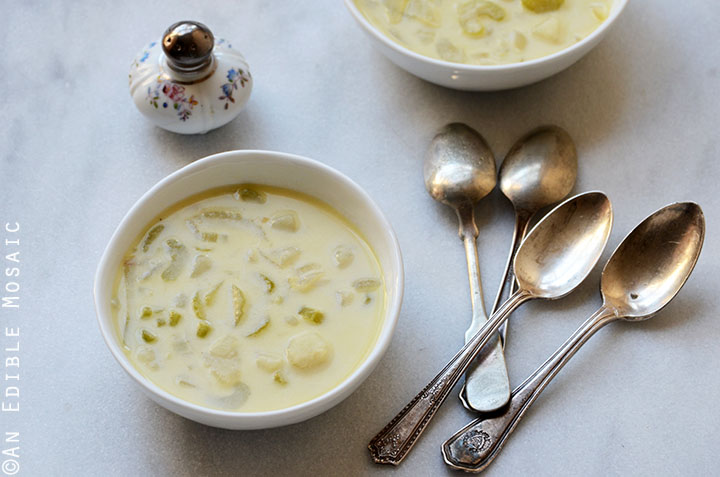 Print
Cream of Celery Soup {Gluten-Free}
Prep time:  10 mins
Cook time:  20 mins
Total time:  30 mins
Yield: 2 servings as a light meal, or 4 to 6 servings as a starter
Gluten-Free Cream of Celery Soup celebrates the simple flavor of celery, which is surprisingly sweet, in this rich, velvety soup.
Ingredients
Instructions
Notes
Recipe inspired by and adapted from David Bowers' recipe for Celery Soup in Real Irish Food.
3.3.3070
Disclosure: This post contains Amazon affiliate links to products I believe in, which means that even though it doesn’t cost you anything extra, I will receive a small amount of money from the sale of these items, which helps me keep this site alive – thank you for helping to support An Edible Mosaic!