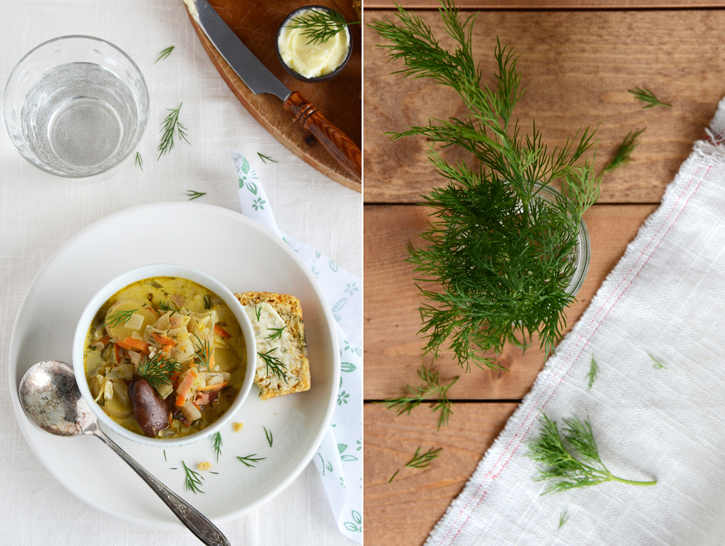 I just realized how pretty fresh dill is.  :)

I know we’re getting to the tail end of soup season (in the Northern Hemisphere, anyway), but I just had to share this one.  I made it a couple months ago when I made my first beer bread (Cheddar-Dill Beer Bread) and it was an instant favorite in my house.  (We love creamy soups, especially ones with cabbage…this soup and my Cabbage, White Bean, & Sausage Soup are proof of that.)

But to honest, we’ve still been getting “soup days” around here, weather-wise.  Last week we had a few days of high temps in the 40s and this weekend we’re supposedly in for more of the same.  (The crazy thing is, today’s high is supposed to be in the 70s…such a roller coaster!)  So, for anyone who lives in a place like I do where the weather can (and does) turn on a dime, make this soup this weekend!  :) 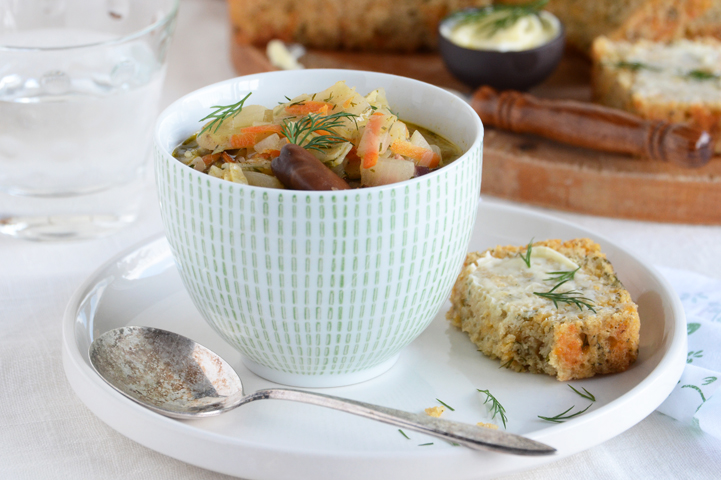 A Note on Fava Beans:  I used dried favas in this soup since fresh favas weren’t in season when I made it.  It’s still a little early for fava bean season (depending on where you live), as they’re typically available from late spring through mid to late-summer.  However, if you can find fresh fava beans, by all means, try them in this soup!  (Once the beans are prepped, maybe add them during the last couple minutes so they don’t fall apart.)  Just an FYI on prepping fresh fava beans:  they first have to be shelled (the same way you would shell peas), and then blanched so you can remove their tough outer skin.  Once you do that they’re soft and tender with an almost buttery texture.  (For more information, including two recipes using fresh fava beans, check out my guest post on fresh fava beans on Lazaro Cooks.) 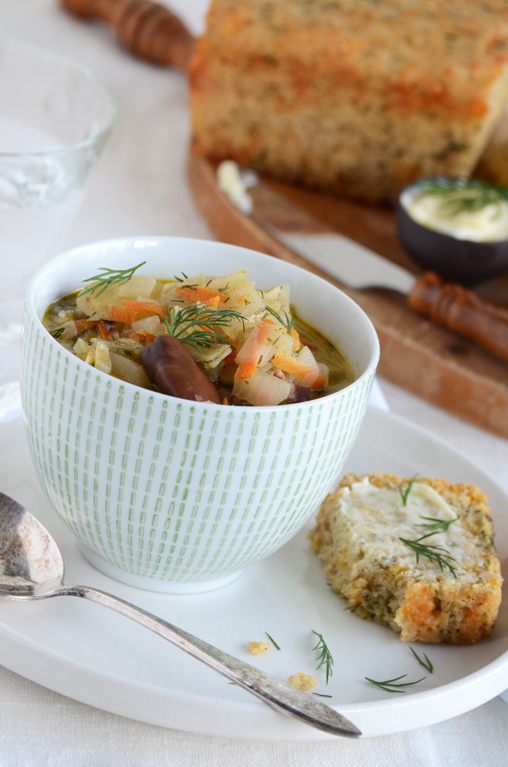 Pick over the beans and remove any stones, pieces of dirt, or irregular beans.  Put them in a large bowl; fill the bowl with cold water and soak overnight.  The next day, drain the beans, add them to a large pot, fill the pot with water, and bring to a boil over high heat; once boiling, turn the heat down, cover the pot, and cook until the beans are tender (about 2 to 3 hours), adding more water as necessary and stirring occasionally; drain.

Heat the oil in a lidded 5-quart pot over medium heat; add the bacon and cook until browned, about 3 to 5 minutes.  Transfer the bacon to a bowl and set aside.  Turn heat up to medium-high and add the butter to the pot; once melted add the cabbage, onion, lemon juice, salt, and pepper.  Cover and cook until the veggies start to soften, about 10 minutes, stirring occasionally.  Add the garlic and red pepper flakes and cook 2 minutes, stirring constantly.

Add the carrot, potato, marjoram, bay leaves, bouillon cubes, water, beans, and turkey bacon; turn heat up to high, cover the pot, bring the soup up to a boil, then turn heat down to simmer and cook until the veggies are tender, about 20 minutes, stirring occasionally.  Turn off heat and stir in cream and dill; season with additional salt and pepper to taste.  Serve garnished with fresh dill if desired.