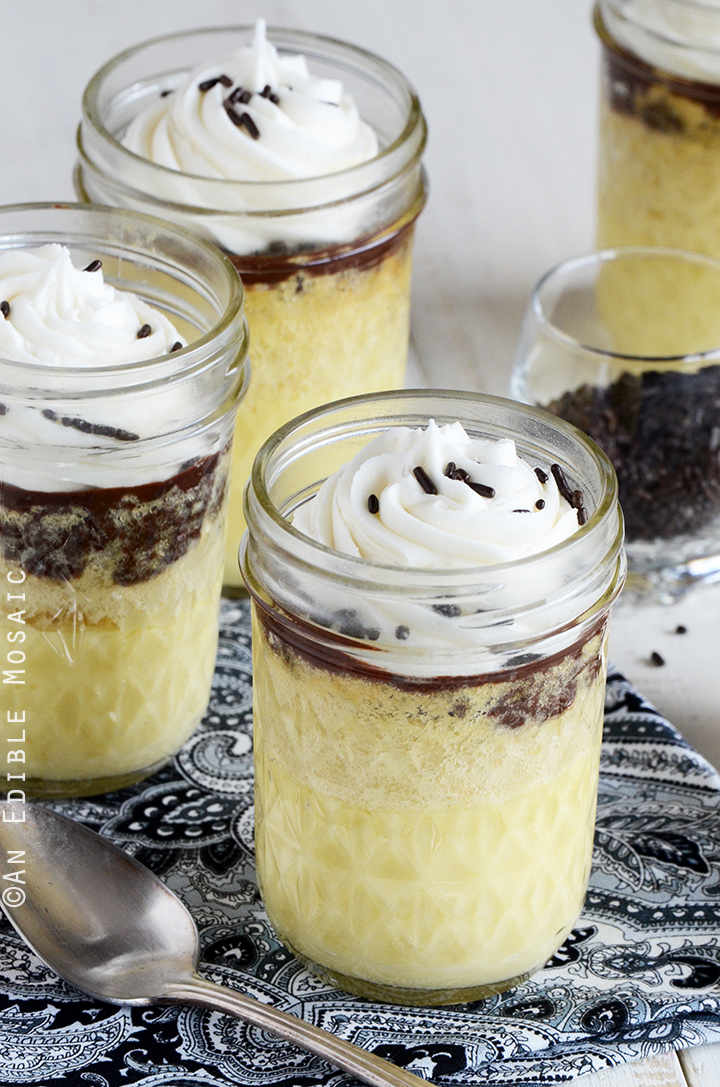 For Christmas Eve dessert my brother asked for something called Christmas Custard Pie. No one else in the family had ever heard of it before (including me) and he had no explanation for it other than the obvious (custard and pie, lol!). When asked where he heard of it, he was strangely cryptic and didn’t really say; in an effort to find out more about it, I looked it up online and even though I found a few different recipes, nothing really stuck out as a must-try. But by that point I was definitely in the mood for custard so I decided to go with a custard-y “pie” of a different kind: Boston Cream Pie! 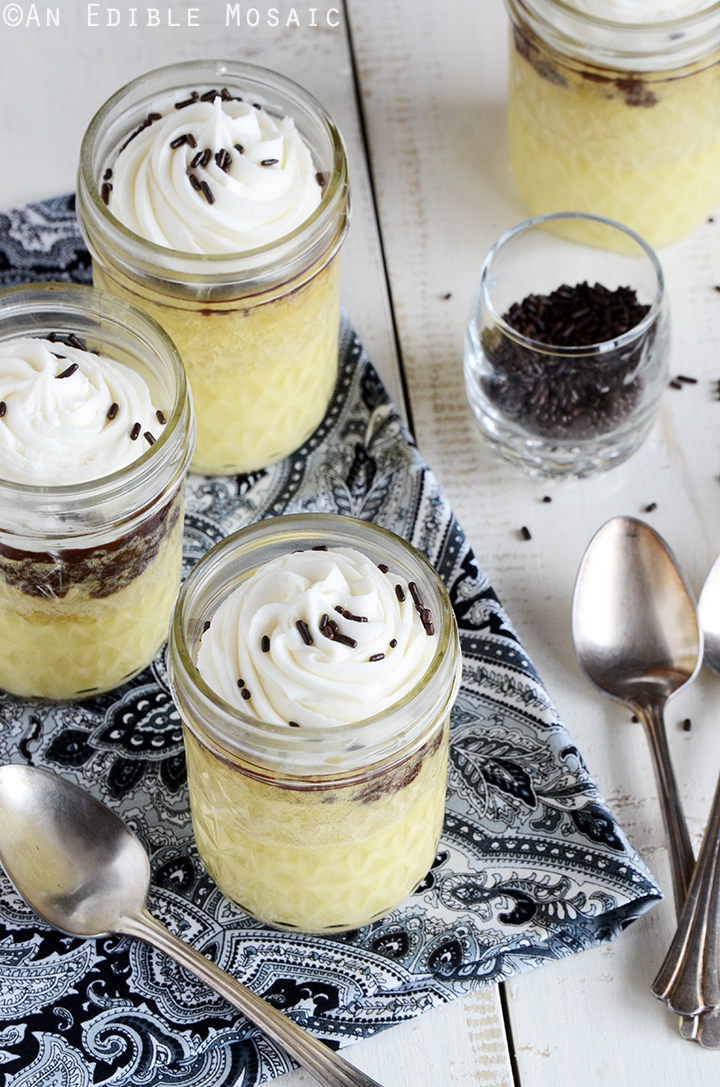 Boston Cream Pie is actually cake; a yellow layer cake filled with either custard or pastry cream and topped with ganache. I wanted to make my own version of this classic in jars. (I’m not really sure why, it just seemed like a good idea at the time.) Sounds easy enough, and had I just made cupcakes, sliced them in half, and assembled the Boston Cream Pies in the jars it would have been. But I wanted to bake the custard and cake batter together in the jars so that the only assembly required once they were baked was the addition of ganache on top.

So I set out thinking about how to make it work. (I even called my blogging buddy Brandy for some help – thanks for brainstorming with me, Brandy!) At first I was going to try to bake a layer of custard between two layers of cake; the bottom layer of cake would have to be thick (almost like a muffin batter) so that the custard wouldn’t sink into it, but the top layer of cake (that rests on the layer of custard) would have to be light and spongy so it wouldn’t sink into the custard. I think it would have worked pretty well in the end, but it sounds a little complicated, right? (I don’t want my recipes to be too convoluted – I want you guys to make them!) I thought it sounded a bit too involved, so I scrapped that idea. 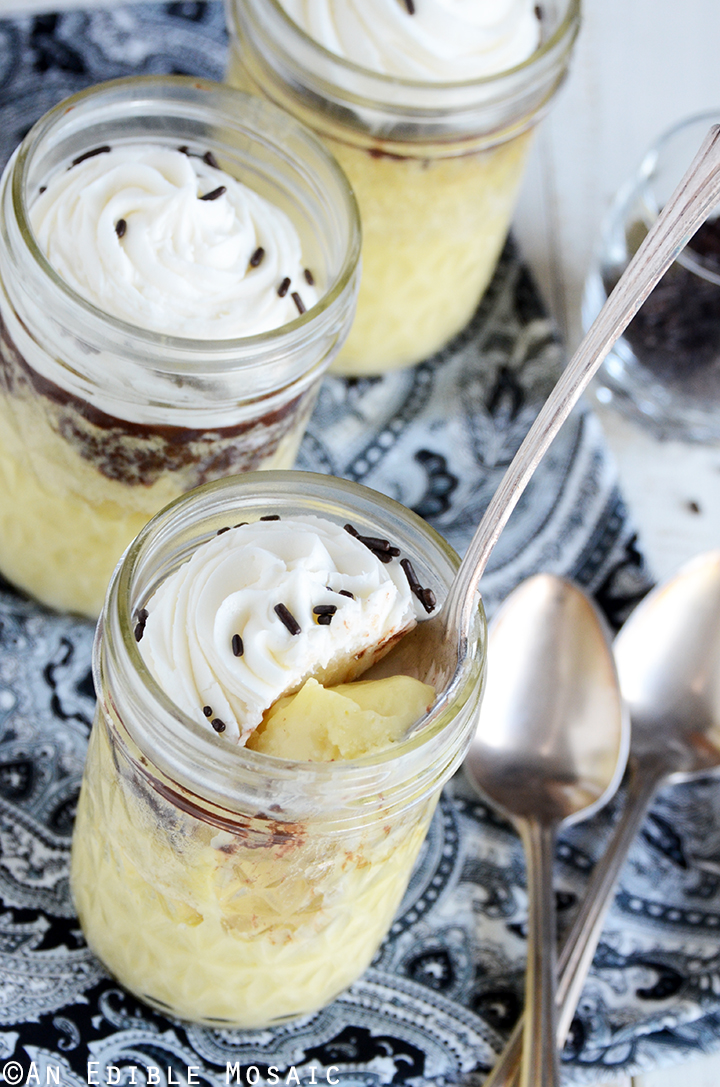 Finally, I decided to put a layer of custard on the bottom of the jar and top it with a layer of cake batter (kind-of a cross between butter cake and sponge cake so it’s still light enough not to sink), and then bake it in a water bath up to the top level of the custard so the custard is protected in the oven, but the cake batter cooks properly. It worked like a charm…two completely distinguishable layers and both incredibly tasty (and no sinking cake batter!).

Of course, it doesn’t end there though. (I made it for Christmas Eve dessert, so why not gild the lily? ;) ) Once the cakes were cooled to room temperature, I spooned dark chocolate ganache on top and let it set, and then piped white chocolate buttercream on top. Really, this is a dessert worthy of dreaming about. And replicating. There’s no way I’m waiting until next Christmas Eve to make these again. 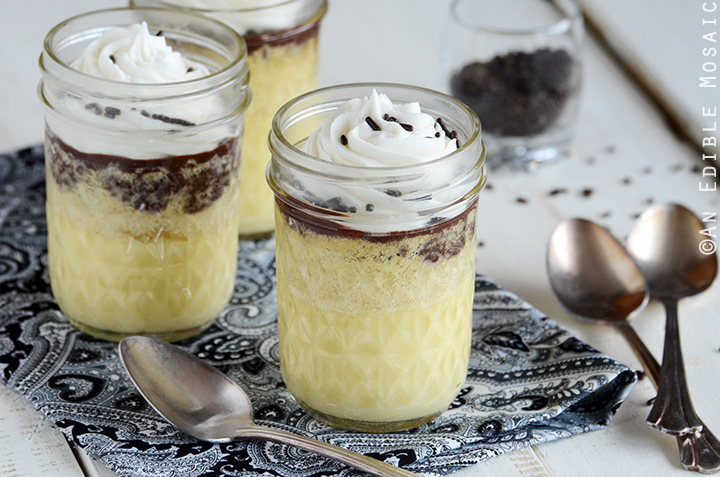 Print
Individual Boston Cream Pies in a Jar
Prep time:  30 mins
Cook time:  50 mins
Total time:  1 hour 20 mins
Yield: 11 individual cakes
Creamy custard is baked in individual jars with a light vanilla butter cake on top, and then topped with dark chocolate ganache and white chocolate buttercream for a fun spin on a classic Boston Cream Pie.
Ingredients
Custard:
Cake:
Dark Chocolate Ganache:
White Chocolate Buttercream:
Other:
Instructions
Notes
To Make in Advance: These cakes can be made up to three days ahead of time; store them in the fridge and let them sit at room temperature for about 20 minutes before serving.
3.3.3070

#ad If you're looking for an easy baking project t