This weeknight-friendly recipe for Lightened Up Chicken Tikka Masala Soup recipe is lower in carbs without sacrificing flavor. 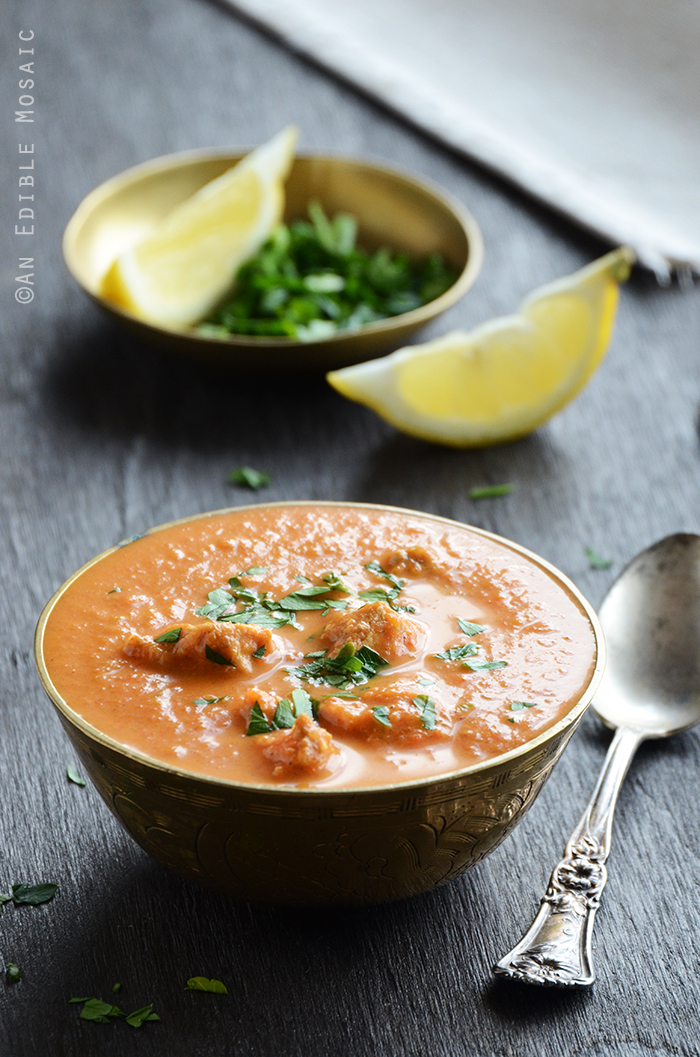 Did you ever meet someone, have a super brief conversation with them, and realize that if you had met at a different time and/or in a different place you could have really hit it off?

The other day at Wegmans I had the nicest cashier in the whole history of grocery stores. She was witty, joking about customers and the weather (I wish I could remember what she said, but trust me it was funny…and anyone who can make a witty weather joke is a unique find in my book). She was personable, asking questions that were interesting and stayed on the side of friendly rather than nosy. And in the time span of 10 minutes I learned that she hosts brunch for friends every Sunday morning, is studying for a degree in cross-cultural communication, and loves fish tacos. How cool does she sound? We could totally have been besties.

But how weird would it have been for me to point out the fact we were kindred souls and should hang out?

Pretty darn weird (and I don’t want to be that girl). Which is unfortunate because if I had met her and we had started chatting at spinning class or book club, it would have been totally acceptable to invite her to coffee. Sigh. 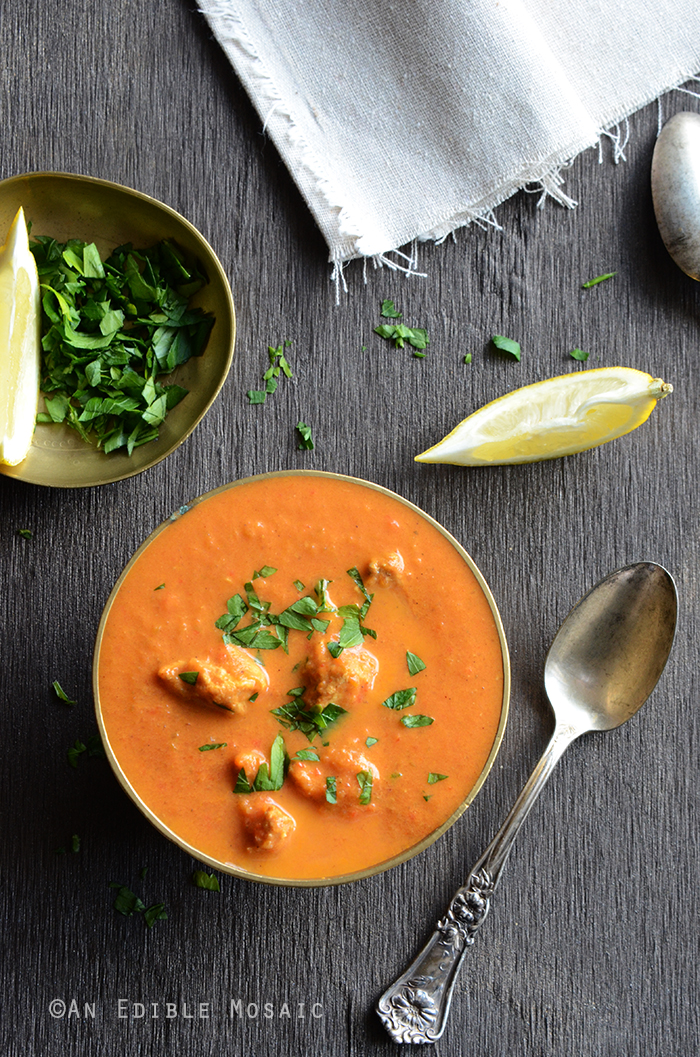 Anyway, I was buying ingredients for this soup that day at Wegmans. It was one of those recipe ideas that came to me right at the grocery store in a moment of inspiration. I was craving Indian food. (Actually, if I’m being honest, I wanted a super quick, lazy version of Chicken Tikka Masala, and the idea of turning it into soup came to mind.)

My version is naturally gluten-free and pretty lean – full of veggies and light on fat – but definitely big on flavor! (To lower the fat content even more, you can skip the addition of cream or coconut milk at the end; this soup really won’t suffer for it.) Boneless skinless chicken breast is a great source of lean protein here; it’s something that I always have in my freezer and utilize all the time, but rarely share recipes for. I think I need to change that. 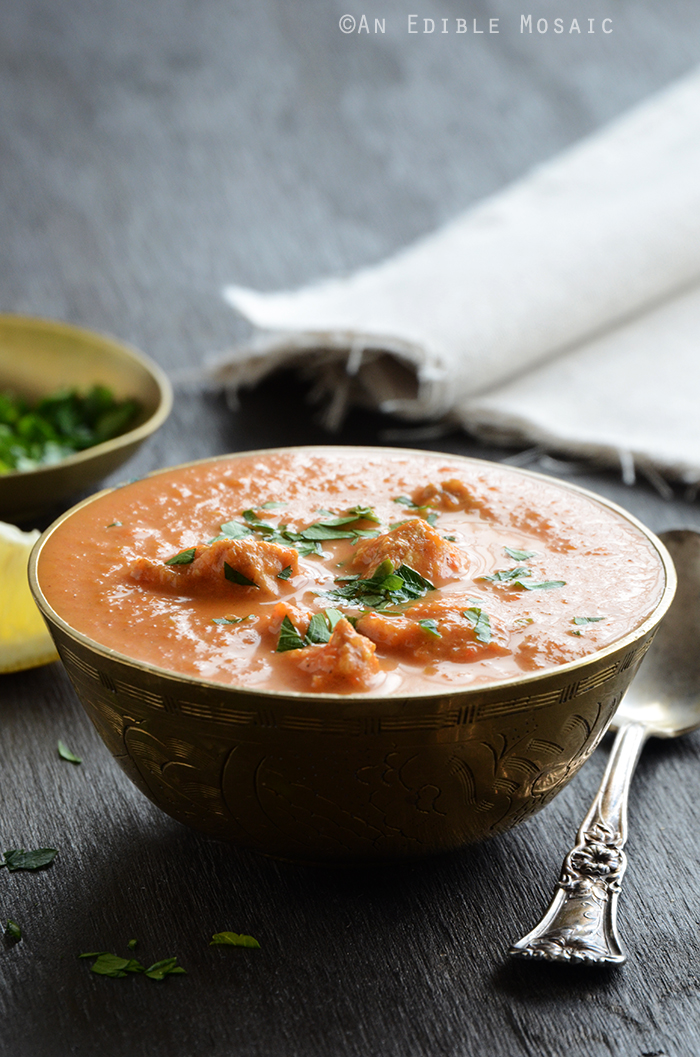 This soup comes together pretty quickly; if you’re so inclined, you can even chop the veggies beforehand (it’s perfect if you do meal prep on the weekend!). That way, when you go to make this soup on a weeknight everything is waiting for you. Remember to marinate your chicken at least a couple hours before cooking so the flavors have time to blend and the chicken can absorb them.

As written, the heat level of this soup is pretty low (mild!), but that can easily be adjusted up. Just add more cayenne pepper to the spice mix or hot sauce of your choice to the soup. And if you find that your tomatoes are a bit on the tart side, you can always add a touch of honey to taste (start out small – a little goes a long way!).

For the Indian food lovers, I think this one will be a new favorite. (And for those of you who are in the mood for Indian flavors and have a bit more time to play with, check out my Indian Butter Chicken, which will probably always hold the #1 spot for Indian food in my heart.)

What is the Difference Between Chicken Tikka Masala and Butter Chicken?

This dish is an easy one to make into soup! Chicken Tikka Masala is traditionally quite a saucy dish, similar to many curries. It already has a creamy tomato-based sauce, so all I did was thin it out a bit to turn it into soup. 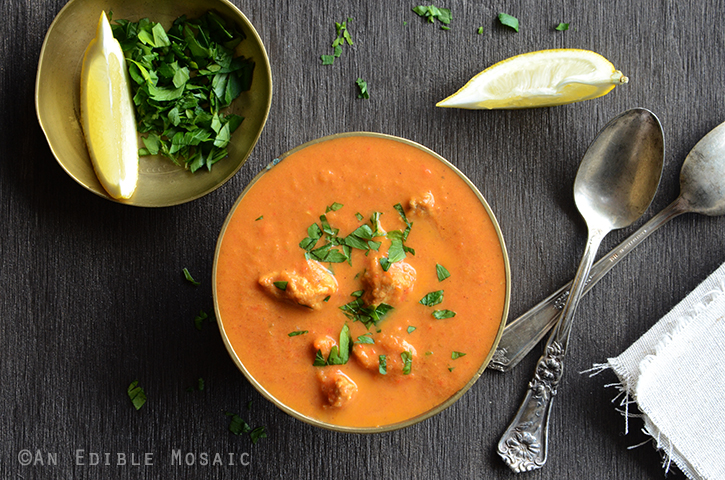