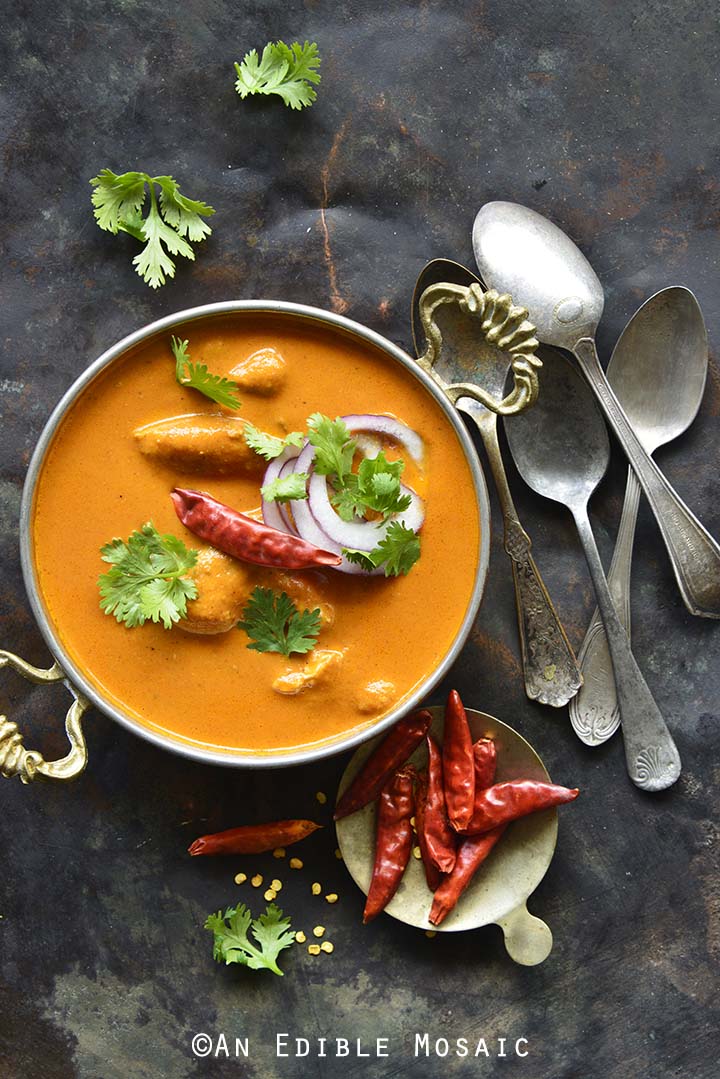 This is my very favorite meal in the whole world. (And I’m excited because I only make it two or three times a year…after all it is butter chicken!)

I’ll admit this recipe may look intimidating at first glance because of the long ingredient list and drawn out instructions. But take a deeper look…a lot of the ingredients are probably things you already have in your fridge or pantry, and not including marinating the chicken, this dish only takes about two hours to prepare.

Think about it this way: you’re only two hours away from heaven. And on a Sunday afternoon, what could be better than the smell of Indian spices filling the house?

I invite you all to try my favorite dish and let me know how you like it. By the way, I’d love to hear what your favorite meal is! 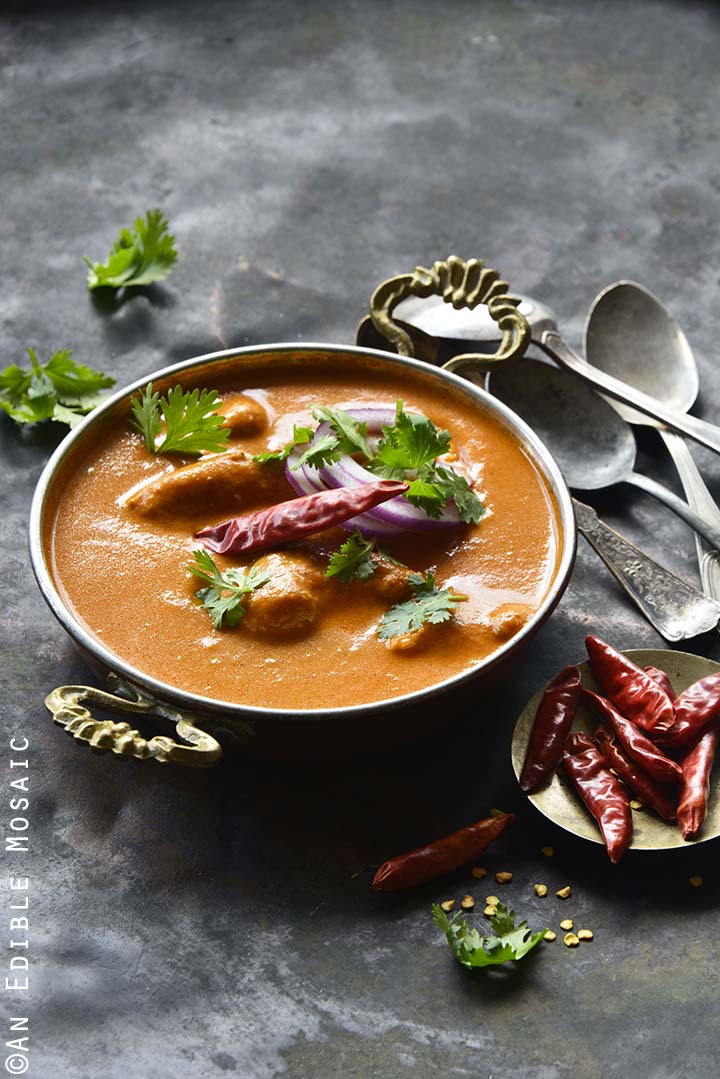 Indian Butter Chicken and Where it Comes From

Murgh makhani (also known as butter chicken) is an Indian dish of chicken marinated in a spiced yogurt mixture and typically cooked in a tandoor, which is a traditional clay oven. For home cooks, you can grill or roast the chicken in a hot oven. Once cooked, the chicken is combined with a richly-spiced tomato-based cream sauce that’s made even more luxuriously velvety with the addition of butter.

According to Wikipedia, chicken makhani was invented in the 1950s by three Indian restauranteurs in Delhi: Kundan Lal Jaggi, Kundan Lal Gujral and Thakur Dass. The story goes that they came up with the recipe by combining leftover chicken with a creamy spiced tomato gravy that was rich with butter.

What Ingredients are in Indian Butter Chicken (Makhani) Sauce?

Along with garam masala spice mix, butter chicken usually has fenugreek (which has a pleasant almost caramelized sugar aroma) and turmeric (which adds color). You can also add chili powder. Additionally, feel free to customize your spice blend by adding more of any spice you like (I usually add a bit more cumin, coriander, and cinnamon).

How to Make Indian Butter Chicken

Indian Butter Chicken is very easy to make! Cook the chicken and gravy separately, and then combine to serve.

The thing to keep in mind when you want to make butter chicken is that the chicken needs to marinate in the fridge at least two hours before cooking (but overnight is better, and up to two days is fine). After marination, the chicken is traditionally cooked in a clay oven called a tandoor; however, at home, I either grill it or cook it in the oven (425F for about 12 minutes or so). Chicken is fully cooked when it reaches an internal temperature of 165F and the juices run clear.

Don’t rush the marinade because this is what lends flavor to the chicken, and additionally helps tenderize the meat.

To make Makhani gravy, starting by cooking onion, garlic, ginger, and jalapeno in oil. Subsequently, add tomato products (like diced or crushed tomatoes, and tomato paste), along with liquid (such as water or chicken stock). Spices lend depth of flavor, and then the mixture cooks a bit so the flavors can blend.

After cooking a while, blend the gravy until smooth. I then add golden raisins for bursts of sweetness to help balance the spice. After that, the cooked chicken is added. Finally, the dish is finished with butter and cream and typically served with basmati rice. The sauce should be thick enough on its own without the need to add flour of any kind. 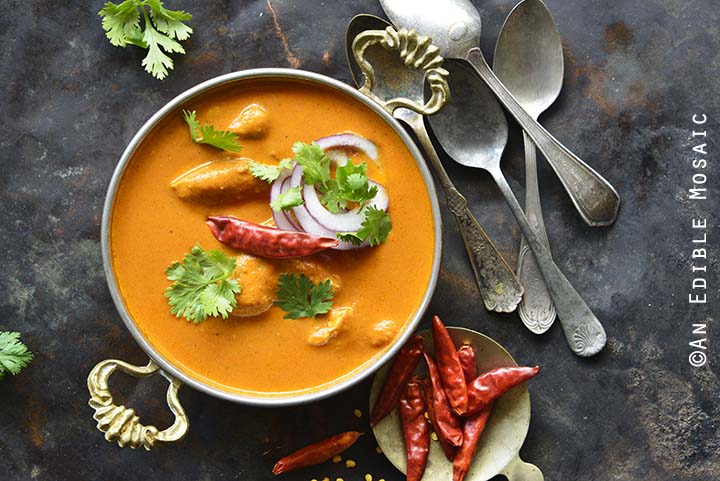 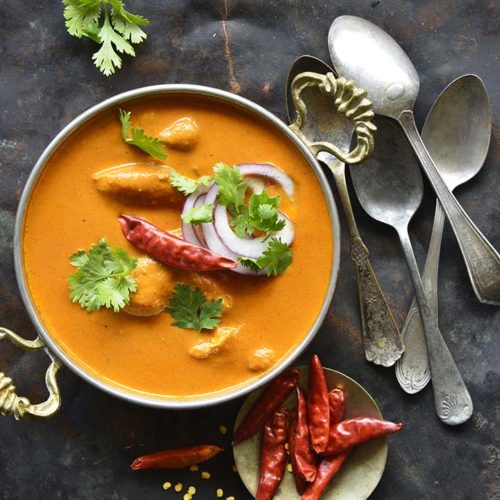 Update (May 16, 2018): I made this dish again and perfected the recipe and snapped a few pictures, so I decided to update both the recipe and the photos in this post. As a point of comparison to show how much my photography has evolved, I kept one of my original photos (below). 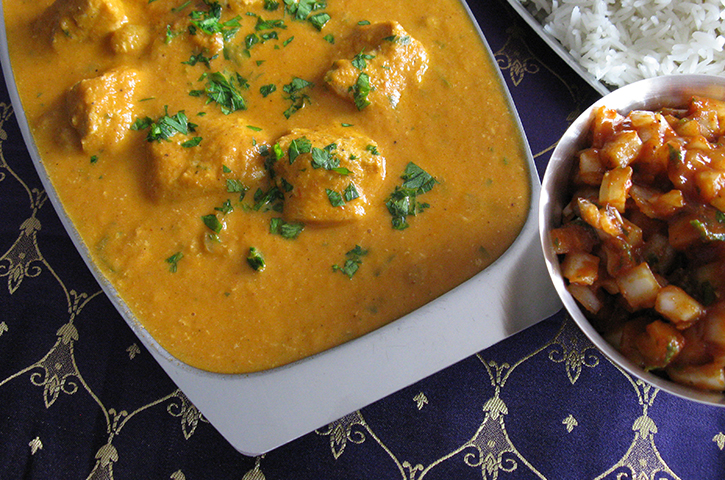