With green chilies, cumin, coriander, chili powder, and tons of cheese, this Mexican Keto Stuffed Peppers Recipe packs a punch of flavor but with just 8g net carbs per serving! 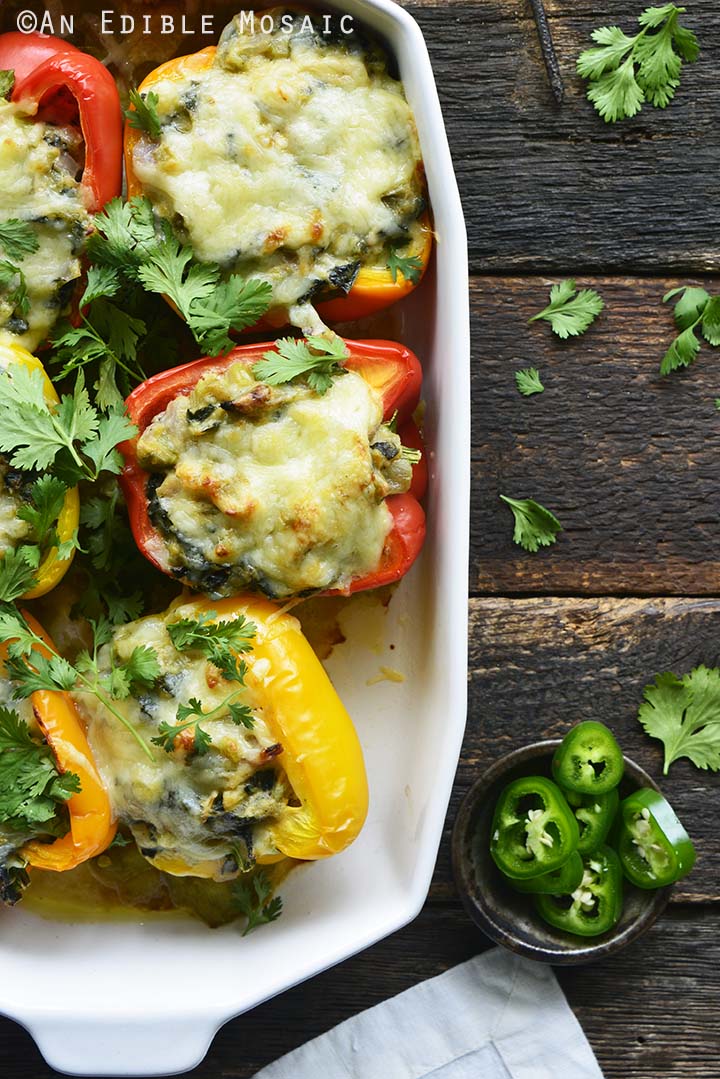 Just about any given night of the week, I can be in the mood for Mexican food for dinner. The thing is, I try to keep things low carb most of the time and that doesn’t always work when you’re ordering takeout!

The upside is that once you start cooking your favorites at home, you can make them to suit your preferences. Low carb, gluten free, paleo, whatever works best for your way of eating.

Of course for this recipe you can also adjust the spice level, add your favorite protein, and use up whatever vegetables need to be used in your fridge.

And let’s not forget another bonus of cooking at home: it saves money! You’ll probably spend less making a whole batch of Mexican Keto Stuffed Peppers than you would ordering delivery. And if you make it at home, you get 6 servings out of it, so dinner is handled for a few nights. 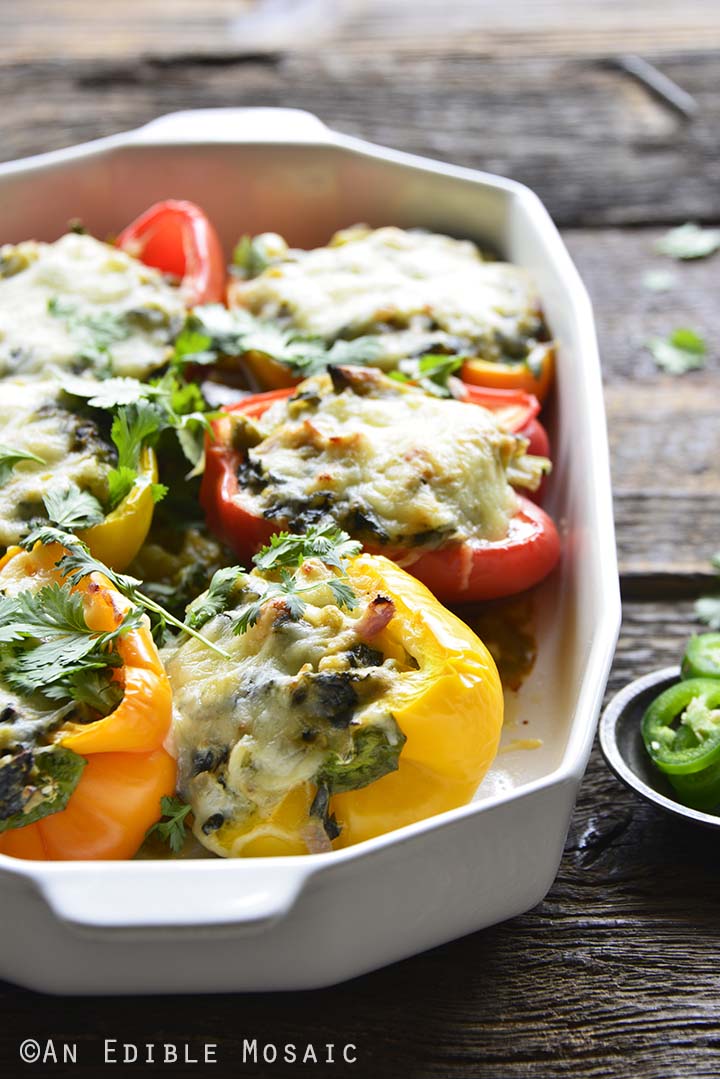 Can You Have Bell Peppers on Keto?

How Many Carbs Are in Bell Peppers?

Here are the carbs in 100g of red and green bell peppers, according to USDA FoodData Central: 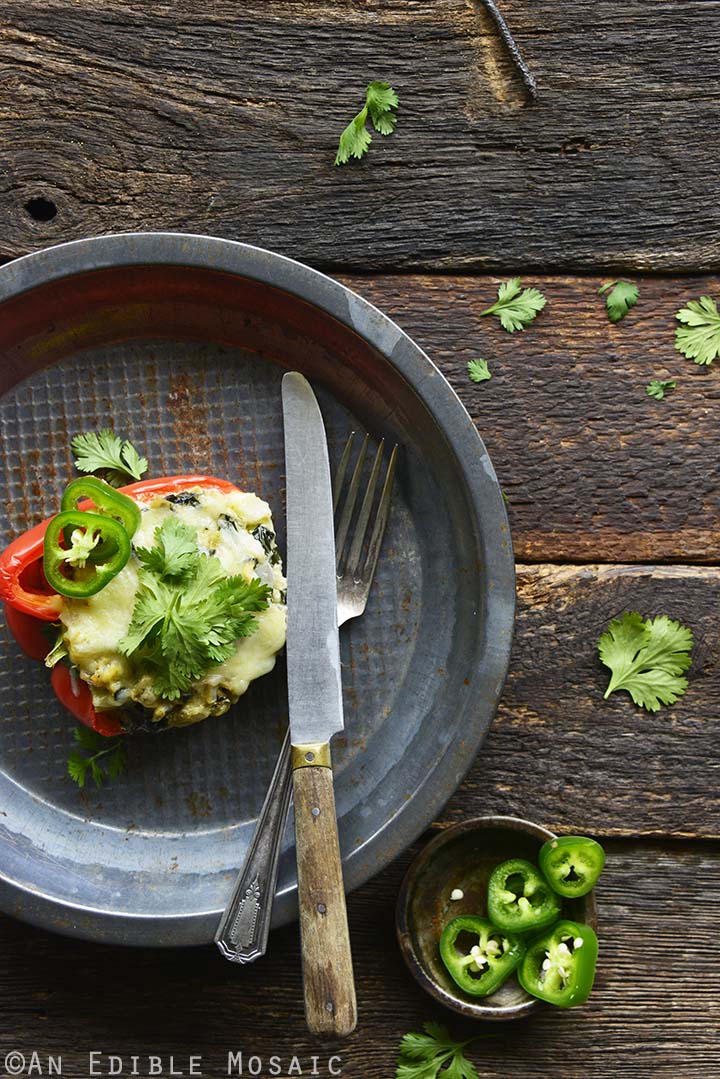 How Do You Soften Peppers Before Stuffing Them?

Some recipes require pre-cooking the bell peppers before stuffing them. When that’s the case, the recipe will usually specify briefly boiling or baking the peppers.

However, for this recipe there’s no need for the extra step of softening the peppers before stuffing them! For this Mexican Keto Stuffed Peppers Recipe you just fill the peppers with the cheesy chicken and vegetable filling and then bake them. 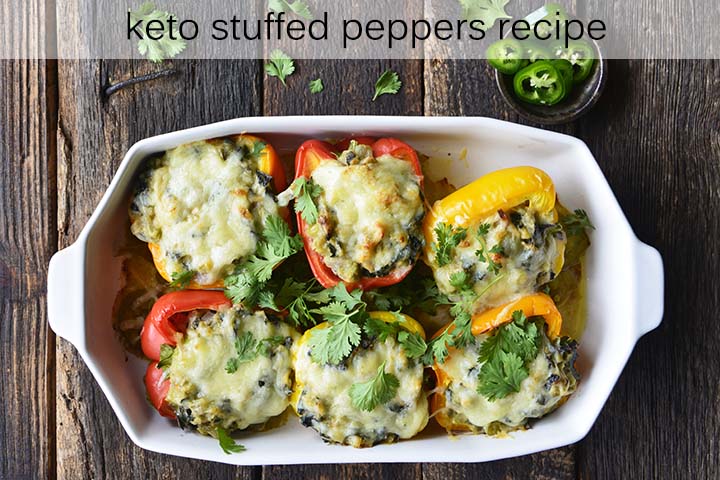 Green chilies, onion, and garlic combine with cumin and coriander for a delicious Mexican take on low carb stuffed peppers!

This dish has low carb vegetables like celery, kale, and bell pepper to make it a well-rounded meal, and leftover chicken is a quick and delicious protein source. Feel free to use whatever protein you like, such as ground beef or turkey.

The cream cheese-based sauce is made even cheesier with the addition of white cheddar, but if you prefer, go ahead and use your favorite Mexican cheese for topping. 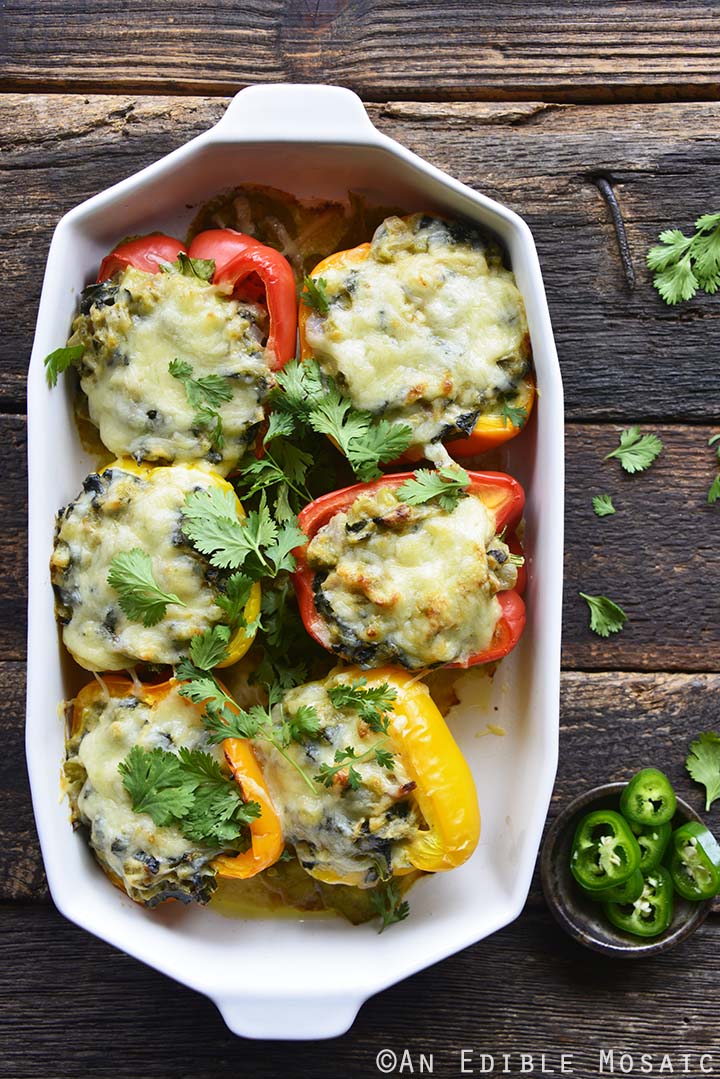 How to Assemble Keto Stuffed Peppers

Once the filling is made, it’s easy to assemble and bake keto stuffed peppers.

Spray the inside of a casserole dish with olive oil spray, and then pour in a can of green chilies. 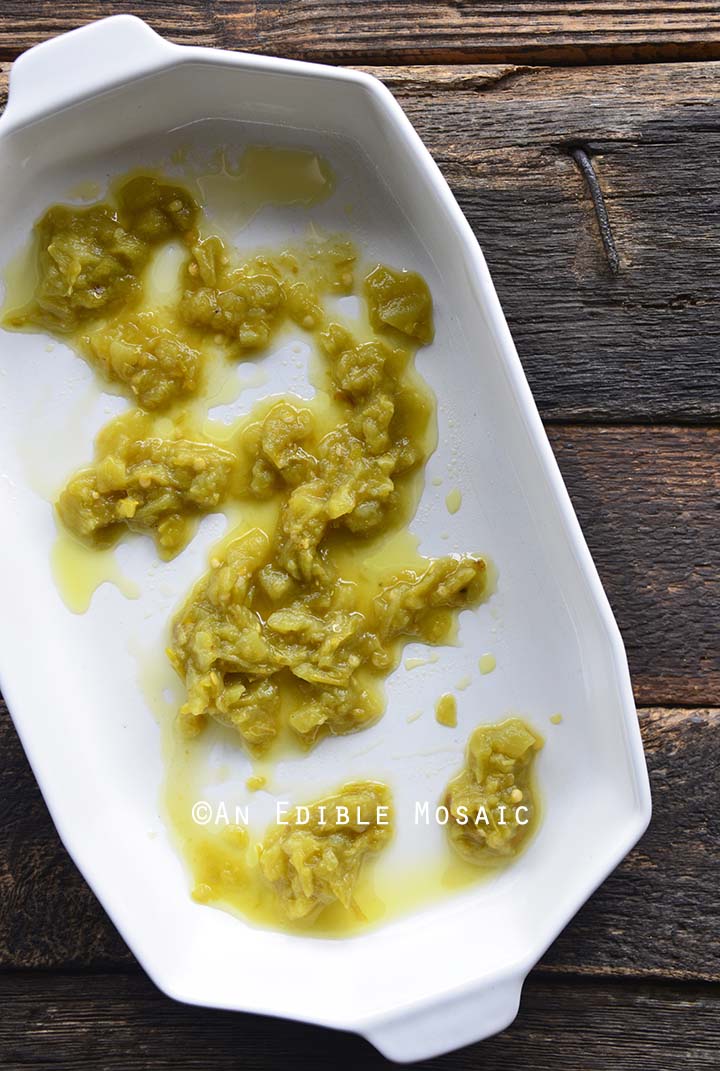 Add the halved, seeded bell pepper halves (cut side up) to the dish. 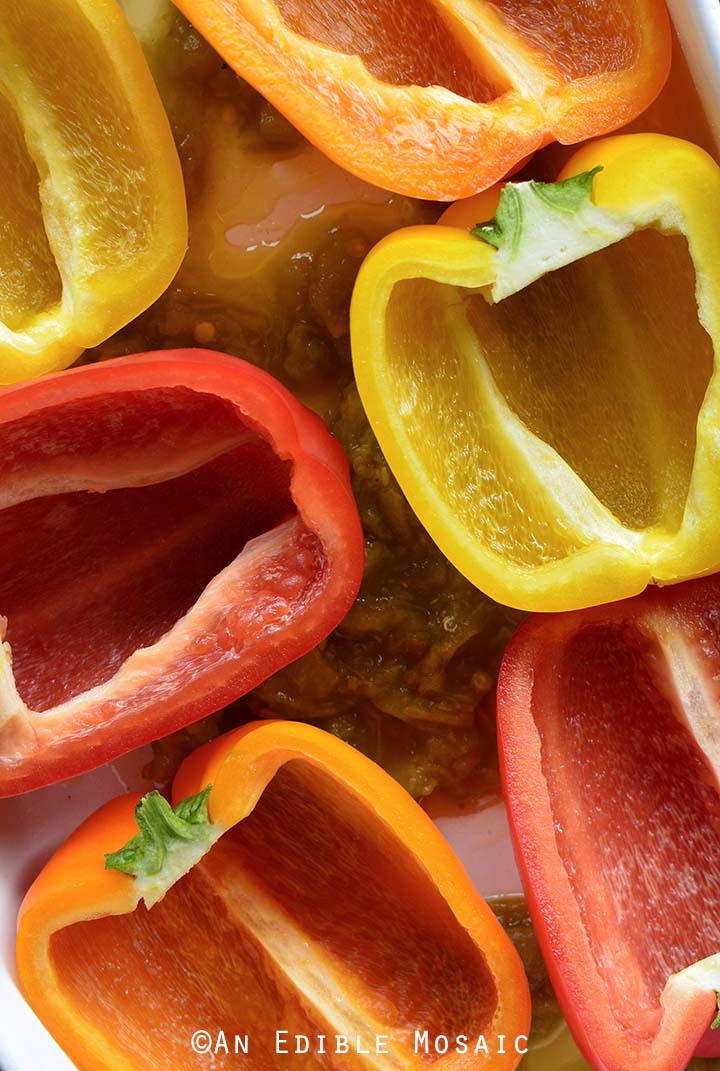 Stuff the pepper halves with the filling. 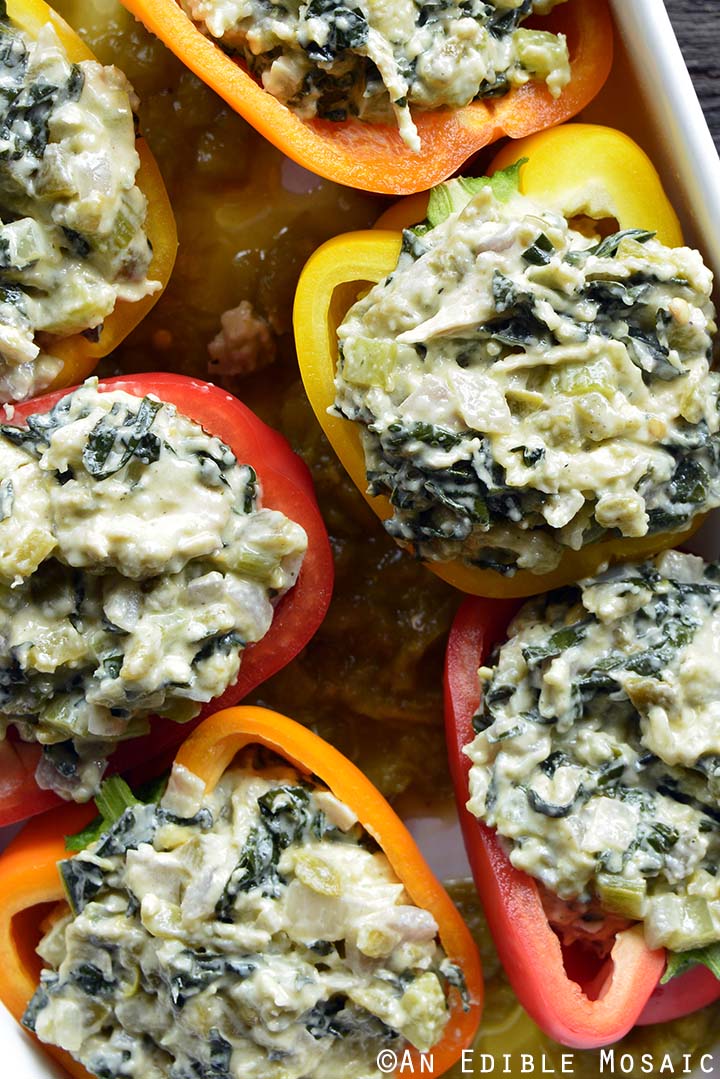 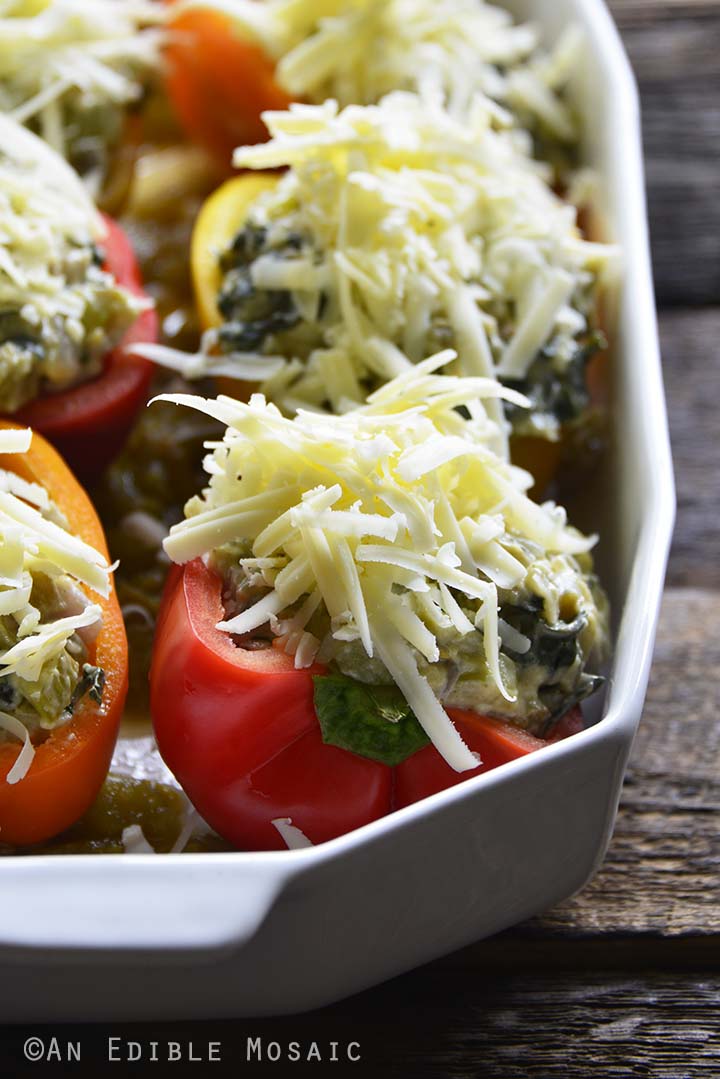 Bake at 400F until the cheese is melted and golden, about 20 minutes. 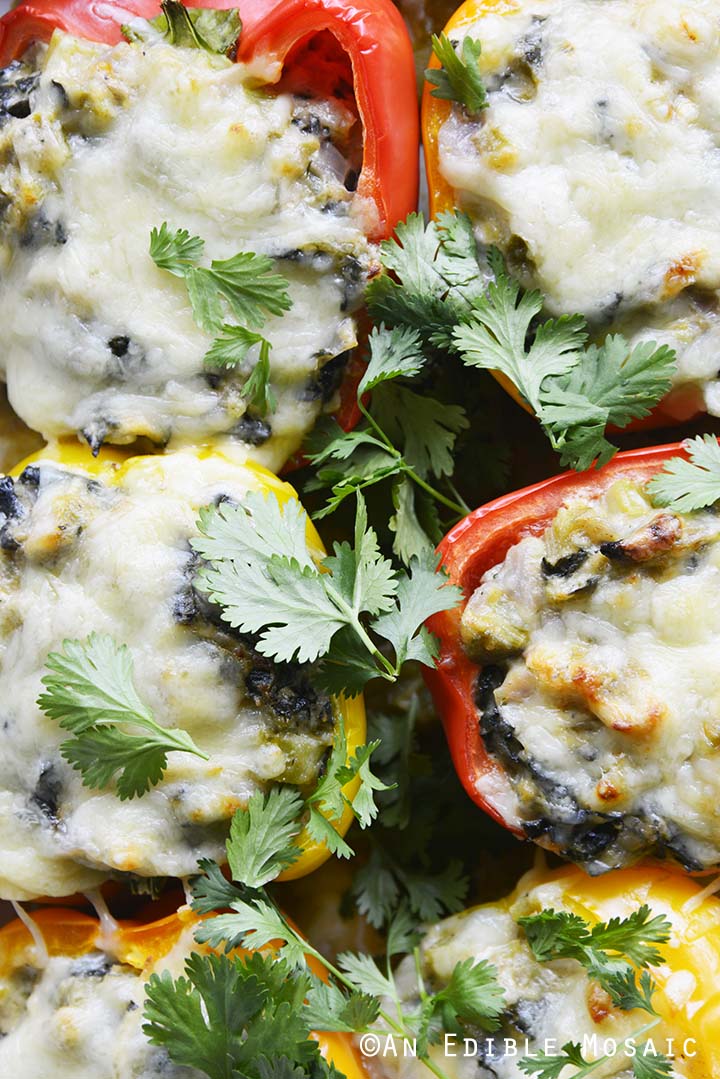 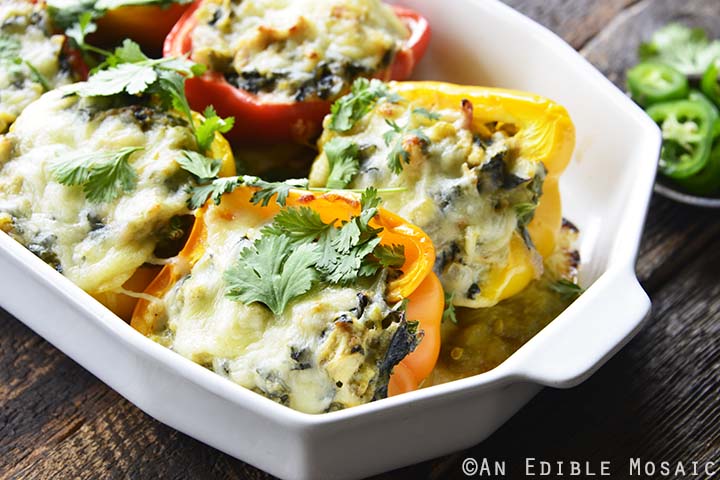 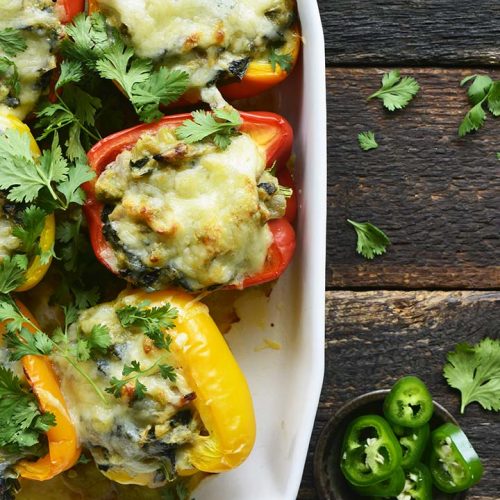 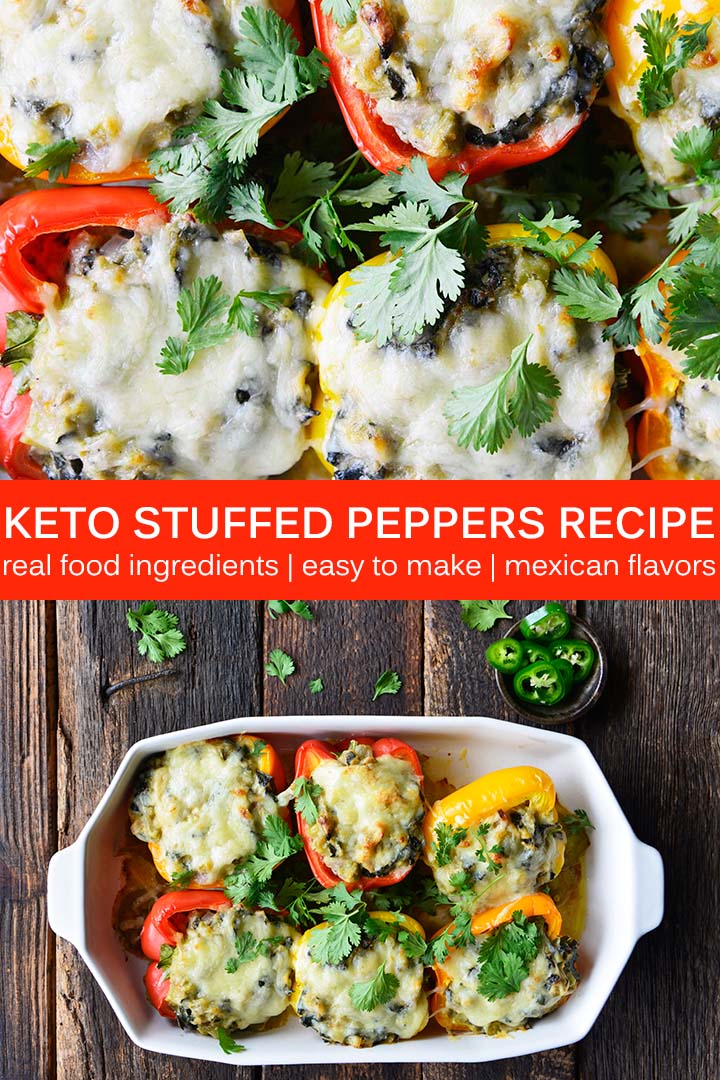