This is the best Chewy Brownie recipe with gooey, chewy inside and crispy outside brownies that have rich chocolate flavor. They’re even better than brownies from a box mix!

I recently happened on the best-ever homemade chewy brownies recipe completely by chance.

I wasn’t in the mood for dessert at the time. Surprisingly I didn’t have visions of chocolate beckoning to me, and I certainly didn’t think I needed a new brownie recipe. (Especially since the last brownie recipe I shared with you is not only a bit healthier than most, but still completely satisfying.)

I had about 20 minutes of extra time to kill and two bookcases full of cookbooks with which to waste time. I had been working on writing an article all day, so in need of a diversion from work, I turned to The Best of America’s Test Kitchen 2011, a cookbook I’ve only peeked into maybe once or twice before.

As I flipped through the recipes, I stopped at the Easy Cheesy Quiche for Two to ogle it for a moment, then lingered a bit in the seafood chapter (boy do their Maryland Crab Cakes sound divine), and finally flipped to the back of the book. Of course, as any cookbook connoisseur knows, the desserts are lurking back there. I really wasn’t planning to make anything, just doing a little window shopping.

Let me just say, window shopping of any kind is a dangerous practice.

The Inspiration for the Best Chewy Brownies Recipe

I started reading the intro to America’s Test Kitchen’s Chewy Brownies recipe. The cookbook mentions how it was a “dicey admission” (and yes, I love that phrase too) to admit to loving box-mix brownies. Who can’t relate to that though, right?!

Brownies from a mix are always perfectly textured: chewy inside, slightly crisp on the edges, with that gorgeously crackled top. Oh yes, I could relate, and very well, thank-you-very-much.

And even though I wasn’t planning to make brownies, suddenly that’s all I could think about.

Of course I made my version of them the first chance I got.

Interestingly enough, the author of that cookbook says that the key to perfect chewy brownies is all about the fat. More specifically, the ratio of saturated to unsaturated fat.

Here are the ratios they give:

That’s why we use a combination of butter and oil in this brownie recipe.

I never would have thought that the key to the perfectly-textured brownies lies in its fat ratio, but there you have it.

This recipe for Chewy Brownies is my version, based on that recipe. And it’s everything a chewy brownie should be, this side of a box mix! Plus, this recipe comes together quickly and easily in a single bowl.

These cocoa powder brownies are rich, dense, and gooey with the perfect chewy factor inside and crispness outside. They have a deep chocolate flavor that’s enhanced with espresso powder and vanilla. And they’re sweet, but not too sweet! Also, you can add your favorite nuts for a little crunch.

If you’re a fan of the boxed variety, this recipe will be your new best friend. And you may never buy a pre-made brownie mix again!

How to Make Homemade Brownies

How Long do Brownies Last?

Once the brownies are completely cool, wrap them well with plastic wrap.

Store them well-wrapped at room temperature for up to 5 days, in the fridge for up to 2 weeks, or in the freezer for up to 6 months. 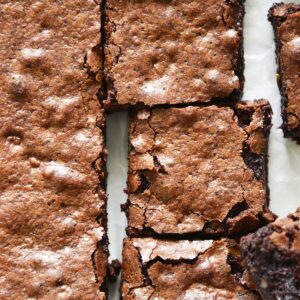 By: Faith Gorsky
This is the best Chewy Brownie recipe with gooey, chewy inside and crispy outside brownies that have rich chocolate flavor. They're even better than brownies from a box mix!
5 from 7 votes
Print Recipe Pin Recipe
Prep Time 10 mins
Cook Time 35 mins
Course Dessert
Cuisine American
Servings 24 servings
Calories 238 kcal

This post was first published on An Edible Mosaic on June 26, 2013. I updated it with more information and new photos on October 31, 2022.