The Best Low Carb Cinnamon Rolls Recipe yields soft and fluffy rolls with rich swirls of sweet cinnamon. An easy-to-make icing is literally the icing on the cake! And bonus, they’re much faster to make than traditional cinnamon rolls because they don’t require rise time. 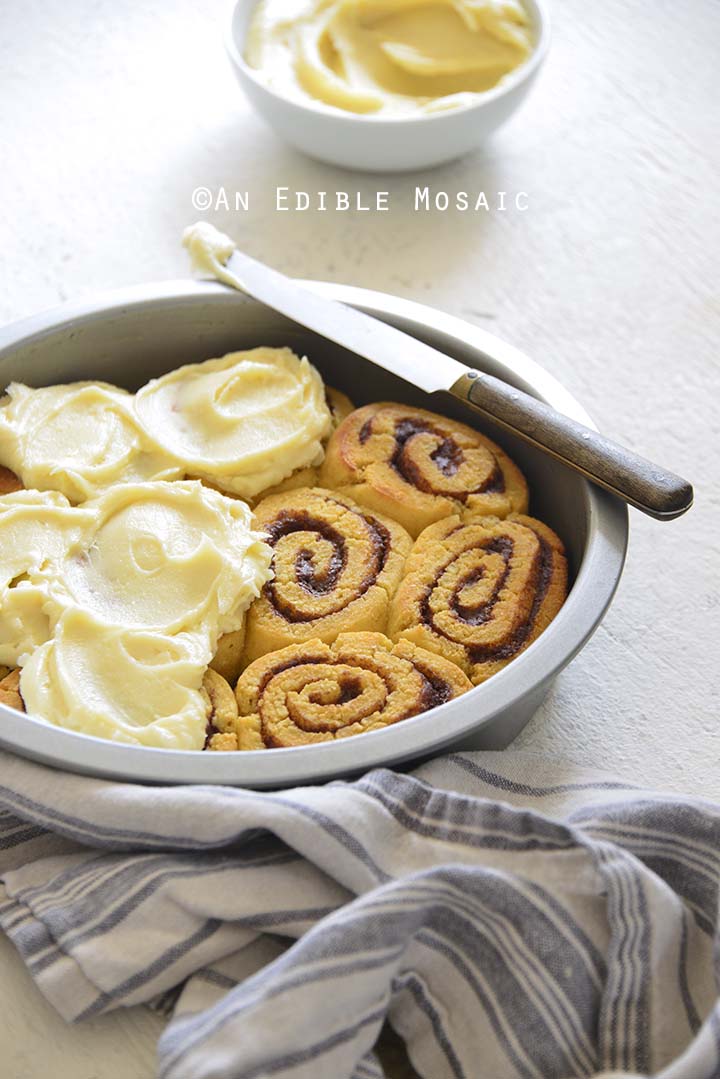 This post is dedicated to everyone everywhere who has ever fallen victim to the evil geniuses at Cinnabon who make carb-y treats that smell like heaven. Surprisingly, it is possible to eat a perfect cinnamon roll and not subsequently crash from a carb-induced coma!

Most of us can probably agree on what makes the best cinnamon rolls, and the best low carb cinnamon rolls should be equally mind-blowing. Soft, tender, and fluffy slightly sweet dough, and sweet, buttery, cinnamon swirls. Topped with a sweet vanilla cream frosting, because frosting makes everything better.

Soft, fluffy, and indulgent-tasting were my goal when coming up with the Best Low Carb Cinnamon Rolls Recipe. This recipe took me more tries than I remember (or care to admit, lol! I’ve been working on perfecting it for years), but in the end it was worth it. These are everything that fabulous cinnamon rolls should be.

Fluffy dough, gooey vanilla-laced brown sugar swirls, and velvety thick sweet vanilla icing. These are literally the cinnamon rolls of your dreams, and the best part is they’re low carb!

About 5 years ago when I first started my quest to develop the perfect cinnamon rolls recipe, I wasn’t going for low carb. I was trying to replicate Cinnabon Cinnamon Rolls, those deliciously evil treats that perfume the air of so many shopping centers and airports.

I came up with a pretty close replication of Cinnabon (which I have yet to share!), and then started working on a low carb version. 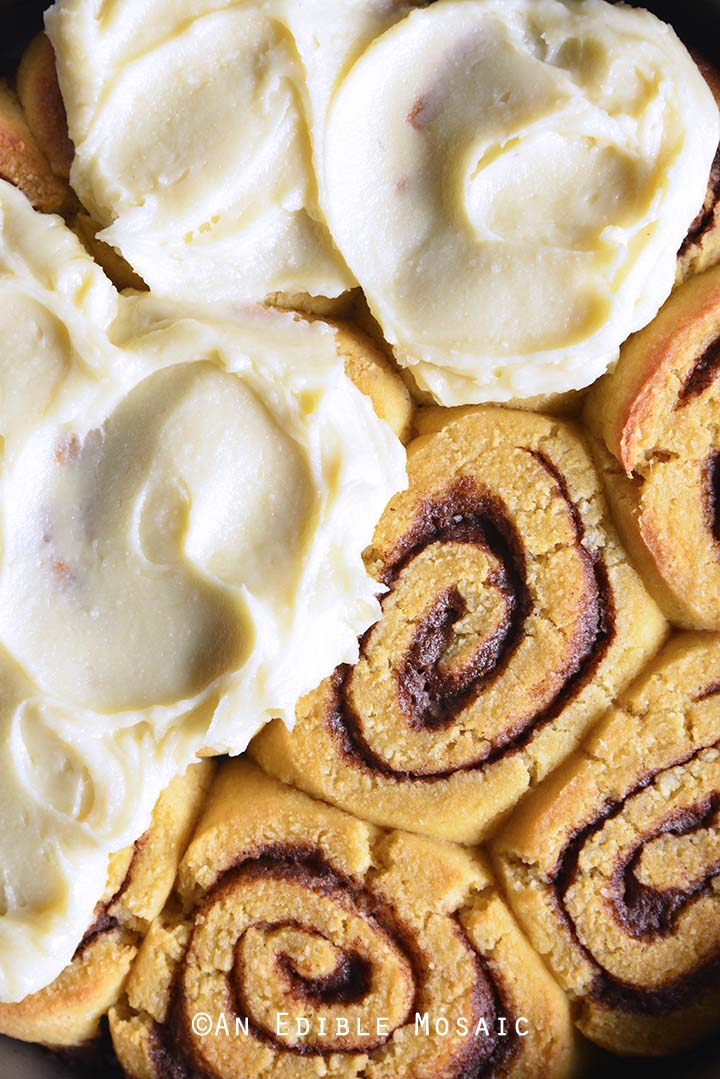 I’m answering a few of your most commonly asked questions to help ensure your cinnamon rolls are delicious every time!

How to Make Soft Cinnamon Rolls

In regular baking (i.e., when you’re using wheat flour and cane sugar), it’s fairly easy to make a fluffy, soft cinnamon roll because of the gluten in the flour. The main tricks are:

How to Make Cinnamon Roll Filling

The filling for cinnamon rolls is typically just sugar (either white sugar, brown sugar, or a mixture of both), slightly softened butter, and cinnamon that is stirred to combine.

Can You Refrigerate Uncooked Cinnamon Rolls?

Most cinnamon roll recipes allow the dough to be made a day or so in advance. Once the dough is made and rolled out and the cinnamon filling is spread on top, it is rolled up into a log. At this point, you can refrigerate the dough, in log form or cut the log into rolls and arrange them in a greased baking pan.

Pro Tip: You can make the dough for this Best Low Carb Cinnamon Rolls Recipe up to two days in advance (I give directions on how to do this in the Notes below the recipe).

How to Roll Out Cinnamon Roll Dough

I have three tips to help you easily roll out the dough for The Best Low Carb Cinnamon Rolls Recipe: 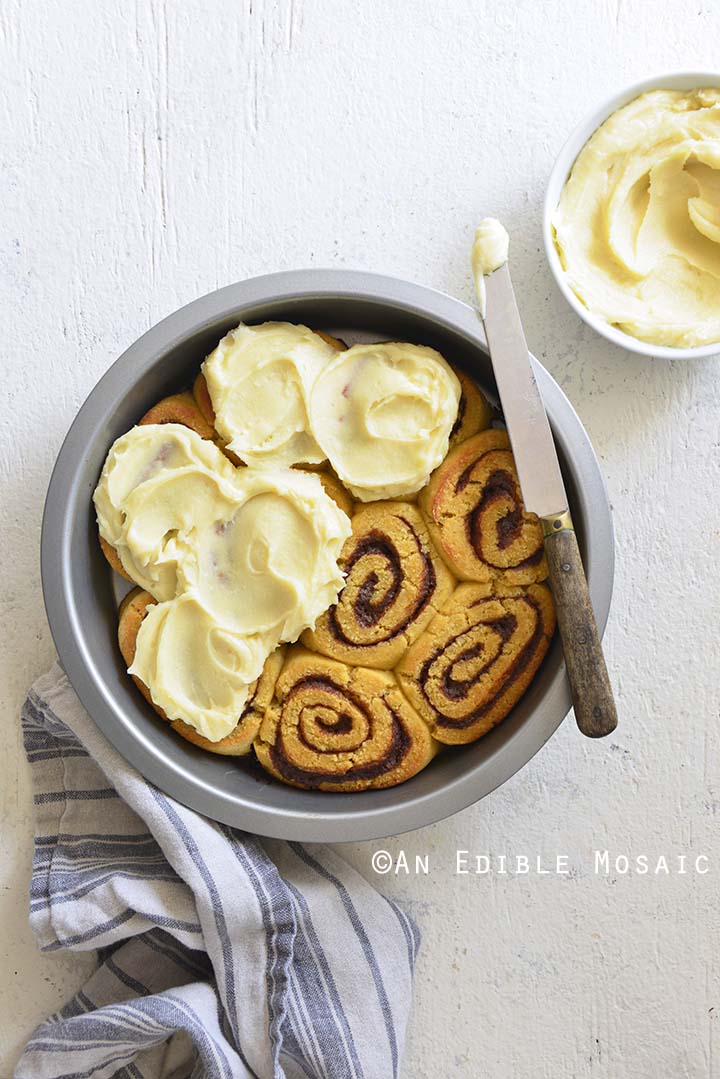 Make this recipe and you’ll see why I think it’s the best keto cinnamon rolls around! (And trust me, I’ve tried more than my fair share, lol.)

The dough is light and fluffy with perfect sweet swirls of cinnamon and velvety-smooth vanilla-scented icing.

Keto Cinnamon Rolls with No Cheese

A lot of low carb and keto cinnamon rolls recipes use that is called fathead dough as the base. Fathead dough is a mozzarella cheese-based dough, in which mozzarella is melted along with a bit of cream cheese, and then combined with an egg and some type of flour (usually almond flour or coconut flour). This type of dough works really well at simulating a bready texture, and makes a pretty darn amazing pizza crust!

The only thing is, I find that as the dough cools, the next day or two days later baked goods made with fathead dough tend to have a cheese flavor. This isn’t a problem with pizza, but there’s no place for cheese flavor in my Best Low Carb Cinnamon Rolls Recipe! 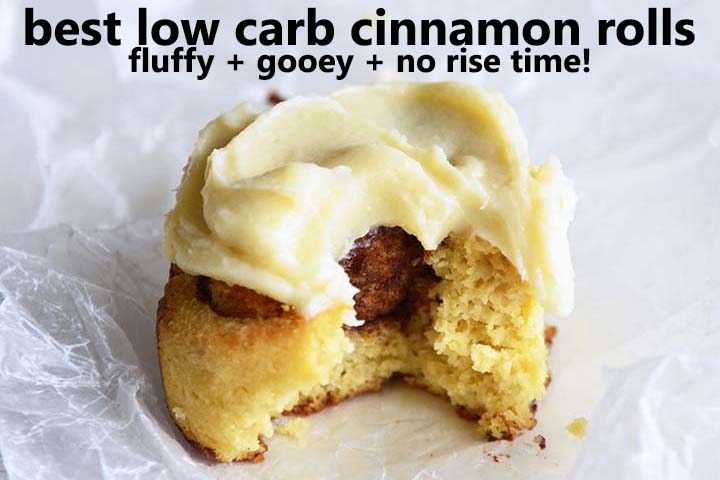 How to Make the Best Low Carb Cinnamon Rolls Recipe

Basically, there are three steps to making cinnamon rolls: 1) the dough, 2) the cinnamon sugar filling, and 3) the icing. Even though this is a non-traditional dough that uses almond flour and coconut flour in place of wheat flour, the dough is still fairly easy to make and doesn’t even require a stand mixer.

First make the dough, and then roll it out and spread the sweet cinnamon mixture on top. Roll up the dough into a log, and then cut it cross-wise into cinnamon rolls and bake. While the cinnamon rolls bake, make the icing for the Best Low Carb Cinnamon Rolls on the stovetop. 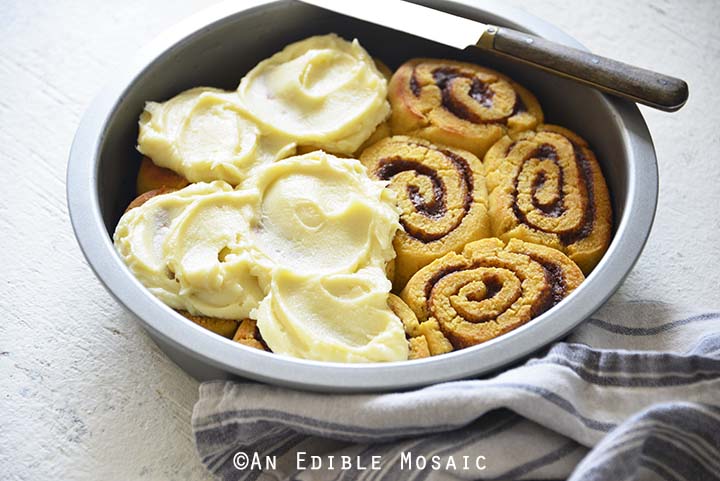 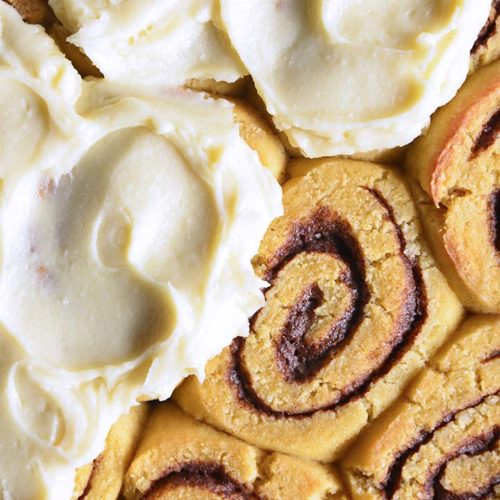 By: Faith Gorsky
The Best Low Carb Cinnamon Rolls Recipe yields soft and fluffy rolls with rich swirls of sweet cinnamon. An easy-to-make icing is literally the icing on the cake! And bonus, they’re much faster to make than traditional cinnamon rolls because they don’t require rise time. 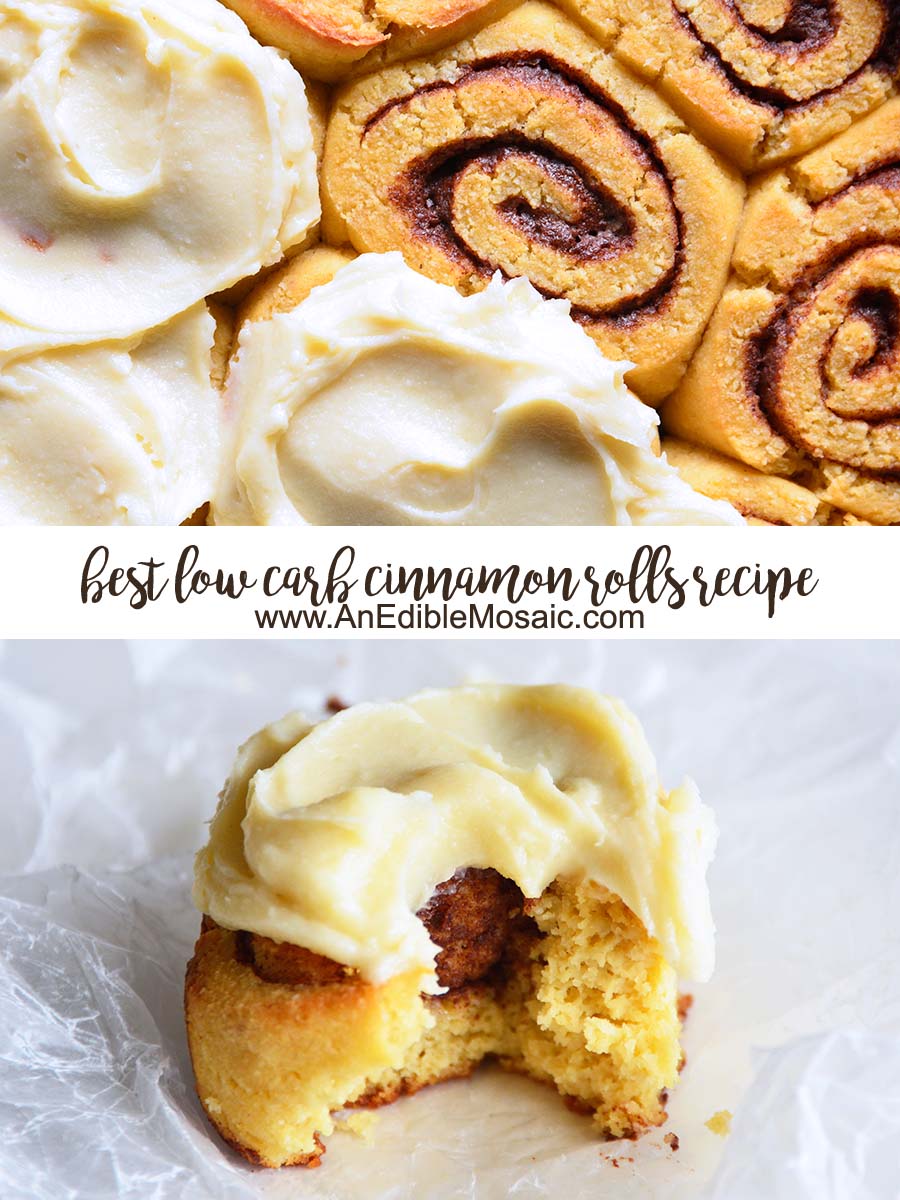