I’ve always been drawn to pirates. Who doesn’t enjoy tales of Blackbeard and Captain Jack Sparrow?!

It sounds like a very interesting lifestyle; traveling around the high seas exploring and treasure-hunting! Of course not so much the plundering, pillaging, and well, pirating that they do. But pirate lore always fascinates me.

Years ago I made Dark and Stormy Cupcakes with the same flavor profile as the cocktail. Since then I’ve wanted to make my own version of this adult beverage. After recently sharing my recipe for Polyjuice Potion, I was inspired to do it!

This is my spin on a classic Dark ‘N Stormy Cocktail. I wanted to add spice to complement the ginger flavor, while keeping the integrity of the drink and using Goslings Black Seal Rum.

I decided to make a simple syrup with warm spices, and it couldn’t be any easier. To make spiced simple syrup, just add spices to sugar and water and bring it to a boil in a saucepan on the stovetop.

Traditionally, a Dark and Stormy Cocktail doesn’t add simple syrup, but because here we use simple syrup as a vessel to add spice, we need to balance out the added sweetness. A little fresh lime juice is perfect. (Just between you and I, to be perfectly honest I like this version even better than the original!)

This Spiced Dark and Stormy Cocktail recipe features the caramel, vanilla, molasses-y flavor notes of Goslings Seal Black rum along with the fresh effervescence and crisp bite of ginger beer. The sweet warm spicy flavor of spiced simple syrup and the brightness of lime juice tie everything together beautifully. It’s a fun twist on the classic beverage.

Goslings trademarked it in Bermuda in 1980 and in the U.S. in 1991. This means that if a drink is called a Dark and Stormy, Goslings Black Seal Rum must be used to avoid potential litigation. (Read more about this on Forbes.)

Its ominously dark name paints quite the picture, and this is definitely a cocktail with an interesting history.

History of the Dark ‘N Stormy

As the story goes, in 1806 James Gosling set out from England to America in a chartered ship called the Mercury. After 91 days at sea his charter had run out and the closest port was St. George’s, Bermuda.

By 1860, Gosling and his family had started a rum business. It’s said that they sold rum from a large barrel and encouraged their customers to bring their own jugs to fill. After a while they sold their dark rum in repurposed champagne bottles that were corked and sealed with black sealing wax. Hence the name, black seal rum.

The Dark ‘N Stormy came a bit later though. After World War I, the Royal Naval Officers Club ran a ginger beer factory in Bermuda. The sailors purportedly discovered that a hefty splash of rum was a pretty fabulous addition to ginger beer. And the rest is history!

You can read more about the history of the Dark ‘N’ Stormy cocktail on CNN Travel, Scuttlebutt Sailing News, and Make Me a Cocktail.

Be sure to use real ginger beer (not ginger ale), which gives this drink a deliciously crisp ginger bite!

How to Make a Dark n Stormy Cocktail

For our Spiced Dark and Stormy Cocktail, we first make a spiced simple syrup by combining sugar, water, and spices in a saucepan on the stovetop. Once boiling, let the mixture boil for 30 seconds. Remove from the heat and cool to room temperature before using.

Tips for Making a Dark and Stormy Cocktail Recipe

What’s in a Dark and Stormy Cocktail?

A classic Dark ‘N Stormy contains dark rum and ginger beer served in a highball glass over ice with a squeeze of lime.

What is the Best Rum for a Dark and Stormy?

Because Goslings trademarked it, Goslings Black Seal Rum must be used to avoid potential litigation. Of course, if you’re making this drink at home, feel free to use whatever type of dark rum you like!

How is a Dark and Stormy Different Than a Moscow Mule?

Both drinks contain ginger beer and lime. The difference is that a Dark ‘N Stormy uses Goslings Black Seal Rum and a Moscow Mule has vodka.

Why is it Called a Dark and Stormy?

Supposedly the sailor who coined the name compared the drink’s murky look with a stormy sky and said it was “the color of a cloud that only a fool or a dead man would sail under.” (Find out more on Smithsonian Magazine.) 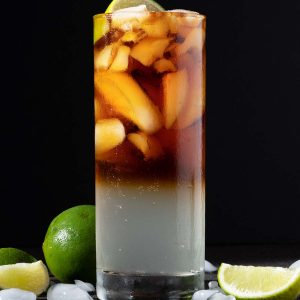 For the Spiced Simple Syrup: