Low-Carb Broccoli Stem Gratin is everything we love about a good gratin; it’s a rich, creamy, and cheesy side dish that you can pair with any number of things, from roast chicken to grilled steak. And bonus, this version uses broccoli stems so they don’t go to waste! 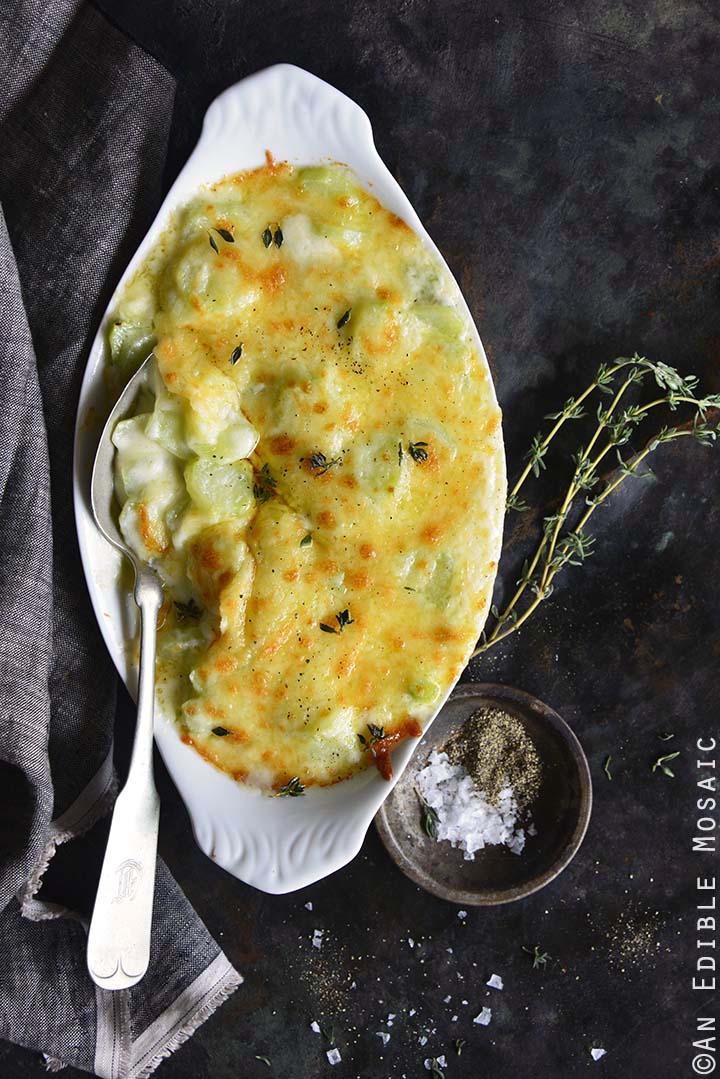 Most of us hear the word gratin and think potato. And most of us hear broccoli stem and think toss it. But neither of those are set in stone! Reducing food waste is always a goal of mine, so when I found myself with a pretty good amount of broccoli stems in the fridge, I wanted to think of a delicious way to cook them. And the other thing is, gratin can be just about any vegetable you want it to be! I love a good potato gratin, but this broccoli stem version is lower in carbs and arguably every bit as delicious.

A gratin is a recipe (basically a casserole, or even just an ingredient, such as thinly sliced potatoes) that’s topped with something that will brown on top (like shredded cheese and/or breadcrumbs), and is baked in a shallow dish. The name gratin comes from the French word gratiner, meaning “to broil”. Potato gratin is quite possibly the most common, but gratin can be made out of just about any kind of seafood, meat, pasta (like baked macaroni and cheese), or vegetable (commonly things like potato, cauliflower, or zucchini).

How to Make Potato Gratin

The variety of gratins are nearly endless, but because potato gratin is perhaps the most popular, we’ll talk about that one. To make it, start by liberally greasing the inside of a shallow baking dish (a gratin dish!) with butter; cut a clove of garlic in half and rub that along the inside as well.

Heat up a mixture of cream, whole milk, salt, black pepper, a touch of fresh-ground nutmeg, and if you like, a couple sprigs of fresh thyme and perhaps an extra clove of garlic in a saucepan on the stovetop until it reaches a slow boil. Turn the heat off, strain the mixture, and gently stir in very thinly sliced potatoes until coated.

Transfer the potato and liquid to the prepared dish, taking the time to layer them if you like (the creamy liquid should come just under the level of the potato, leaving enough headspace at the top for bubbling to occur). Sprinkle a generous handful of grated cheese (Gruyère, Parmesan, or a combination of both work particularly well).

Bake at 325F until the potatoes are fork-tender, about 1 1/2 hours, covering the top with foil if it starts to get too brown. Alternatively, if the top needs additional browning, run it briefly under the broiler.

Thinly sliced potatoes + cream/milk (no cheese). The starch from the potatoes is the only thickener in this dish.

She’d butter the inside of a Dutch oven and arrange a layer of thick-cut potatoes on the bottom. Sprinkle on a bit of flour, and season with a little salt and pepper. She’d continue this way until the Dutch oven was about 2/3 to 3/4 full (be sure to leave enough room at the top so it doesn’t bubble over), add enough milk to come just under the level of potatoes, put the lid on the Dutch oven, and cook it at 350F until the potatoes were tender, about 1 hour.

Sometimes she’d layer ham steak in with the potatoes and serve it along with buttered green beans or another vegetable for a full meal. As an adult, I’ve adopted her method for making scalloped potatoes (minus the ham steak, which was never my favorite). 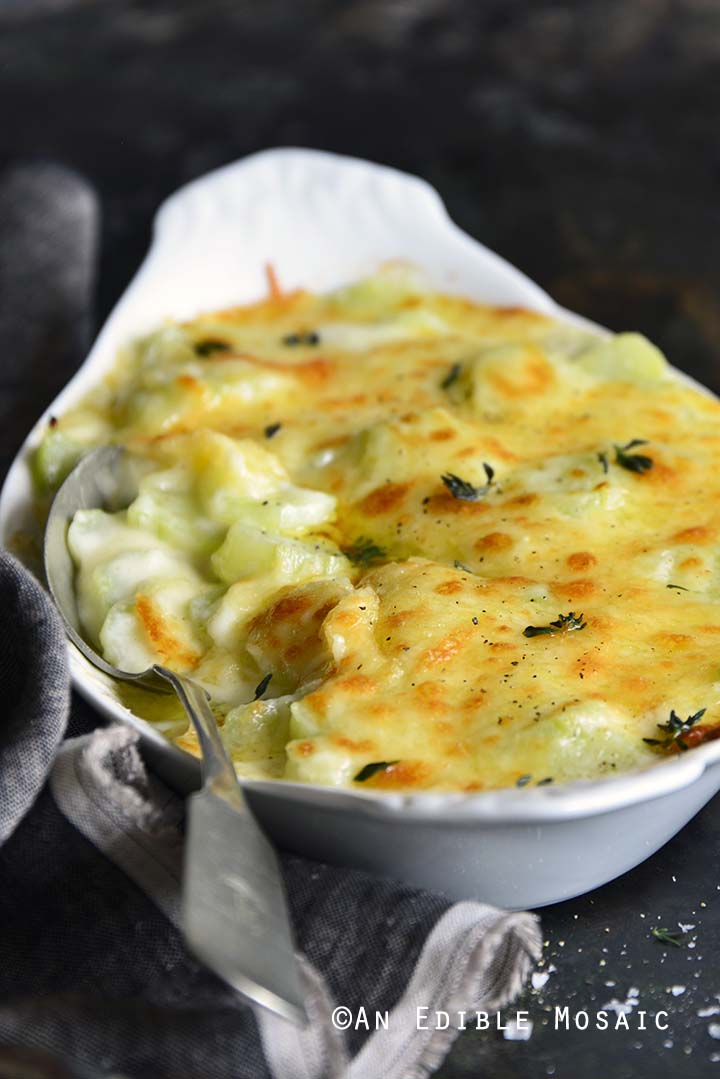 So why broccoli stems in this recipe?, you ask. I can’t tell you how many times I’ve tossed (or watched other people toss) broccoli stems after chopping up the florets to cook. I had no idea they could be eaten! It turns out they can, and they’re delicious. And not only that, but broccoli stems are actually as nutritious as broccoli crowns that get chopped into florets. Just remember to peel the outer layer off broccoli stems before chopping them because it’s a bit tough. And if you’re wondering what broccoli stems taste like – broccoli!

How to Reduce Food Waste

Here are a few other ways you could use up broccoli stems (don’t forget to peel off the outer layer): 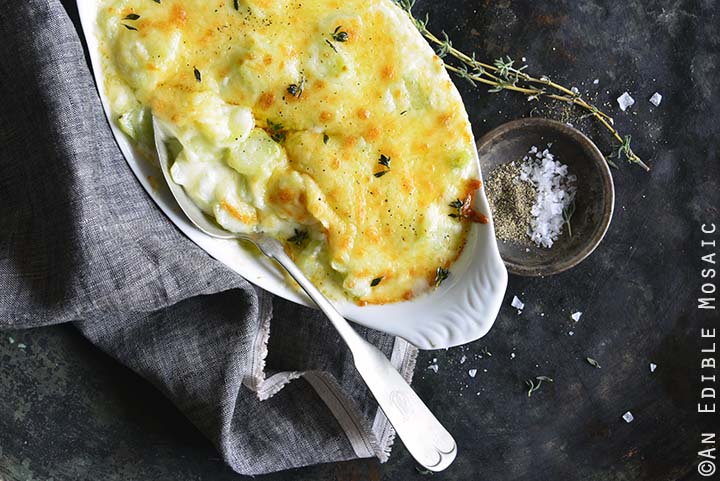 Print
Low-Carb Broccoli Stem Gratin
Author: Faith Gorsky
Prep time:  10 mins
Cook time:  25 mins
Total time:  35 mins
Yield: 6 servings
Low-Carb Broccoli Stem Gratin is everything we love about a good gratin; it’s a rich, creamy, and cheesy side dish that you can pair with any number of things, from roast chicken to grilled steak. And bonus, this version uses broccoli stems so they don’t go to waste!
Ingredients
Instructions
Notes
Cheese: For this recipe, I used Cabot Mac & Cheese Shredded Cheese, which is a mix of Vermont Sharp cheddar and nutty Swiss-like Alpine cheddar, and is perfect in this recipe! If you can’t find it, I recommend using a mix of shredded Gruyère and white cheddar.
3.5.3251