These Patriotic Red White and Blue Blondies are rich and chewy with a slightly gooey center and buttery brown sugar vanilla flavor. They’re festive and fun for Memorial Day, the Fourth of July, or any summer picnic, potluck, or BBQ!

If you’re looking for quick and easy crowd-pleasing treat to make this summer, this is the recipe for you.

Blondies are a fun summer dessert that whip up in less than 45 minutes with just 15 minutes of hands-on prep time. I like to serve them along with a meal of hamburgers and hot dogs or grilled chicken. They’re the perfect treat to add to a dessert table!

And if you want to make these blondies feel extra special, you can serve them slightly warm with a scoop of vanilla ice cream on top. Or take it one step further…

For Memorial Day, the Fourth of July, or any summer gathering, to make dessert even more special, you could set up an ice cream sundae table. Making your own sundaes is so much fun!

Along with these Red White and Blue Blondies, include a couple kinds of ice cream, a few different flavors of syrup (like hot fudge, caramel, etc.), and several toppings (such as sprinkles, chocolate chips, gummy bears, chopped nuts, etc.). And of course don’t forget the whipped cream.

This recipe is quick and easy to bake up. And blondies are always a hit!

How to Make Patriotic Blondies

How to Store Blondies

Store blondies in an airtight container at room temperature for up to 5 days. The flavor and texture is generally best during the first 3 days after making them.

Equipment for This Recipe

What is the Difference Between Blondies and Brownies?

Blondies, which are sometimes called “blonde brownies”, have a vanilla base flavor. On the other hand, brownies have a chocolate base flavor.

However, you can still add chocolate to your blondies! Chocolate chips are a popular addition to blondies.

Are Blondies Supposed to be Gooey in the Middle?

How Do You Know When Blondies Are Done?

The trick to blondies that are rich and gooey, but not undercooked is to know when to pull them out of the oven at just the right time.

Blondies are done cooking when they’re light golden along the outside. The outside should slightly pull away from the pan, and the blondies should puff up slightly.

Pro Tip: The blondies will look a touch undercooked in the middle when they’re done. They’ll continue cooking in the pan even after you remove them from the oven. This is how you’ll get a delicious, slightly gooey center. 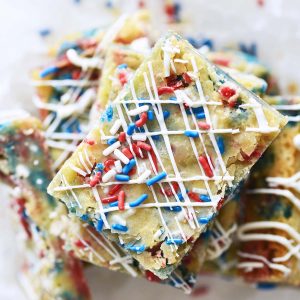