I usually spend Saturday afternoons with my 6-year-old niece.  I take her to the library and then out for a coffee (hot cocoa for her ;) ) and occasionally shopping, and we both have a blast.  She’s so cute, whenever I see her she tells me how many days are left until next Saturday (what she calls our “girls’ day out”).  A couple weeks ago we were at the library (she was playing Miss Spider and I was thumbing through a stack of old cookbooks), when I happened upon a recipe for Welsh Rabbit (also known as Welsh Rarebit).  I’ve heard of Welsh Rabbit before, but I never actually knew exactly what it was.  (I always just assumed it was rabbit stew or something, and since I was not thrilled at the idea of eating bunny I never explored the recipe any further.)  After reading the recipe I was surprised to find that it didn’t include rabbit (or meat of any kind, for that matter) and that it looked absolutely delicious.  Welsh Rabbit is basically fondue on toast.

As part of Foodbuzz’s Tastemaker program, I recently received a coupon for a free carton of Eggland’s Best eggs.  This was nice because Mike and I always buy this brand of eggs (we’ve been exclusively buying this brand for about 2 years now…I would never recommend a product to anyone that I couldn’t personally stand behind).  Compared with other eggs, Eggland’s Best eggs have more vitamins (such as D, B12, and A), less saturated fat, and more Omega 3s.  Honestly though, the reason why Mike and I buy these eggs is because we think they taste much fresher (and there’s nothing worse than the taste – or smell – of eggs that aren’t quite up to par with freshness).

Anyway, as soon as I read the Welsh Rabbit recipe I knew I wanted to make my own variation of it.  I immediately thought of adding a poached egg so the runny yolk could mix with the cheese sauce; I also added a bed of sautéed spinach on top of the toast to help sop up the cheese sauce and yolk (and also to help round out the dish into a meal).  This dish was so good I can’t believe I had written it off just based on the name!  That just goes to show, you can’t judge a recipe by its name.  (Or on its looks…this dish is pretty messy looking, but it’s just as delicious as it is messy!) 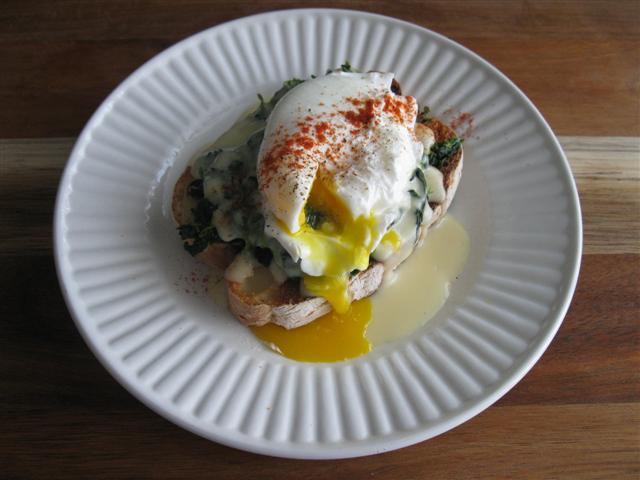 Thaw the spinach, then put it in a clean kitchen towel and wring it out to remove moisture.  Transfer the spinach to a large skillet, season it with a dash of salt and pepper, and cook it over medium-low heat just to warm it throughout (stirring frequently).

In a small saucepan, heat the olive oil on medium-low heat; whisk in the flour and let it cook 1-2 minutes, then whisk in the milk.  Add the Dijon and Worcestershire sauce and bring the mixture up to a simmer.  Let it simmer for about 10 seconds, then turn off the heat and whisk in the cheese.  Season to taste with salt and pepper. 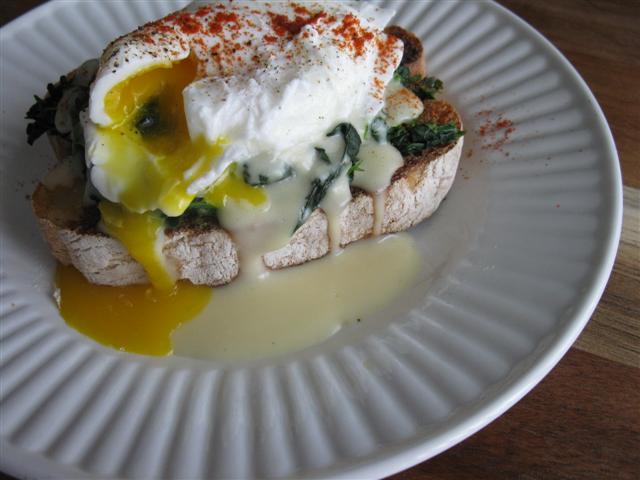 Onto my announcement.  Mike and I are going on vacation to Florida!  My mom is turning 50 this year and my whole family is going there to celebrate.  I’ll be back in about 10 days with a lot to share!  ;)